Biosensors are bioanalytical systems that can sense biological samples. They are small, powerful devices capable of analyzing biological samples to understand their function, composition and structure. This is achieved by converting a biological signal or response to a measurable response.

Biosensor, if you split the word into “bio” and “sensor”, will give a better sense of what they are.

Biosensors are bioanalytical systems that can sense biological samples. They are small, powerful devices capable of analyzing biological samples to understand their function, composition, and structure. This is achieved by converting a biological signal or response to a measurable response.

This technology has several applications not limited to health care. They are vital for drug discovery and disease protection, and can also monitor the quality of the environment, soil, water, and food. They are also used in metabolic engineering, for monitoring the proper functioning of prosthetic devices, and in biodefense.

The first biosensor, known as the “Clark electrode”, was developed to detect oxygen by Leland C. Clark in 1956. His work in the field of biosensing earned him recognition as the “Father of Biosensors”. The first commercial biosensor was developed in the year 1975 by “Yellow Springs Instruments”.

Let’s see how these biosensors work.

General working of a Biosensor

How is the biological component converted to digital information or a measurable response? This is accomplished by the various components present within the biosensor, such as the biological recognition element, a signal transducer, a signal amplifier, a signal processor, and a display unit.

Let’s see what does each of these components does.

When the biological sample (analyte) is applied, the recognition element will detect the biomarkers present in the analyte. A biomarker could be any compound or signal that can be used as a determinant of a disease state or alterations in the physiology of the organism. The transducer will convert this biological change to an electrical signal. This analog signal will be amplified by the signal amplifier. The signal processor will convert the amplified analog signal to a digital signal, which will be displayed on the LCD screen. 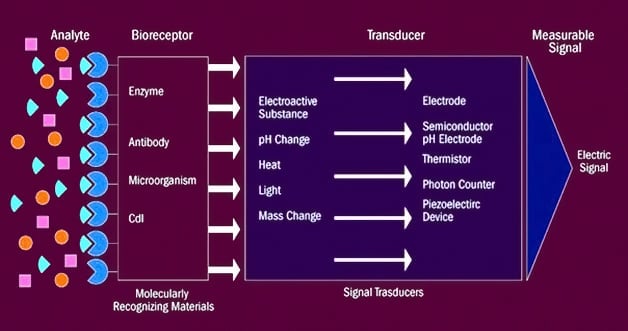 Different components of the biosensor include the bio-element, transducer, amplifier, processor and display unit.

In biomedical diagnosis, the use of biosensors poses several advantages over routine laboratory techniques. as they are small, easy to use, cheap, and provide immediate results.

The performance of any biosensor is based on several key characteristics.

Types of analytes for biosensors

Many people may believe that blood is the only body fluid used for biosensing, but that’s not true. Apart from blood, saliva, sweat, urine, tears, and breath can also be used for the detection of several bio-markers.

Let’s check out some examples.

Blood-based biosensors are used for monitoring blood components like glucose.

Saliva-based biosensors are slowly gaining popularity for glucose detection, as compared to invasive blood-based biosensors. These can also be used to detect levels of certain chemicals, such as lactate and cortisol.

Sweat-based biosensors can detect levels of compounds like glucose, lactate, ascorbic acid, and uric acid, whereas pregnancy kits are a great example of urine-based biosensors.

Tears can be used to estimate the amounts of glucose, alcohol, and certain vitamins, whereas breath-based biosensors are routinely used by police departments to detect traces of alcohol.

Biosensors like the finger-prick glucometers used to check blood sugar levels require the user to prick their finger and use the blood sample as the biological analyte. This is an example of an invasive biosensor. In contrast, the use of the pulse oximeter requires the user to simply insert their fingertip inside the instrument. This is an example of a noninvasive biosensor.

So, based on how the required biological analyte is applied, the biosensors may be categorized as invasive or non-invasive.

Optical fibers play a key role in the functioning of optical biosensors by sensing the biological analyte based on its property of fluorescence, absorption and scattering of light. They are non-electrical in nature and the measurements are based on the changes in the refractive index.

Electrochemical biosensors are electrical in nature, where the sensing molecule or the recognition element will interact with the sample analyte. The electrical signal produced is often proportional to the concentration of the analyte.

Mass-based biosensors are electrical biosensors where the electrical signals produced are proportional to the mechanical or acoustic (sound) vibrations of the sensing molecules.

The most commonly used biosensors are undoubtedly Glucose-biosensors or glucometers, which are blood or saliva-based, along with pregnancy strip tests, which are urine-based.

The first commercially produced glucose biosensor was made by Yellow Springs Instrument in 1975. Since then, the design and performance of glucose biosensors have undergone drastic advancements.

Comparisons between the first-ever glucometer and the glucometers that are currently used reflect the technological advancements that biosensor technology has gone through.

These advancements were critical to the timely screening, diagnosis, and management of diabetes using blood and saliva.

From a user’s perspective, saliva-based biosensors may be more preferred, as the sample collection is non-invasive (less or no pain), along with improved sensitivity.

The other most commonly used biosensors are pregnancy test strips, which are antibody-based and determine the presence of HCG (human chorionic gonadotropin) from the blood or urine.

The recognition elements are the anti-HCG antibodies, which will agglutinate with the HCG of the blood/urine (if present) and form an agglutination line. The presence of a line indicates a positive test while the lack of the line is a negative test for pregnancy.

The picture clearly gives us an idea about how biosensor technology has advanced with time. The biggest glucometers are the first (1983), with a 2-minute read time, while the smallest hand-held devices with the latest technology (2004) have only a 7-second read time. The pregnant test kits are antibody-based sensors for the detection of HCG, a biomarker for pregnancy. A single line is a negative indicator of pregnancy, while the presence of two lines indicate pregnancy. (Photo Credit : twenty20)

Biosensors represent a powerful integration of biological knowledge and technological advances. They have ubiquitous uses across various disciplines. The method is rapid, specific, easy, cheap to use, and provides faster results with a reduced use of reagents. Biosensor technology has seen a draconian evolution in the past 2-3 decades. The future vision for this industry will be the creation of micro-scale technology to make it smaller and more useful at the same time!