The index of refraction, or refractive index, is a measure of how fast light rays travel through a given medium. Alternatively, it could be said that the refractive index is the measure of the bending of a light ray when passing from one medium to another. Mathematically, it can be represented as a ratio between two different velocities – the velocity of light in vacuum and the velocity of light in a given medium.

You may already know that light is the fastest entity in the universe and that nothing can travel faster than it. While that’s true, it is not completely accurate from a technical standpoint. You see, light is indeed the fastest entity in the universe, but only in a vacuum. In other words, nothing can travel faster than light in a vacuum; in other mediums, however, like water, glass etc., it’s quite possible for other entities to be as fast as – or even faster than – light.

The speed of light depends entirely on the medium through which it’s traveling, and as you can imagine, every medium has a different set of properties, which means that light’s speed in one medium can be assumed to be at least slightly different from another. For instance, the properties of a medium such as air are different from those of another medium, like water. Similarly, water as a medium is quite different from glass as a medium.

Therefore, the speed of light changes when it travels from one medium to another. The moment that a light ray leaves a certain medium and enters a new one, it refracts, i.e., it bends away from its original path. You can actually observe this phenomenon in action in many ways in your everyday life. For example, try putting a pencil in a jar full of water (as shown in the image below).

A pencil placed inside a bowl of water appears bent when viewed from outside.

If you look at the pencil from above, it would look as though the pencil has bent in the water. That happens due to the refraction of light. It occurs because as light rays enter water, they slow down, as the speed of light in water is lower than the speed of light in air. The magnitude of how much a medium refracts a light ray is determined by the index of refraction.

The index of refraction, or refractive index, is a measure of how fast light rays travel through a given medium. Alternatively, it could be said that refractive index is the measure of the bending of a light ray when passing from one medium to another.

As you can imagine, the index of refraction for every medium is different. For instance, the refractive index of air is usually considered to be 1.0003, while for water, it’s 1.333 and so on. The concept of refractive index not only applies in optics (visible light), but also within the entire electromagnetic spectrum, from X-rays to radio waves. In fact, it can also be applied to waves, such as sound waves. 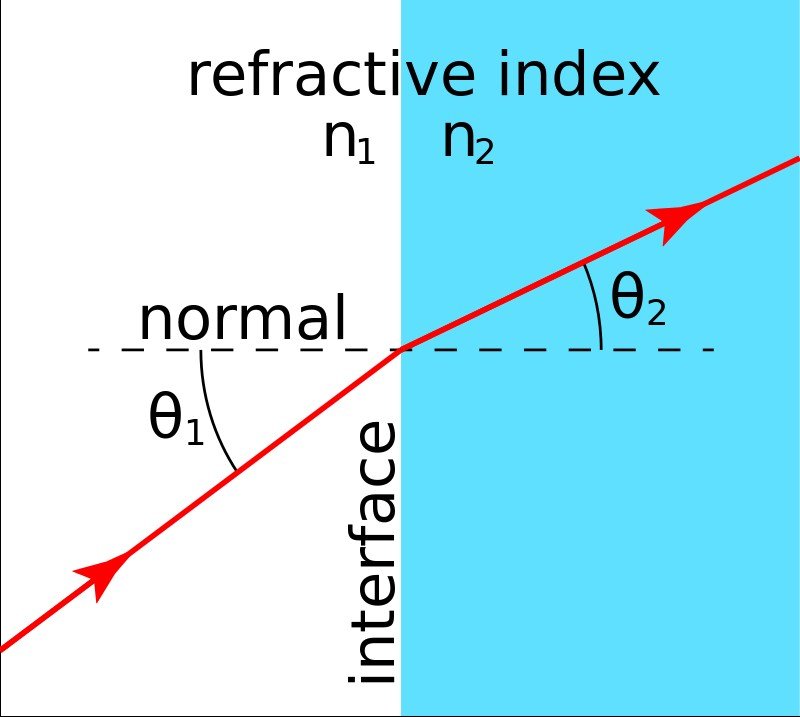 Notice how the light rays bend when they enter a medium with a different refractive index. (Photo Credit : Ulflund/Wikimedia Commons)

For most mediums, the value of the index of refraction is equal to or greater than 1. However, that doesn’t mean that ‘less than unity’ refractive index values do not occur. In fact, recent research has demonstrated that there exist materials with refractive indexes that are negative!

Some of the most commonly used mediums, whose indices of refraction are very well known, are listed in the following table: 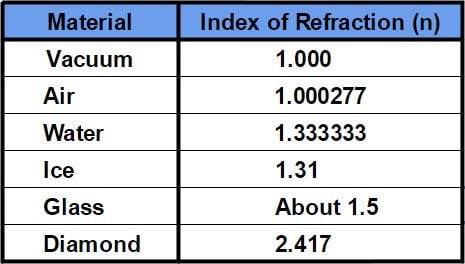 The higher the refractive index of a medium, the more the light slows down in that medium. The index of refraction also dictates how a light ray bends when it exits one medium and enters another. For instance, when a light ray enters a denser medium, such as glass, from a thinner medium, like air, it refracts and bends towards the normal, because it slows down. Similarly, it moves away from the normal when it enters a thinner medium after leaving a denser one.

All in all, the index of refraction is a very important value which tells us a great deal about a given medium and how light interacts in it.