Stephen Hawking used a speech-generating device (SGD) or a voice output communication aid to talk through ‘the computer’. This is a special device that either supplements or replaces speech/writing for people who have problems communicating in a traditional way. Hawking had been using this computer-based communication system made by Intel Corporation since 1997. The entire computer system was replaced every two years to cope with the gradual loss of control over his muscles over time.

Stephen Hawking talked through ‘the computer’, using a speech-generating device (SGD) or a voice output communication aid. This is a special device that either supplements or replaces speech/writing.

Stephen Hawking is a name that is impossible to ignore, at least if you’re a human from Earth. Although, to be fair, I’m willing to bet that aliens also know a thing or two about him.

To give a bit of quick background, Steven Hawking was a British cosmologist and physicist most famously known for his notable scientific works regarding the theoretical prediction of radiation emission from black holes (Hawking radiation), Penrose–Hawking theorems, the general theory of relativity and quantum mechanics. He also authored A Brief History of Time, a popular bestseller that discusses the Big Bang and black holes.

Apart from these accomplishments, there’s one more and a rather unfortunate thing that he was commonly known for: he had amyotrophic lateral sclerosis (ALS). Also referred to as motor neuron disease in some countries, it involves the death of neurons in a patient’s brain. It results in muscle twitching and a gradual deterioration of muscles that leads to difficulty swallowing, speaking and eventually breathing. 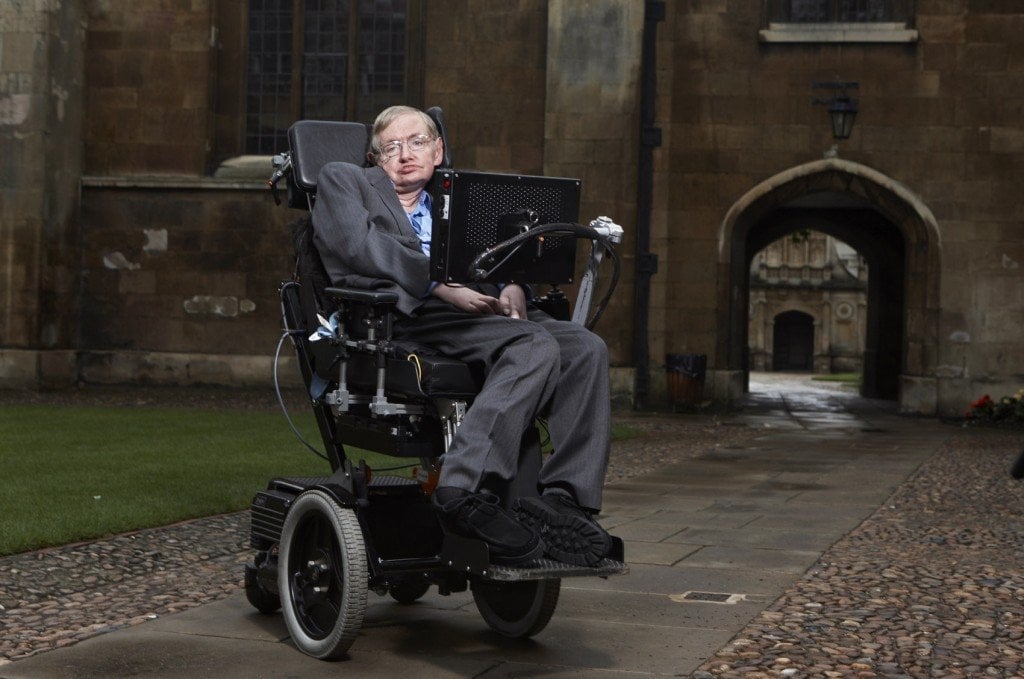 Therefore, Hawking used a number of gadgets to give lectures and communicate with people, since he no longer had the ability to speak as most people do. You have almost certainly seen him in photographs and footage sitting in a wheelchair with a few different machines attached to it.

Let’s check out some different parts of the machinery and explore how they helped Hawking disseminate his brilliance through words to the entire world. 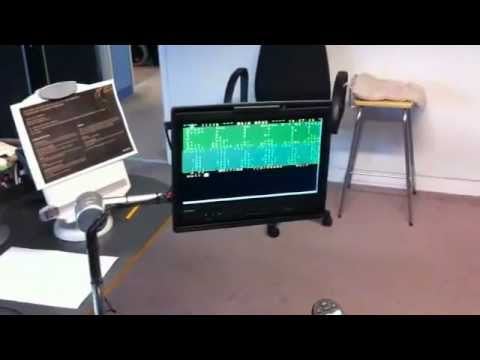 The machine that enables Stephen Hawking to communicate

What Hawking used to communicate is aptly named a speech-generating device (SGD) or a voice output communication aid. This is a special device that either supplements or replaces speech/writing for people who have problems communicating in a traditional way.

Hawking had been using this computer-based communication system made by Intel Corporation since 1997. The entire computer system was replaced every two years to cope with the gradual loss of control over his muscles over time. Hawking had actually written a small post titled ‘The Computer’, where he briefly talked about the tools that helped him communicate. You can check it out here.

Intel had released Hawking’s speech system, i.e., Assistive Context-Aware Toolkit, as open-source code for the general public to make tweaks and tinker with so that it can become more suitable for a wider range of communicative disabilities.

Feeding the Information Into the Machine

Hawking’s communication system had three major components. First was the input, which also happened to be the most challenging element in Hawking’s case. Like many other ALS patients, he had little control over his muscles, which means that he couldn’t just type out words or click some buttons (which, by the way, he was able to do when his condition was better initially) to input the information. He needed a different, more sophisticated way to feed information into the computer. 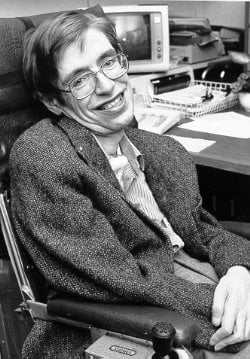 Hawking used a clicker when his health condition was better (Image Source: Wikipedia)

This was achieved by an infrared switch mounted on his spectacles that caught the slightest twitches or movements in his cheek. When his condition was better earlier in his life, he used to press a clicker using his thumb for input. However, he eventually lost control of the nerves that controlled his thumb muscles, and had to use other methods of input, hence the infrared switch that traced movements in his cheek.

The next part involves forming words using the input from the infrared switch. This interface is a program called EZ Keys, developed by Words Plus Inc. It provides a software keyboard that’s displayed on a tablet computer and mounted on one arm of his wheelchair, which is powered by the wheelchair batteries. 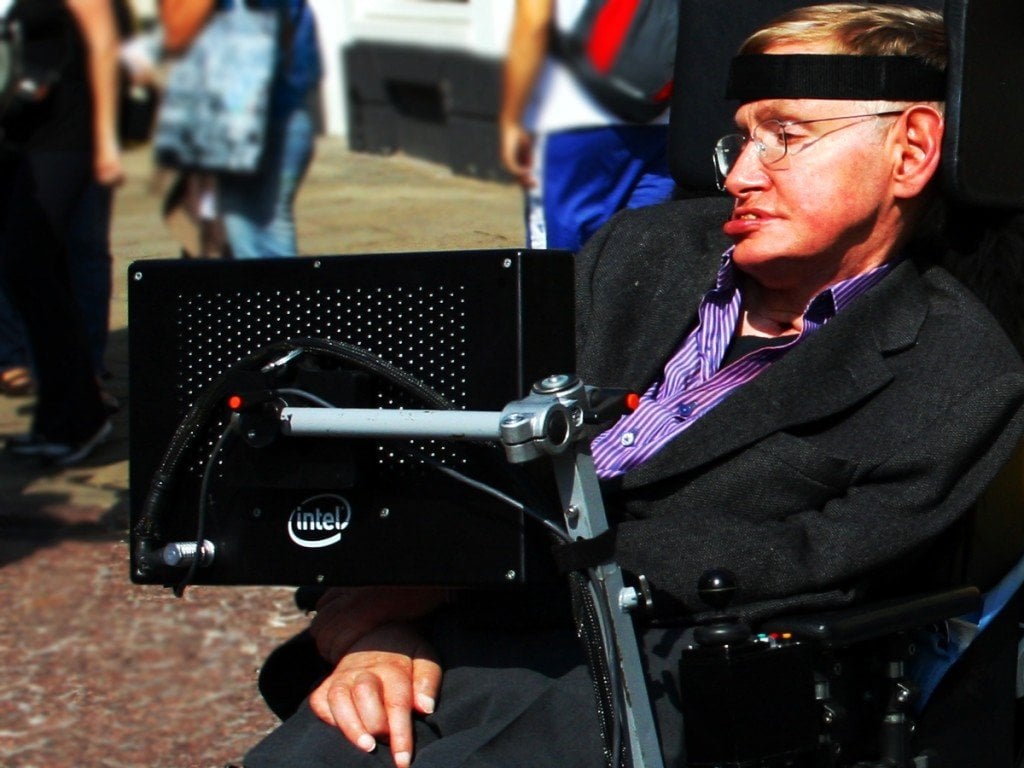 The software moves a cursor across the keyboard by either moving through columns or rows. When it reaches the desired word, Hawking could stop it with a twitch of his cheek. Individual letters were selected in this way to form words and then sentences. Furthermore, EZ Keys also let him move the pointer in the Windows computer that he used.

To make things easier still, the software also included an auto-complete feature – very similar to what we have in smartphones and tablets – that predicts the word without requiring Hawking to complete the spelling of the entire word.

The last part, and probably the easiest one, is speaking the complete sentence out loud. For this, Hawking used a speech synthesizer (developed by Speech+) that spoke the sentence once it had been approved or completed. However, it did have an unmistakable accent, which had been diversely described as American, Scottish or Scandinavian. 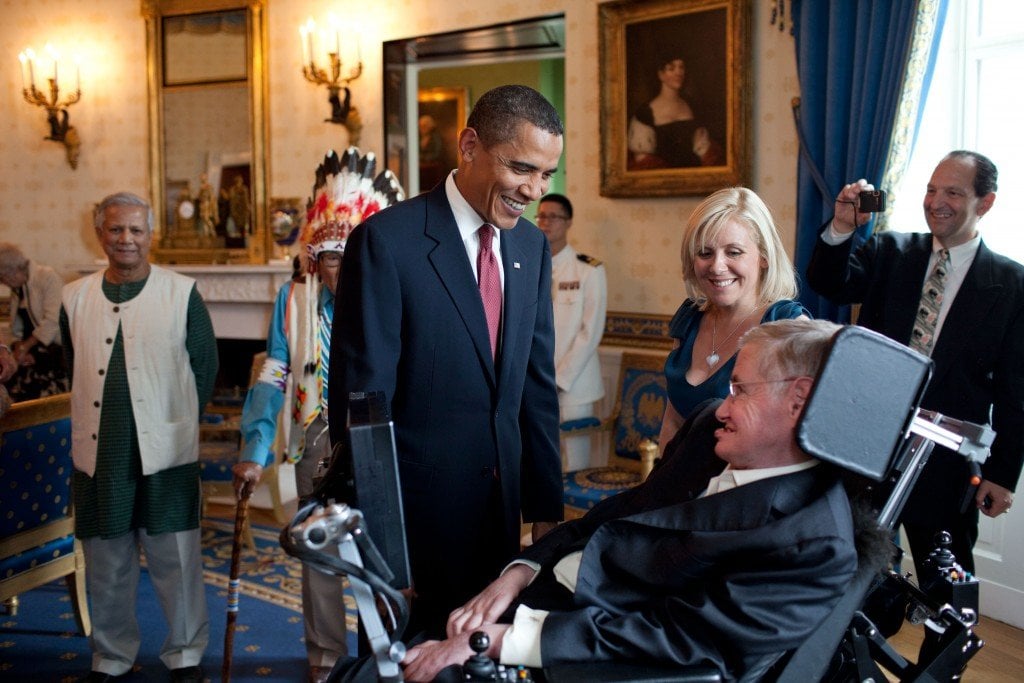 This machine didn’t just let him talk, but also allowed him to do plenty of other tasks as well, including checking his email, browsing the Internet, making notes and using Skype to chat with friends. Intel had a dedicated team of engineers that was working on improving his communication system even further and enhancing the number of tasks he could perform. All in all, Hawking could give lectures and interact with people without much difficulty using this communication system.

Unfortunately, Hawking passed away in the morning of March 14, 2018 in Cambridge, England. He was 76 years old.

Wanna check how much you know about Stephen Hawking?