A temperature gun—a type of infrared thermometer—works by measuring the amount of infrared radiation emitted by an object. The emitted IR radiation is focused onto a thermopile using a lens; the thermopile then converts thermal energy into electrical energy, and finally, these electrical signals are used to determine the temperature of the body.

If you were to head outside right now (though in most parts of the world, you really shouldn’t), chances are high that you will be held at gunpoint. Don’t worry, contrary to other times, this gun might help you survive! 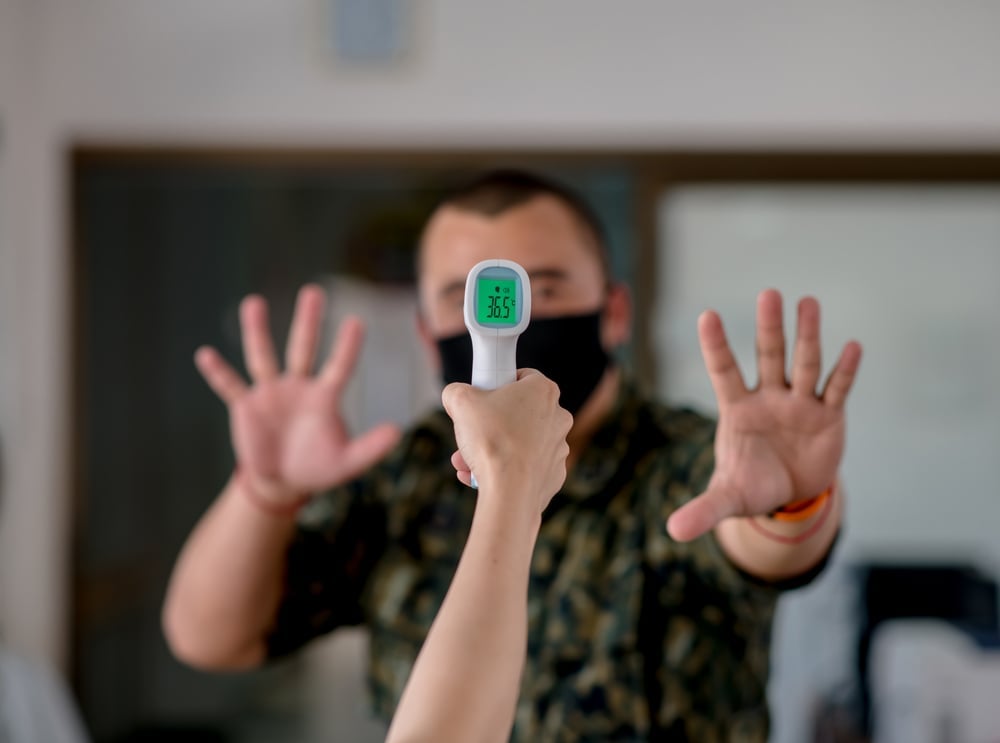 Temperature guns are being utilized at airports to screen passengers, by shopkeepers to check incoming customers, in driveways, and every other possible area, but how do these guns work? Aren’t we supposed to stick a thermometer under our armpits or insert it beneath our tongues to measure our body temperature?

Infrared thermometers take advantage of the fact that all objects, including humans, at a temperature above absolute zero, emit heat in the form of thermal radiation. This is a concept known as black body radiation.

Absolute zero (equivalent to -273.15 degrees Celsius or -460 degrees Fahrenheit) is the lowest possible temperature an object can attain and also a point where atoms exhibit strange and exotic behavior. However, at any temperature above absolute zero, atoms are in a constant state of motion and possess kinetic energy. The higher the temperature, the more kinetic energy the atoms/molecules possess. When the electrons in these excited atoms jump from one orbit (energy state) to another or when two excited molecules collide, energy in the form of electromagnetic radiation is emitted. This kind of electromagnetic radiation, emitted solely by the kinetic energy and movement of particles in matter, is classified as thermal radiation.

The sun, for example, resides at a temperature close to 5,600 Celsius and emits most of its thermal radiation as visible light. Humans and all animals, on the other hand, emit infrared radiation that lies just beneath visible light in the electromagnetic spectrum. 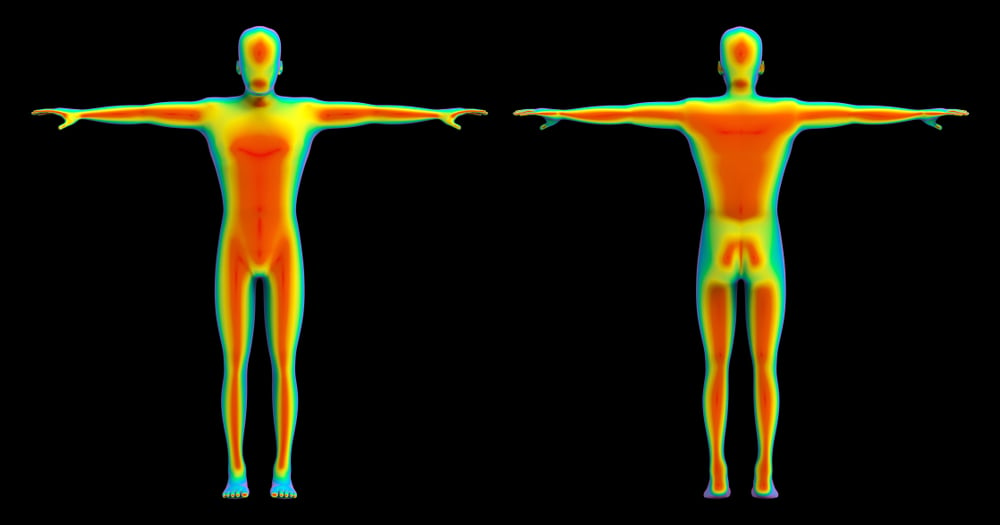 A thermal map of the human body created based on infrared radiation. (Photo Credit : PATARA/Shutterstock)

The knowledge of infrared radiation being emitted by humans and animals has mostly been employed for thermal imaging. An infrared thermometer takes this a step further and puts a number to the amount of thermal radiation given off. IR thermometers do this by employing the Stefan-Boltzmann law.

The law states, ‘The thermal energy radiated per unit surface area per unit time by a black body is proportional to the fourth power of its absolute temperature’.

Here, E is the radiant energy emitted per unit area per unit time and T is the absolute temperature of the object.

Upon removing the sign of proportionality, a constant term known as the Stefan–Boltzmann constant (σ = 5.67 x 10 –8  Wm –2K –4) gets added to the formula.

The above equation relates radiant energy to the temperature of a black body, a body/object that absorbs all radiation incident at it. However, a perfect black body doesn’t exist yet (although Vantablack comes pretty close), so the above equation must be adjusted for all other regular objects.

How A Temperature Gun Works

A typical infrared thermometer has the following parts—a laser, a converging lens, an IR sensor (thermopile), an ambient/reference temperature sensor, an amplifier, and other electronic components to convert and display the results in numeric values.

Components of an infrared thermometer

When you point the temperature gun at something or someone and shoot, a laser is discharged from the thermometer. The laser, however, doesn’t have any functional use, nor is it the thing that actually measures the temperature. The laser is only present to help accurately pin-point/aim at the object to be measured.

Infrared radiation, like visible light, can be reflected, absorbed, and concentrated. Thus, IR radiation emitted by an object or a human is first focused onto the thermopile inside the temperature gun using a converging (convex) lens. Next is a thermopile, an electronic device that converts thermal energy into electrical energy. The thermopile is made by stacking several thermocouples in either a series or parallel configuration.

The temperature of the thermopile increases with the amount of radiation incident on it. However, the opposite side (the one facing the other side of the gun) of the thermopile stays at a slightly lower temperature, as infrared radiation is not directly incident on it. This difference in temperature leads to the development of a voltage difference, and thus electricity (thermoelectric effect). The electrical reading is then amplified using an amplifier.

Ultimately, the electrical reading is passed through to a typical data acquisition circuit and the final temperature reading is displayed on an LED panel in Celsius or Kelvin.

An ambient sensor present near the thermopile helps compensate for any thermal radiation entering the temperature gun from the atmosphere itself.

An optical chopper is another component that is often incorporated in temperature guns. An electric motor drives the optical chopper and helps the thermopile receive radiation on two different wavelengths. They also consist of various emissivity settings to help check the temperature of different objects. IR thermometers are characterized based on their distance-to-spot ratios (D:S) and, obviously, this number represents the ratio of the size of the spot/area being measured to the distance of the thermometer from the spot. The greater the D:S ratio, the greater the range and accuracy of the IR thermometer.

A temperature gun finds extensive use in various industries. It is primarily used by firefighters to check for hot spots while extinguishing a fire, in manufacturing and electronic industries to monitor machine temperatures, the performance of heating/cooling systems, insulation systems, car engines, inspecting electric panels and other temperature-sensitive electric parts, etc. An IR thermometer can also be used to ensure food safety by monitoring heater/oven temperature and food temperature, as well as in agriculture to monitor plant and soil temperature, among other things.

The most important application of a temperature gun in recent times has been for public safety. Temperature guns allow for easier, faster, and more secure temperature checks of a greater number of people in places like airports. They have previously been employed to check travelers for fever during epidemic events like Ebola and SARS. Now, the technology is being used to verify potential cases of COVID-19. 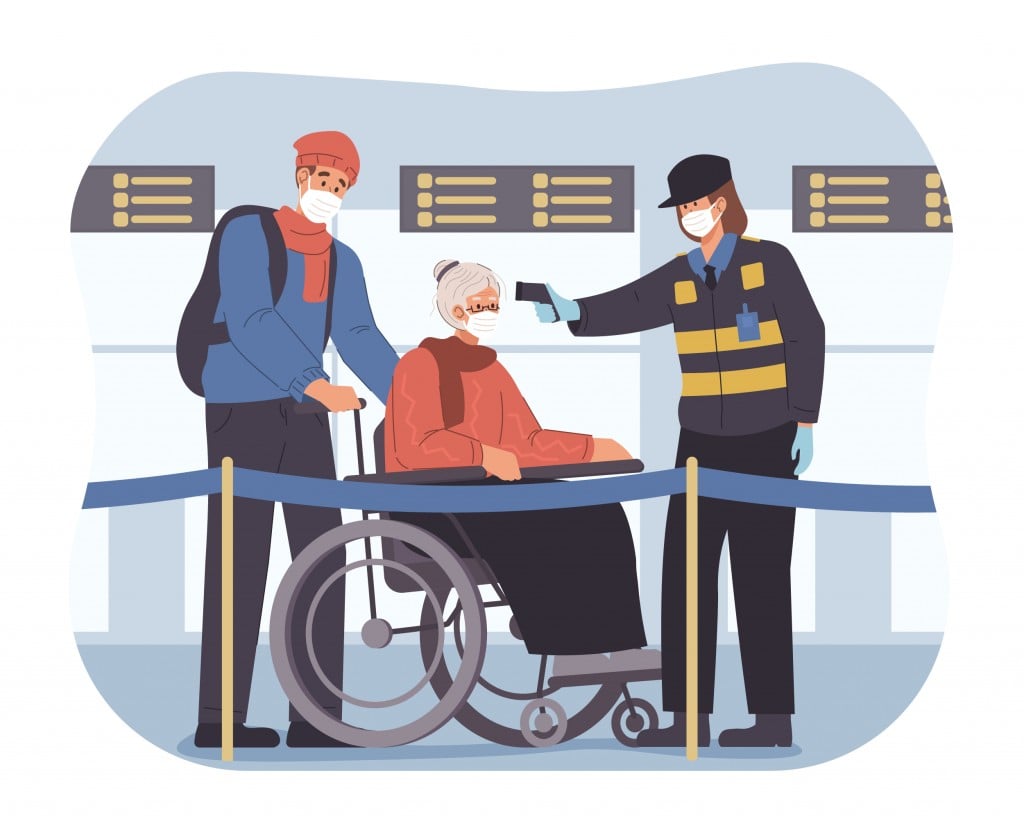 Using a temperature gun reduces the risk of cross-contamination and spreading disease due to its non-contact approach. Also, the temperature readings are obtained at a much quicker pace than traditional methods. However, a temperature gun should only be used to screen patients, not diagnose them.

Also Read: Why Is Mercury Used In Thermometers?

The temperature reading displayed by an IR thermometer is affected by a variety of factors. This includes how and where the IR thermometer is used and its calibration. Important points to consider include positioning of the laser on the forehead, ensuring the body and forehead temperature hasn’t been influenced due to excessive clothing or use of head covers, like caps or facial cosmetics, or the environment (i.e., do not take readings in direct sunlight).

While the accuracy of temperature guns has always been up for debate, given the current scenario (the volume of temperature measurements, the number of bodies to be screened, and the high risk of contamination), the use of a slightly inaccurate but non-invasive technology like a temperature gun over more accurate but invasive methods seems essential!