A tower crane is a fixed crane capable of hauling heavy loads to precarious heights.

As the world metamorphoses into an urban jungle, buildings seem to be competing to rise higher than each other.

However, something mundane—yet fascinating!—rises even higher than the highest building one has ever seen, only to disappear once its work is done.

We hardly spare a moment’s glance, let alone any time to understand how they work. So today, let’s do just that.

What Is A Crane? 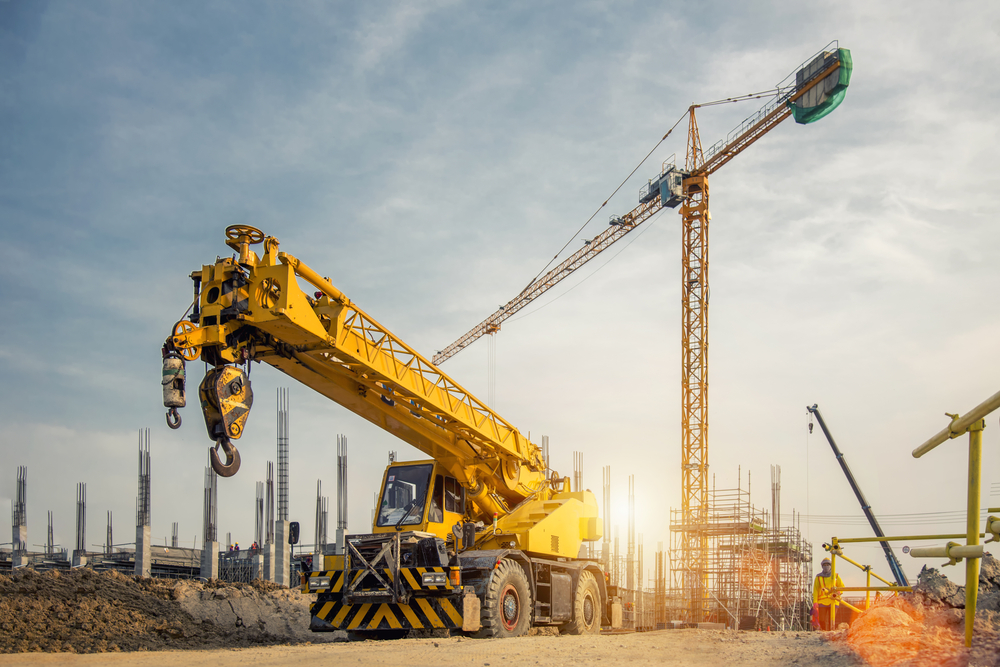 A crane is a machine that is capable of lifting heavy goods to great heights with little human assistance. Depending on the nature of the project, cranes can either be fixed or mobile. Fixed cranes, as their name suggests, remain on-site for the duration of the project and must be dismantled before shifting to another location. Common types of fixed cranes include tower cranes and overhead cranes.

Mobile cranes, on the other hand, are usually mounted on movable platforms that may either be manually operated or motorized. They often have telescopic booms that extend to increase their reach. However, their load-bearing capacities are less than their fixed counterpart equivalents.

What Is A Tower Crane?

A tower crane is an inverted L-shaped structure that is capable of lifting several tons of weight to precarious heights.

The most striking feature of this crane is that it is self-building and can allow a building to be constructed adjacent to or even around it.

Components Of A Tower Crane 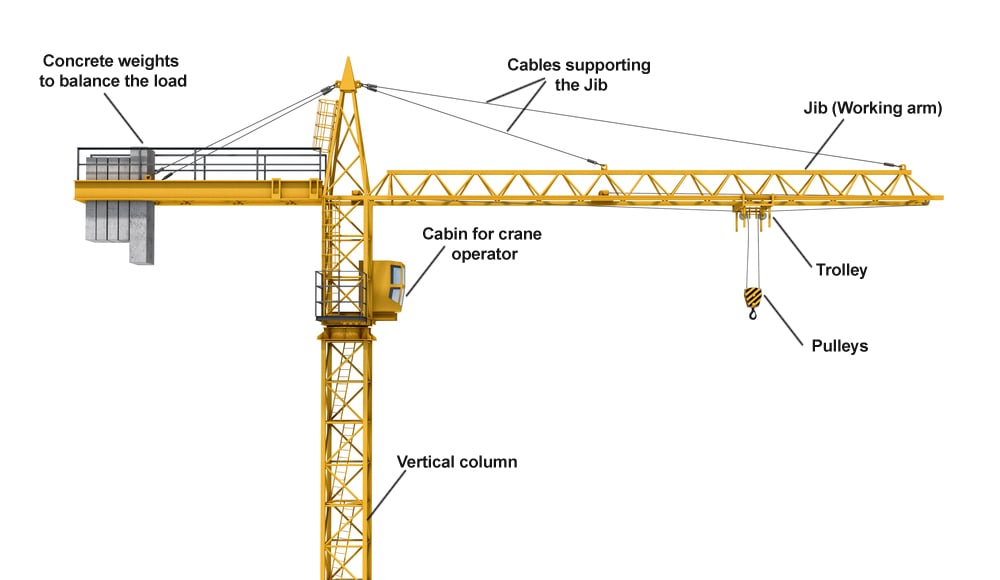 Components of a tower crane

Despite being able to lift a lot of weight, a tower crane is extremely simple in both its construction and operation. It is comprised of the following parts:

This is the most crucial part of the crane that supports the entire structure. It is made of concrete that has been poured a few weeks before the crane assembly commences. The crane is anchored to this base.

The mast refers to the truss-shaped columns that give the crane its working height. Instead of being one continuous column, they are designed to be bolted to each other and other crane components. The concrete base and the mast columns impart stability to the crane and prevent it from toppling over.

The slewing unit comprises a gear and motor arrangement, enabling the crane to rotate.

Also known as the jib, this extends perpendicular to the mast, and houses the hook and trolley that lift the load.

Also Read: What Are Cell Towers And How Do They Work?

Also known as the counter jib, this houses the counterweights and pulleys that balance the crane.

The hook is the main load-bearing component that hauls loads. It is attached to a trolley that allows the hook to raise and lower, as well as move towards and away from the mast. This is done with the help of cables and pulleys attached to the trolley.

This is the control center of the crane and is attached to the slewing unit. In order to get to the cab, the operator must climb a series of ladders within the mast.

How Does A Tower Crane Work?

The working principle of a tower crane is surprisingly simple. It is designed in such a manner that all overturning forces are counteracted by the concrete pad and the counterweights hanging off the machinery arm.

An unloaded crane, therefore, is slightly unbalanced by counter weights and becomes stable only when hauling loads. Loads are pulled by means of a winch attached to the trolley with steel cables. 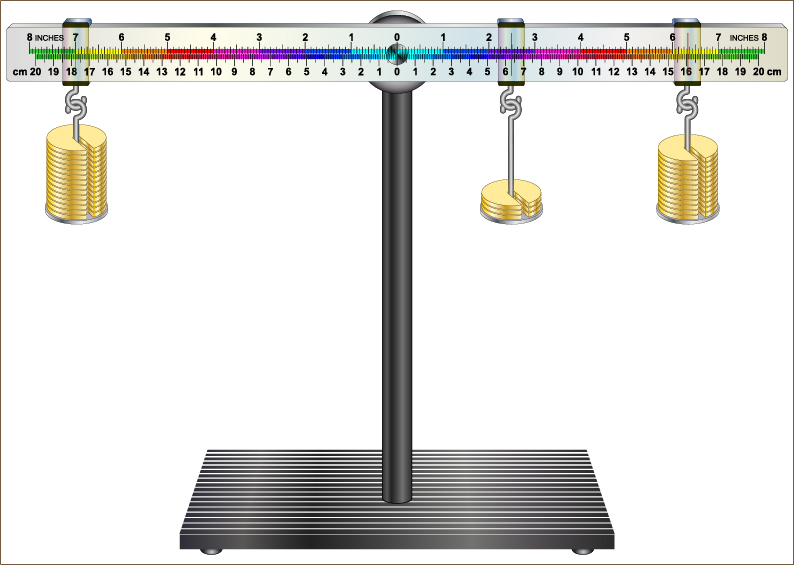 A tower crane works on the simple principle of equilibrium of moment of inertia (Photo Credit : Fouad A. Saad/Shutterstock)

The distance from the mast at which the load is hauled affects the crane’s stability, due to the generation of overturning forces. In order to minimize these forces, heavier loads are lifted closer to the mast, as compared to lighter loads.

In order to prevent the crane from overloading, the crane is equipped with a maximum load limit and a load-moment limit switch. These switches measure the amount of ‘collapse’ and alert the operator when the threshold is exceeded.

How Does A Tower Crane Build Itself?

Tower cranes are usually assembled up to a certain height by means of mobile cranes. Since the reach of a mobile crane is limited, a tower crane is equipped to build itself by adding columns to its mast. In order to achieve this, a climbing frame is bolted around the top section of the mast. The slewing unit and all components above are then unbolted from the mast and fixed to the climbing frame, which elevates those using large hydraulic rams.

The gap now opened is used to fit another column, which has been pulled into position by means of the crane itself. When the crane is to be disassembled, the process is reversed.

Cranes that are built adjacent to construction sites use the concrete base as support. They also need additional columns to raise themselves. However, some cranes are built in elevator shafts and utilize the building as the support itself. In such cases, they can unbolt the lower sections and use them to build themselves as the construction progresses.

The load rating of a crane can be understood by the 300 to-meter limit. The overturning force on the crane, also known as the moment of force, is calculated by multiplying the load to its distance from the mast. Thus, a 10-tonne load can be held no more than 30m away, and heavier loads must be hauled even closer. A tower crane can safely hoist up to 19.8 tons of weight against a counterweight of 20 tons.

A Note On Various Types Of Tower Cranes 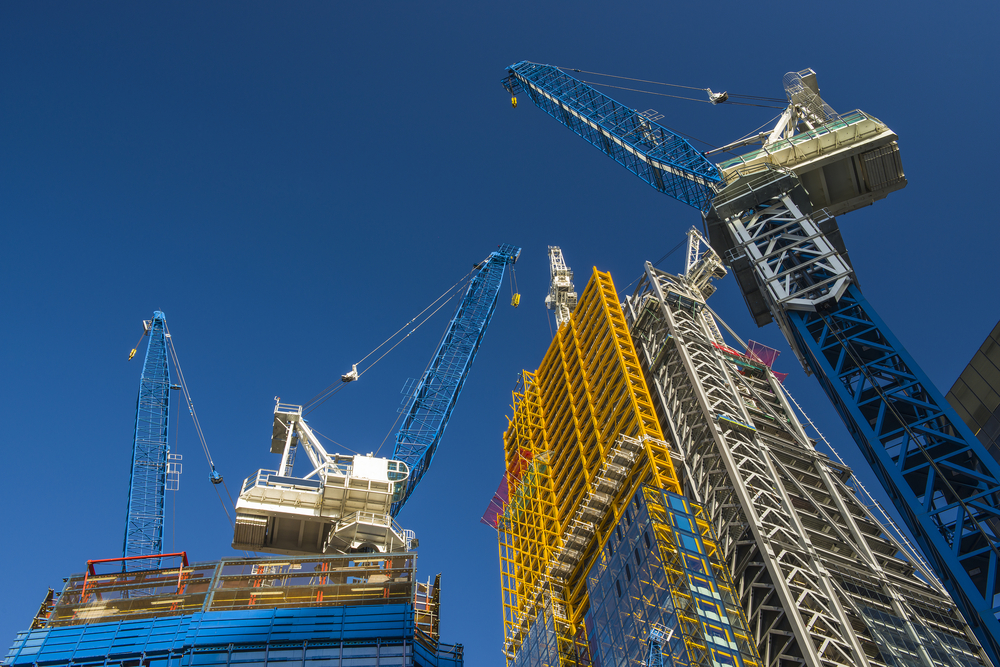 Also Read: Why Are Elevators Safer Than You Thought?

While the working principle of tower cranes remains the same across all their types, their design has been compacted to suit the lack of operational space. Luffing cranes are designed with jibs that can be raised at an angle to reduce the slewing radius. Derrick cranes are designed to fit on rooftops and do not require tall masts to support them. Traveling tower cranes are mounted on rails that enable them to move laterally. Their load-bearing capacities are, however, lower than the traditional, horizontal jib tower cranes.

With advancements in technology and improvement of materials, cranes have become even safer and more compact. As high rises increase their presence on skylines around the world, this vast variety of cranes has become an indispensable part of our lives.