Yes, it is possible to build an elevator to space, but it would be an enormous undertaking that would require advances in technology that we don’t have yet.

Over the last century, humans have done some rather amazing things. After the Wright brothers invented the first airplane in 1903, it took us only 66 years to send a man to the moon. Our engineering and scientific capabilities are clearly impressive, but perhaps it’s time we took a look at the challenges beyond anything previously imagined… maybe it’s finally time for a space elevator.

What Is A Space Elevator?

The concept of a space elevator was first theorized in 1895 by Konstantin Tsiolovsky, the same gentleman who came up with the famous “Rocket Equation”, which helped send rockets into space (basically, his contribution to the space endeavor is enormous). Tsiolovsky’s space elevator concept was inspired by the Eiffel Tower, which was being built at roughly the same time. He wondered if humans could build a tower high enough that its tip would extend far into space, so that instead of launching rockets to get there, we could simply hop aboard an elevator aboard this ridiculously tall structure and transcend the barrier of gravity to reach the stars! 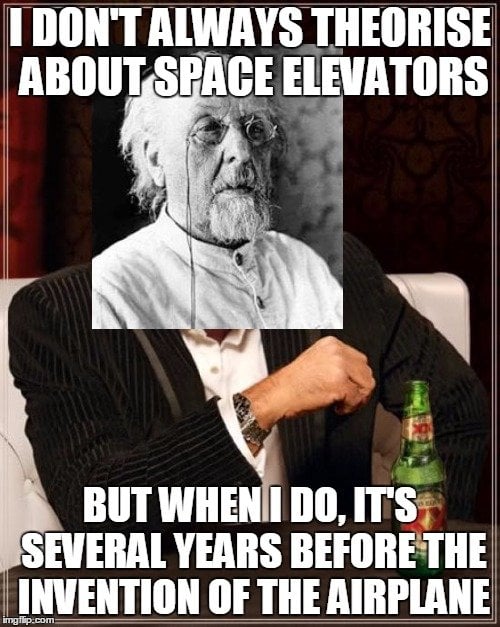 At present, the tallest building in the world is the Burj Khalifa in Dubai, standing boldly at 829.8 m (2,722 ft). It holds the record as the tallest structure ever created by humans, surpassing the previous record of the Warsaw Radio Mast 646.38 m (2,120.7 ft), which actually collapsed during its construction. A feasible space elevator would have to be at least 35,786 km (22,236 mi) tall – the height at which an object reaches Geostationary Orbit around Earth. For comparison, if the Burj Khalifa was the height of a coffee cup (8.25 cm), then a Space Elevator would be 3.56 km tall – over 4.3 times the height of the actual Burj Khalifa!

Geostationary orbit is the height from the surface of the earth at the equator, where the time it takes for the object to complete one orbit is the same as the rotational period of the earth, i.e. one day. What this essentially means is that, if you were in geostationary orbit in a spacecraft directly above a point on Earth (let’s say Pontianak, Indonesia, which is directly on the equator), you would never move relative to that point. Therefore, the city would always remain right below you if you looked down and would never move relative to you if you stayed in orbit.

What Would A Space Elevator Be Made Of?

Remember that 36,000 km (to reach Geostationary Orbit) is the minimum height we would need to reach for a space elevator to even function. However, the centre of mass would need to be at the Geostationary orbit height; any lower and the system would become unstable. Ideally, the space elevator would be around 100,000km (62,000 mi) tall. Think about that for a moment… the distance we’re talking about covering is practically 1/3rd the distance to the moon! At that distance, we would have to start building most of the elevator in space, along with several large spaceships and thousands of people working to construct the tower in zero-gravity. 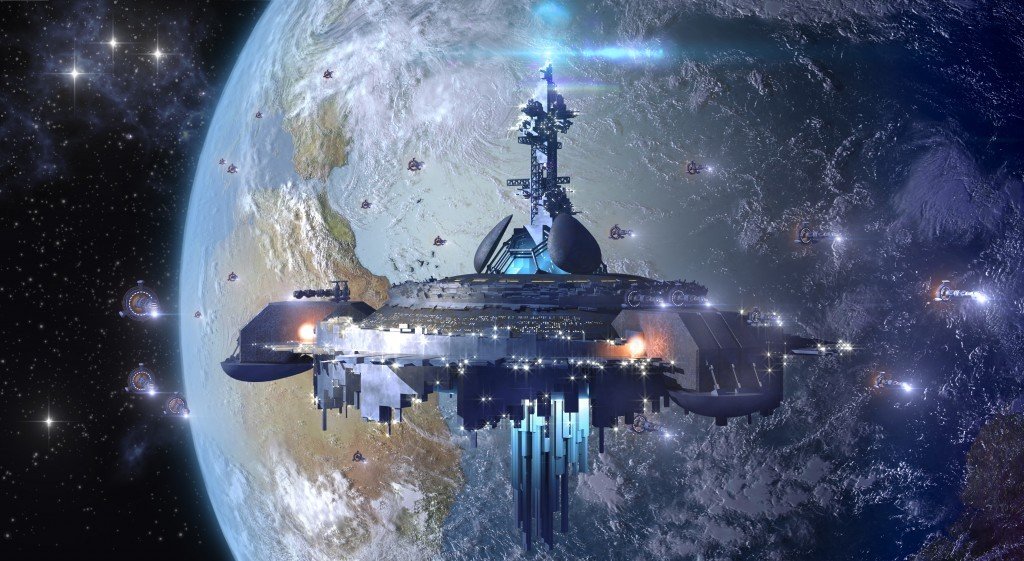 Another way to do it would be to launch a giant spool of ribbon into geostationary orbit and then drop it down towards the earth, while another spool was released upwards (away from the earth) to counteract the force and stay in orbit. The original craft would stay in geostationary orbit and have long cables extending out in both directions. This idea seems like something straight out of a sci-fi novel, and it might as well be; the engineering and materials technology required for that sort of undertaking is much more advanced than we’re capable of currently. 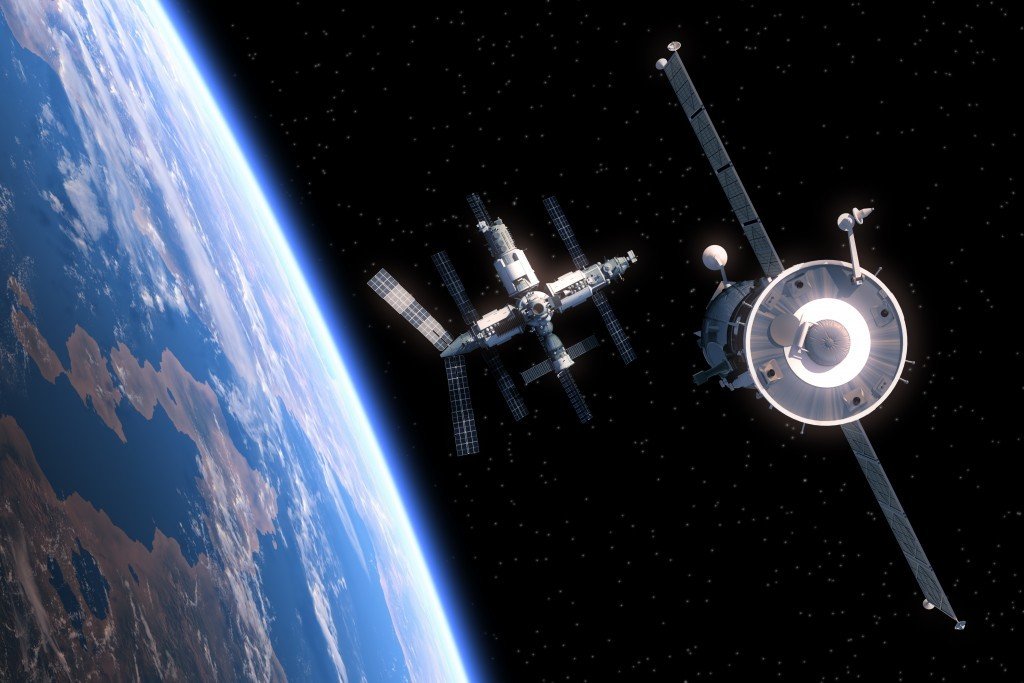 A space elevator needs extremely high tensile strength to counteract the gravity that would be pulling this colossal 100,000km structure down, as well as the centrifugal force and inertia of the counterweight (we’ll get to that in a bit) that would be pulling it up. It needs to remain stable and functional in extreme heat and cold, unpredictable forces from the atmosphere and radiation from outer space. On top of all that, it would have to survive micro-meteorites and particles from solar wind striking against it constantly. Does a substance that can tick the boxes on all those requirements actually exist? We think that carbon nanotubes might be the answer.

Carbon nanotubes are nano-engineered cylindrical carbon structures; we don’t find them naturally and they’re very difficult to create. They’re the stiffest and strongest substances discovered to date and they exhibit very high tensile strength, making them precisely the kind of stuff we need for a space elevator. They’re also electrically conductive, so we wouldn’t have to run additional wires to power the climber or the elevator.

However, even with its enormous strength, a carbon nanotube cable will only be able to support about 5000 to 7000 km of its own weight before shattering – far less than the 100,000 km the space elevator would need. That being said, advances in technology might eventually allow us to reach the stage where it’s feasible to produce the right material, or manipulate the materials we already have.

A space elevator will also need a counterweight at the top. In other words, the elevator will have to be attached to something very heavy, just as it’s attached to the earth at the bottom. The taller you build the elevator, the lighter this counterweight needs to be, in order to cancel out the additional mass that you’re adding to the cable itself. The counterweight is necessary to ensure that the mass above the height of Geostationary orbit and the mass below it remains roughly the same; therefore, the centrifugal force pulling the system upwards is equal to the gravity of it pulling downwards.

If we build a space elevator with a minimum height of 35,786 km (22,236 mi), the counterweight would need to be HUGE…. 1/3rd the size of the moon kind of huge. One way to do this would be to capture an asteroid and bring it into orbit around the planet, at which point we could build the elevator to it. If humanity’s great engineers had been around 65 million years ago, maybe the asteroid that wiped out the dinosaurs could have been used to build space elevators…

If your elevator is more than 50,000km tall, the tip of it would be traveling so fast around the planet that it would reach something known as escape velocity – the speed past which you will fly out of orbit around Earth. At that point, you could simply jump out of the elevator and reach the moon, although your orbital calculations would have to be impressively precise to avoid floating away into nothingness. With an elevator stretching to 100,00 km, you would have enough velocity to plan a trip to Jupiter if the stars (or planets, rather) align.

If It’s So Hard, Why Build A Space Elevator At All?

All these problems seem to come with very little payoff. Given the physical, scientific and economic limits, it seems practically impossible to build a space elevator. Furthermore, is it even necessary? We’re already able to send stuff to space, and there are people living on the International Space Station (although they’re in Low Earth Orbit at about 450 km, rather than 100,000 km). The answer is cost. Right now, it costs about $10,000 to put one pound (0.45kg) of payload into orbit around Earth; that cost would be a lot more for interplanetary travel. After building a space elevator, the cost of sending the same payload would be around $90, a 99% cost reduction. 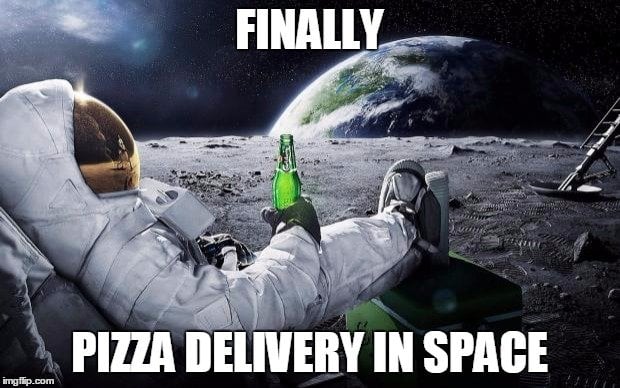 Building a space elevator would be humanity’s most ambitious project to date. It makes the Wright brothers’ achievement seem small in comparison, although no less significant. Humanity always seems to find a way to outdo itself through its engineering prowess. We’re always looking for that next hurdle to overcome, that next challenge to conquer. Perhaps building a space elevator requires technology and manpower that we simply can’t dream of achieving today, but don’t forget that 150 years ago, flying was still a far-fetched dream for the human race. From that perspective, there’s really no telling how close we are to building a 100,000 km elevator to space!