Try to imagine that you’re on vacation. You’re sitting in a chair in a hotel room, looking out the window and thinking about the meaning of life. Suddenly, from out of nowhere, you see a man appear outside the glass window from the outside!

An instinctive yell escapes your mouth, but before you call for help, you realize that it’s not an assassin or a burglar. In fact, it’s just a window washer!

Window washing is a tiresome and time-consuming task, but whether you want to do it or not, it has to be done rather regularly. It may be relatively easy to wash the windows of your house, but it’s a bit more challenging when you’re hanging hundreds of meters above the safety of the ground.

So, how is skyscraper window washing – one of the most dangerous jobs in the world – carried out?

Where Do Fish Come From In New Lakes And Ponds?

Since window cleaners have to work at such great heights, there’s an array of tools and equipment that they have to carry while working on buildings. A typical window cleaner’s equipment consists of a rope protector, a safety rope, a rope-grabbing tool, a descent mechanism, lanyard and suction cups. These tools not only protect workers from any untoward incidents, but also help them clean a building’s facade at a rapid speed with great efficiency.

While working on the facade of a building, the worker is attached to an anchor, which is mounted on the roof. This anchor ensures that the workers can clean windows as they descend vertically. You have probably noticed that window cleaners don’t descend smoothly; they proceed to the next, lower floors in a fashion that appears as though they are ‘dropping’ through each floor one at a time. The height of a single drop – the measurement of one vertical cleaning operation from the roof to the floor below – varies according to the building in question. 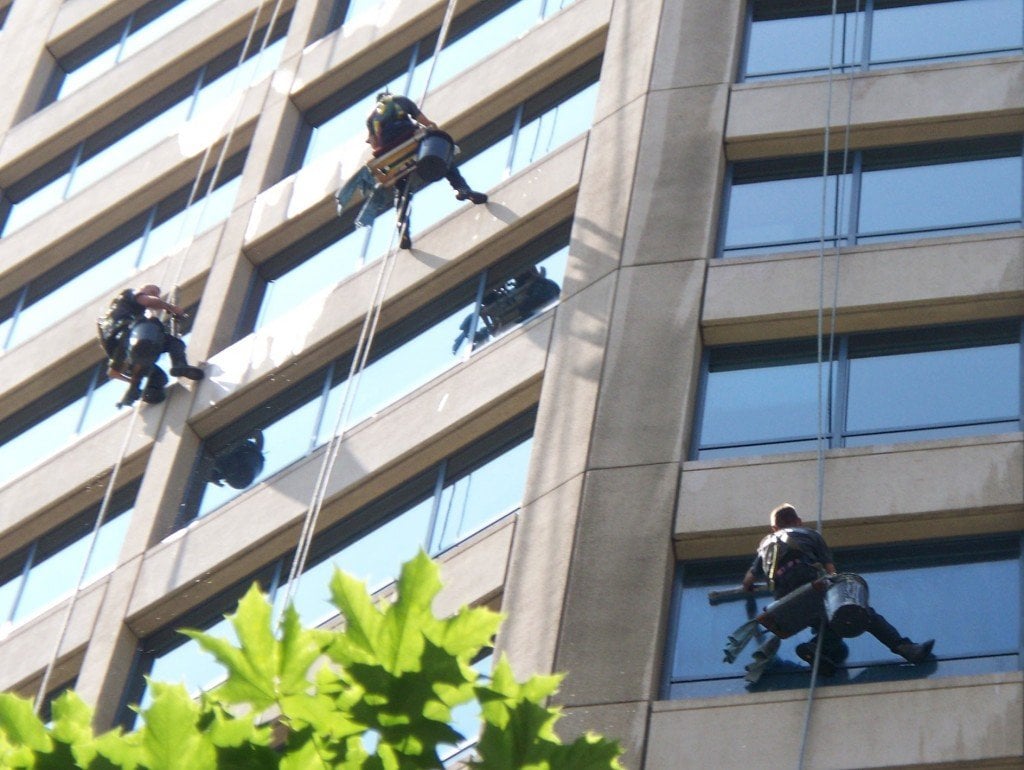 At first, cleaners used to stand on the window ledges and hold onto the frame for support to clean windows. Imagine that! This was obviously not a very safe method to clean the windows of tall buildings, so leather belts were eventually introduced. These belts, attached to anchor bolts, held the worker safely in air. Later still, scaffolds were introduced for even more safety and convenience.

Nowadays, there are different ways in which window cleaning is done based on certain requirements. The type of working mechanism depends entirely on how the work is to be done. The most common window-washing mechanisms are: Bosun’s chair, boom, carriage and portable davit.

Bosun’s chair is a modern invention and is meant for a single washer. It offers access to tight areas of an edifice, while keeping the washer safely seated in a comfortable position. It’s ideal for conditions of prolonged and dedicated window cleaning.

‘Boom’ is the oldest and most commonly used mechanisms historically. It consists of a scaffold that carries multiple washers and therefore allows a group to work simultaneously. Note that this is a permanent system, i.e., it is fixed on the roof of the building to be used as and when required.

‘Carriage’, on the other hand, is a better alternative that is becoming increasingly popular these days. The carriage is mounted atop a rail on the roof, allowing it to move left and right over the facade. Just like a Boom, it not only holds multiple washers at a time, but also offers a clear advantage over a Boom in terms of movement. A Portable davit is the cheapest mechanism among these options; it also enables access to multiple areas of a facade while carrying a group of washers.

It goes without saying that cleaning skyscraper windows is, for obvious reasons, completely unlike cleaning the windows of your room or home. Dusting or cleaning a window in your room only takes a piece of cloth, soapy water and a little motivation. However, when you are doing the same thing on the 100th floor of a building at a dizzying height of more than half a kilometer above the ground, things change… drastically! 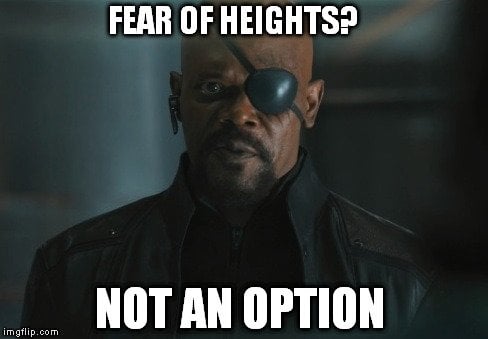 Furthermore, environmental conditions at such great heights are fairly different from what you experience on the ground. Wind, for example, is a pleasant companion when you’re washing one of your windows on a warm, sunny day, but up on the side of a skyscraper, wind generally flows at much higher speeds, which makes it absolutely essential for cleaners to carry the necessary equipment that guards against it.

There is also the risk of certain bugs that thrive at high altitudes; they irritate workers and cause quite a nuisance, which is certainly not a good thing when you’re hanging 100 stories up! Window cleaning, as you can see, is not an easy job. In fact, it is considered to be one of the toughest and most dangerous jobs in the world. Despite all the safety measures, at the end of the day, it all comes down to the cool-headedness of the workers hanging hundreds of meters above ground, making sure that all of those tall, majestic buildings look great in the sunshine!

How much do you know about cleaning of skyscrapers’ windows?