Tugboats are small, powerful boats capable of steering large ships by pulling or pushing them. They are used to assist these ships in places where they are unable to maneuver themselves, such as narrow water channels and ports.

In recent news, a huge shipping container infamously held up maritime traffic in the Suez Canal. As it tried to maneuver through a narrow passage of water, winds caused it to run aground. While excavators were deployed to remove sand around the hull, tugboats were deployed to ‘pull’ the ship back onto course. After a weeklong ordeal, the ship was finally floated again. The tugboats were minuscule in comparison to the 400m long vessel, so how did they manage to accomplish such an impressive feat? Let’s find out! 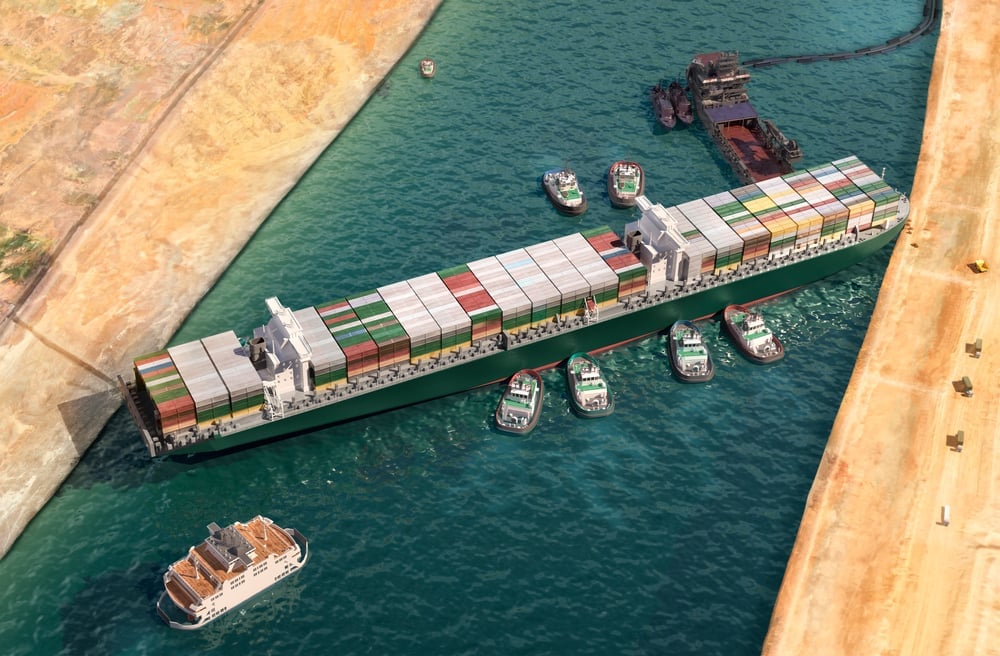 What is a tugboat?

If you’ve ever taken a water ferry, you will appreciate the fact that even when the boats are moored to the bollards at the jerry, they keep bobbing up and down, and sometimes even sway sideways.
Large ships, while stable in the open seas, cannot navigate accurately through shallow waters or narrow channels. Larger vessels berth at ports assisted by tugboats, as unpredictable movement in the water can result in heavy damages (Photo Credit : CANARAN/Shutterstock)

The uncertainty of movement due to water currents in narrow areas, such as harbors and ports, leave little room for course correction. This can cause the ship to collide and result in expensive damage. Thus, small yet extremely powerful boats are deployed to help assist larger vessels. These boats, known as tugs or tugboats, serve several important functions.

How do tugboats work?

Tugboats employ one of three methods to haul vessels many times their size:

Direct towing involves a powerful motor aboard the tugboat, known as a winch. This motor connects to a towing line carried aboard the vessel that is to be pulled. When a stable connection is established, the tug leads the way by pulling the vessel behind it.

In case of indirect towing, tugboats push the larger vessels on their hull, thereby rotating them around their vertical axis and changing their course. Indirect towing can later be accompanied by direct towing. However, if the vessel has been directed sufficiently to be able to propel itself further, there is no need for further towing assistance.

While indirect towing involves pushing only for course correction, certain vessels must be pushed all the way, it being their only means of propulsion. Pushing tugs are often equipped with reinforced hulls and bumpers that fit into a receptacle in the stern of the vessel being pushed.

With buoyancy working in their favor, tugboats do not need much effort to overcome the initial inertia of moving large ships. However, they are strong structures assisted by powerful propulsion systems that are fitted either towards the bow or directly at the stern of the ship.
The propulsion systems found in tugboats come in three types: This system consists of a propeller fan encased in a fix cowl and a movable rudder. This is an extremely low maintenance system found in older tugs. The biggest drawback of this system is that it is unidirectional, making it difficult to change course easily. In addition, the arrangement does not generate enough thrust to handle modern container and cruise ships, which has rendered this obsolete. The propeller is suspended in a rotatable pod that enables tugboats to turn without a rudder (Photo Credit : Tawansak/Shutterstock)

Instead of fixing propeller fans to the hull of the ship, they are fitted to a motorized pod that can be rotated by a horizontal angle, known as the azimuth. By steering the pod, the tugboats can change direction very quickly without the need for a rudder. This makes them agile and more suited to handling container vessels. Voith Schneider propeller, as seen below the hull comprises of a cyclo-rotor, which combines thrust and steering (Photo Credit : Xocolatl /Wikimedia commons)

This is an emerging technology that integrates steering and propulsion in one unit by means of a cyclo-rotating arrangement. A cyclo-rotor is a squirrel cage-like structure with individually rotating blades. Thrust is achieved by changing the speed of the entire rotor, whereas the direction of propulsion can be changed by changing the angle of the blades. This system is less complicated and even more agile than the azimuthal drive propulsion.

Tugboats can be classified broadly into inland tugs and oceangoing tugs.

Inland tugs refer to tugs that operate in relatively shallow waters. They can be classified as follows:

Harbor tugs are responsible for the berthing of large ships in and out of harbors, ports and narrow water channels. These tugboats generally operate by pulling the larger vessels using a steel or synthetic fiber hawser. The flat hull design of river tugs enables them to push large barges at sea, but makes them unsuitable for ocean operations (Photo Credit : KennStilger47/Shutterstock)

As their name suggests, these tugs can either tow or push barges in and around seas. While they are quite powerful and can push multiple barges connected together, their hull design makes them dangerous in oceanic settings.

Ocean tugs are engineered to work in deep sea settings. They can be classified as follows: 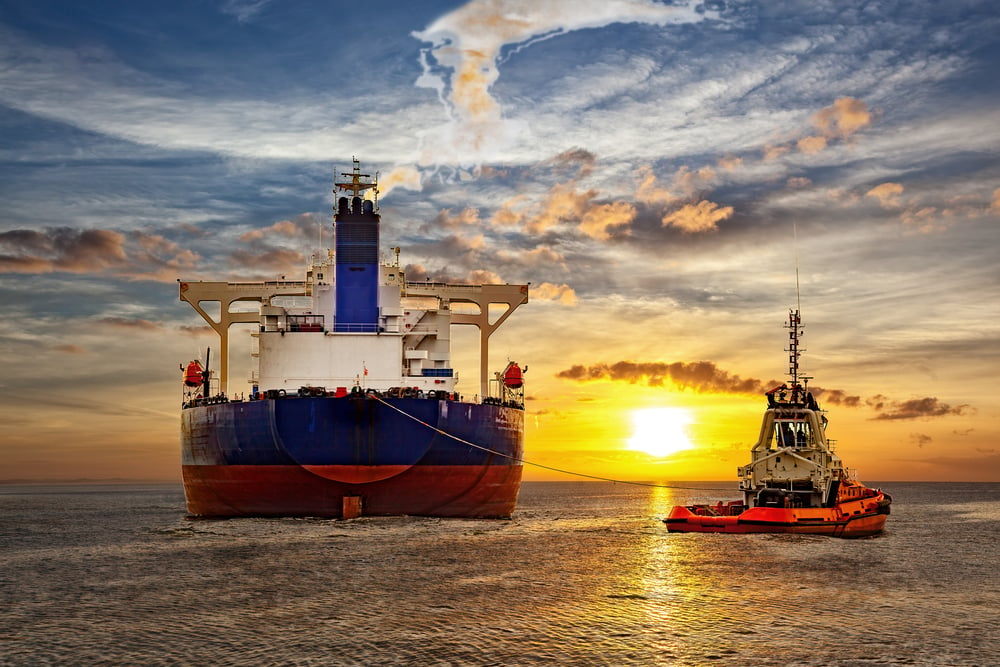 Unlike other ocean tugboats that cater to dumb vessels, conventional tugboats can push or pull all types of vessels. They can do so by either towing or pushing these bigger vessels. Some crafts can even attach to the sides of these vessels. Due to their versatility of application, conventional tugs are most suited to salvage operations. By making a few modifications to their bow and hull, they can also be used for ice-breaking operations. Barge with notch in the stern to accommodate the tug (Photo Credit : Khrushchev Georgy/Shutterstock)

Due to the nature of the payload on barges, it is easier to push, rather than tow them. Barges therefore have a notch in their body that accommodates a dedicated barge tug. These tugs are either independent of, or attached to the barge by means of an articulated mechanism. Some are even integrated with the barge by means of a rigid connection.

A tugboat is not only restricted to guiding large vessels in narrow water channels. It is equipped to serve a variety of functions. Tugs are often equipped with ice-breaking hulls that enable them to navigate through floating sheets of thick ice. Certain tugboats are also outfitted with deluge cannons and other fire suppression systems to help in the case of a fire aboard larger ships. They also act as salvage boats. One important application of tugboats is their utility in the movement of ‘dumb’ vessels. A dumb vessel does not have its own propulsion system. Common dumb vessels include oil barges, platforms, and disabled ships, among others. The powerful engine and string structure of tugboats enables them to ‘tow’ these vessels to their desired locations.

In pursuit of cleaner and more environmentally conscious shipping, internal combustion rigs are now being replaced by electrical equivalents. Electric tugboats, while not so common, are being deployed in ports with environmental constraints. An emerging trend in the maritime industry is autonomous shipping. While this is still in a very nascent stage, it opens up the opportunity for tugboat use in both conventional and hazardous settings.