The battery in an iPhone is typically sealed inside, so the only way to replace it is either by going to an official Apple service center for repairs or trying the more risky route of opening the iPhone all by yourself and voiding the warranty in the process. Even before the introduction of the much awaited iPhone in 2007, the design team at Apple was pretty decisive about abandoning the removable battery design.

Apple, the behemoth of the smartphone industry, has rarely apologized for its tech blunders. And surprisingly, when it did apologize close to a year back for its infamous ‘battery throttling’, the apology resulted in more furor than mollification. After drawing a lot of anger from the users on social media, especially Reddit, Apple had to accept that they messed up in communicating to the consumers that it had purposely slowed down older iPhones with aging batteries.

Given that the company atoned for this peccadillo by offering a battery replacement for a few dollars to recover the phone’s performance, most people forgave the company’s indiscretion. However, there are still some people who are vehemently criticizing the tech giant for not doing enough for its users—despite charging heavy premiums for iPhones—such as designing an iPhone with a removable battery, for example.

Well, the idea does sound pretty good. You would certainly relate to this idea more as a millennial who used mobile phones with removable batteries a decade or so back. A removable battery meant that you could have an extra backup battery, just in case you ran out of charge and didn’t have time or the ability to charge your phone. Popular throughout the 90s and 2000s, why have removable battery designs fallen out of favor?

Before we get into the technical side of why manufacturers are so reluctant to bring back smartphones with a removable battery, let’s first take a little lesson from history.

iPhone and the advent of phones with non-removable battery

Asking Apple to make an iPhone with a removable battery is a distant dream, as it is highly unlikely that Apple would do that. They’ve never tried even once since the launch of the iPhone in 2007. The battery in an iPhone is typically sealed inside, so the only way to replace it is either by going to an official Apple service center for repairs or trying the more risky route of opening the iPhone all by yourself and voiding the warranty in the process.

Even before the introduction of the much awaited iPhone in 2007, the design team at Apple was pretty decisive about abandoning the removable battery design. Although it appeared to be a jarring design choice, as all the phones back then came with removable batteries, it ultimately became the mainstream choice for other phone manufacturers. 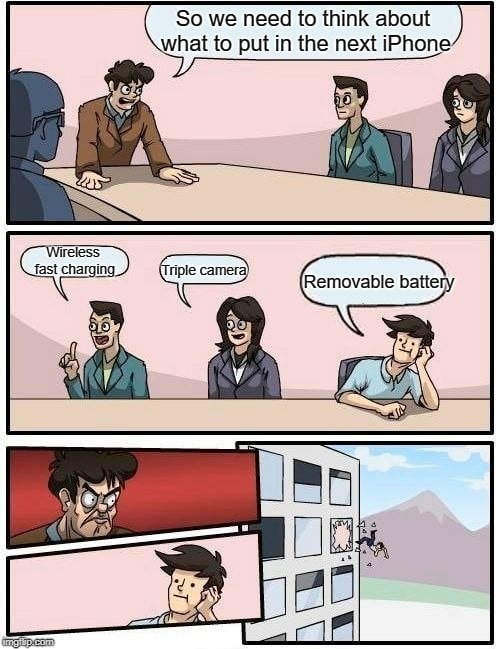 When the popularity of Android was surging in its early growth phase, one distinction that Android phones had over iPhones was that they offered removable battery functionality. However, when you look at the current landscape of Android (and smartphones in general) that is no longer the case. No major mobile manufacturer has released a flagship phone with removable batteries in the recent past. The question is, why have mobile manufacturers stopped making smartphones with removable batteries?

If you’re an iPhone fanboy or have a soft spot for Apple, you might feel that this is because everyone is trying to copy the iPhone. Well, that simply isn’t the case.

In electronics manufacturing, whenever you make a decision not to do something, despite there being no known drawback, you’re often venturing into doing something else—perhaps something better. Notably, that ‘better’ new direction couldn’t have been accomplished without sacrificing that former ‘usual’ thing.

As mobile phones evolved into smartphones, mobile manufacturers made the deliberate choice of abandoning removable battery design in order to add a couple of other exciting enhancements.

Although removable batteries offer flexibility, they greatly limit the potential design of a smartphone. Take a look at the 2014 flagship phone Samsung Galaxy S5 and Samsung Note 4. Notice any similarities? They both have easily removable ‘plastic’ backs that allow access to the battery. That might be a good thing—except that people yearn for a more superior material to have that ‘premium’ feel in their hand. While the Note 4 had a metal frame, the plastic body on the back got a lot of criticism from consumers who wanted to experience that “premium feel” after spending so much on an expensive flagship phone. From the S6 onwards, Samsung decided to bid adieu to plastic by exclusively using a metal/glass back. Samsung, as a brand, has enjoyed success and far more acceptance in the smartphone market since that decision. Now, glass and metal bodies simply don’t work with removable battery architecture. It’s not impossible, as there are a couple mobile options featuring glass/metal with removable battery architecture, but the design inevitably has some drawbacks, including increased thickness. Sealed batteries, on the other hand, have led to much slimmer designs and easy implementation with luxurious materials without any tradeoffs for good aesthetics.

It’s unrealistic to expect that you will never accidentally spill water or other beverages on your phone or will never need to urgently text someone outside on a rainy day. Thus, you definitely want your phone to have zero openings and robust internal sealing so that water cannot seep inside and mess with the electronics inside your phone.

Well, that robustness is impossible if the phone’s cover easily pops off or cracks, potentially permitting water to seep inside the PCB—the heart of the phone. Furthermore, high-end phones are even dust-resistant these days. Obviously, no one likes tiny rocks or sand particles getting inside their phone and hampering its functionality. However, it becomes very difficult to make a dust-resistant design with a removable casing. Making Room for Other Features

I’ll restrain myself from going too deep into the technicalities of battery design, but to put it plainly, removable battery architecture hogs precious physical space within an already tightly-packed mobile phone. Unlike a concealed battery, a swappable battery requires an additional layer of shielding to protect against day-to-day impacts. This translates to extra thickness. On a phone where every millimeter counts, there is no competitive advantage to compromising for a thicker design when everyone else is attempting to make phones thinner.

Instead of squandering precious real estate for extra battery padding, engineers can instead fit in some cool hardware for empowering the phone, including adding multiple cameras, stereo speakers, wireless charging capabilities or better gaskets for weather resistance.

Essentially, removable batteries are also confined to rectangles, or at most, a square-shaped design for easy fitting and removal. If you’re an electronics geek who is aware of recent trends in the battery industry, you know that new phone batteries are being designed to squeeze out more power with unorthodox designs.

For example, one of LG’s flagship phones has a step-shaped battery design. This has allowed the company to pack more battery into the curved corners, which are otherwise wasted with straight-edged conventional mobile batteries. Similarly, the latest iPhone X uses a quirky L-shaped battery for optimum space utilization. If you’re someone whose dream iPhone is one with a removable battery, I’m sorry to say that your dream is unlikely to come true. Given the shortcomings of removable batteries when they come to needing extra space, more shielding, and a rigid design, mobile manufacturers have likely given up on removable battery design for good!