Yes, an odometer does show incorrect readings when tires of different sizes are used. This is attributed to how an odometer records the amount of distance a vehicle has travelled.

As a child, you might have spent quite a bit of time wondering what the random numbers rolling up and down your dad’s car dashboard meant. By now, you know that these numbers are actually a count of the number of miles the car has traversed since its maiden ride. The device that measures the distance covered by the vehicle is called an odometer.

What is an odometer?

An odometer is a mechanical device and, like everything mechanical, is prone to certain errors. Two principal reasons why an odometer may show incorrect readings include faulty mechanical parts or a change in tire dimensions, the latter of which we’ll be addressing in this article. 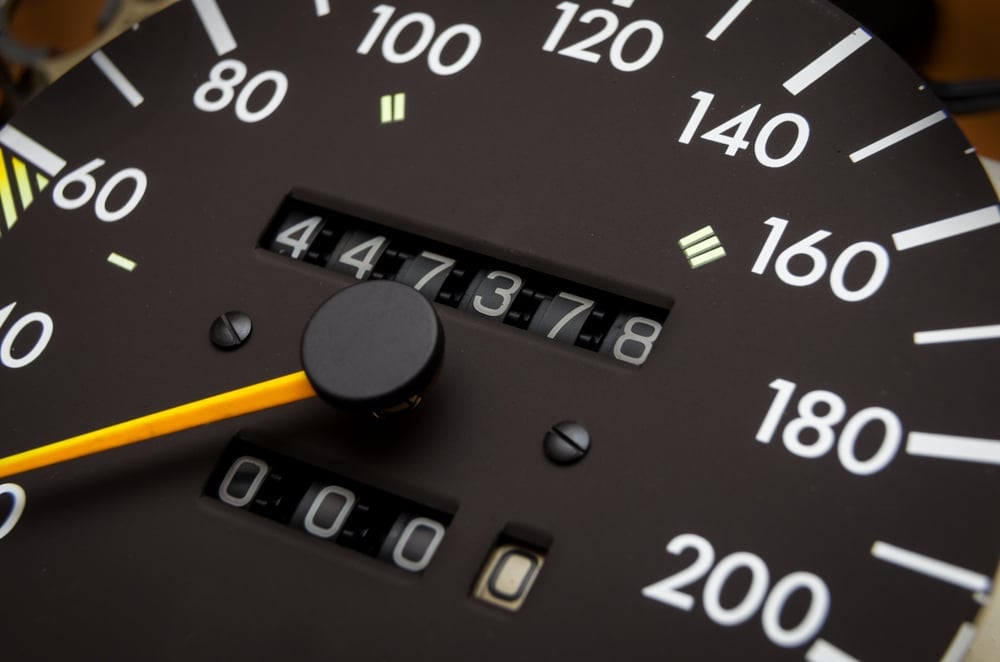 An odometer, also called a milometer, is a device that measures the distance traveled by a vehicle.  (Photo Credit : Yaroslau Mikheyeu/Shutterstock)

How does an odometer work?

Understanding how an odometer works will help explain why their readings can get messed up when tires of different sizes are used. So, let’s get into it!

An odometer, much like a speedometer, can be either purely mechanical or electronic in nature. The origin of mechanical odometers dates back to the 1600s, but their electronic counterparts pushed them out of fashion in the early 2000s.

Nowadays, vehicle manufacturers primarily employ electronic milometers because of their lower cost and more useful features. Both types enjoy a similar working procedure as their speedometer cousins—and also boast some of the same errors!

Mechanical odometers are incredibly simple in their construction and manner of operation. They are essentially a set of gears with an extreme gear ratio (1000:1). A gear ratio is defined as the ratio of the rotational speeds of the first gear to the final gear in a gear train (a set of gears). The ratio of 1000:1 can be understood as, for every 1000 rotations of the first gear, the final gear (the number dial in the case of odometers) will make one rotation. The first gear is driven by the same drive cable that drives the speedometer. One end of this drive cable connects to the output shaft of the transmission.

As the vehicle moves, the rotary motion of the tires carries forward to the drive cable. The drive cable then turns the small gear appended at its other end. Next, a set of gears (usually 3-4 gears) transfers this motion to the number drum. After a set number of rotations of the tires, the numbers on the drum will roll to indicate the distance traveled. The number of rotations needed for the number dial to record a mile or kilometer varies depending on the gear ratio and tire size used. 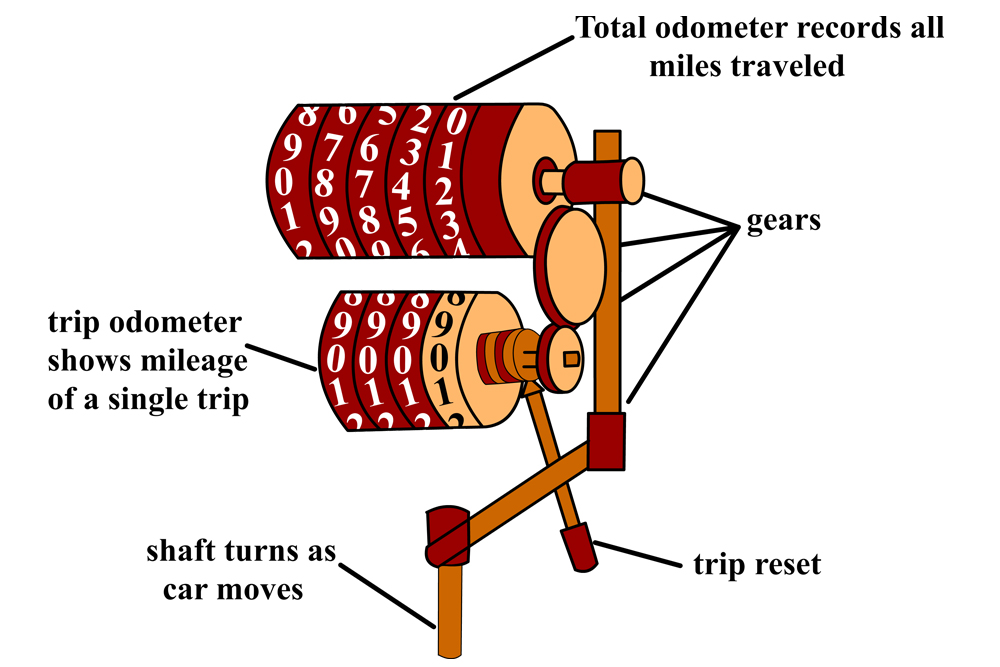 Construction of an odometer.

Apart from the basic distance-recording apparatus, additional trip milometers are also present. These have a relatively smaller number-indicating drum and record the distance traveled in a single trip/ride of the vehicle. The setup also includes a mechanism to dial back the main odometer readings to zero.

Why do odometer readings get messed up?

As mentioned earlier, odometers and speedometers are prone to the same types of errors. These errors are primarily caused by changes in tire dimensions. These changes in dimension may be the result of wear and tear, a change in tire pressure, load, temperature, etc. 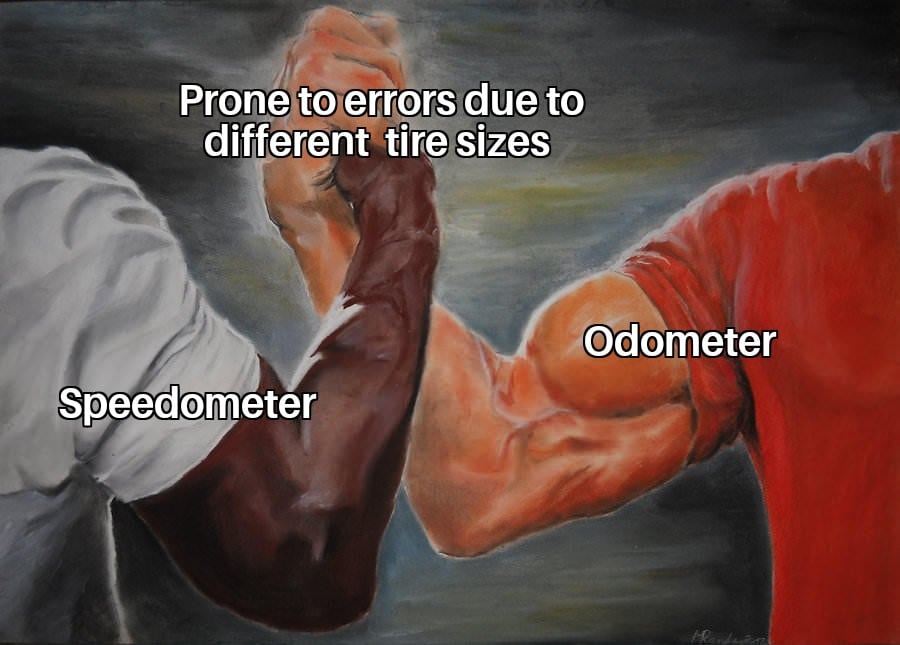 A speedometer and odometer are subject to the same types of errors.

An odometer calculates the distance by multiplying the circumference of the tire by the number of times it rotates.

Circumference of a tire is its diameter times the mathematical constant pi.

Distance measured = (3.14 × Diameter of the tire) × number of rotations of the tire

Here, the diameter of the tire is expected to be a constant, but in reality, it isn’t. Tires undergo wear and tear as a car traverses more distance. These small forms of wear and tear change the overall dimension of a tire, resulting in an incorrect calculation of the distance covered. A change in outside temperature also causes a change in the internal tire pressure, which alters the overall tire dimension.

Furthermore, manufacturers calibrate the dashboard odometers for the tires installed by them, which are considered “standard”. If the car owner switches to a different sized tire for some reason, the odometer will need to be recalibrated. The device will continue to be off by several percent if it isn’t recalibrated, leading to inaccurate calculations of distance traveled.

The formula to find the percentage error for a faulty odometer is:

Odometers may display incorrect readings when tire size changes, but they can also be tampered with for the purpose of resale. Some people call this practice clocking or busting miles. Vehicle owners tamper with odometers to indicate a lower overall distance traveled by the vehicle, as this increases its market value. The readings are tampered with by either removing the odometer and winding back the numbers or by connecting the drive cable to another (newer) odometer.

However, strict laws have now been put in place to avoid odometer fraud. The law requires that mechanics and car repair shops maintain records of odometer readings when they service a car. Additionally, people found guilty of tampering with their milometers are penalized under the law.