Studies show that auditory memory is reliable for immediate recall, while visual memory is more relied upon for information stored in our long-term memory.

I was recently at a restaurant that was designed to look like a cave. At a table next to mine, the family was speaking about their recent trip to some caves and how uncanny the resemblance was to the restaurant itself. One of the kids remarked that he was thankful the restaurant didn’t smell like the caves they’d visited.

However, the father mused about what it sounded like in the cave, and whether the similar white noise sounds were playing as the background music to the restaurant. They claimed to have heard the wind, or some birds, but mostly their own chatter, but they weren’t really sure. This got me wondering about how much we should trust our memories, or if they can be trusted at all?

Why Do Some People Have Such a Good Memory?

Why is it that the family remembered what they saw vividly, rather than what they heard? To begin with, memories represent a person’s capacity to retain information that they have paid attention to. It is also the ability to retrieve this information when needed.

Processing information, or turning information into memories, resembles what happens in a computer. The data is received, encoded and then stored. The same thing is true in humans; the data from the environment is received through a sensory input, which is fairly short-term in nature. The data is then encoded using previous experiences or by forming associations. Lastly, the data is stored safely, at which point it’s called long-term memory. To understand which type of memory is better, we’ll look at how they are recalled both in the sensory stage and after they’re stored in our long-term memory. 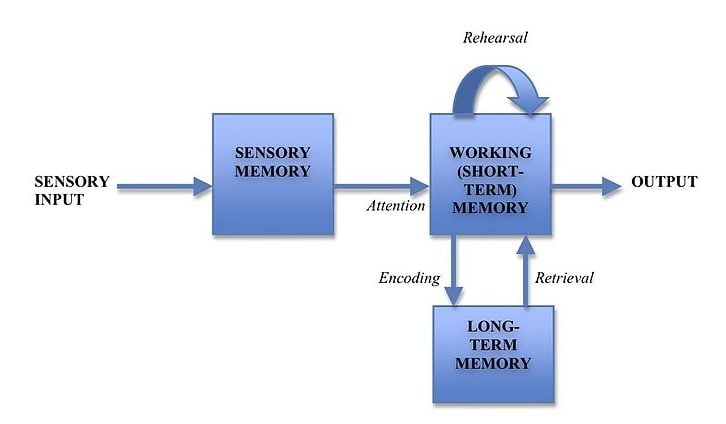 Which trumps the other?

As we can see, echoic/auditory memory lasts longer than iconic/visual memory. The main function of sensory memories are to hold on to information long enough to be recognised. Once done, it turns it over to the working memory. The remembrance in working memory is subjected to a number of factors.

To examine this, in 1964, Conrad and his colleagues set up an experiment wherein participants were presented with ten consonants. One group was shown these letters, while another group heard the consonants spoken letter by letter. They were immediately given a piece of paper and asked to pen down what they had seen or heard. It so happened that the group that heard the letters showed more accurate recall, as compared to the group that only saw the letters. Read the alphabets. Minimize this tab and try to recall them in the same order. (Photo Credit : pxhere)

It must be noted that these were random letters, lacking meaning, as the participants’ encoding and recall could be affected if there had been meaning attached.

In 2010, researchers from the University of Cyprus conducted a similar study in children aged 7-13. In the study, they tested they tested the effects of stimulus modality on working memory performance. There were three ways of presenting the information- auditory, visual, and auditory and visual simultaneously. The study concluded that the participants were able to learn and recall better when there was pictorial representation, than just auditory representation. But the study also highlighted that there were some indications that even working memory was influenced by previously knowledge. Another study in 2009 by Lindner and her colleagues examined rates of learning and recall for text that was heard versus text that was read. They looked at immediate and delayed recall and concluded that the participants who read through the text given to them retained and learned more than those to whom the text was read out, in both immediate and delayed tests. So, the studies above indicate two different aspect of the same working memory. For meaningless letters and words, auditory mode of information was remembered better. But for information that contained meaning just the mode of presentation would not suffice, but pictorial information and visual presentation of the text was recollected better.

What are Long Term Memories?

Once a memory is made, it must be retained. Any information that we receive with any kind of meaning or usefulness to us is retained in our long-term memory. In 2009, Cohen and his colleagues concluded that auditory recognition memory (recognizing sounds) was significantly inferior when compared to visual memory (recognizing objects).

Later, the participants were tested on their immediate recollection, same day and next day recognition of the stimuli that was presented. The study concluded that for all three modalities, visual and tactile recall was much greater than auditory recall and recognition. Furthermore, the memory retention for tactile and visual stimulus was almost the same.

The straight line on top is what the route for visual memory looks like, while the curved line below is the path for auditory input to reach the brain cortex.

A neurobiological study by Munroe-Lopez and her colleagues found that this discrepancy occurs because the pathways of encoding for auditory and visual memories are different. That is, while visual memory has a direct path for storage, auditory memory has to make various synaptic pit stops to reach its destination before the memory can be stored. Therefore, due to the anatomical pathway that auditory memory takes, its recall and recognition power might not be all that strong.

Lastly, research done on monkeys—the only other primate with some kind of proven capacity to make memories other than humans—suggests that monkeys require extensive training to remember certain auditory tasks. On the other hand, they performed fairly well on tasks requiring visual cues and recall.

So which type of memory is the best?

The earliest reference to the concept of memories was made in the seventeenth century. John Locke, a well-known philosopher, proposed the concept of ‘Tabula Rasa’. These two words essentially mean that we’re all born with a blank mind, or rather a blank slate. Thanks to that blank slate, things and events have a platform on which to write themselves into our lives and stay there. However, Locke never told us which memories were stored more effectively.

Thankfully, modern-day science has given us various ways in which these different forms can be tested. As we can see from the research studies quoted above, although auditory information is retained the longest by sensory memories and is easier to measure as duration is the only factor taken into consideration. Remembering things over shorter or longer periods of time involve a number of factors and not just their modality. Some researchers also suggest that emotions are an important factor to consider while looking at remembrance rates. The type of information presented also holds the key to it being remembered as well as our ability to associate it to previously held beliefs or facts. Many theories under the pictorial-superiority hypothesis claim that information is better remembered with pictures. Going by these, factors, although visual information is more easily remembered, it can be said that auditory information can also be retained easily based on the situation at hand.

Not only are these research findings important, but they have also been employed widely in the special education system. Teaching for children with special needs is usually done using the auditory-visual-kinetic system, which makes sure that all the senses are included when the child learns to read and write, rather than just listening to auditory instructions, as is often the case in general classrooms. The efficacy of these methods is undeniable.

So, the next time you’re off making memories, test this ability for yourself, and let us know which aspect of your memory was most vivid!

Also, without scrolling up, can you remember the letters in the example image that you read earlier?