A joint is a junction between two or more bones and cartilage. We broadly divide joints into three main categories—immovable joints, slightly/semi-movable joints, and freely movable joints. This classification is based on their structure and how they move.

You can rotate your entire arm at the shoulder in a full circle, but you can only move your elbow back and forth. While playing cricket, for example, a bowler chiefly uses his shoulder, while a batman depends on his elbows. Likewise, other parts of the body show a variety of movements. Your back can only bend to a certain extent, whereas your wrist can freely move in all directions.

This variety of movements is a function of the different types of joints in the body, of which there are many!

Let’s start with the basics.

What is a joint?

A joint is a junction between two or more bones and cartilage. We broadly divide joints into three main categories—immovable joints, slightly/semi-movable joints, and freely movable joints. This classification is based on their structure and how they move.

Immovable joints are fibrous joints. Here, the bones are linked to one another by sturdy connective tissues called ligaments. They are also known as ‘fixed joints’ or ‘synarthroses’ in Greek.

Examples of fibrous joints are sutures of the skull and gomphosis, i.e., the joint between the jaw bone and the roots of a tooth.

In adults, the sutures of the skull are rigid and fixed, but they are widely spaced in babies to allow for growth of the brain. The sutures close by the age of 2, once brain growth is complete. These are called cartilaginous joints, as they are surrounded by hyaline cartilage that can stretch to allow some degree of movement. The Greek word for these joints is ‘amphiarthroses’.

The best example of this type of joint is your back. Your spine is made of a series of bones called the vertebrae, which are connected by hyaline cartilage. The spine is primarily designed for weight-bearing; it can move forward, backward and even sideways, but only to a certain extent.

Another example is your ribcage. The ribs join at the sternum in front of the chest with the help of hyaline cartilage. This elastic cartilage allows your chest to expand and relax while breathing. 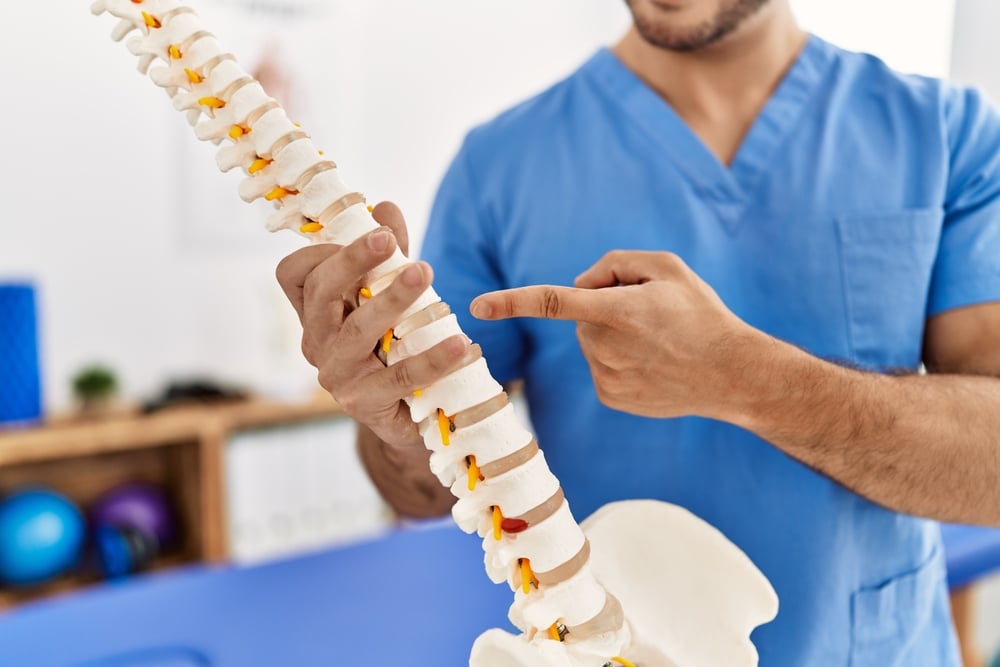 A model of the spine showing vertebrae connected by cartilage. (Photo Credit : Krakenimages.com/Shutterstock)

Freely movable joints are known as synovial joints. They are the most common type of joint in the body. Synovial joints come in different types and allow a wide variety of movements. The Greek word for them is ‘diarthroses’ .

A synovial joint is typically made of a joint capsule with an outer fibrous capsule, which is tough, as well as an inner synovial membrane. The inner membrane contains blood vessels that supply the cells of the joint with oxygen and nutrients. The joint capsule contains synovial fluid, which lubricates the joint and acts as a mechanical shock absorber. 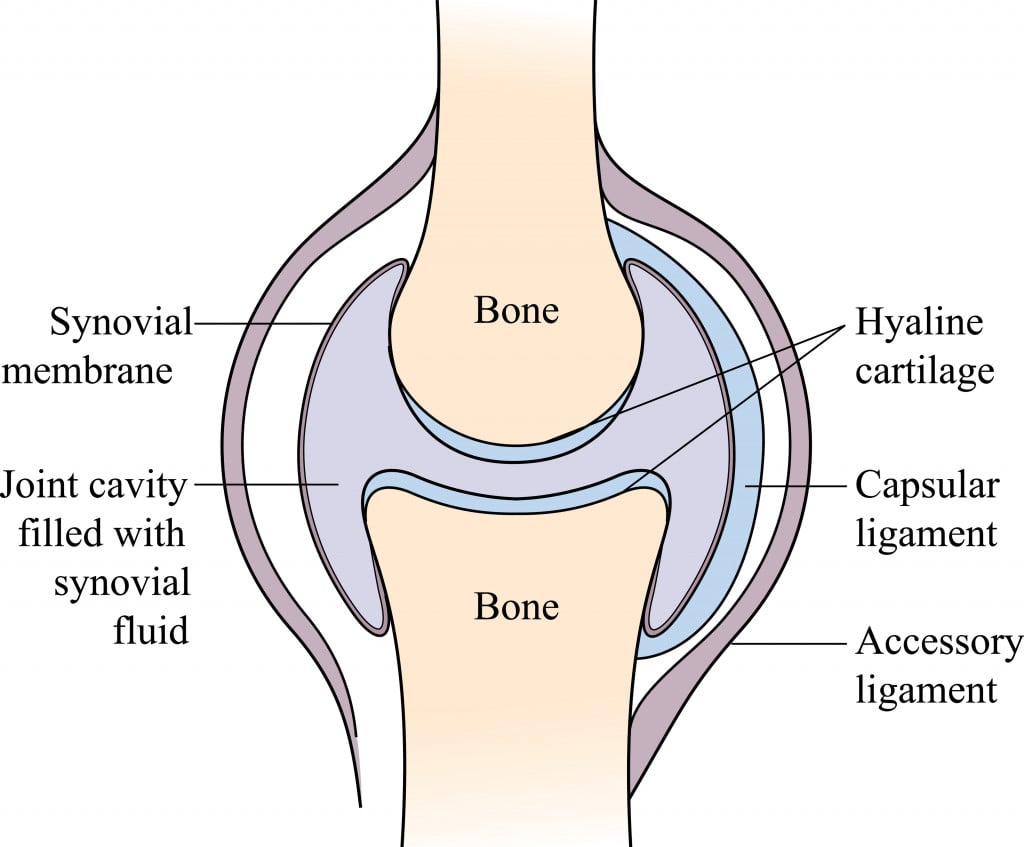 Different types of synovial joints and their movements

There are six types of synovial joints based on their anatomical structure and the movement they produce.

Synovial joints allow abduction, such as when you move your limbs away from the midline of your body, and adduction, when you bring them closer to the midline. They permit flexion and extension of body parts. They also permit rotation around an axis, like when you turn your head. 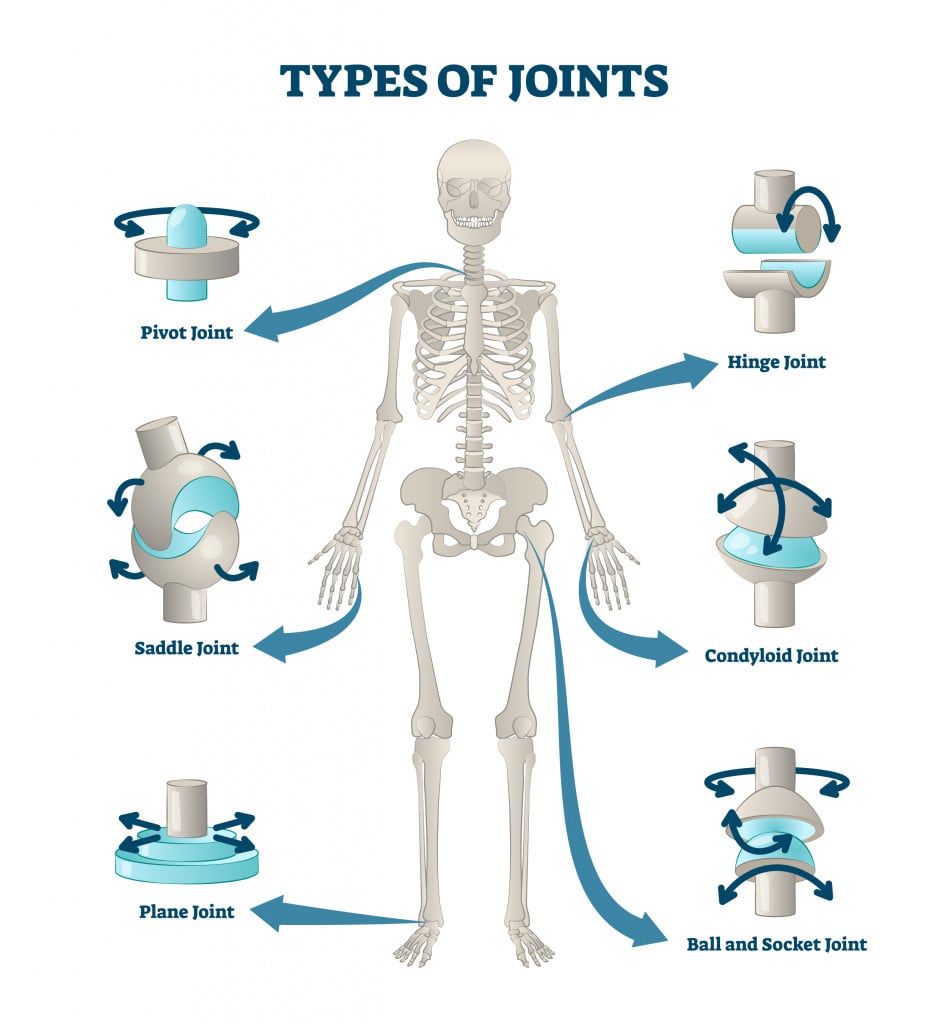 A diagram showing the different types of synovial joints and the kinds of movements they produce. (Photo Credit : VectorMine/Shutterstock)

The hinge, plane and saddle joints

Firstly, we have the hinge joint. As the name suggests, it is akin to the hinge of a door, allowing only back and forth movement. For example, your elbows and knees utilize this type of joint. They can move forward and backward only in one plane, allowing you to flex and extend your arms and legs. Other hinge joints include the joints of the fingers and toes.

Next, we have the plane or gliding joint. These consist of flat bones that glide over each other in any direction along the plane. For example, the wrist is a plane joint, as you can move it back and forth, both horizontally and vertically.

Thirdly, we have a saddle joint. These allow for back and forth and sideways movements. They also allow some degree of rotation. For example, the thumb allows this type of movement. The saddle joint might be the least common type of joint, but it is perhaps the most used one, considering how many hours we spend tapping away on our phones!

Another interesting type of joint is the ball and socket variety. As the name suggests, the end of one bone is round like a ball and fits into a hollow socket or a cavity on the other bone. This type of joint allows the widest range of movement—rotation, extension, flexion, adduction and abduction. Examples of this joint include the shoulder and hip joints.

Finally, we have the pivot joint. This joint allows rotatory movement around a fixed point. A perfect example of this joint is the atlanto-axial joint, i.e., the joint between the base of the skull and the neck. This pivot joint allows you to shake your head when you want to say ‘no’!

There are three broad categories of joints in our body. First, we have immovable or fibrous joints, such as sutures of the skull and teeth. Then we have semi-movable or cartilaginous joints, like our spine and ribcage, which allow for some degree of movement. Lastly, there are freely movable, i.e., synovial joints, which are the most common type of joint in the body. They come in several types, such as ball and socket, hinge, saddle, condyloid, plane and pivot joints. These joints allow a wide variety of flexibility and movement based on their individual structures.