Ecchymosis is a medical term describing skin discoloration that happens as a result of blood loss beneath the skin. Batman referred to this phenomenon to prove his point.

At the beginning of the new Batman movie, the police find the Riddler’s first victim, the mayor, murdered with tape all over his face. Unfortunately for the mayor, smashing his head open wasn’t enough. The Riddler had to take his thumb… for the sake of a pun. The police were trying to figure out whether the thumb was cut from the mayor’s body when he was alive or dead.

Batman quietly deduces that the mayor was alive when the thumb was cut off and mysteriously says, “Ecchymosis, around the wound”. But what does he mean by that and how did he figure it out?

Ecchymosis is a medical term describing skin discoloration that happens as a result of blood loss beneath the skin. Blood flows out from an injured or burst blood vessel into the surrounding skin and tissues, which causes a color change. In common parlance, we call this a bruise.

Suppose you get roughly tackled while playing football and the opposition defender spikes you in the calf. The impact damages the blood vessels beneath your calf, causing them to burst and spill blood out into the surrounding tissues. This blood gets trapped and darkens in color, forming those dark blackish-purple patches. 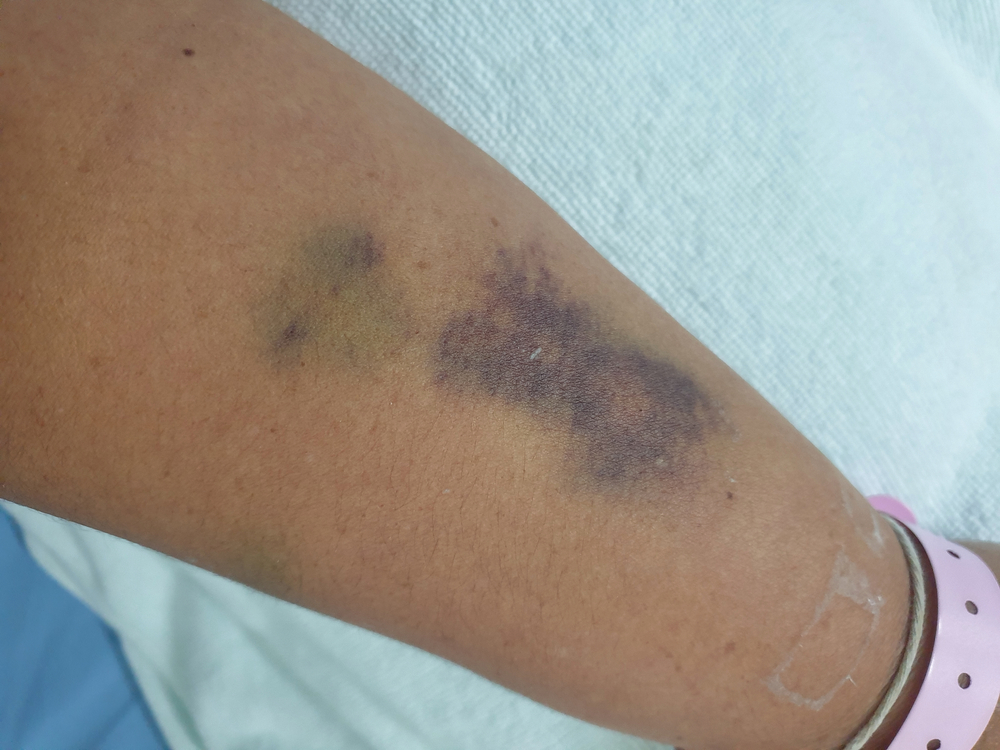 A bruise is simply the result of ecchymosis. (Photo Credit : Rojchana Loonrasri/Shutterstock)

Batman understood ecchymosis, which is how he was able to deduce that the mayor was alive when his thumb was cut from his hand.

How did Batman deduce it?

The not so noble officers of Gotham P.D. wondered how Batman could state so confidently that Mayor Mitchell had been alive when his thumb was cut off.

It’s the skin discoloration seen on the part of the thumb still attached to his hand that gives it away. The blood vessels were damaged when Riddler cut the mayor’s thumb. Blood flowed into the surrounding tissues in his hand and the surrounding skin darkened. That’s what he meant when he said “ecchymosis”. Batman saw the darkened skin around the wound.

It’s not very hard to spot. Ecchymosis occurs more frequently than you think. Another common example will be known to car crash victims – seatbelt marks.

If you’re wearing a seatbelt and get into a car accident and jerk forward, the seatbelt prevents you from flying out of the car. However, that quick stop to your torso is also injurious if you’re driving at a high speed, as the seatbelt presses against your upper body and restrains you tight to your seat. This pressure damages the blood vessels be neath your skin, which is why a red seatbelt mark forms across the torso.

If the mayor was dead, blood would not be flowing through his body, so it wouldn’t be able to leak into the surrounding tissues. Ecchymosis wouldn’t take place if the thumb had been cut after he died. 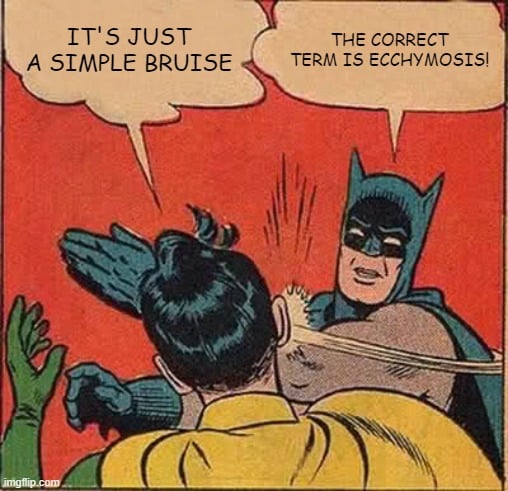 Batman is nothing if not particulate.

The clue was essentially skin discoloration.

Why does the skin darken?

What’s responsible for giving blood its red color? The answer is red blood cells… but why are they red? Hemoglobin!

Red blood cells get their oxygen-carrying function from the protein called hemoglobin. It’s made of four protein subunits with iron-containing hemes. The iron (Fe+2) in heme and oxygen come together, oxygen binds to iron and oxidizes it. That’s when it develops a strong bright red color. Deoxygenated blood has a less prominent and darker red shade, which is what we see when blood is taken from our veins.

When blood vessels break and spill out their contents, our body breaks the blood down so it can be reabsorbed. When red blood cells leave blood vessels, they burst open, releasing the hemoglobin. Hemoglobin is prone to oxidation and the heme group becomes oxidized (Fe+2 to Fe+3). The hemoglobin is also broken down to form bilirubin and hemosiderin by an enzyme called heme oxygenase.

These biochemical reactions are responsible for the tissue darkening around wounds. That’s why bruises change color with time. As the heme breaks down, the tissue color darkens. Bilirubin, a product of hemoglobin catabolism, is responsible for the yellow color that old bruises have. All of this is part of the body’s natural healing process. 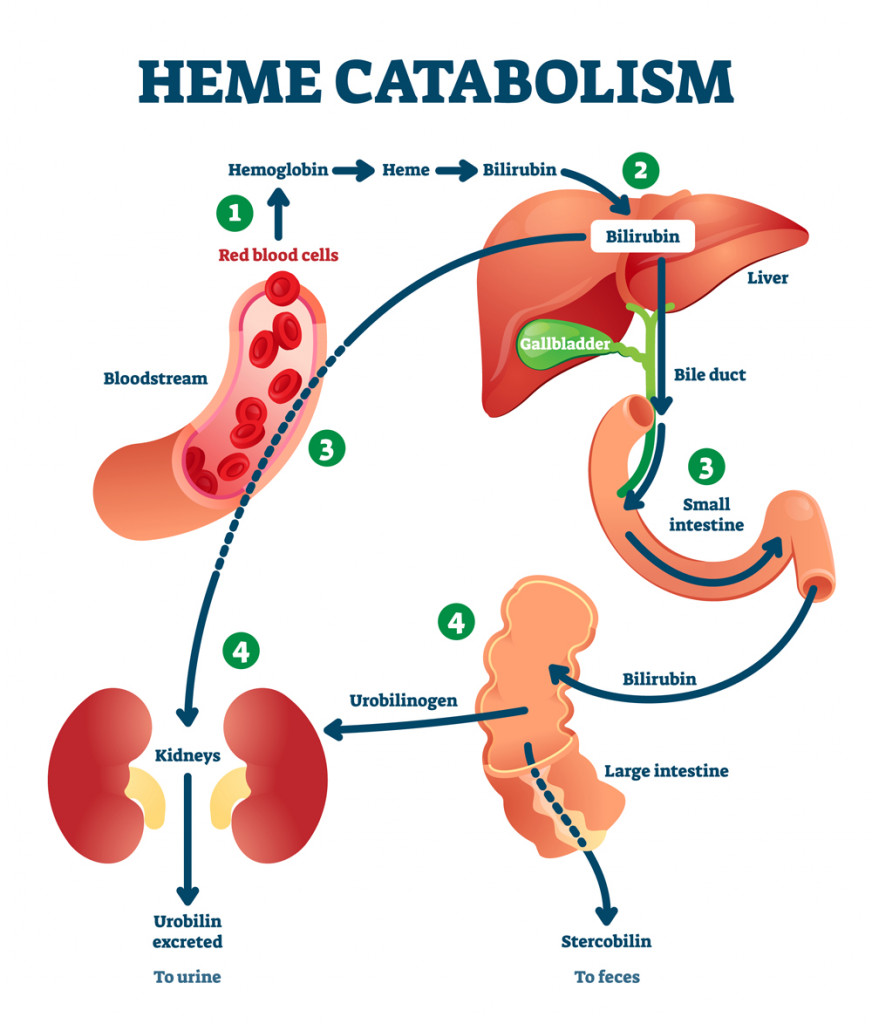 For this biochemical reaction to occur, blood would have to be flowing into the neighboring tissues surrounding the mayor’s hand. For this to happen, he had to be alive, as dead people don’t have a strong blood flow. Clearly, you can’t be a powerful vigilant superhero without knowing human biology!

Ecchymosis is a common phenomenon. On average, bruises fade in about two weeks. However, there are ways you can speed up that healing process. You can apply ice to slow down the blood flow, which reduces the blood leaking into the tissues, or you can apply healing creams.

Batman may not have portrayed skills worthy of being crowned the best detective in the world in the movie. After all, he couldn’t figure out Riddler’s plan, but we can cut him some slack, since he’s a young and inexperienced hero in this latest film. At least he was smart enough to spot the ecchymosis!