Feedback inhibition (in biology) is defined as the process in which the end product of a reaction inhibits or controls the action of the enzyme that helped produce it. In other words, the end products formed in the reaction actually get enzymes to slow down or stop making new products altogether.

Feedback inhibition is a general term that applies to the control mechanisms present in your body and individual cells that can shut off or inhibit certain actions. Without feedback inhibition, our bodies might produce too much of some substances, and not enough of others, thus wasting our precious resources, which is something the human body hates to do! Feedback inhibition consists of the actions taken by the body to regulate certain natural processes, and it is primarily associated with turning enzymes on and off. Before we can delve into what purpose feedback inhibition serves, and how it accomplishes its important task, we need to understand a bit more about enzymes and their role in the body.

In order to understand feedback inhibition, it helps to have a little bit of background on enzymes, substrates and products.

Say, have you ever made a cup out of clay? Substrates are cellular materials, just like the clay. The cup (or any other object) that’s formed using it is the ‘product’. As and when required, pieces of clay are added or removed to form the intended end product, i.e. the cup. Just like how clay can be shaped and reshaped, heated and processed in different ways to form end products, similarly, certain chemical groups may be removed or added to substrates to make the final product. A clay cup is just one of the many shapes that can be formed with the same raw material, i.e. clay. (Image Credit: Pixabay)

The enzyme binds its substrate at the active site, and that’s the point where the substrate becomes the product. Needless to say, there’s not just one step involved in making a clay cup; the clay goes through a number of steps to become a cup.

However, the process can go on even after the cup shape is obtained. This is because the cup shape is just the first product. It’s subsequently put through a number of processes so that it essentially becomes the ‘input’ for subsequent products. Similarly, the products formed by substrates are often used as substrates for other enzymes.

It so happens that at each step, a different product is formed, and as such, the substrate becomes different from what it was in the previous step. The cell uses enzymes at every subsequent step to create the next product.

With more than 30 trillion cells in the human body at any given time, and enzymatic processes happening constantly in every second of our lives, the closest estimate is that there are more than 35 thousand billion billion chemical reactions occurring in our bodies every second!

As that number clearly shows, enzymatic reactions are a critical part of survival, and are responsible for everything from producing energy and digesting food to ensuring the proper copying of DNA. In an enzymatic reaction, chemical groups are typically added or removed from a substrate by an enzyme, which leaves a product behind. This product may be immediately usable by the body, or it must undergo another enzymatic reaction as a substrate to be turned into a different product. 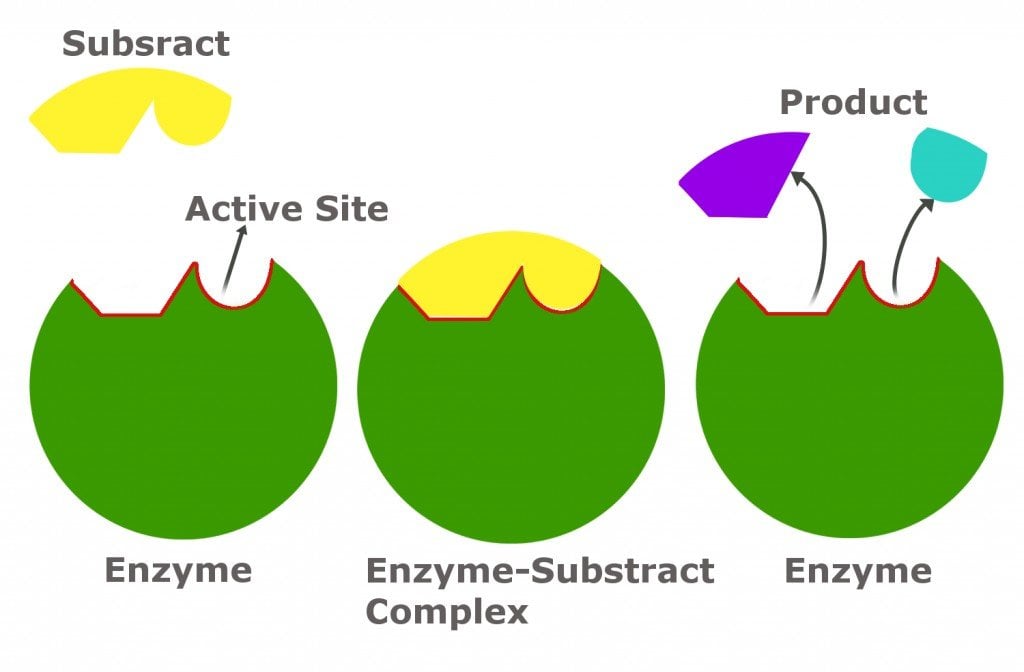 Technically speaking, an enzyme will bind to a molecule’s active site and begin its work. For example, in cellular respiration, which is how food is broken down to produce usable energy (ATP – adenosine triphosphate), a glucose molecule will undergo ten different enzymatic reactions with ten different enzymes in a process called glycolysis. Each of those ten enzymes will bind to the glucose molecule/substrate’s active site. When the enzyme is done (milliseconds later, in some cases), that molecule is now considered a product, although it will be considered a substrate in the next nine enzymatic reactions needed to produce just two units of ATP.

Also Read: What Is Allosteric Regulation: Definition And A Brief Explanation

How Does Feedback Inhibition Work?

In the process of product formation, enzymes play a crucial role. Their role is very important because the products that they help form can have positive or negative effects on the host organism. Therefore, it becomes critical that the action of enzymes is controlled/regulated, and they stop working when they are instructed to do so. A series of enzymatic reactions halted by feedback inhibition Feedback inhibition of enzymes works the same way. The end products formed in the reaction actually get enzymes to slow down or stop making new products altogether.

Feedback Inhibition As A Control Mechanism

Despite being an incredible machine, the human body still needs some guidance and control, which is where feedback inhibition comes in. When an enzyme changes a substrate into a product, some amount of need is fulfilled. If the body or cell no longer requires any more of that product, the product itself will tell the enzymes to stop functioning.

Remember the active site mentioned above, where the enzyme will initially bind to a substrate molecule? Well, there is a second active site, but this is specifically for the products generated by the enzyme. That product will go back in the enzymatic pathway to put a halt on the enzyme’s activity by denaturing the protein, preventing further binding with substrates.

When enough of the product has been utilized and the sensor no longer detects an excess of the product, the feedback inhibition is relaxed and the enzymes will release the products that have denatured them. The enzymatic reactions can then resume normally. This method of controlling the concentration of cell constituents is what allows us to function at even the most basic level.

Feedback inhibition controls cholesterol production. Cholesterol is important to facilitate signalling between cells and maintain the integrity of cell membranes. However, too much of cholesterol can be pretty dangerous, can lead to terrible consequences.

Therefore, it becomes important for the body to reduce the formation of cholesterol when it reaches dangerous levels. That’s where feedback inhibition helps. If a lot of cholesterol is present in the bloodstream, on new cholesterol-producing enzyme is made, which eventually leads to a gradual decline in the cholesterol levels in the body.

ATP or Adenosine TriPhosphate is formed from glucose due to a series of enzymatic reactions within our cells. If you have too much of ATP produced, it could lead to glucose depletion in your body and energy loss. Therefore, it’s important to regulate the amount of glucose that is broken down to produce ATP. ATP binds to a particular enzyme, which stops from further breakdown of glucose stored in the body. The following image can help you visualize the entire process better:

Also Read: Why Are Enzymes Important And How Do They Work? 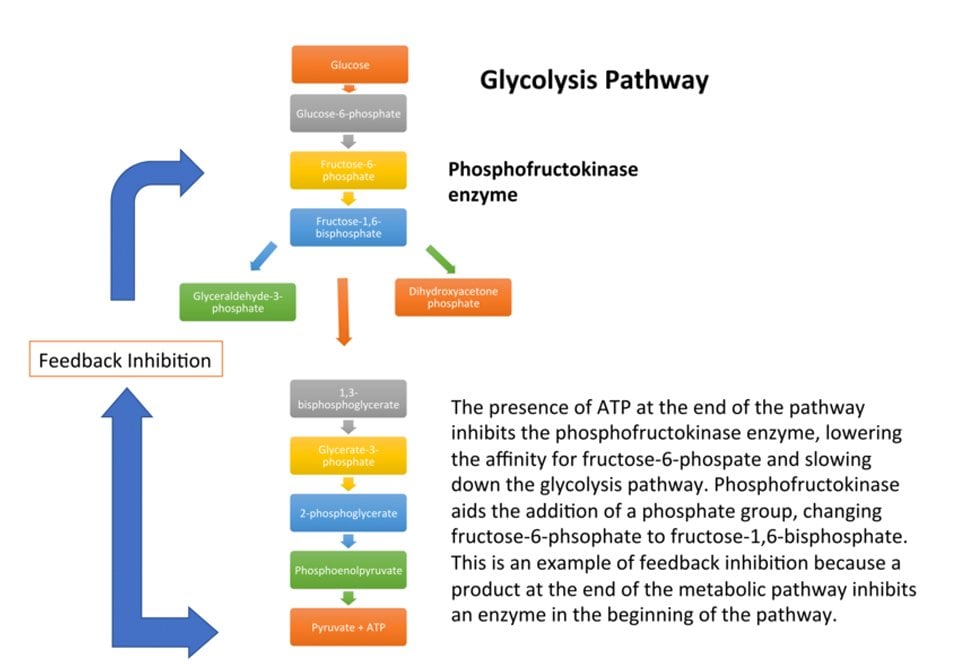 The steps of glycolysis and the use of feedback inhibition in this pathway. (Photo Credit: Phill729/Wikimedia Commons)

The microscopic actions that occur in our cells may be easy to overlook or take for granted, but obviously, those small actions add up to major effects on our health. Without the beautiful metabolic architecture of our bodies, which allow for enzymatic reactions and feedback inhibition, we wouldn’t have been able to evolve into the energetic, culinarily curious, critically thinking species we are today!