The skin’s thickness varies on different parts of the body depending on the function of that body part. Thicker skin offers more protection to particular areas that may be at higher risk.

Skin is the largest organ of the body with a surface area of approximately two square meters. However, you’ve likely noticed that those two square meters aren’t the same: there is considerable variation in thickness all over the body. The skin is thinnest over the eyelids and thickest over the palms of our hands and the soles of our feet.

But why is our skin not uniform? What’s the purpose of this topographical variation?

Before we can answer that, we first need to understand the different layers of our skin. 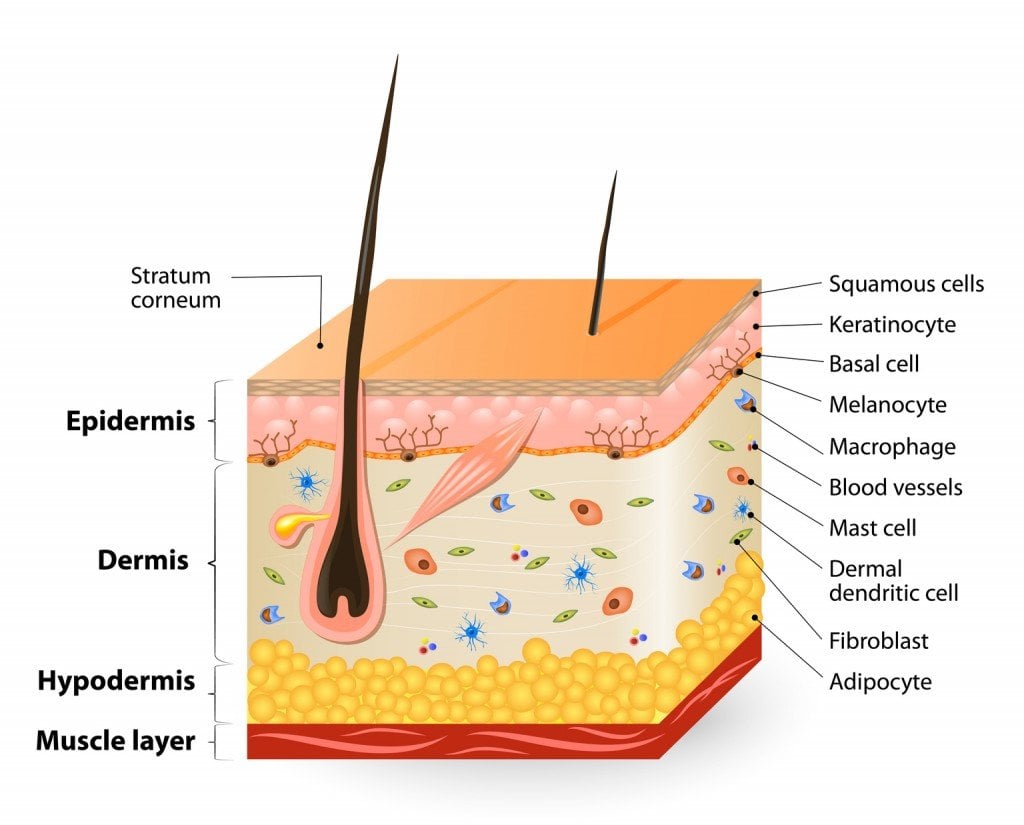 This diagram depicts the layers and cells which constitute the skin. (Photo Credit: designua / Fotolia)

Layers of the skin

The skin is divided into three layers: the epidermis, dermis, and hypodermis.

The epidermis forms the thin outermost layer of skin. Underneath this is a thicker layer, called the dermis, which contains nerves and blood vessels. Finally, there’s the hypodermis, which is made of fat and connective tissue, and anchors the skin to the underlying muscle.

This diagram shows the three main layers of our skin. (Photo Credit : Skin-Remedies.com)

The epidermis is made of multiple layers of developing keratinocytes—flat cells named for the keratin protein they contain. The cells of the deepest layer proliferate and move up towards the surface to replace thickened, dead cells that have been lost due to wear and tear.

There are five layers of the epidermis.

Keratinocytes start their life at the lowest layer of the epidermis, called the stratum basale. This layer contains stem cells that continually divide and produce new keratinocytes.

As keratinocytes in the stratum basale mature and lose the ability to divide, they migrate into the next layer, called the stratum spinosum. This layer is around 8 to 10 cell layers thick. This layer contains dendritic cells—star-shaped immune cells—that protect against invading microbes.

Next up is the stratum granulosum, which is 3 to 5 cell layers thick. Keratinization—the process where the keratinocytes flatten out and die—occurs in this layer. This process creates the epidermal skin barrier.

Keratinization leads to development of the stratum lucidum layer, which is 2 to 3 cell layers thick and consists of translucent, dead keratinocytes.

Lastly, there’s the stratum corneum, the uppermost and thickest layer of the epidermis. It is like a wall of 20-30 cell layers. The dead keratinocytes in this layer secrete natural antibiotics called defensins, which poke holes in bacteria.

As the cells migrate superficially, they become more and more flattened, and lose their nuclei to form the flattened dead cells of stratum corneum. The older dead cells are frequently sloughed off in the form of skin flakes or dandruff. 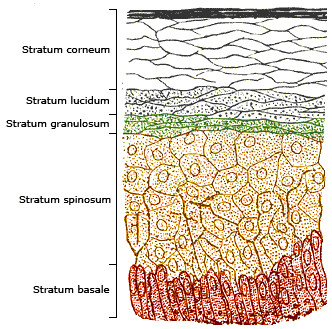 This diagram depicts the five layers of the epidermis. (Photo Credit : Wikimedia commons)

The papillary layer gets its name from the arrangement of connective tissue in finger-like projections called papillae. Each papilla contains blood vessels and nerve endings.

The Meissner corpuscle is one such nerve ending found here. It is a disk-shaped structure that detects fine touch, like the touch of a feather. Another type of nerve found here, called free nerve endings, detects pain.

It’s the papillary layer that is responsible for fingerprints. These are necessary for gripping and sensing abilities of the fingers and feet. Fingerprints are what make every single person unique!

Next is the reticular layer of the dermis, which is thicker than the papillary layer. The collagen in this layer is packed very tightly, making it a strong form of tissue support. In addition, it contains elastin, a stretchable protein that gives skin its flexibility. One type of nerve ending found here is called a Pacinian corpuscle, an onion-shaped structure that can detect pressure or vibration. This is what allows you to feel someone grabbing your arm.

Finally, the layer just below the dermis is called the hypodermis or subcutaneous tissue. This layer contains fat cells called adipocytes, which help store most of the fat in our body. It helps insulate deeper tissues, provides padding to the body, and anchors the skin to the muscle with connective tissue proteins like collagen.

Skin is a large and complex organ; both thin and thick skin have properties that allow the skin to accurately perform its functions, such as thermoregulation, protection, and sensory perception.

Thin skin and thick skin have different structures and functions in the body. The layers they contain provide their thickness and allow them to carry out their roles. 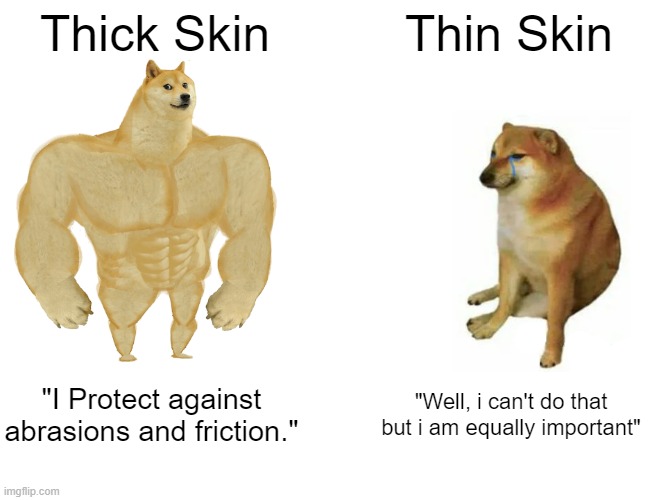 Thick skin provides protection from damage in areas that experience more friction and abrasion, such as the palms and soles. Thick skin also contains some sweat glands.

Thin skin only has four layers of the epidermis; stratum lucidum is absent. It does not contain epidermal ridges, but hair follicles and the arrector pili muscles are present. Stratum lucidum protects against mechanical damage by acting like an extra cushion in trauma-prone areas, so it is only found in thick skin, not thin skin.

Thin skin is present on most of the body, and helps to protect against infections, regulate temperature, and allow hair to grow!

The topographical variation of skin is necessary for it to perform such a wide range of functions. Thick skin on our palms and soles ensures that we can play sports without worrying about impacts and minor scrapes. Meanwhile, thin skin regulates body temperature and heals wounds, while also allowing us to grow our lovely manes and even experience goosebumps!