The tattoo ink penetrates the skin and settles into the dermal layer. The ink particles become trapped in the vacuole of the macrophages when they try to launch an immune attack against the foreign ink particles.

When I turned 18, I decided to get a tattoo. My mom was pretty reluctant, but I had made up my mind. Fast-forward a few years and here I am, without a tattoo! Long story short, I was never able to muster up the courage to get it!

Imagine that you’re an 80-year-old with the words ‘I solemnly swear I am up to no good’ tattooed on your wrinkled arm. No amount of soap or scrubbing will help you get rid of it.

Yet, the ink from a “permanent” marker fades from the skin, whereas tattoo ink doesn’t have the same transient fate.

The mystery between these two situations lies in the depths of our skin.

Simple pen ink does not penetrate the skin layers like a tattoo needle. Even though our outer layers of skin naturally shed every 2-4 weeks, the inner layers function differently.

What Are The Different Layers Of The Skin?

In terms of surface area, the skin is the second-largest organ of the body, accounting for approximately 2.5% of our body weight. That shouldn’t come as much of a surprise, there’s a lot of it! The skin is made of 7 layers that guard the underlying tissues, muscles, and other organs. There are 2 important layers that we need to understand in order to decipher the mystery of tattoos—the epidermis and the dermis.

The topmost layer of the skin is the epidermis, which has another 5 sublayers beneath it. However, let’s keep that aside and only talk about the epidermis as a whole.

The epidermal layer sheds dead skin after a few weeks. The healthy skin cells from the lower layers then replace the dead cells. The epidermis is like a protective covering that acts as a barrier against infections. Another interesting fact is that the epidermis does not contain any blood vessels.

The epidermis depends on the dermis for its nutrient requirements and the disposal of waste. Also, almost 70% of protein-coding genes are expressed in the skin.

The second important layer is the dermis, which lies beneath the epidermis and is comprised of connective tissues. Connective tissues connect, support, and bind other tissues or organs together. The dermal layer is further divided into two parts—the papillary region and the reticular region.

The former is a superficial area adjacent to the epidermis, while the latter is a deep thicker area of the dermis. The dermis also contains oil and sweat glands, hair follicles, nerve endings, lymph vessels, macrophages and CD4+ T cells.

A pen mark on any part of your body will naturally fade in a few days because the pen ink does not penetrate the skin nearly as deeply as tattoo ink. Pen marks only stay on the epidermis of the skin, while tattoo ink is intentionally lodged in the dermis.

Why Does Tattoo Ink Last Forever?

The tattooing process usually involves the insertion of nanoparticle ink pigments into the dermis of the skin. The tattoo needle is designed to deliver the ink straight to the dermis. The ink-coated needle pierces the skin in the range of 100 times per second.

Also Read: Science Of Permanent Tattoos: How Do They Get Permanent?

The ink enters and accumulates into the papillary region of the dermal layer. A tattoo is like an intentional trauma to the skin and the skin’s first response is to repair the site of the wound.

The presence of foreign ink particles activates the immune system of the body, which is one reason why a newly done tattoo swells up. It’s just the body’s mechanism to treat the “injured” area.

In humans, white blood cells are the warriors of the body. Macrophages are a type of white blood cell and are present in the dermis. These are specialized cells that detect, phagocytose, and destroy bacteria and other foreign materials that enter the body.

Macrophages are phagocytic cells that ingest the ink particles that get trapped in their vacuoles. The enzymes present in vacuoles easily degrade bacteria, but they do not affect ink particles.

As macrophages aren’t able to mount an immune response against the nanoparticles, macrophages contain the attack on the system by remaining in place and keeping the ink trapped in the vacuole. This process allows the ink to stay in the dermis almost forever! 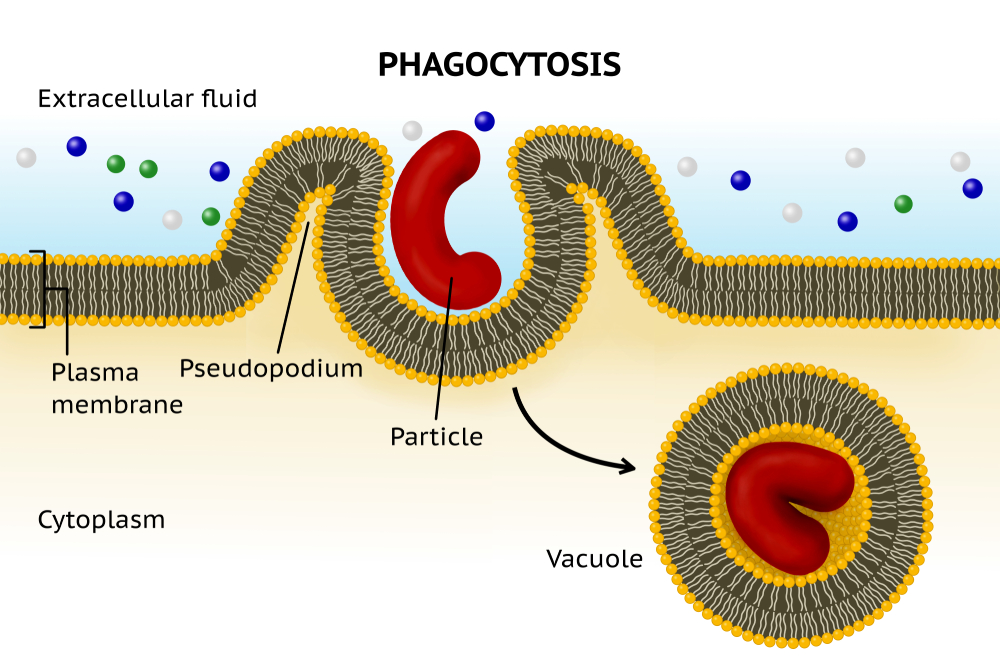 Phagocytosis of a foreign particle which later enters the vacuole of the cell. (Photo Credit : J. Marini/Shutterstock)

The simple answer is no.

Research was conducted on mice to understand how ink particles are retained in the dermis. Laboratory mice were tattooed with green bands on their tail. As expected, macrophages reached the wound site and took up the green dye in their vacuoles. CD45 is a marker that is present only on immune cells (macrophages) of the dermis, but not on other cells like the skin cells. In biology, a marker is a chromosomal landmark used to trace or identify a specific region of a gene. Experiments showed that CD45 negative skin cells did not have green ink. The experiment helped confirm the hypothesis that only macrophages trap ink particles.

To check for the life of macrophages that had ingested ink, an important experiment was performed with a similar type of mouse model that had been used previously. There was one notable change, wherein the diphtheria toxin was used to selectively kill only those cells expressing the CD64 marker. It is another marker specifically present on macrophages and monocytes. This CD64 mouse model was able to specifically and easily deplete macrophages from the tattoo site. Now, what followed 2 days later is the climax of the story; a new set of macrophages were seen accumulating at the tattoo site with ink particles in their vacuoles.

The free ink released upon the death of macrophages releases signals for newly formed macrophages to come to the site. The dying macrophages release the ink into the surrounding tissue, but the ink is then recaptured by the new macrophages. This release-recapture cycle continues indefinitely, causing tattoos to stay in place forever.

Although macrophages are well equipped with the mechanism to degrade bacteria and other particles, the sheer size of tattoo ink is too large to be ingested by the white blood cells.

Also Read: Can A Skin-Colored Tattoo Cover Up A Bad, Older Tattoo?

No matter how much we evolve, the human tendency to keep changing our minds will always be somewhat permanent. The forever nature of a tattoo was recognized by many in the past, who also occasionally felt the need to remove a tattoo. The methods used back then were rather crude and destructive, including chemical destruction, electrosurgery, and surgical removal. Thanks to modern technology, we don’t need to rely on these risky and painful options. A laser-based tattoo removal technique is often an option for those who wish to give their skin a clean start. The laser breaks down huge ink particles in the tissue and allows white blood cells to easily phagocytose and destroy the ink.

With that in mind, maybe getting a tattoo isn’t all that scary after all…