The reason that snake venom does not kill the snake that is filled with venom is because the snake has developed antibodies to protect themselves from their own particular blend of venom. Additionally, the venom is broken down in the snake’s stomach when they eat, which prevents it from affecting the rest of the snake’s body.

If you’ve ever watched a nature program, or gone on a perilous trek of your own somewhere in the wilds of the world, then you’re probably familiar with (and a bit wary of!) snakes. There are nearly 3,000 different species of snakes in the world, and more than 10% of these are venomous. Of that 10-15%, a very small portion are actually dangerous to humans.

Even so, the fear of being bitten by a poisonous snake still runs rampant through global cultures, because we have heard about or seen the terrible and fast-moving effects that snake venom can have on a body (Hollywood has made sure we’re aware of the power of snake venom!)

That being said, if snake venom is so powerful and deadly, why doesn’t it poison the snake? After all, the snake is slithering around with a bunch of venom inside, right?

The Science of Snake Venom

What is snake venom?

Snake venom is a special form of saliva that contains a range of zootoxins and is stored in something akin to our salivary gland. Once the venom is created and stored in these glands, it does not move back through the body, where it could infect other tissues, just as it does in their prey. The toxic venom is stored in these specially protected glands until it is moved down through narrow tubules in the fangs and delivered into the snake’s prey.

How does snake venom work?

This is a common question for those fascinated by the mysteries of Nature, as well as those who are deathly afraid of snakes. To understand this fully, we should first understand a bit about snake venom, as well as the mechanisms snakes have developed over millions of years.

Snake venom is primarily made up of proteins, the vast majority of which are broken down in the stomach, just like the proteins found in meat and beans. In other words, eating a protein-based poison wouldn’t be very harmful, as they would be neutralized in the stomach. However, if that venom somehow bypassed your stomach or entered your bloodstream in another way (such as through a bite), then the toxins wouldn’t break down and would begin to do real damage to your organ systems, typically in the form of necrosis and hemorrhage. When these toxic proteins are broken down in the stomach, they are separated into their simple, harmless amino acids.

The same thing is therefore true for snakes, in terms of eating their food. Those protein poisons function to debilitate and digest prey, in addition to natural defense, so snakes are exposing themselves to their own poison when they eat their food. However, when they devour that small animal (or even another snake), they are able to neutralize their own venom through this protein breakdown process while they digest their food. 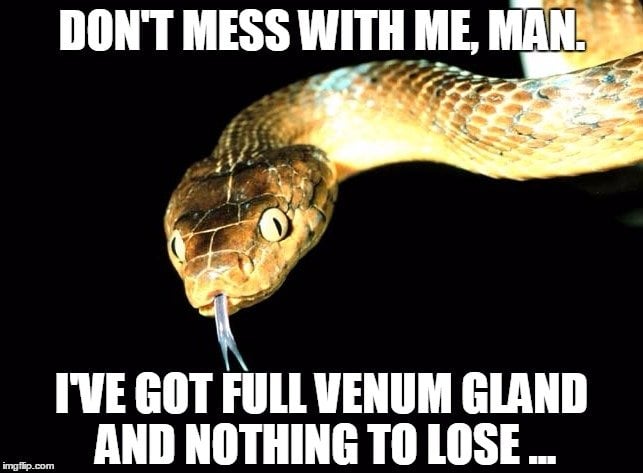 Why doesn’t the venom affect the snake?

Other than breaking it down in their digestion tract, snakes have adapted these glands to prevent any undue exposure to their own venom, there is a low level of exposure (Nature isn’t perfect, after all). This has led most researchers to believe that as snakes evolved, they developed antibodies to protect themselves from their own particular blend of venom. Research has shown that snakes of the same species often do not use their venomous attacks when fighting for territory or mates. This may be explained because the snakes know that their venom won’t necessarily provide an advantage in the fight, so they conserve it and use their brute strength to win.

However, snakes do not have antibodies for ALL types of venom, and there are hundreds of different venomous snake species in the world. Also, some venomous snakes eat non-venomous snakes, who are definitely affected by their toxic bite.

Furthermore, some snakes are susceptible to large concentrations of their own venom, as they’ve only developed tolerance to handle a low level of exposure. Therefore, if certain snakes bite their own tail, mistaking it for prey, and injecting a full dose of venom, the quick-acting venom could damage the musculature or cause low levels of necrosis. There is a relatively low chance of the snake dying, but definitive research is lacking in this field, given the ethical and logistical complications of researching snake fights to the death.

Snakes appear to be expert managers of their internal toxin levels, crafty about who they pick fights with, and reliant on the protein breakdown powers of their stomach, all of which keep them protected from their own venom and the venom of most other snakes.

They’re formidable and fascinating creatures, to say the least. It takes a pretty confident creature to spend its life with deadly sacs of poison stored right behind its eyes!