Bee stings hurt because their sting contains bee venom called apitoxin. This venom contains compounds that cause swelling and pain in the area of the sting. If you get stung, remove the stinger immediately and apply ice to reduce the swelling. Some people are allergic to bee venom and they should be taken to a medical professional.

Many people fear being stung by a bee whenever they leave the house in the summertime. Our response to seeing such an insect approaching us, or even hearing the buzzing sound that we associate with bees, is either to run in the opposite direction or stay very still and hope they leave us alone. Once the bee is out of sight (and earshot), we can breathe a sigh of relief and return to whatever we were doing before that flying terror sent us into a panic.

That’s a rather common response to encounters with bees, but why do we have such a strong reaction? Is the sting really that bad? For a bit more insight, let’s look at things from the perspective of the most popular bee in the world: the honey bee.

Why Do Honey Bees Sting?

Honey bees are social insects that live in large colonies. They mainly sting as a defense mechanism, as a way to protect the colony. 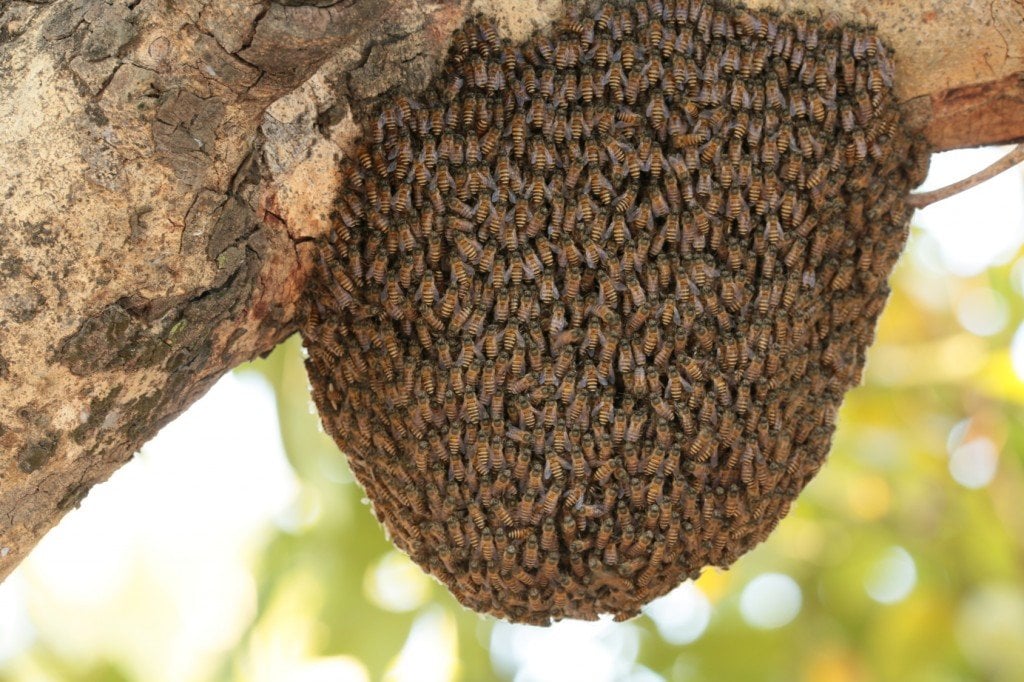 Therefore, when a honey bee nest is disturbed, an entire hive of worker bees will swarm the intruder and mercilessly sting them to keep their colony safe. These intruders can be fellow honey bees looking to displace their competitors, animals, birds and sometimes unlucky humans.

A single sting by a honey bee is only the start of a stinging chain reaction, which is why bees can be so terrifying. A honey bee sting releases alarm pheromones that alert other bees of the danger, which in turn sends them into a stinging frenzy.

Female worker bees are the honey bees that protect the hive by stinging. They have a venom sac that fills up with venom (an apitoxin) by the time the bee is 14 days old. Another interesting characteristic of these worker bees is that their stinger is barbed, in contrast to the stinger of the Queen bee, which is smooth.

Also Read: How Do Jellyfish Sting? 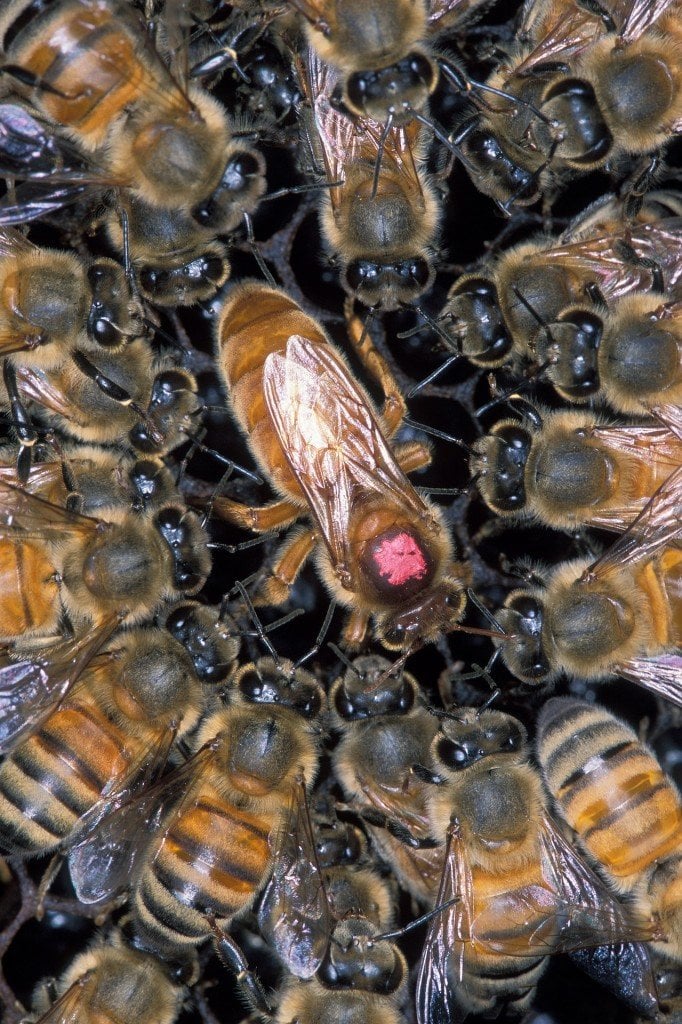 A Queen Bee surrounded by her minions. Credit: skeeze/ Pixabay

The barbed stingers of the worker bees are actually the quality that endangers the life of that bee if they ever decide to sting an animal. Depending on the thickness of the animal’s skin, the bee’s barbed stinger is likely to get caught in the skin. For that reason, when a worker bee stings an animal with thick skin, such as a human, it is unable to retract its stinger and is subsequently forced to leave the stinger stuck in its victim’s skin. In addition to the stinger, part of the bee’s abdomen and digestive tract, along with some of its muscles and nerves, are also left behind. 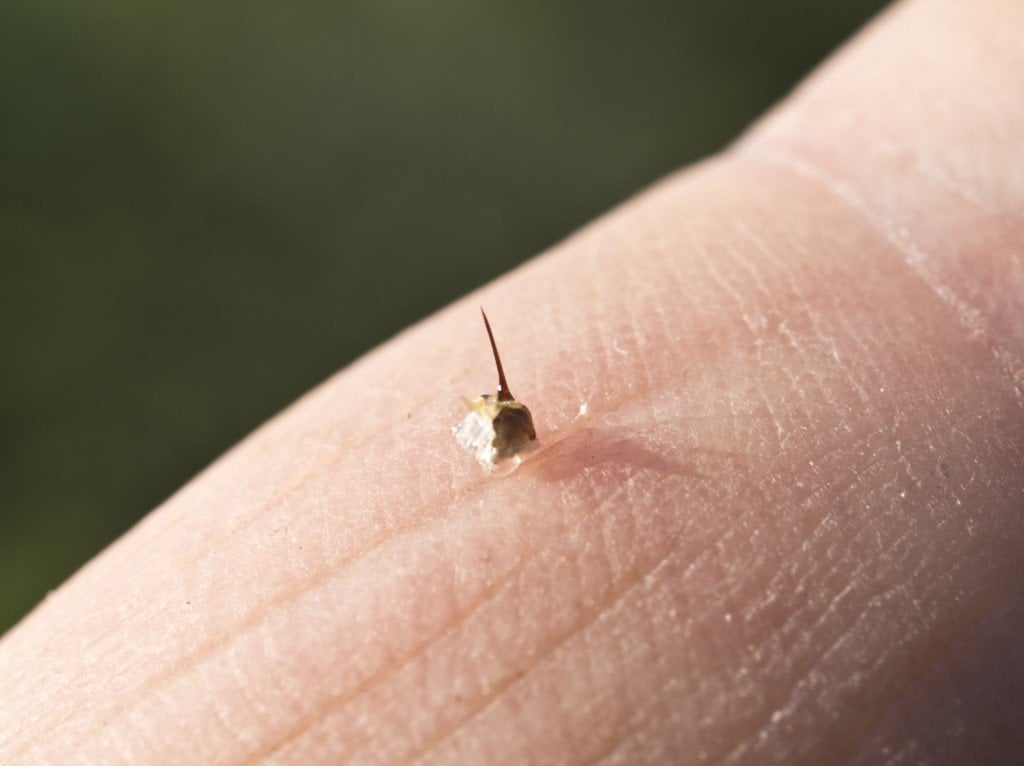 This injury is what kills the honey bee, which happens to be the only bee species that can die after stinging its victim, since other bee species have smooth stingers.

How Does The Sting Affect The Body

Even though a honey bee has stung you, left its stinger in your skin, and can’t attack you again, the ordeal of being stung is far from over. The bad news is that, apart from being painful, the stinger continues to inject its victim with venom for up to 10 minutes after the initial sting.

For those people with an allergy to bee venom, things can therefore get much worse, as they can experience anaphylactic shock and even death if they aren’t treated quickly.

How To Treat A Bee Sting?

First and most importantly, the stinger needs to be removed from the skin (ouch!), to stop the continuous injection of venom into the victim. This should be followed by applying ice to the affected area to control the pain and swelling. If the affected area gets worse, medical attention should be sought, which may include getting a tetanus injection.

Also Read: Why Do Mosquito Bites Swell Up And Itch?

Also, as mentioned earlier, people with hypersensitivity to apitoxins could experience anaphylactic shock, and would therefore need emergency treatment. For such people, it’s advisable for them to keep an EpiPen (which consists of epinephrine) handy to treat themselves if they are worried about anaphylactic shock occurring. Even better, they could immunize themselves from future attacks by receiving small injections of naturally-occurring venom.

In other words, be careful. Bees are docile insects that buzz about their daily lives and mind their own business. However, if you disturb them in any way, you’re in for a world of pain!