The appearance of patches of different colors on roads on a rainy day is due to a combination of oil, water and light rays. When it rains, the oil on the road comes in contact with water, and the light rays bounce off the surface of the oil and water to create a spectrum of colors.

I remember being told by my curious and ‘uninitiated’ friends during my childhood days that the color ‘rainbow’ spots that appear on roads after a fresh downpour is the rainbow itself, disintegrated into innumerable tiny parts by a powerful lightning strike that slashed through the rainbow itself!

I don’t know if I entirely believed that hypothesis then, but I must admit that it sounded rather dramatic and exciting. I also don’t know how many people out there still associate those tiny patches with a lightning bolt’s action against a rainbow, but I think it’s time to dispel the rumors.

Once and for all, let’s see what causes those ‘rainbow spots’ on roads after it rains. 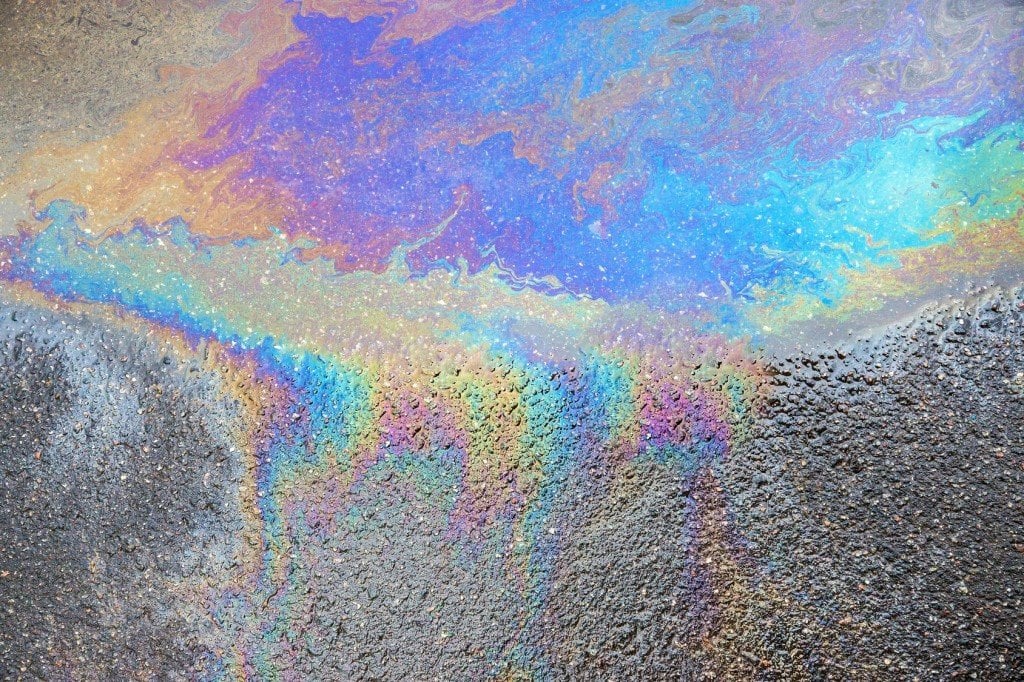 The appearance of patches of different colors on roads on a rainy day is no omen or magic per se; it’s just a spectacular combination of oil, water and light rays. That being said, before we go into further detail, we should understand a few basic things about light rays’ propagation through a medium.

The reflection of light is a very basic and extremely common phenomenon; when a light ray bounces off after hitting a surface, we say that a reflection of light has occurred, or simply, the surface reflected that light. There are a few parameters that any surface must fulfill to reflect light (or to become reflective). However, what if a surface does not reflect light, but instead lets it pass through? 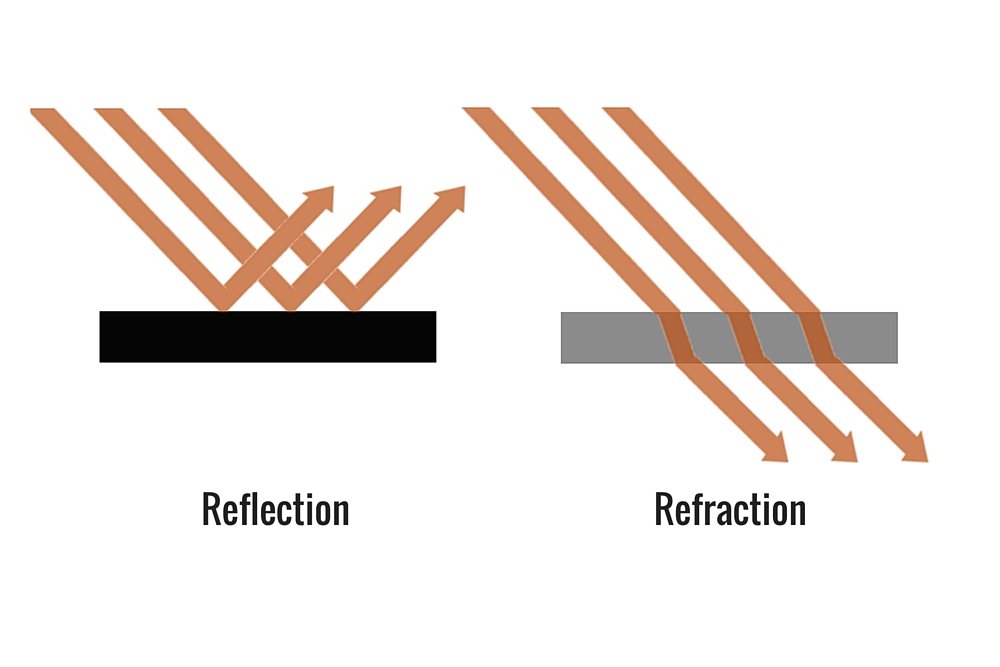 At that point, refraction occurs. Refraction is a phenomenon that involves a change in the direction of light rays as they pass through a medium. It’s due to refraction that stars appear to twinkle at night. (For more information, check out: Why Do Stars Twinkle, But The Sun Doesn’t?).

When you see small patches of rainbow colors on a road on a sunny day, you are actually witnessing a striking display of reflection and refraction at the same time!

Rainbow on the Road

Small quantities of oil are almost always present on roads (usually lubricating oil from cars, bikes and trucks), yet you only see those colorful patterns on a rainy day, right? Why is that?

This phenomenon occurs because when it rains, this oil comes (on the road) in contact with water. As you’ve surely heard in the past, oil and water do not mix, because the density of oil is less than that of water. The thickness of the oil layer also varies, from being as thin as a single molecule to extremely thick. Therefore, an oil layer of varying thickness floats atop the layer of water covering the road.

Effectively, there are three media that light rays come in contact with; air, oil and water. 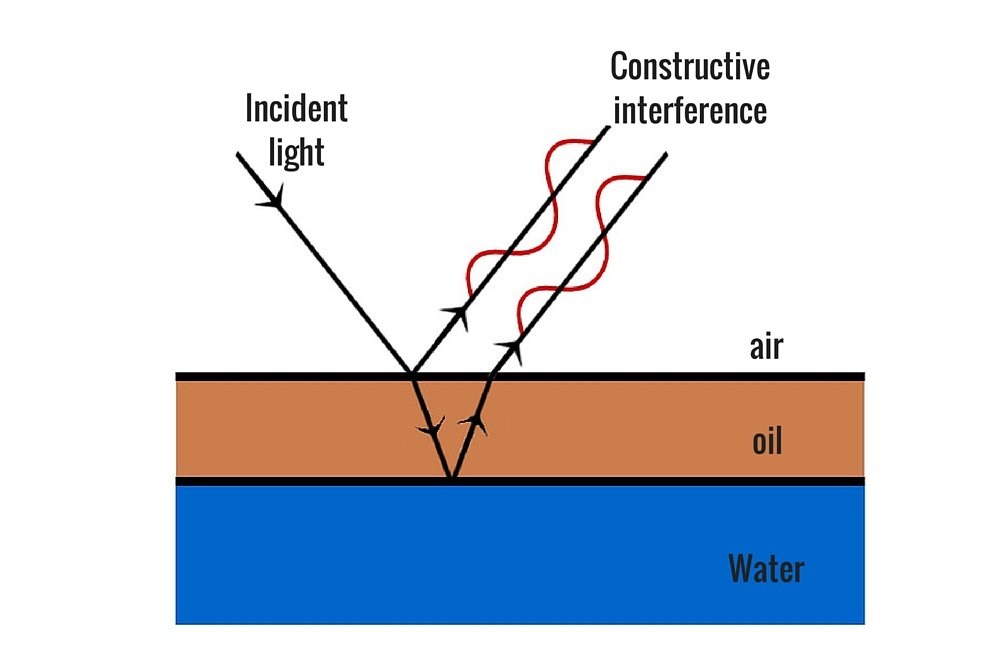 When light rays strike the top surface of the oil film, some of them are reflected immediately, while others are refracted (i.e., they travel through the layer of oil and are subsequently reflected by the bottom surface of the oil film). In other words, some of the light rays traveled less of a distance than others to reach your (the observer’s eyes), so there is a difference in the length of the path. 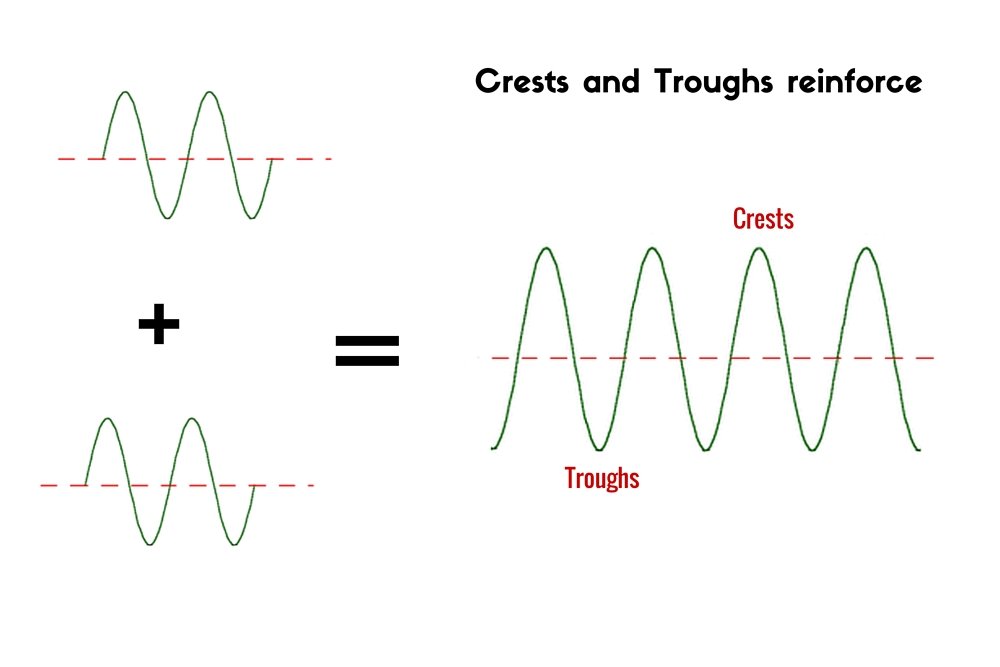 In simple, non-technical words, due to the difference in the thickness of the oil film, light rays have to travel different distances, and they then mix together after reflecting to produce a spectrum of colors.

Therefore, the appearance of colorful patterns on the road due to an oil film is a basic, yet mesmerizing application of the principles of optics in everyday life. Despite how cool the idea of oil slicks being miniature rainbows that have been disintegrated into countless tiny patches on the road… that’s simply not the case!

How much do you know about rainbow patches on the road?