Giraffes are herbivores, but they have been seen to chew on bones. One proposed reason is that the giraffes have a nutritional deficiency.

Giraffes are the poster children for herbivores. You’re likely to see pictures of them in school textbooks or nature documentaries peacefully munching on foliage from atop trees. The camera zooms onto their happy faces as they munch with their herbivorous molars.

You look away for a moment and then spot them eating a bone, and you begin to question the biology you’ve learnt so far.

A Giraffe Eating A Bone

I imagine a dropped jaw, wide eyes, and raised eyebrows on the faces of the researchers who first saw such behavior. Sitting in their safari jeep, donned in full ecologist camouflage, complete with a hat and binoculars, they probably said, “I can’t believe it!”

Evans followed a group of 11 Rothschild giraffe (Giraffa camelopardalis rothschildi) across the Maralal in Kenya between 1967-8. He noted that one female ate the stomach contents of a dead eland — a species of antelope — while another female briefly picked up the lower jaw bone of that dead eland. “The phenomenon of chewing bones and eating stomach contents has never previously been recorded for giraffe,” Evans writes in the paper.

It is one thing for a giraffe to move the bone around out of curiosity, but why chew on a bone? 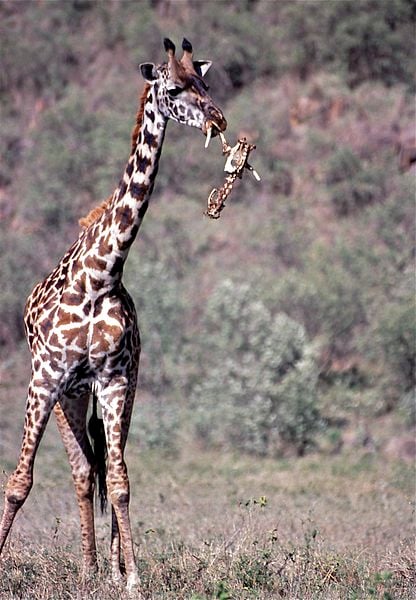 Giraffes primarily eat leaves, something nature documentaries did get right, and they eat a lot of them—about 2-4% of their body weight. If that doesn’t sound like much, remember that an average male giraffe weighs about 1,900 kg (4,200 lbs), which comes out to somewhere around 20 to 70 kgs (44 to 165 lbs) of leaves per day. Compared to their size, this isn’t a large amount.

So much leafy foliage isn’t all that easy to find in the African savannah, so they spend most of their day foraging and browsing. When they find what they’re looking for, such as the leaves of Acacia — a popular tree in every documentary about the African savannahs, including Faidherbia (white acacia), Terminalia, and Combretum (velvet bushwillow) species—the giraffes feast.

Also Read: Why Do Giraffes Have Long Necks?

They mainly like feasting on new leaves. These plants produce tannins to make the leaves bitter in order to deter herbivores like giraffes from eating them. Newer leaves, that are much higher, don’t have as much tannin. (Source) 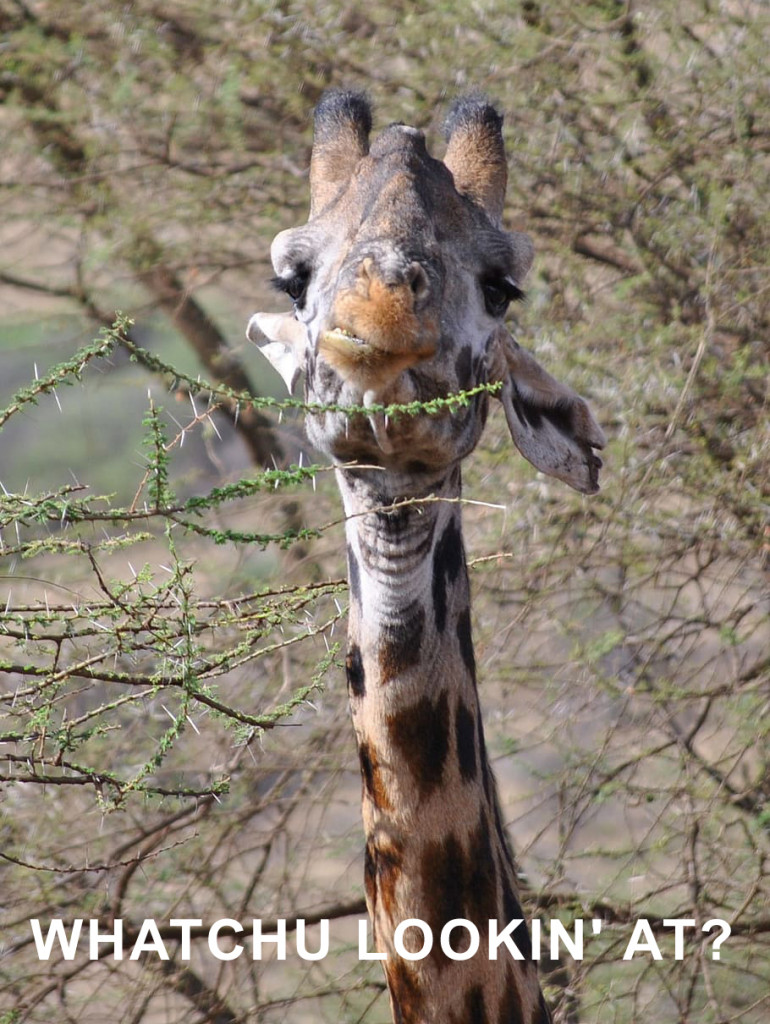 These trees are rich in nutrients, such as proteins and essential nutrients, including calcium, a nutrient the lanky (~16 feet) giraffe needs, but a purely leafy diet doesn’t always give them what they need.

When researchers first noticed such behavior, they must’ve been puzzled, but not entirely perplexed. This wasn’t the first time they’d seen a herbivore chew on bone. Cattle (and other ungulates—animals with hooves) also chew on bones, and researchers don’t need a visa to observe this behavior. The hypothesized reason for this behavior is a lack of calcium and phosphorus.

Many plants aren’t rich in calcium and phosphorus. Calcium can still be found in enough quantities in some plants, like the giraffe’s favorite, Acacia. However, phosphorus is a harder mineral to come by for a herbivore, and with bones as long as a giraffe’s, it becomes absolutely critical to get that phosphorus.

Fortunately, bones are high in both calcium and phosphorus, and the wild savannah does have a few carcasses lying around. Researchers have found that such behavior increases during the winter months when food is scarce and the nutrient quality of the plants decline.

Other tall herbivores have also been seen to pick up bones, antlers and even ivory.

Giraffes don’t swallow the bones whole. Instead, they seem to chew on the bone, scraping at it until all the nutritional juices come out. Many carnivores perform a similar sort of chewing behavior.

Also Read: How Do Snakes Digest Their Food Without Chewing It First?

This scavenging isn’t restricted to bones. Giraffes have also been seen eating the earth itself. Evens noted, “The chestnut-colored female at Maralal licked salt and picked up a stone, which suggests that there may have been a mineral deficiency in the diet.” This behavior is called geophagia.

Humans, the only animals that study themselves and other animals, as far as we know, like to put things in boxes. We’ve neatly categorized and labelled anything and everything we can see. You could say that it gives our lives some predictability in this unpredictable ball of matter on which we live. We label an animal as carnivorous if it only eats meat. The same goes for herbivores with plants, and omnivores with anything. In our attempt to label and classify the world around us, we have learned more about the natural world than ever before, but not every label fits every time! Just remember, when we encounter the natural world, there’s still plenty out there to awe us.