Strong winds, extended droughts and extreme temperatures have combined into a disastrous fire season for Australia that is largely being aggravated by climate change.

This is the impact so far of the wildfires that have been ravaging Australia since September of 2019. Four months on, and the blaze has not stopped. In fact, it has only claimed more lives, covered more ground and become so uncontrollable that weather prediction systems have become largely unreliable. Every state and territory is suffering with its own wildfires, but New South Wales and Victoria are being hit the worst; red skies choked with ash and smoke can be seen in most parts of these states, and can even be observed from space.

If all the fire fronts in the state of NSW alone were laid out in a straight line, it would cover the distance from Sydney to Afghanistan—across the Indian Ocean! 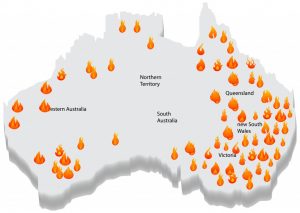 All of Australia is on fire, but the states of New South Wales and Victoria are hardest hit (Photo Credit : M. A. KAYUM/Shutterstock)

Very few Australian wildfires in the past (or as they are locally known, bushfires) have been as widespread or furious as the 2019-2020 fires. The Black Saturday fire that occurred for a month around February 7, 2009 accounted for 173 deaths. Only one million acres were burnt, but it remains the worst Australian bushfire event in terms of loss of life. February of 1983 saw Ash Wednesday—the second-worst bushfire event behind the Black Saturday fires—where 47 people died and about 500,000 acres were burnt (Source).

Since September, the current wildfires have scorched 24 million acres so far. This figure excludes the Northern Territory, which reportedly has upwards of 14 million acres burnt. The horrifying Amazon rainforest fires that began in January of 2019 covered about 6 million acres—a fourth of the area of the Australian fires! (Source) 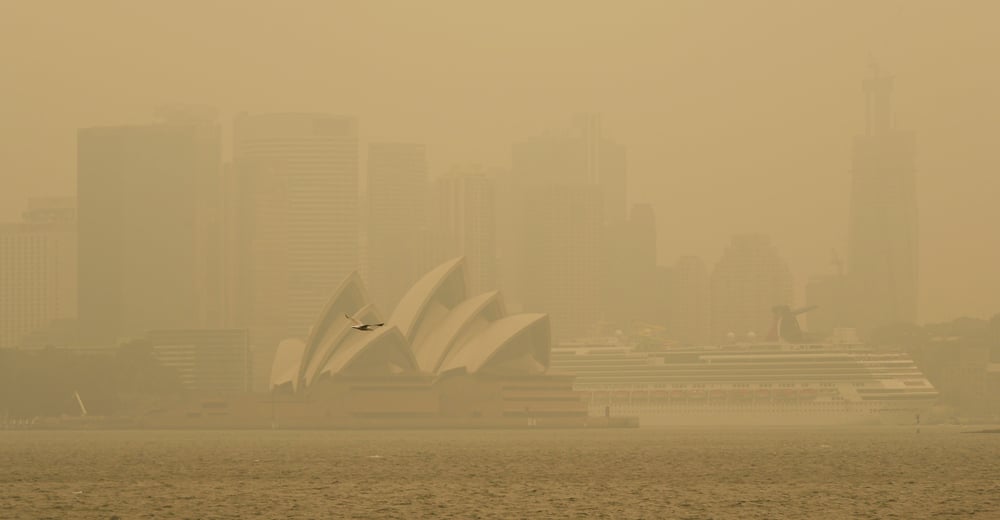 The iconic Sydney Opera House in the state of New South Wales is barely visible through the blanket of smoke laying thick over the entire state (Photo Credit : M. W. Hunt/Shutterstock)

Clearly, Australia is no stranger to bushfires: the hot, dry summers that plague the continent frequently create perfect dry bush fuel systems that require only a stray cigarette, a flash of lightning or plain, deliberate arson to trigger an uncontrollable and destructive fire. It is the driest continent in the world, with most of the landmass composed of hot desert, save for the Eastern, Southwestern and Southern coasts. 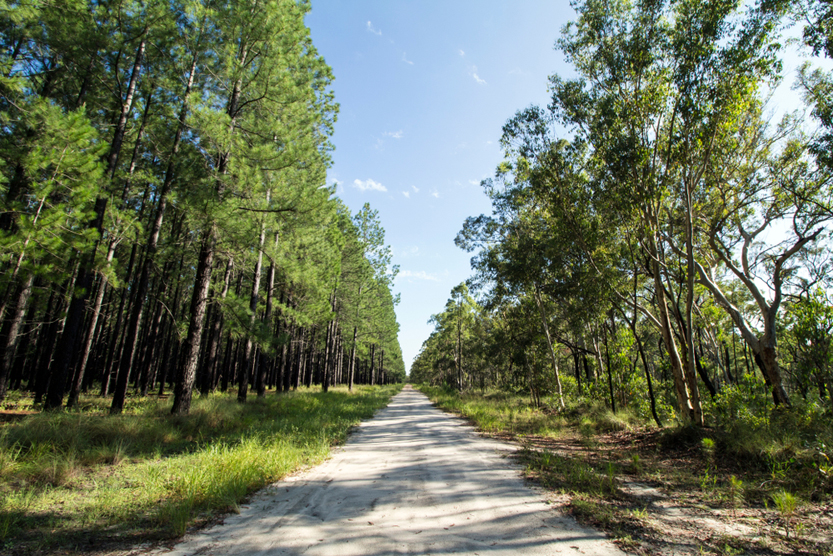 Unfortunately, the usual groundwork this past year has clearly failed to forestall the intense forces of nature. What’s so special about the fires of 2019? 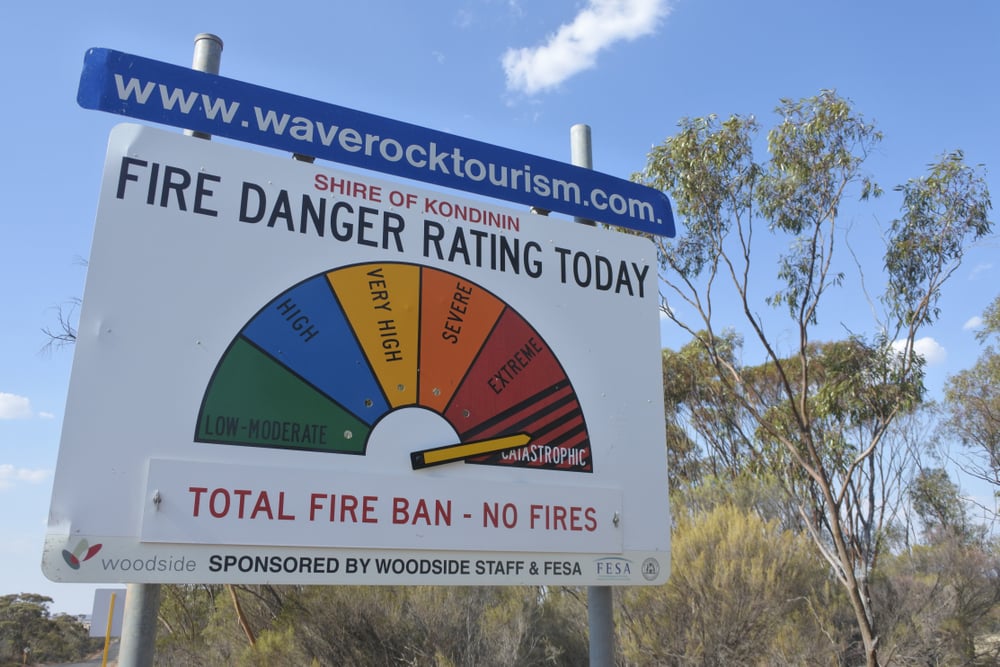 Local governments keep the residents informed of fire warnings, sometimes with the help of signs like this (Photo Credit : ChameleonsEye/Shutterstock)

It’s not coming up, and it’s no longer talked of in the future tense. Climate change is here, evidenced by the devastating spike in calamities, freak weather phenomena, extreme climatic conditions and record-breaking temperatures on our planet. What has made this brushfire season so much worse is a calamitous confluence of extreme and extended drought, heat waves and strong winds.

Temperatures: December 17, 2019, saw Australia’s hottest average temperature ever recorded, at 41.9 °C. The previous record had been set just the day before at 40.9 °C, after reaching 40.3 °C in 2013. The normal average summer temperature of Australia stands at about 27.5 °C, a good 15 degrees lower than the average temperature during this part of a historic summer!

Also Read: Why Does California Burn Every Year?

Rainfall: The last few decades in Australia have been characterized by highly unpredictable and erratic rains. A report states that the northern regions of the continent have been receiving an unusually high amount of rainfall over the past 800 years. On the other hand, southern areas have had especially low levels of rainfall, and the droughts of the 20th and 21st centuries are possibly the worst seen in 400 years. The spring of 2019 was also the country’s driest spring on record (Source).

Australia’s east coast houses most of the major urbanized regions, such as Sydney, Melbourne, Canberra and Brisbane. That area has been on a declared drought since 2017, and it is still ongoing! (Source)

Winds: The massive and hot desert occupying most of the middle and northwest of the continent carries heated gusts of wind to most of the East and Southeast coasts. December winds reached speeds of up to 128 km/h. Seasonal strong winds are not unusual, but under the circumstances, they only serve to exacerbate the already severe fire conditions. What’s worse is that the winds have been changing direction in unpredictable ways, making firefighting even harder and more unmanageable (Source).

The bushfires have laid waste to vast swaths of lush forestland and destroyed the homes of humans and animals alike (Photo Credit : Jamen Percy/Shutterstock)

All these climatic conditions can be explained by three main phenomena that occur in the Oceania region. Caution: There are some confusing, but important, terms ahead!

El Niño is a climate cycle caused by shifts in warm water currents and pools in the Pacific Ocean, but it affects climatic conditions worldwide. The warm water pool of the Pacific is usually supposed to be present near Southeast Asia, but when El Niño occurs, this pool shifts eastward along the equator nearer to South America.

Consequently, it causes changes in wind and rainfall patterns due to varying evaporation rates from the ocean. Therefore, the warm water pool that brings much of the rain to the northern parts of Australia instead sucks out the moisture in the area during El Niño. Many severe droughts witnessed in Australia have been during El Niño years (1982, 1994, 2002 & 2006). This relatively common phenomenon also causes high temperatures (Source).

El Niño occurred in 2019, and reportedly ended in August 2019. This helped set up the landscape with hot, dry weather and parched vegetation that was just waiting to host a massive fire. 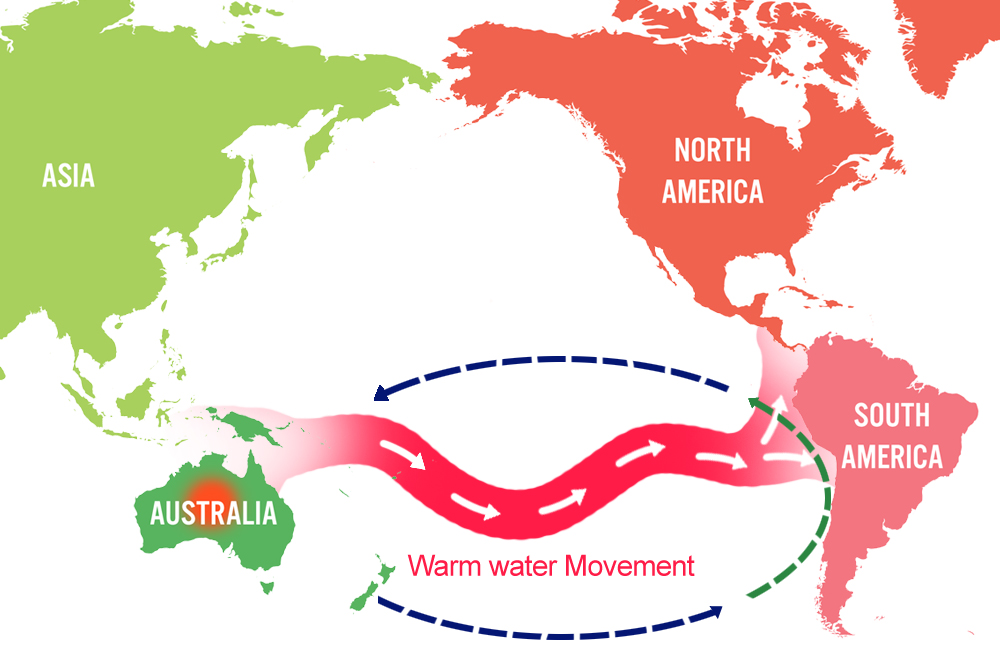 Next up is the Southern Annular Mode (SAM), which also affects Australian rainfall and temperature. The Westerlies are winds that normally bring rain to the continent and blow from west to east. Seasonally, these winds shift north and south, which is why the north and south of Australia get rain in different seasons.

The SAM changes the pattern of this North-South fluctuation by shifting the rain-bearing winds further north or south than normally expected. Thus, some areas experience unseasonal rain, while others drought. This year’s SAM left the Southeast drier than usual due to a northward shift of the westerly winds (Source).

Finally, to wrap up this spiel of technical terms, there is the Indian Ocean Dipole. The easiest explanation is to think of this as the Indian Ocean’s version of El Niño. There’s a warm water pool that cycles from the west to the east of the ocean. Around November, it’s supposed to reduce temperatures on the west coast of Australia and help bring on the monsoons. However, in 2019, climate change caused the IOD to be too strong and positive, which made the westerly winds much hotter and drier than they should have been (Source).

Australian firefighters are nearing their wit’s end. Most of the firefighters are volunteers, from Australia and abroad, and several have lost their lives already. Images of charred kangaroos and koalas caught in the flames have become tragic symbols of the devastation that this blaze has caused.

Also Read: How Exactly Do Wildfires Start In The First Place?

With the drastic drought still in effect, there is simply not enough water to fight the flames, and many believe that only sustained heavy showers can save the country. With some forecasted rains in the next few weeks, hope is driving the lives of those being affected in these terrible times. Ecologists fear that many species face extinction in the aftermath of the fire, in addition to decimating the population of the iconic koala at several locations across its habitat.

This time, it’s Australia, but next time (and there will be a next time), climate change could place anyone on the planet in the line of fire!