Blue firework are more difficult to create compared to other colors due to the weird chemistry that comes into play at higher temperatures. The instability of compounds that impart that blue color in fireworks is the culprit.

We have relished fireworks for millennia, and it goes without saying that they are vibrant and beautiful. Whether they come at a long-awaited annual ceremony or just a casual celebration, fireworks are a go-to feature to make those precious events even more memorable by lighting up the heavens. Fireworks flood the sky with brilliant bursts of white, gold, red, emerald, yellow and pink. 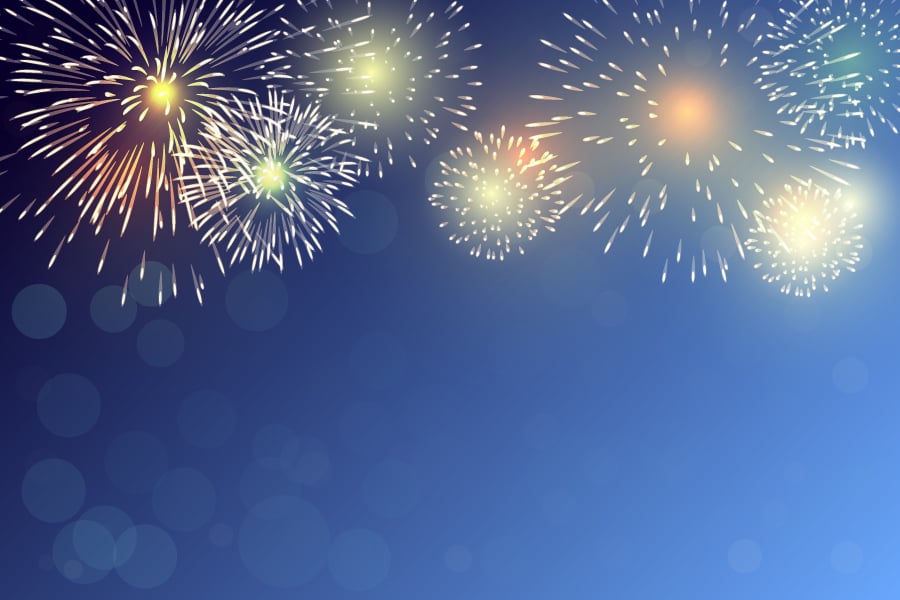 However, while gazing up at awe-inspiring bursts of fireworks in the sky, have you ever noticed that one color is generally missing?

Yes, blue is rarely present in a fireworks display, but why is that the case? What makes it so difficult to produce blue fireworks? Before we get into that question, let’s take a brief look at how we started using fireworks in the first place.

There is quite an interesting history behind why humans invented fireworks. The Chinese were the first to make fireworks as early as 200 BC. In fact, the invention and use of fireworks occurred quite serendipitously. It took more than a millennium for fireworks to be used as a means of celebration. The original fireworks in China were designed to scare away evil spirits with loud noise and bright lights. Those fireworks were very loud and not as tightly controlled as the fireworks we see today.

Italians in the seventeenth century figured out that by adding certain chemicals to the fireworks, bright colors like red, yellow, or white could be created.

Since then, pyrotechnicians all over the world have been trying to effectively create “blue” fireworks, but they haven’t really succeeded, so why are blue firework so elusive? John Conkling, director of the American Pyrotechnics Association, reckons that blue is very difficult to achieve, as compared to colors like red, orange, white, or yellow, due to the weird chemistry that comes into play at higher temperatures. The instability of compounds that impart that blue color to fireworks is the culprit. To fully understand that, we need to understand how fireworks function.

Gunpowder with the coloring chemicals is held together by applying special pyro glue. A fuse is the pyrotechnic-initiating string, the part with which you ignite the firecracker. All of these elements are finally encased in a pellet, which we use as firecrackers!

Also Read: Science Of Fireworks: How Come Are They So Bright And Colorful?

When you shoot the lit pellet into the air, the fuse starts burning up, and eventually sets off the gunpowder, which explodes. This explosion heats the color-producing metal salts, causing them to glow, and BOOM! You get fantastic sparkling showers of colorful fireworks! It turns out that the hotter you can get color-producing chemicals in the flame, the greater the emission in the form of light. In other words, it will result in brighter colors.

But there’s a problem…

If the temperature gets too hot, it will break down the color-producing chemicals and wash out their colors. Additionally, some coloring chemicals are more resilient than others. Strontium chloride, for example, which imparts the red color in fireworks, can easily withstand temperatures up to 1500o Fahrenheit. However, copper chloride, which is used to create blue fireworks, is far more fragile. As soon as it gets hot enough to impart a blue color—around 1000o Fahrenheit—it starts to break down and fade.

To offset this issue, pyrotechnicians need to add more chemicals to copper chloride, such that the mixture can get hot enough to retain its blue color without fading. As it turns out, despite centuries of work in this direction, we aren’t quite there yet!

Although we have found some alternatives, they are either too expensive or too dangerous to be used in fireworks. For example, arsenic was used in some fireworks long ago to generate a blue color, but manufacturers soon realized that arsenic was too toxic to be used in firecrackers and stopped implementing that clever solution.

Blue Sky In Contrast To The Background

Another problem associated with making blue fireworks is that the color of the sky in the early evening is also blue. This makes many shades of blue go unnoticed in the sky, in contrast to the background. To brighten them up would require higher temperatures, and higher temperatures mean the bright blue color will be washed out, as explained above.

Also Read: What Are Cool Flames And Why Can’t We Make Them On Earth?

If you think about it, the color blue in itself is elusive. It is one of those colors that is very hard to find in nature. Even so, blue happens to be one of the most liked colors.

Even if we haven’t managed to create sparkling bright blue fireworks yet, John Conkling, the pyrotechnics expert, is still hopeful. He says that there are a few ongoing studies to find a suitable and safe chemical to impart blue color to fireworks, so, there could be a breakthrough in the future! Perhaps one day we will have American flag-colored fireworks of sparkling blue, red and white for the 4th of July!