If you stop brushing your teeth, you will develop plaque, which will lead to gum disease and tooth decay. You may also experience halitosis (bad breath), and your teeth may become loose and fall out. Additionally, not brushing your teeth can cause damage to other organs in your body, and may even lead to dementia, heart disease, stroke, or cancer.

You know those nights where you’re lying in bed and suddenly realize that you forgot to brush your teeth? Your first thought is often, “Do I really need to get up?” Well, skipping one night won’t be the end of the world, but what if you quit brushing your teeth for a very long period of time—or even forever?

Dentists often recommend brushing your teeth at least twice a day, but that’s not all. To prevent the build-up of plaque, they might also advise you to floss daily. With all that swishing and spitting going on, it’s easy to wonder why brushing is so imperative, which further leads to some interesting speculation about what would happen if we entirely quit brushing. Well, it’s actually much grimmer than you may think… Mouth – the Perfect Place for Bacteria

Mouths are dirty, dark and moist places—a perfect abode for bacteria. Amazingly, one mouth may contain a bacteria population that outnumbers the human population on Earth! Streptococci is one of the most common bacteria found in our mouth. Streptococci and its cohorts feed off the sugar and protein from the food that is left over in your mouth. When they are done partaking, they excrete a slimy substance called biofilm over your pearly white teeth. Consequences of not brushing for long

Although some bacteria are good and protect your mouth from even nastier bacterial invaders, an unchecked build-up of bacteria in the mouth is primed to do real damage. A major offender here is plaque—a grubby coating of bacterial film that survives on the residual sugars left over in your mouth. They produce enamel-eating acids that degrade your dental health by causing small holes, or cavities, and do damage to the enamel. 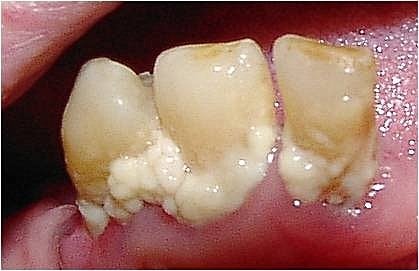 Have you ever noticed an unpleasant, greasy layer that settles on your teeth when you don’t brush for a day or so? That’s plaque, which helps bacteria adhere to the teeth, thus allowing them to produce more plaque, creating a vicious cycle of bacteria and plaque build-up. When we brush our teeth regularly, we are scrubbing away not only these excessive bacterial colonies, but also the food particles on which bacteria thrive, helping us clear out the plaque build-up.

Now, if you don’t brush your teeth for a week or so, there would be an enormous build up of plaque, which will lead to pretty nasty breath. Medically, this is called halitosis—a foul-smelling odor of the mouth. The extremely pungent smell comes from the plaque and decayed food that builds up when your mouth is not cleaned by brushing. If you don’t brush your teeth for about a month or so, you are likely to develop gum disease due to prolonged plaque build-up, which eventually turns into what dentists call super-plaque. The super-plaque colonizes your gum line, hardening into tartar and making it difficult for your toothbrush to clean between your teeth. Eventually, your gums will become so strained by the tartar that you will develop gingivitis—an inflammation of the gums caused by uncontrolled plaque build-up and tartar.

When gingivitis sets in, the immune system gets activated and takes some remedial steps, which can lead to pus formation in the cavities. The pus is protein-rich fluid filled with dead white blood cells, and your gums will be extremely sensitive at this point, turning red when touched. They may even bleed if you exert pressure on them. Although this bleeding may be absent, gingivitis is a warning sign of worse things to come. Pervasive tooth decay causes excruciating pain. It’s also likely that you will need to beseech a dentist to pull out some of those aching, putrid teeth before they fall out themselves to ease the pain. Eating anything sugary, hot or cold will send you into unbearable pain.

However, that’s not the end of this appalling journey. If you avoid brushing your teeth for years, you’re likely to cause damage to other vital organs of the body. Wonder how? Well, your mouth is the doorway to the rest of your body. Inhabiting bacteria that developed plaque can dig deeper inside your gums and get into the blood. Once it gets into the blood, the bacteria can invade other systems in the body. Although clinical research is ongoing, gross negligence of dental health—like not cleaning your mouth for years—may contribute to a number of fatal conditions you’d never expect, including dementia, heart disease, stroke, and possibly even cancer.

Brushing your teeth twice a day and flossing them daily is just a small price to pay for healthy dental hygiene, sweet breath and a shining smile!