Home
Humans
What Happens When You Bleach Your Teeth?

Bleach acts on the compounds that color our teeth (like the colored compounds in tea, coffee and wine). Bleach changes the chemical structure of the compound, which causes the compound to turn colorless, giving the appearance of white teeth.

In the world that we live in today, a great deal of awareness has been generated about dental health. Apart from cavities and related tooth problems, the area that has stepped into the limelight is tooth whitening or bleaching. In fact, a survey conducted amongst dentists stated that a whopping 87% of dentists in the U.S that perform tooth bleaching and whitening procedures were in great demand. 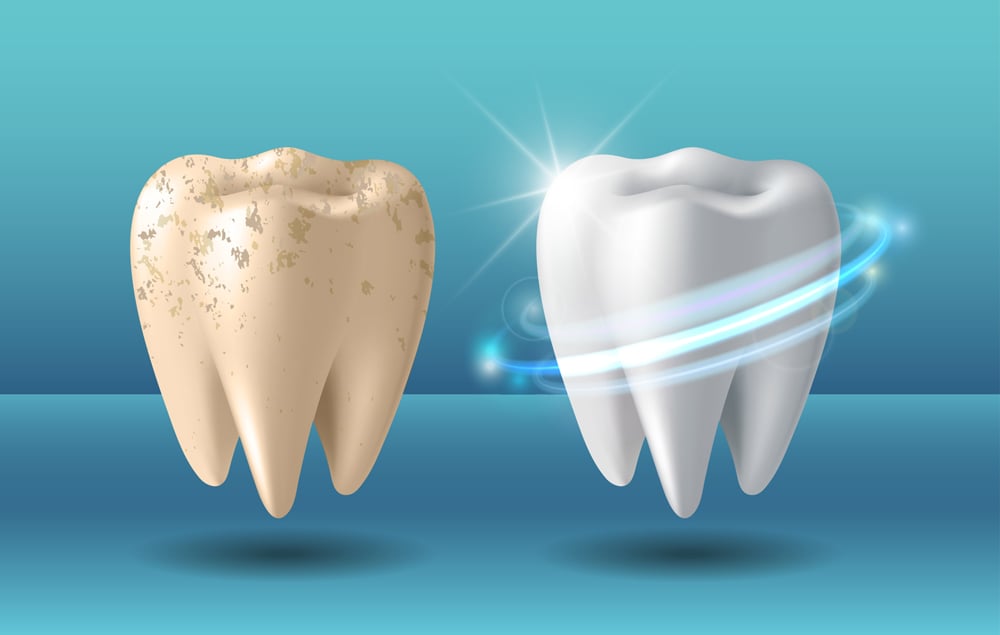 Why are teeth white?

Our teeth are made of different layers. There are the two hard and protective exterior layers, the outermost is called enamel and the inner section is dentin, along with the interior soft tissue.

The enamel is the hardest layer of a tooth; its hardness comes from its chemical composition. Enamel, much like our bones, is composed of large amounts of calcium in the form of hydroxyapatite. Hydroxyapatite in its natural state is white in color, which is why our teeth are white.

However, with age, wear and tear, as well as the consumption of pigmented substances like tea, coffee, wine, and cigarettes, the whiteness of our teeth is compromised, and they take on a yellowish tinge. 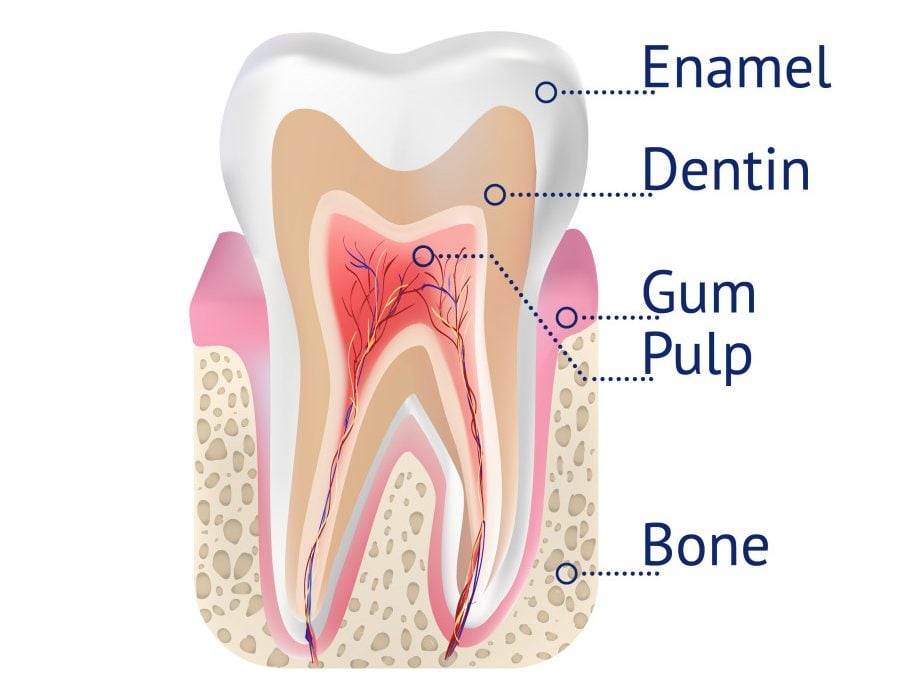 The colored compounds that our eyes perceive as stains are essentially chromophores. These chromophores are usually yellowish or brownish in color. Stains visible to us may be “intrinsic” or “extrinsic”.

Extrinsic stains are superficial stains on the enamel. With some substances like tea and coffee, the color of the substance is the same as the chromophore and are called direct stains. Other substances are colorless, but still stain teeth when they chemically interact the enamel. This is called indirect staining. A good example of this is mouthwashes containing chlorhexidine. Chlorhexidine is a antiseptic added to mouthwashes that keep dental diseases like gingivitis at bay, but the chemical also ends up staining the teeth.

Most extrinsic stains can be eliminated mechanically by brushing or chemically by bleaching or whitening procedures. Additionally, you could abstain from foods that stain your teeth, like tea and coffee.

In some cases, intrinsic staining can occur before the teeth have emerged into the oral cavity. A variety of factors, including certain metabolic disorders, the use of wide-spectrum antibiotics like tetracycline, or the intake of excess fluoride (fluorosis) during the formative stages of tooth development can cause this premature staining.

Intrinsic stains that occur after the teeth have emerged are often due to large silver fillings, which were commonly used before modern tooth-colored fillings emerged, or as a result of trauma to the tooth.

Trauma to the tooth is when a tooth gets hurt. Imagine that your sibling punched you in the face, and while it hurt in the moment, you stopped thinking about it a couple days later. After a few years, however, you may notice that a tooth or two seem to be a different shade than the rest. What transpired is that the trauma (the punch) caused blood to leak into the inner layer of dentin, which stained the tooth from within.

It is much more difficult to deal with intrinsic stains and they often require invasive procedures.

Tooth whitening is not a recent trend, but has actually been around for centuries! White teeth were a status symbol for Egyptians and since our modern sophistication of teeth whitening procedures was not available to Egyptian folks in 4000 B.C., they used twigs and vinegar to whiten their teeth. Ancient Romans are also known to have used urine to clean their teeth! The thought process was that the ammonia in urine would bleach the teeth. Fortunately, we now have several sophisticated delivery systems and well-researched chemicals that can be effectively used for whitening.

Whitening toothpaste is the most common whitening product. These toothpastes have a higher amount of abrasive agent, which helps them scrub off stains. Although such toothpastes may remove superficial stains, they do not provide a massive change in the shade of one’s tooth color.

Whitening mouthwashes that contain hydrogen peroxide are another common whitening product. They work better than whitening toothpastes in that they do whiten teeth more. They must be used regularly for about 3 months to show some shade difference.

Whitening gels and strips probably work the best out of the commercially sold whitening products. Tray whitening systems are also available at drugstores, but are more commonly handed out at dental clinics with instructions to load the trays with bleaching materials, and the duration you should use/wear them will be outlined by the dentist.

In-office whitening or bleaching techniques are solely carried out by dentists. This is what we commonly refer to as chemical bleaching. Since it has a higher concentration of bleaching chemicals than over-the-counter whitening products, the results are more noticeable, but the cost may also be higher.

The chemistry behind chemical bleaching 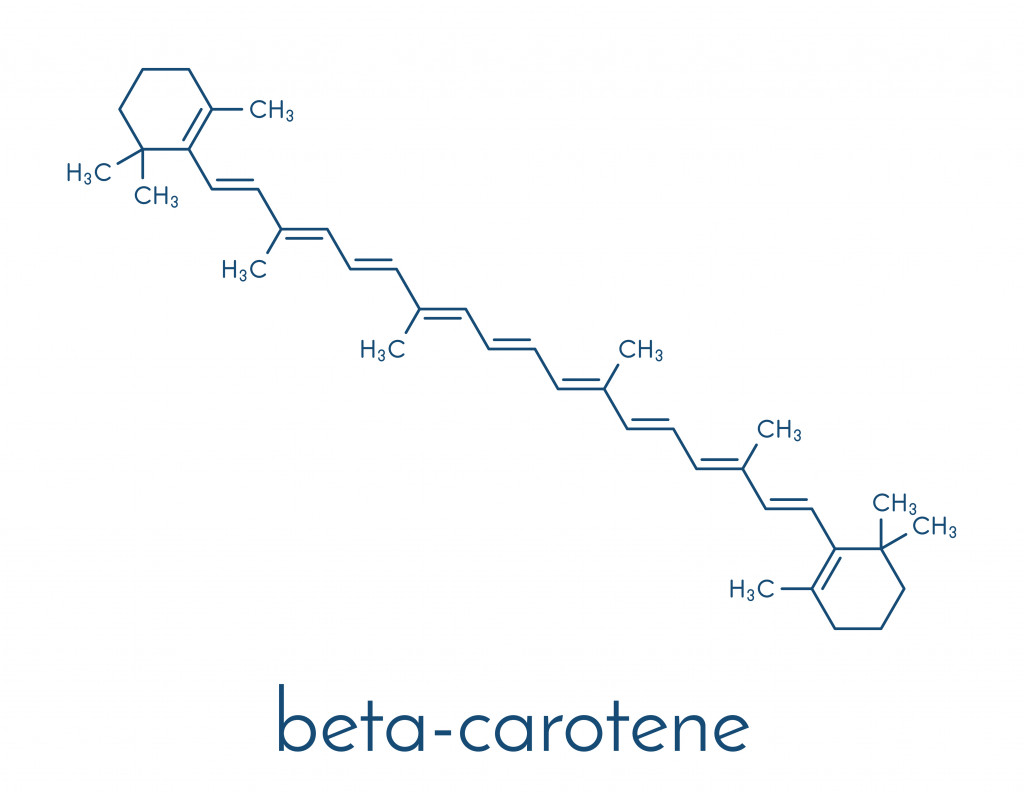 Beta-carotene is a chromogen that stains the teeth orange. It is present in many orange-red fruits like carrots. (Photo Credit : StudioMolekuul/Shutterstock)

Bleaching is essentially an oxidation reaction where the bleach (hydrogen peroxide) oxidizes the double bond in tooth stains (chromogen), causing the chromogen to change its chemical structure. As a result, it becomes a lighter-colored compound and gives the effect of increased whiteness.

For intrinsic stains that occur from chromogens with metallic compounds, a more effective way to whiten the tooth is to use veneers or crowns, rather than a chemical bleach.

Is there a down-side to chemical bleaching? 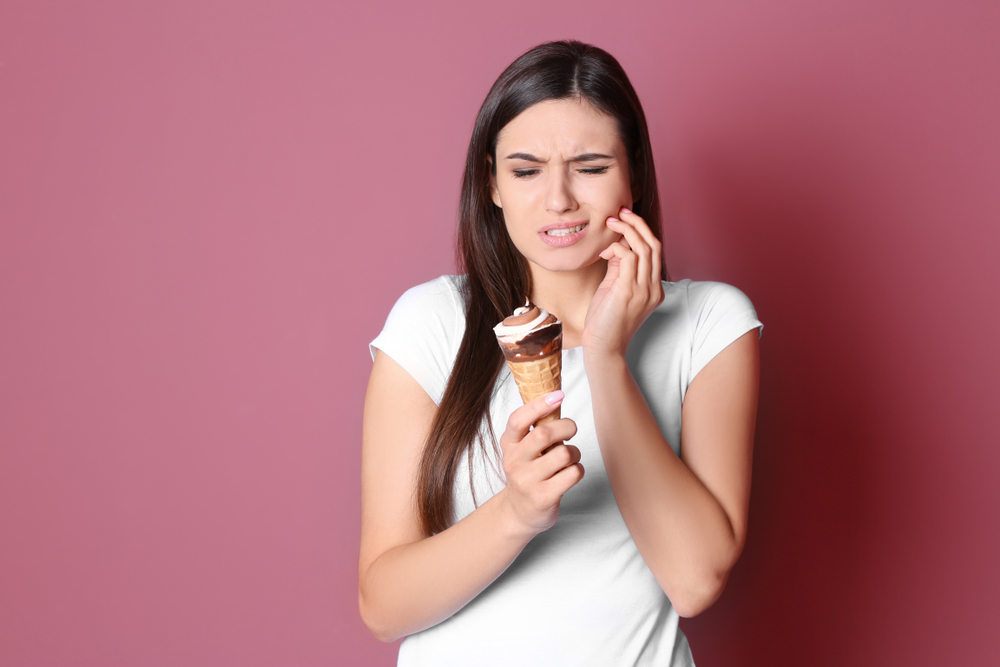 Like most things in life, bleaching has its pros and cons.

If the bleaching agent comes in contact with your gums or tongue, it may cause soft tissue burns, and while the application of antiseptic ointments can alleviate the effects of such a burn, one needs to be very cautious while handling bleaching materials. If ingested by mistake, bleaching agents may also cause minor stomach upset, but thankfully, the small concentration is not known to affect us in a significant way.

The effect that matters the most is how bleach affects the teeth. It has been observed that aggressive bleaching tends to increase the surface roughness of enamel and causes the enamel to demineralize. This causes teeth to become porous, which in turn causes sensitivity. One should be aware that they may experience increased sensitivity after a bleaching regimen. In fact, this phenomenon is more prominently experienced by those people who have previously filled cavities and then undergo bleaching.

We all know that no one wants yellow teeth, but that doesn’t mean you should go running for a bleaching procedure every month. It is, after all, a chemical process, and while it may not cause any major side effects, it can cause a few undesirable effects. A good thing to keep in mind is to always bleach at a  dental clinic under the supervision and control of a dental professional with an interval of two weeks between two bleaching procedures. If you follow this basic rule, the risks associated with bleaching will be minimal, as you’ll have a professional to advise you!

The short URL of the present article is: http://sciabc.us/9mb7t
Help us make this article better
Prev Article Next Article
About the Author