While watching the 2016 Summer Olympics in Rio, it was easy to get carried away with the glitz, glamor and excitement of the world preeminent sporting event. However, bringing all the world’s greatest athletes to the same place and having them compete also brings an element of patriotism and politics into the mix, which needs to be handled with a great deal of diplomacy and tact.

One of the most interesting and delicate examples of this relates to Mainland China and Taiwan. More specifically, in the Olympics and other international events, Taiwan is referred to as “Chinese Taipei”. This can be quite confusing, particularly for people who don’t understand the fragile history of the conflict between these two nations.

So, if you were wondering where the heck Chinese Taipei was on a map while watching Hsu Shu-ching win the women’s weightlifting gold for that country, perhaps this article will help. Before we get into the nitty-gritty of the name, we’ll need to have a short history lesson about China.

The Evolution of China

The 20th century has been a tumultuous time in Chinese history, and while the nation has been around for more than 3,500 years, the past 70 years has been particularly intriguing. The history of China is fraught with empires, eras, rebellions and political shifting, and back in 1949, the latest upheaval took place. The Kuomintang (the Nationalist Party of China) had been in power for roughly 40 years, but the Communist army led by Mao Zedong, overthrew this government before the midpoint of the century during a brutal and bloody civil war.

The Kuomintang had led the Republic of China (ROC), but they had been ousted by the Communists, who eventually established the People’s Republic of China (PRC). However, 4 years earlier, in 1945, that same Kuomintang had taken control of Taiwan back from the Japanese after the end of World War II. Previously known as Formosa, Taiwan is an island nation roughly 100 miles off the eastern coast of China. This 14,000-square mile island was in the control of the ROC, but after the Communists chased the Nationalist Party out of Mainland China, they retreated to Taiwan. Under the strict martial law rule of Chiang Kai-shek, Taiwan had become an independent entity, the last bastion of the ROC. 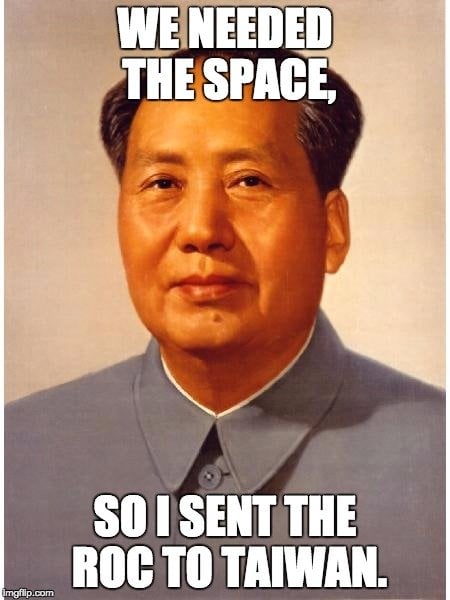 Although many people look at Taiwan (Chinese Taipei) as a relatively modern outcome of the Communist victory in 1949, Taiwan has actually been inhabited for tens of thousands of years, and has been a critical point throughout history. Its closeness to Mainland China has made it an important trading hub and transportation capital, and it has been owned or controlled by a number of different nations in the last millennium. From aborigines and Chinese settlers to Dutch colonists and Japanese conquerors, Taiwan had changed hands many times.

However, in modern times, the ROC’s desire for Taiwan to be acknowledged by the rest of the world as an independent nation is more complicated than you might think, and once again, requires a bit of history.

From the Perspective of the West

Throughout much of the 20th century, Communism has loomed as a terrifying specter of death and destruction (at least from the perspective of the United States). Decades-long campaigns and Cold Wars have been fought based on the attempt to disavow and stop the spread of communism. Therefore, when Mao’s army took control of China in 1949, it was a terrifying time for capitalists and democracy-lovers in the West.

Initially, most democratic countries continued their support of the ROC, now isolated on Taiwan. However, it became more and more clear that the PRC was going to retain control of Mainland China. Over time, the PRC became more established in the international community, and allegiance to Taipei (the new capital of Taiwan) eventually shifted back towards Beijing. This was most notable in 1971, when the United Nations officially recognized and welcomed the PRC as a member. 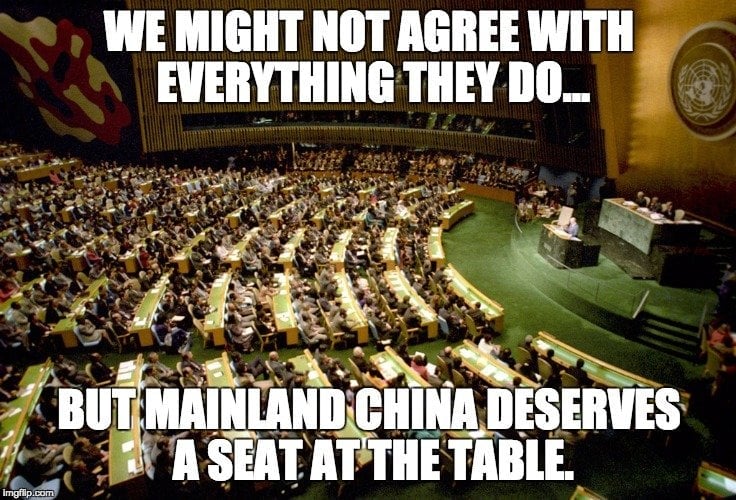 While Taiwan is certainly an economic force, considered one of the “Four Asian Tigers”, it simply cannot compare to the massive industrial and commercial power of Mainland China, with its more than 1.3 billion people. Therefore, the international community needs to deal extensively with China, while also negotiating the touchy situation of Taiwan, which is the form of government that most democracies “prefer”.

This entire situation became ever more complicated in the 1980s, when the island nation went through a number of democratic reforms. This came to a head in 1996, when Taiwan went through its first-ever direct presidential election, bringing it even closer to the ideals and policies of the United States, and yet, the need to pacify China, the slumbering superpower, kept most democratic countries from acknowledging or interacting with Taiwan.

In fact, the United States had a long-standing policy of no direct contact with Taiwanese leadership for the better part of 40 years; this was a delicate peace that Donald Trump recently broke by accepting a phone call from the president of Taiwan, Tsai Ing-wen, to congratulate the President-Elect on his victory.

What’s the Deal with “Chinese Taipei”?

Given the complex nature of the situation between Mainland China (PRC) and Taiwan (ROC), there needed to be some neutral ground or name when both entities were participating in the same international events, such as the Olympics, Paralympics, Asian Games, World Cup, etc. Mainland China and Taiwan both claim sovereignty of the island nation, but Taiwan’s ROC refuses to be labeled as being under the PRC’s control.

The real problem began with the name of the Olympic Committee. Each nation has one, but Mainland China and Taiwan were both calling their “the Chinese Olympic Committee”. This was unacceptable confusing, but the debate didn’t stop there. In terms of how athletes and teams would be introduced, up to that point, Taiwan had been introducing its athletes as being “from China”. In 1976, however, Taiwan was not allowed to use the name China, since the PRC was internationally recognized and had the right to refuse another entity from using their name. Taiwan boycotted these Olympics, but agreed to participate in the 1984 Olympics once the name issue had been settled.

An ambiguous name was required, one that didn’t suggest sovereignty of Taiwan over Mainland China, nor control of Taiwan by the PRC. Using “Taiwan”, “Chinese Taiwan” or “Taiwan, China” suggested that the island nation might still be subordinate to Mainland China, and also ignored the other islands controlled by the ROC. Eventually, the ROC settled on Chinese Taipei, as it designated an ambiguous boundary of the ROC’s control. It suggested a clear separation between Taiwan and Mainland China, but not complete independence, which is why Beijing accepted this compromise.

As you can see, international relations are never easy, particularly when only 100 miles of water separates you from your ideological enemies. At least the Olympics will be peaceful, now that no Chinese nations will step on one another’s toes… or names!

So, why is Taiwan called Chinese Taipei? Take this quiz!