When we think about the Olympic Games, many different things come to mind… the opening ceremonies, athletes competing from all over the world, dramatic climaxes and tears being shed on the awards podium. However, there is one simple item that may be more iconic of the Olympic Games than anything else – the gold, silver and bronze medals.

Winning Olympic gold has become the ultimate mark of expertise in your sport, and the legendary nature of becoming an Olympic champion has made these medals an inseparable part of the competition. Gold, silver and bronze medals are seen in many different sports and competitions in modern times, but where did the tradition begin? Why is hanging a bit of metal around someone’s neck a way of celebrating an incredible achievement?

Short Answer: The medals weren’t always gold, silver and bronze; the modern use of these precious metals is believed to be derived from various mythological ages, and is also due to the metals’ composition, availability and rarity.

The History of Olympic Medals

As most people know, the Olympic tradition dates back to ancient Greece, more than 2,700 years ago, where the greatest athletes were gathered for an extended athletic tournament every four years at Olympia, a famous valley near the ancient city of Elis. There were certainly awards for the victors of these ancient games, but the top prize wasn’t a gold medal. In fact, the winner was given an olive wreath and a silver medal, while the runners-up received a laurel wreath and a bronze medal. The wreaths were given to honor Zeus, the king of the gods.

Fast-forward more than 25 centuries to 1896, when the tradition of the Olympics was revived in Athens, Greece. In these modern games, the winners of each competition were given silver medals and olive wreaths, while second place received copper medals and third place received bronze medals, slowly moving closer to the three-tier system we recognize today. 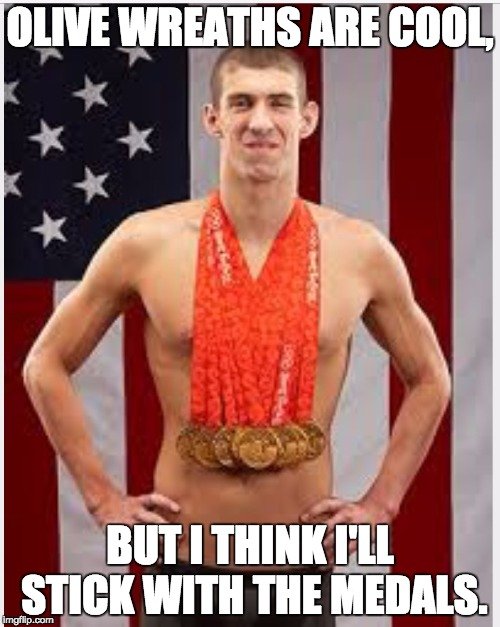 The 1900 Olympic Games in Paris took the style of awards in a new direction, and victors were given cups, trophies, and valuable pieces of art to honor their victory. There was no established rule at this point regarding awards, and it was left up to the judgment of the host country.

In 1904, when the Olympics were first held in the United States, near present-day St. Louis, gold medals made their first appearance. Second place earned silver, and third place received bronze. Since then, every subsequent Olympics has used these three medal varieties as their prizes. However, it is interesting to note that the Olympics were not the first sporting event in modern times to use these precious metals for medals, but it is certainly the most famous example.

The Winter Olympics are slightly different, and are not as strictly regulated by the IOC (International Olympics Committee) in terms of medal composition. Throughout history, Winter Olympics medals have included non-precious metals, such as glass and lacquer. While it appears that gold, silver and bronze medals are here to stay for the Summer Olympics, that doesn’t explain why these are the chosen elements for such a symbolic and prestigious prize.

Why Gold, Silver and Bronze?

There are a number of possible explanations for the choice of gold, silver and bronze as medal materials, but first, it is important to define what these elements are. Bronze, to begin with, is actually the element copper mixed with small amounts of other metals, such as tin. Therefore, when we look at the periodic table of elements and search for the medal materials (Cu, Ag and Au), a strange thing becomes clear…

All three elements are in the same column (1B), with atomic numbers of 27, 49 and 79. For those who don’t know, elements in the same column of the periodic table tend to have very similar properties. This particular column has one very important property if you want to make something that will not break down (e.g., an award that you want to last for a long time) – they can be found in a pure or native form. This is different from many other metals, which are usually only accessible in their native form after undergoing various chemical reactions.

In other words, these elements could simply be dug out of the ground in a pure form, or in the case of silver and copper, in a form that was weakly bonded to oxygen or sulfur. Once humans learned how to easily produce pure forms of these metals, they became widely used to create tools, currency, art and many other things. These metals are also easy to manipulate and shape, with relatively low melting points, making them ideal candidates for small, carefully crafted items, like Olympic medals.

There was also an inherent value on these metals due to their relative scarcity. The amount of these minerals on Earth and in the ground was the result of mineral deposition during the creation of our solar system and planet. Higher-density elements are far more rare in the universe, and the same thing is true for their presence on Earth. Copper (easily made into bronze) is much higher on the periodic table, and is found much more frequently in the ground. Silver is slightly less common, being one level on the periodic table down, and gold is the rarest, possessing the highest atomic number and being the hardest to find of these three precious metals. 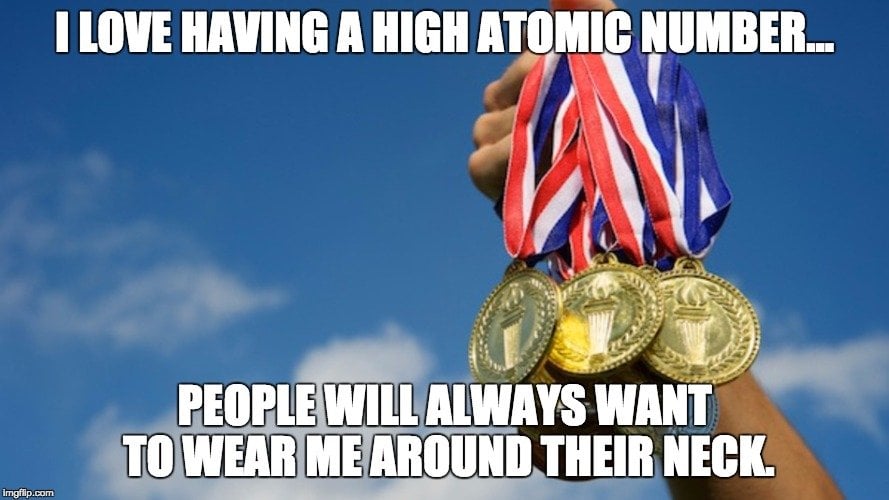 Therefore, when you think about it, the order of the medals, increasing in importance from bronze–>silver–>gold is based on the rarity of those elements, while their choice as medal materials is based on their physical composition and specific organic attributes.

Now, for all of you who are eager to go out and win a gold medal, since that amount of solid gold would be worth tens of thousands of dollars, you should know that modern Olympic gold medals are actually made of mostly silver. The gold color comes from the 6 grams of pure gold gilded on the outside, making up just over 1% of the medal’s total volume.