Superstitions can primarily be seen as mechanisms to cope with uncertainty and fear. Superstitious behavior is a product of two variables—the production of an error by System 1, and the failure of System 2 to correct the error.

Have you ever said something foreboding and immediately knocked on a piece of wood? Or picked up a penny from the street because it brings you good luck? We all do something like this— a personal tradition, or a habit.

Millions of people wish on stars, cross their fingers for luck, and believe that bad news comes in threes.

Despite being a rather intelligent species with well-developed brains, we can’t seem to stop believing in superstitions, fearfully obeying them, and feeling relieved when a good omen appears. 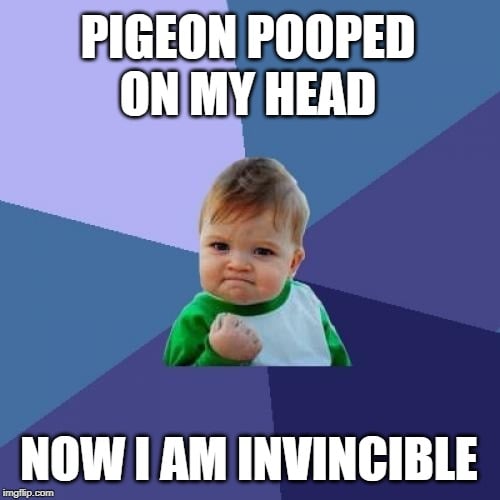 Superstitions are beliefs and practices for which there seems to be no rational explanation. They result from believing in a certain superior and supernatural evidence that doing or not doing something can cause fortune or misfortune in our lives. Superstitions are often defined as false beliefs, since there is usually no logical causal connection between the events and the actions that are said to magically influence these events. Moreover, science considers these beliefs to be not only wrong, but simply impossible. Even so, superstitions are highly prevalent in different forms across all cultures. They are a natural way of thinking about everything around us. So… what makes us believe in superstitions, even though they’re irrational?

The obvious reason that comes to mind while thinking of why we are superstitious is fear.

Many of our superstitions stem from the fear of the unknown, and can be seen as our attempt to cope with the stress associated with it. Bronislaw Malinowski, one of the most celebrated anthropologists of the 20th century, explains this by giving an example of the fishermen of the Trobriand Islands. He finds that the fishermen who face dangerous uncertainties of the sea are much more superstitious than those who fish in the relatively calm inner lagoon (Source).

Superstitions can thus be seen as a mechanism for us to feel like we’re capable of understanding, predicting and partly controlling the uncertain environment that surrounds our existence. Therefore, people who are exposed to more uncertainty, stress and anxiety have a higher chance of being superstitious than others. 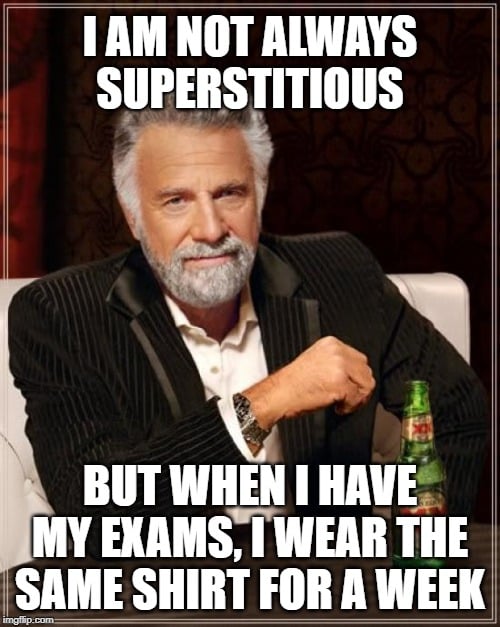 Before answering this, we need to understand a few things about our mind and how it makes judgments.

How Does Our Mind Make Judgments?

Psychologists Daniel Kahneman and Shane Frederick, in their dual process model (corrective model), suggested that two separate cognitive systems are involved in the process of thinking and reasoning. System 1 is the fast and intuitive system that quickly (and almost automatically) responds to judgment problems as they arise.

On the contrary, System 2 is a slow and methodical system. It deliberately uses reasoning to monitor problems, so as to either endorse or correct the suggestions of System 1.

Frederick developed a Cognitive Reflection Test to measure one’s ability to suppress an incorrect System 1 answer and come to a more thought-out correct answer. One of the questions in it was as follows:

Due to System 1, an intuitive answer spontaneously comes to our minds—ten cents. If we think just a bit more, however, System 2 will realize that this answer is incorrect. If the ball cost ten cents, then the bat and the ball would together cost $1.20, instead of $1.10. The correct answer must therefore be 5 cents, with the bat costing $1.05.

When we answer incorrectly (and say “ten cents”), it shows that we depended only on System 1, and didn’t give System 2 the time and mental resources to cross-check the answer. If we had engaged System 2, it would have almost certainly detected the error, overridden the intuition, and answered correctly.

However, what does this have to do with us believing in superstitions?

According to the mechanism described above, if System 1 in our mind produces a superstitious intuition, it will translate into our behavior, in the event that System 2 does not catch the error.

For example, on the night of a football match, a football fan might think “I need to wear my lucky shirt while watching the match”, and if System 2 does not intervene, he will wear his lucky shirt and be optimistic about the game. However, if System 2 is given a chance to step in—for example, if he is unable to find his shirt—he may be forced to reconsider his initial beliefs. If System 2 overrides the behavior by recognizing his belief as irrational, he will wear another shirt.

Therefore, superstitious behavior is a product of two variables—whether such an error is produced by System 1, and whether the error remains uncorrected by System 2.

Why Do Superstitious Beliefs Arise?

The human mind is biased towards similarity in its understanding of cause and effect.

Many tribes refrained from consuming the meat of slow animals because they believed that such a diet would make them slow too. Some people believe that consuming plants with long lives allows them to also live longer. In these examples, similarity has been assumed to be a proof of causality. However, similarity between two things does not always mean that one thing is the cause of the other. Another example of similarity-based beliefs is the Chinese aversion towards the number 4 (四, pinyin: sì, jyutping: sei3), because it sounds like the word for “to die” (死, pinyin: sǐ, jyutping: sei2). This results in people preferring to spend more and buy something priced at a higher price, instead of something that costs the unlucky price of $4.

Imagine that you’re sitting in class and the professor is choosing students at random to answer his questions. You may be thinking, “I am unprepared and will therefore definitely be called on”. You feel that you “tempted fate” by coming to class unprepared, and are thus more likely to be chosen by the professor.

People believe that anything they do or say might increase the likelihood of the opposite happening. For example, leaving your umbrella at home, thinking “It will not rain today”, will actually increase the probability of getting stuck in the rain later that afternoon.

This happens because the moment we think or do something to tempt fate, all the negative possibilities rush into our minds. Since negative thoughts are, by nature, more accessible, System 1 automatically makes a connection between tempting fate and negative outcomes, making us feel that these negative outcomes are especially likely once we have tempted fate in some way.

What is most comforting (and almost captivating) about superstitions is that they have the ability to provide an explanation for everything. System 1 frequently detects patterns that don’t really exist, and is capable of forming a cause-effect explanation about almost any two things. This means that if anything good or bad occurs in conjunction with a particular action, we readily jump to the conclusion that the action caused the outcome, which may not always be true. An example of this can be seen during sports matches. One of my friends decided to use the bathroom while watching a soccer match at my house last week. When he came back, he found that his favorite team had finally scored a goal while he was away. He believed that his actions (relieving himself) had caused the team to score a goal, so he spent the remaining time of the match in the bathroom!

In a similar way, many of our superstitions stem from this tendency of System 1 to take insufficient evidence and jump to conclusions.

These are just a few reasons why superstitions arise. However, if System 2 caught these errors, we wouldn’t continue to be superstitious. This begs the question—why doesn’t System 2 override and discard these superstitious intuitions as irrational?

Why Do Superstitions Persist?

One way of looking at it is to believe that System 2 is somewhat lazy and inattentive. In the earlier example of the bat and ball, people answered incorrectly because they simply didn’t take the time and effort to calculate the correct costs.

An interesting observation is that people sometimes continue to behave in a certain way, even after realizing that their behavior is irrational.

A study required people to pour sugar into a container and then label it as “Poison”. It was found that people, despite having poured the sugar themselves, later refused to consume it. They knew that their negative feelings were irrational, but they could not get themselves to shake their intuition away. Thus, another possible reason why System 2 might not override is that it is weak in the face of powerful intuition. It detects the error, but chooses not to correct it. 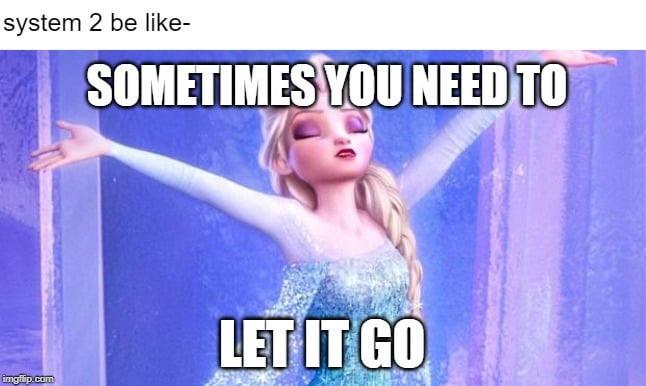 Yet another reason why superstitions continue to exist is confirmation bias. Confirmation bias is the tendency of our mind to favor information that validates our existing beliefs. For example, if we think that a certain person is “bad”, information that corroborates this thinking is more likely to jump into our minds, thereby confirming our initial thought.

Strangely though, people continually repeat the same superstitious behavior, even when the subsequent evidence clearly goes against it. For example, if a person believes that his favorite team wins their matches whenever he wears his lucky shirt, but then his team loses, he might dismiss the error by saying, “It doesn’t count because one of the main players was injured” or “It probably works when I wear my lucky shirt AND eat potato chips.”

Some people truly don’t believe in superstitions, yet they engage in superstitious practices. They might call themselves rational people and still forward a chain message that threatens bad luck if the recipient breaks the chain. They think: the cost of forwarding the message is negligible, but if there is even a remote possibility that the magical threats are true, the cost will be huge. Thus, even though they don’t believe in such a superstition, they think it’s only rational to protect themselves against it, just in case it does turn out to be true. 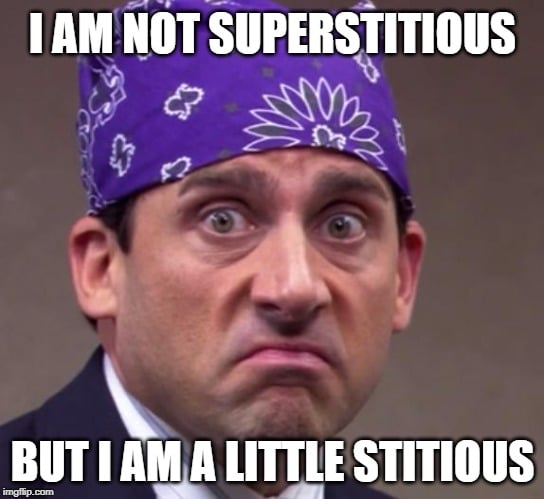 Superstitious or not, you can’t deny that superstitions are quite interesting—and not always bad! Like most other things, they can be healthy within limits, and are sometimes a charming piece of familial nostalgia. However, if you find yourself constantly fretting about the results of your superstitious behavior, it might be wise to break those (irrational) habits as soon as possible!