Family systems theory describes how the translation and emotional interdependence among members affect the personality and life choices of an individual.

Have you wondered why you were happy as a child when your father got a promotion? Did you just follow the cue that you needed to be happy? No, you really were happy. You saw your mom and dad were happy and their happiness in some form touched you as well. You might not have realized the potential benefits that your father’s increased income could be on your lifestyle; all you can remember is how happy the house seemed.

Family systems theory explains why you felt happy when you did. It also explains why you are so different from your siblings. It also helps you understand why you enjoy spending time with some members while you stay away from others. This theory answers all the questions you may have about your thinking, your relationships and everything in between. The family systems theory relates to the translation and interdependence of family members’ emotional states onto other members of the family, which means that a family is a unit and a single member cannot be studied independently without the other members being considered. 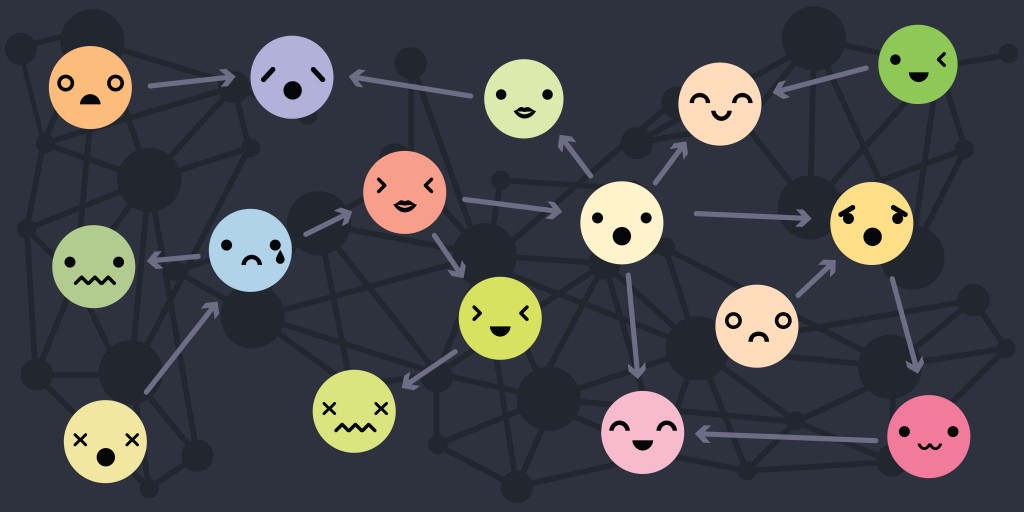 Dr. Bowen, who first proposed this theory, states that interdependence and connection among a family is a very deep-rooted trait, one that can be traced back to cavemen. While we were hunters and gatherers, we formed this connection due to the common needs of food and shelter.

This means that the feelings of every single person create ripples that affect the whole family as a unit. This holds true even when you think you don’t have a great relationship with some members.

Simply put, a child in a loving and caring family progresses and a child is an abused or dysfunctional household might experience setbacks in his/her growth. Even though the interdependence varies for each unit, families have a profound effect on individuals, all of which shapes an individual’s behavior. 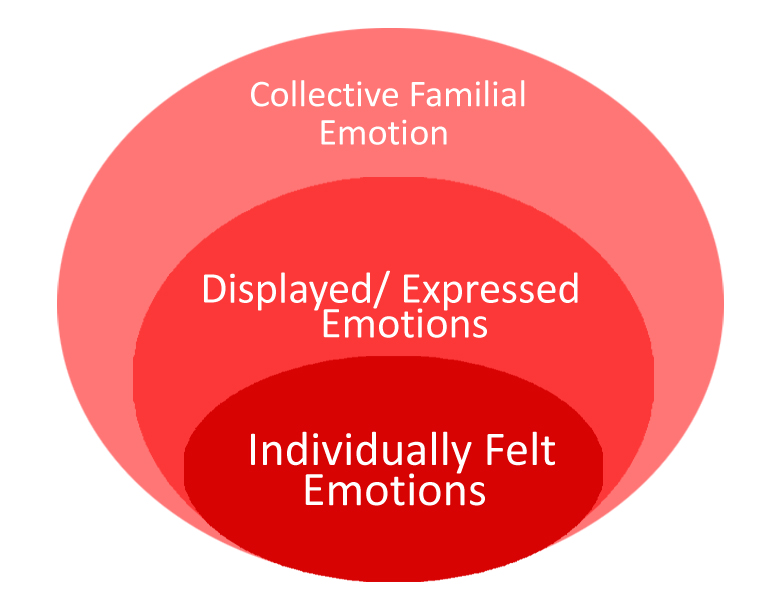 Aim of the Family Systems theory

Dr. Murray Bowen formulated this theory and its eight interlockings with the intention of helping people heal therapeutically with active support from their families. Emotions are involved in almost all aspects of human interactions and these emotions are more or less influenced by family; therefore, it is the family’s impact that helps heal the most. There are basically 8 different types of interdependence that can describe the emotional bonds of a family. 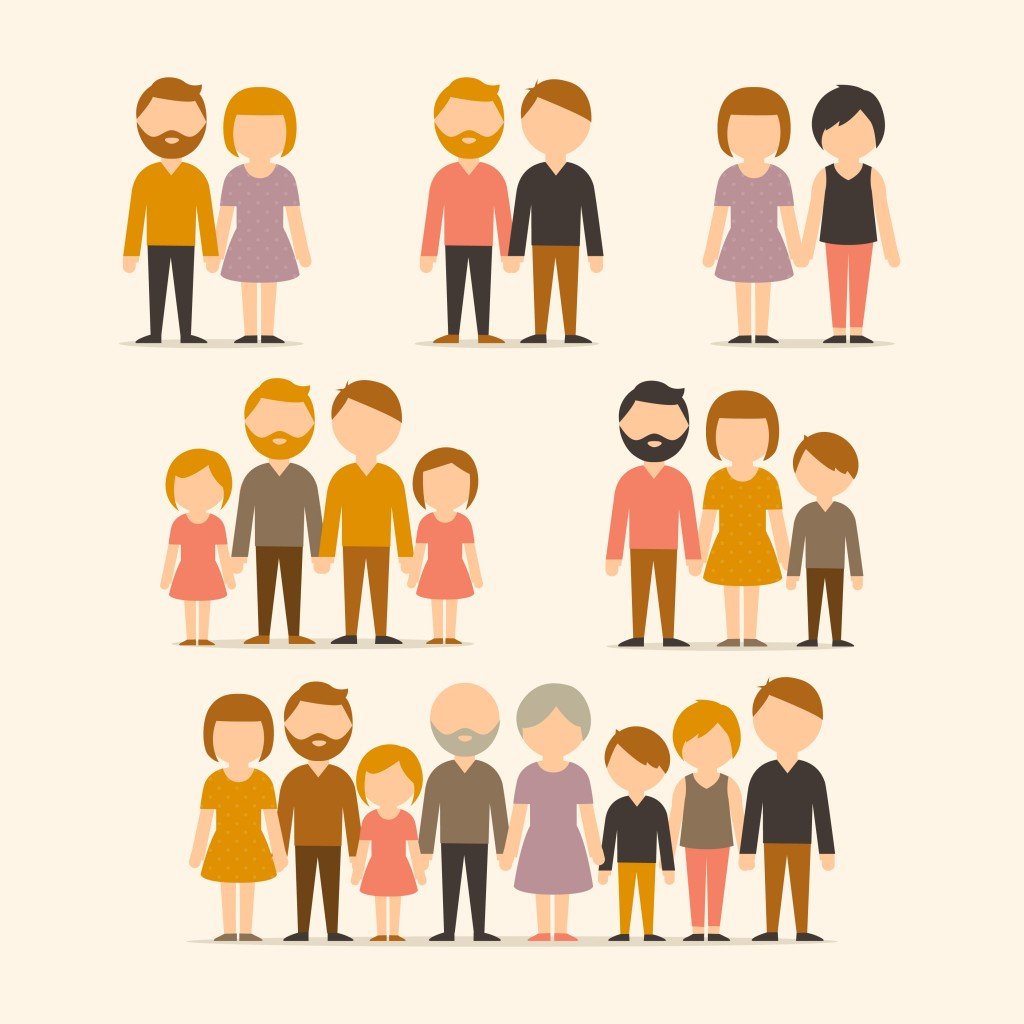 This type of relationship is precariously balanced one. Although better than an unstable two-person relationship, this system is also known to experience friction every now and then. Consider a group of three friends as a triangle 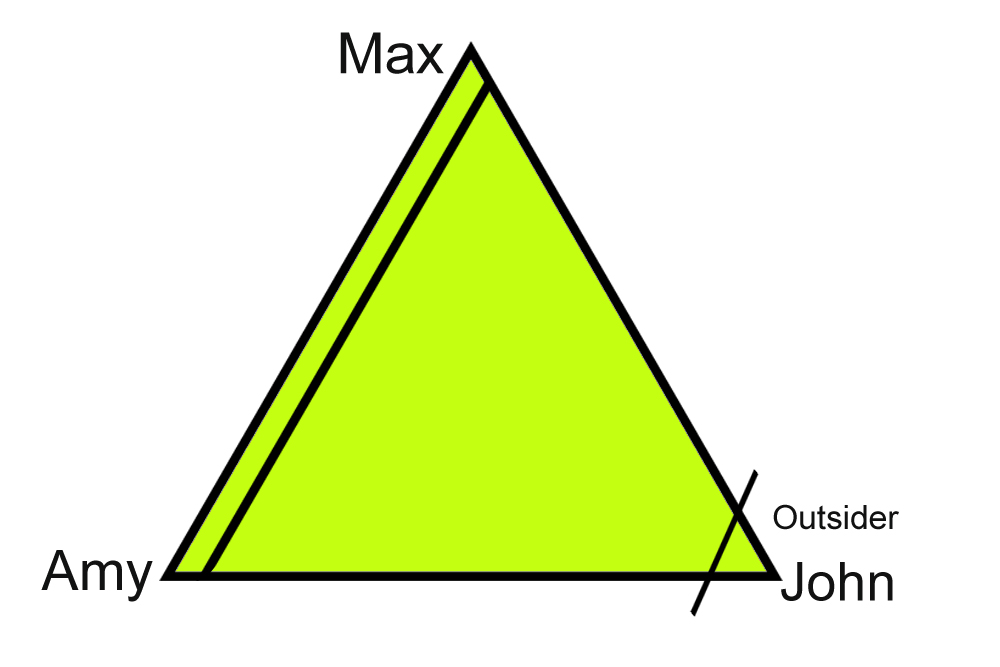 Max and Amy are closer to each other. John feels like an outsider at times, but in the case of conflicts, Amy often sides with John for support, thus making Max the outsider. Here, the tension of the relationship is shifted to Max and Amy’s relationship in the case of conflicts. This tension shifts to John and Max’s relation if there is a conflict between them. At any given time, there are 2 relationships that balance the third conflicting one. This way, in a triangle, the side having tension continuously shifts among the 3 sides, thereby maintaining the overall balance.

Every person in a family is unique. In spite of being a part of the same unit, people develop their personalities differently based on their own perceptions. The manner and the depth of an individual’s development define how different they are from the collective thinking of the family.

A person who has developed a strong sense of ‘self’ is not likely to give up on their thoughts under the influence of a group. She/he would be calm and level-headed in the face of conflicts or criticisms. Such a person can clearly understand his/her dependence on the family but is also confident enough to take a stand when necessary.

A person with a less developed sense of ‘self’ often has a higher regard for what the crowd thinks and therefore may try to please others. They are prone to be self-conscious and under-confident. Differentiation of self relates more to an individual’s ability to maintain his/her own originality without succumbing to outside pressures.

The more interdependent a family is, the weaker the sense of ‘self’ that is present in the members. This also means that issues of a single person affect the whole family’s stress levels.

Development of a sense of self (Photo Credit : NoDenmand/ Shutterstock)

As the name suggests, this system is defined especially for nuclear families. A nuclear family includes single-parent as well as step-parent dynamics. This process is governed by four relationship aspects.

When partners face conflicts outside the family, they tend to vent their frustrations on each other, which causes stress and anxiety.

When a child develops some bad habit, parents often chide them, but if parents worry excessively and obsessively about one child, there are serious conflicts, causing the self-esteem and confidence of the child under pressure to crumble. Oftentimes, the child may become a target for parents to vent their own frustrations on, which further complicates the situation.

When a family is suffering from a crisis, members sometimes try to handle their anxieties by distancing themselves from some member of the family, which creates voids. The distance gradually increases if matters are not sorted out at the onset and may change the family dynamic permanently.

People sometimes get away from their partners or parents in order to remove ‘toxicity’ of their life, without taking the effort to talk to the respective members which cause emotional stress to all the parties involved.

Parents may have emotional and mental stresses, which they often transmit to their children in some way. This process follows 3 steps:

Here, the primary task of scanning, diagnosing and treatment is all done by the parent due to their own fear of the issue. The child may not even have any problem, but the constant fear of parents treating the child in a certain way and he/she reacting in a certain way could confirm the alleged suspicion.

If a parent thinks that a child lacks a certain quality that they deem essential, they may go out of their way to instill this quality, which breaks the natural process and makes the child severely dependent on parental guidance and encouragement. This ultimately leads to a child that has a lower developed sense of ‘self’. 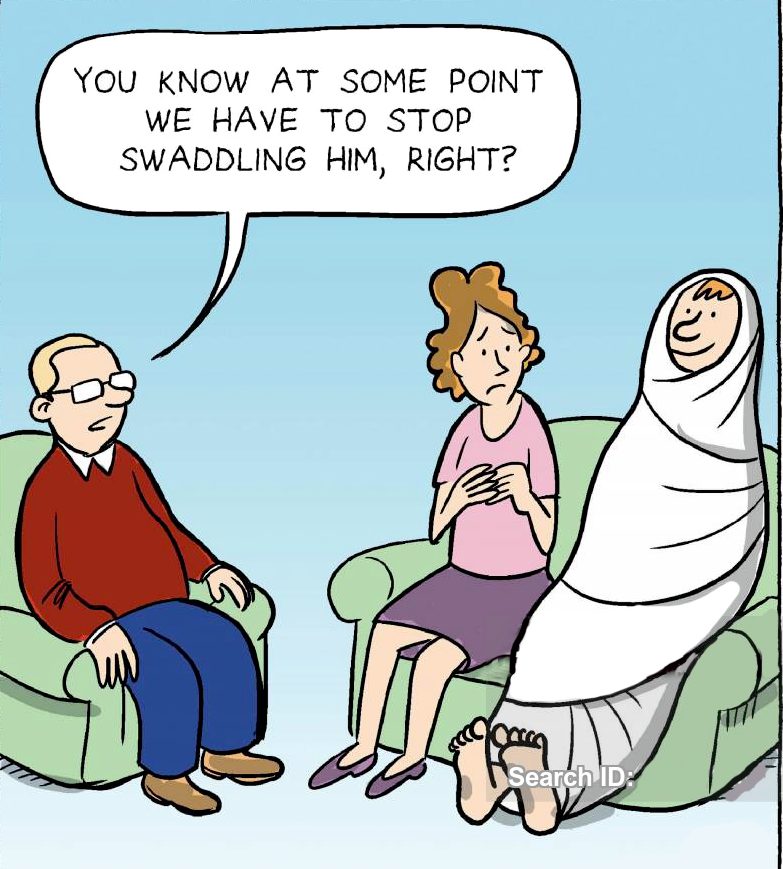 The involvement of parents in a child’s life, the response of the child to the parent’s effort, and the conscious teaching of values by parents to their children tend to significantly affect a child’s ‘differentiation of self’. The development of ‘self’ of a child is similar to that of his/her parents, but there are slight variations.

When the member marries, a person with a different sense of ‘self’ may enter the family, and hence the offspring will be under the influence of two individuals. This will continue transitioning as the family grows, so there is a larger difference in the ‘differentiation of self’ as generations progress.

For example, if a child sees that his/her grandparents are held in contempt by their parents, the child may perceive this as normal. To a child, this would be the ideal way to treat parents, so he/she may develop a sense of ‘self’ that aligns with their parents’ behavioral patterns and values. This behavior may span multiple generations!

The difference in the ‘differentiation of self’ affects various aspects of an individual, including health, education, marriage, and occupation. 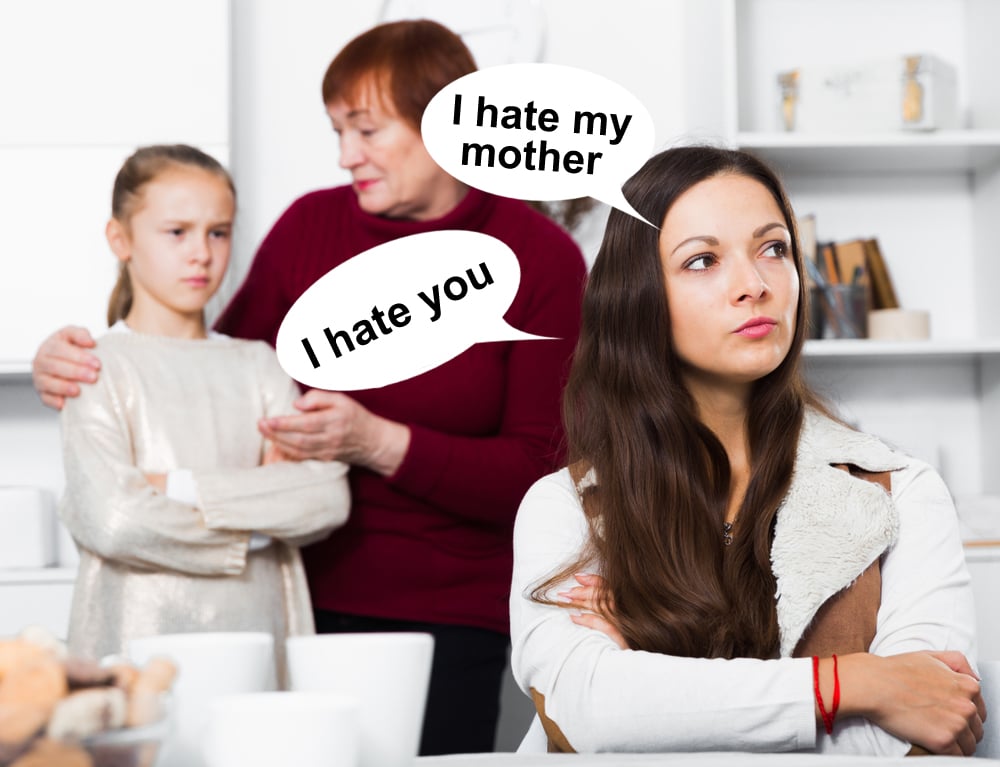 Where there is a family, there are bound to be problems for various reasons that can put an emotional or mental strain on a person. To relieve this stress, people sometimes choose to cut off emotionally from the family or distance themselves from some of the members. People may move out of the house or begin a life in a distant place to be away from the pressure. Whenever the member visits the family, old memories and issues resurface, which cause undercurrents that drive members of the family to grow tired.

Also, a person who has distanced themselves emotionally from the family may burden other relationships in order to satisfy the emotional void. Such a person tries to form a family-like bond with other people who may or may not reciprocate those sentiments. Additionally, there is extra pressure on his/her other relationships to make him/her feel complete.

This theory was originally based on the research of psychologist Walter Toman, which was incorporated by Bowen in his ‘family systems theory’.

According to this theory, the position of the siblings also plays a major role in the development of their’ self’. The oldest sibling is more likely to be in the leadership position, while the youngest one is often the ‘follower’. The middle one has characteristics of both, to some extent. There are also cases wherein the roles are reversed due to a different development of ‘self’.

This position also affects other aspects of individuals, like their choices regarding marriage. The oldest sibling of a family married to the youngest one of another family will often work in harmony because they are two individuals who have had complementary roles in their respective families.

Similarly, if two spouses are the oldest in their respective families, there are chances of conflict, because both of them were leaders in their previous roles and therefore try to assume the same role in their married life, which may often lead to conflicts and differences. 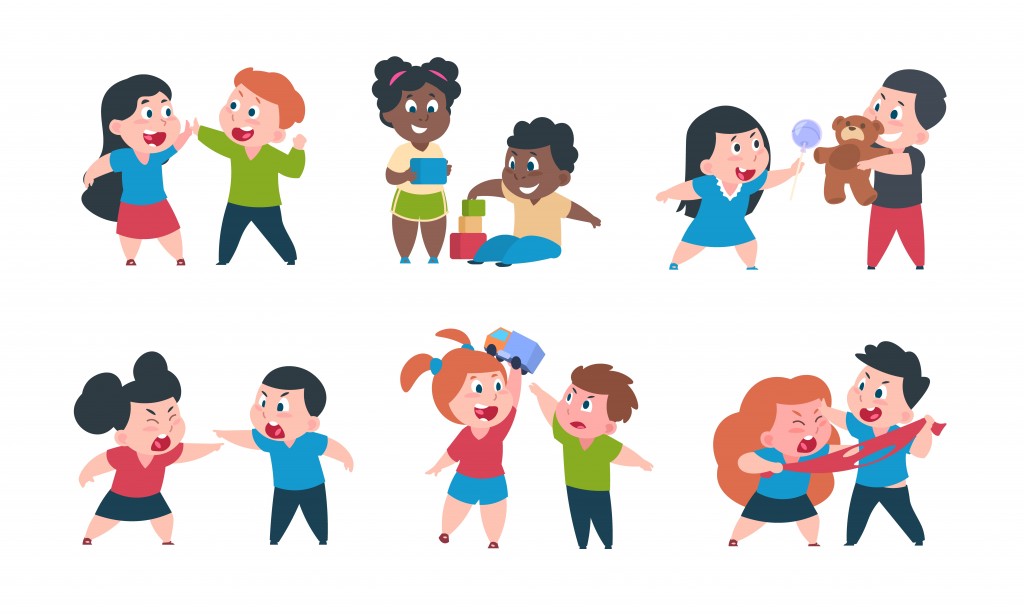 The Bowen theory does not limit the development of an individual to the family alone; there are also cultural and societal influences that affect families, and the reaction of families to such changes shapes entire generations. While there are anxiety and tension in society as a whole, parents try to monitor children, but give in to their demands to relieve the temporary stress.

These children then learn to identify that their parents are in an uncertain position and become more and more rebellious, which leads to an increase in crime rates, violence, divorce rates, etc. Such a situation leads to a period of regression for society as a whole. Conversely, when principled disciplinary action is taken by parents, there are periods of progression. Parents with a lesser developed sense of ‘self’ are more prone to let their kids get away with acting out without correcting them.

Family systems theory helps individuals understand themselves while resolving their conflicts and gaining better emotional interdependence. The whole family comes together to support a member. This theory is being used by physiologists all over the world to help people suffering from emotional setbacks.