The crackling sound is caused by the release of elastic potential energy when the wrapper buckles from one stable configuration to another.

Imagine sitting in the last row of your classroom, listening to a boring lecture. Out of the blue, your best friend pulls out a shiny bag of chips and passes it over. You try opening it quietly, with the utmost care, and then bam! You look up, and the teacher is already staring you down.

We’ve all been there. We’ve all tried unwrapping a candy bar or a bag of chips in a silent classroom or a movie theatre, and have invariably ended up embarrassing ourselves. But have you ever wondered what makes plastic packaging so loud? 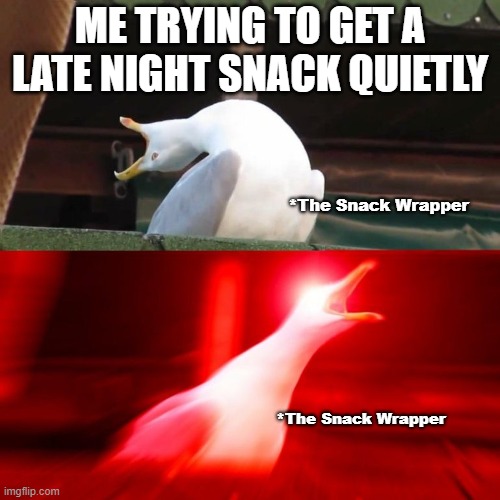 Most plastic packaging, from candy wrappers to grocery bags, are made of polymers like polyethylene, mylar, or cellophane. Thin sheets of these polymers make great packages, but at the same time, are excessively loud. 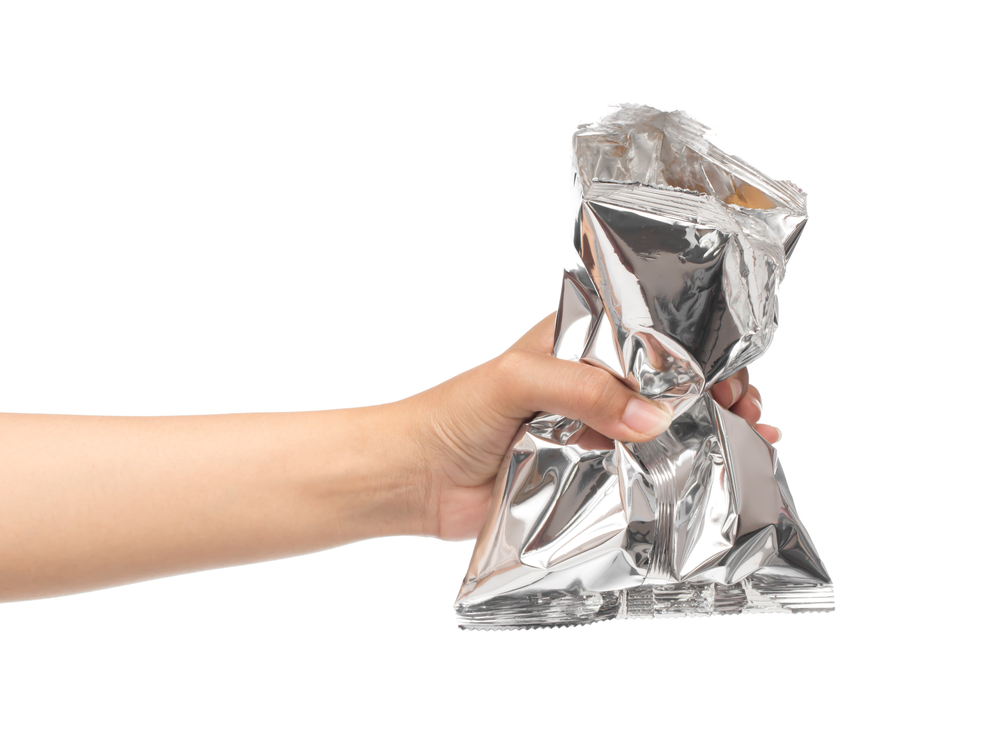 I bet you can hear this picture! (Photo Credit : Yellow Cat/Shutterstock)

Plastic sheets are thin, yet strong. You can neither stretch them out like rubber, nor can you break them by bending. Try deforming a flat plastic sheet, and you will end up with a crinkled, creasy mass.

These ubiquitous creases are the culprits behind the crackling sound of plastic wrappers. To understand how this happens, let’s take a look at their elastic properties.

Most of us are familiar with elastic and plastic bodies, but a quick refresher may be helpful.

A body can be deformed by applying force to it. When the force is removed, if the body bounces back into its initial state, it is elastic. On the other hand, if the body does not return to its original configuration, we call it plastic.

Whenever we deform a body, we impart some energy to it, which gets stored as its elastic potential energy. When the body changes back to its stable state, this energy is released as either kinetic energy, heat, sound, or some other form of energy.

For example, consider a bow and arrow. When you pull the bow, you are deforming the body and thereby storing some elastic potential energy in it. When you release the bow, this energy gets converted into kinetic energy, which helps to shoot the arrow, and the bow returns to its initial state.

A similar type of energy conversion happens in a crumpled sheet.

The Structure of a Crumpled Plastic Sheet

Have you ever noticed what the ‘stable configuration’ of a plastic sheet is? It rests flat. That’s it. A flat sheet with hardly any deformations produces little to no noise when you handle it. If you place it somewhere, it will simply lie flat.

However, once you crumple a sheet of plastic, something interesting happens. Criss-cross lines or creases start appearing on the sheet and it no longer falls flat. 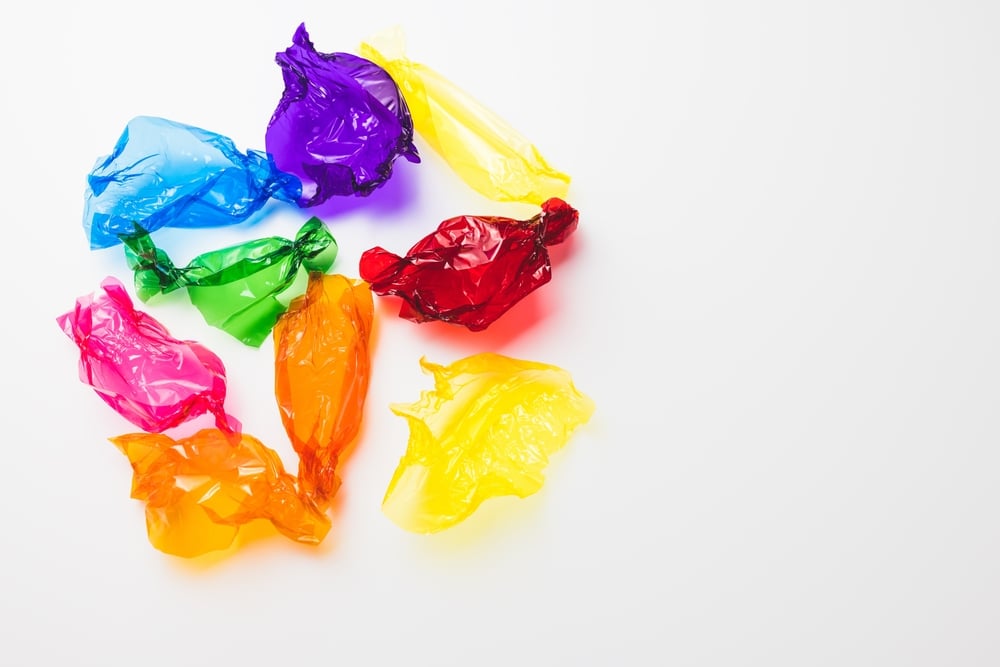 Each stable state of the crunched sheet has a particular elastic potential energy. Therefore, when we manipulate a creased wrapper in our hands, we are directly influencing its energy.

The Science Behind the Crunching Sound

According to studies, it has been observed that the crackling sound of crumpled sheets occurs as discrete ‘clicks’. The crackle is not continuous, but rather a series of bursts of varying intensities.

Let’s try to better understand what causes this. 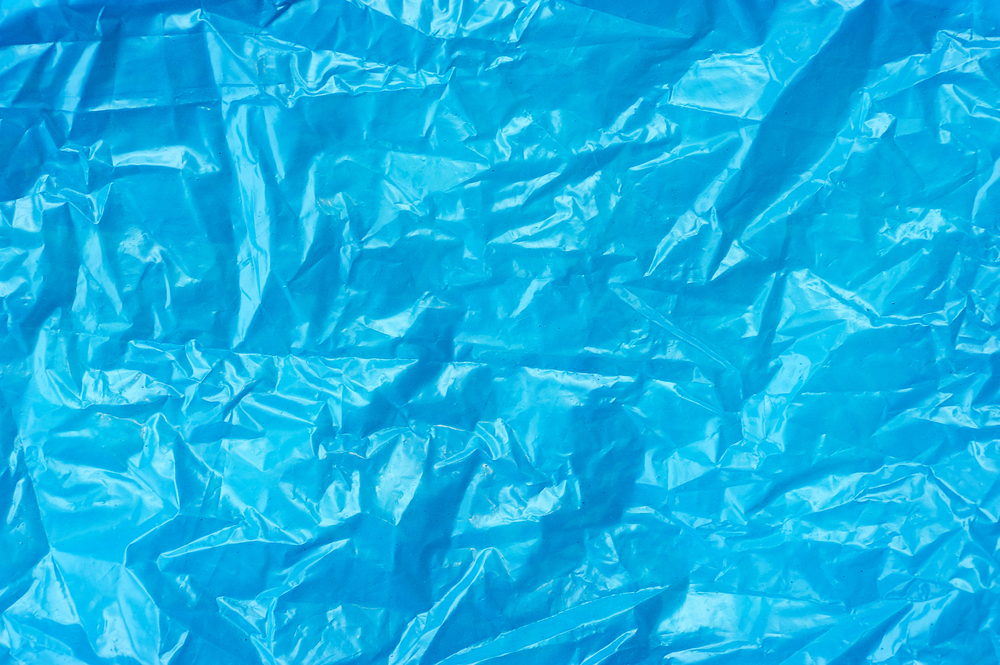 A crumpled sheet (e.g., a candy wrapper) remains in one of its stable states, with a certain elastic potential energy, until we deform it. When we twist or bend the sheet; the work we do is stored as potential energy.

However, there is a limit to the amount of energy that one configuration can hold. When the energy exceeds that limit, the sheet simply snaps into another configuration and releases some energy in the process, which we hear as the ‘click’.

The intensity of this sound depends on the configuration. When bigger creases snap, they produce a louder sound, whereas the buckling of smaller snaps sends out fainter bursts of noise. 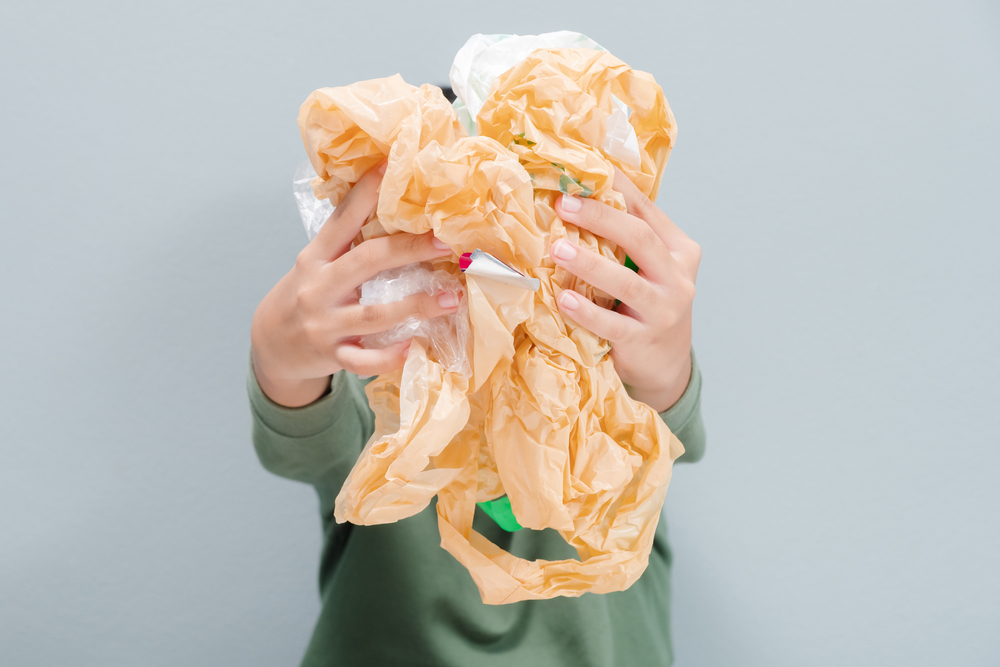 In short, when we ‘unwrap’ something, we are moving the plastic package through a number of configurations in a short time. As a result, we hear a sequence of multiple clicks, which we define as the ‘crinkling sound’.

According to physicists, deforming a plastic sheet is like pushing a rock down hilly terrain with lots of ridges.

Imagine a hill with lots of valleys and ridges, and imagine pushing a rock up the hill. Once you reach the summit, the only outcome is that the rock rolls back downhill. When it rolls down, it gets stuck in one of the ridges down the hill. If you repeat the process, the rock may end up getting caught in another ridge.

Here, the ridged hill resembles the diverse configurations of the sheet. Pushing the rock up is similar to building up elastic energy. When you distort the sheet, the elastic energy builds up until it reaches a limit. Once that happens, energy is released and the sheet buckles into a random configuration, just as the released rock stops after getting stuck in one of many ridges on the hillside.

Thus, the crunching sound of plastic packaging is caused when the creased plastic sheet buckles from one conformation to another.

Now you know why you can’t seem to get rid of that annoying sound, no matter how slow you unwrap the sheet. By slowing down, you’re not dodging the click, just making it less frequent.

As physicist Eric Kramer has said, “You can follow that sequence as slowly as you want, but each step in the sequence is accompanied by a click. And there’s nothing you can do about it.”

Whether you unwrap something fast or slow, the only way to get to your candy is by dealing with that irritating crackle.