Sand is made of rocks eroded by rivers, the skeletons and shells of invertebrates, as well as calcium carbonate from parrotfish poop!

No one pays attention to sand. Sure, we go to the beach and use the sand to make castles, and or as a backdrop to fuel our Instagram with summer time scenes, but how often do we really think about it? From far away, sand looks like nothing more than a golden expanse of land meeting the sea.

However, if you take out a microscope and look through its lens to peer at the sand, a whole new world emerges.

The simple question of ‘what is sand made of?’ is actually quite fascinating… the answers involving time travel, fish poop, and pink skeletons!

Sand is made from eroded rock

A lot of the sand (both beach and desert) is made from eroded rock.

As rivers flow downstream from their origin, their movement (often violent) erodes rocks down to very small grains of minerals and carries these small portions of rock along with it as it travels. Along the river’s journey, the pebbles continue to break down into smaller pebbles, which finally become sand by the time the river reaches its end.

As the river empties into the ocean, it deposits some sand along the land. The waves constantly shift the sand deposited by the river, creating the gorgeous coastlines we lounge on during summer vacations. Smaller sediments are carried even further into the sea.

Sand will look slightly different in different parts of the world, depending on which types of rocks the river eroded.

Brown and golden sand is usually made of feldspar, which is a brown- to tan-colored mineral, as well as quartz, which contains iron oxide, giving it a golden-brown hue. Darker black sand is caused by basalt, which is formed from volcanic action. This sand is usually found in the ocean crust or where there is significant volcanic action, such as the islands of Hawaii.

The picture below shows sand from Hawaii under a microscope. The green-tinted pebbles are a mineral called Olivine, a mineral that comes from volcanic basaltic rocks. The black flecks in the picture are basalt. Hawaii has many active volcanoes, which explains why this type of sand is found there. 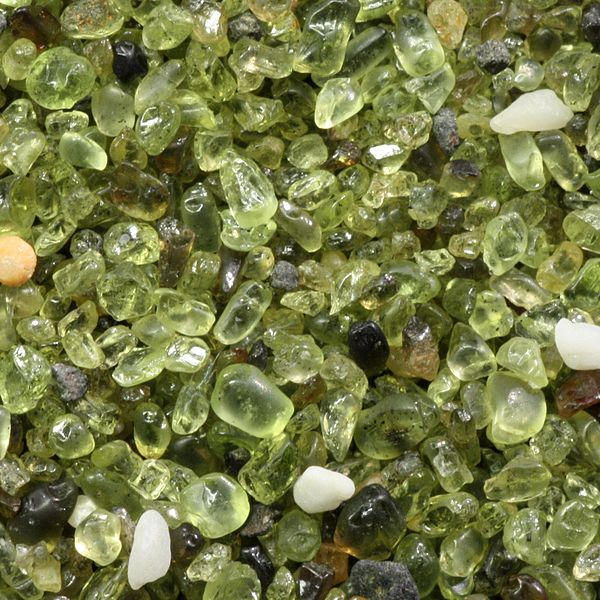 This is sand from Hawaii under a microscope. The green-tinted pebbles are a mineral called Olivine, a mineral that comes from volcanic basaltic rocks. The black flecks in the picture are basalt. Hawaii has many active volcanoes, which explains why these types of sand are found there. (Photo Credit : Siim Sepp/Wikimedia Commons)

The size of the sand grains is determined by how weathered the grains are. Fine sand grains mean that they have been weathered for more time by the water.

Studying the minerals in sand can tell geologists a lot about the landmass and how it might have come to be formed. For example, by studying the basalt-rich sand of Hawaii, scientists can study the island’s origins, and determine when and how it must have formed.

Desert sand, interestingly, also comes from sand near beaches. When waves hit the coast at an angle, they drag the beach sand and move it along, which elongates coastlines. However, wind sometimes blows the sand inland, which can create dunes.

Sand is made from the skeletons and shells of marine life

Life forms also contribute to sand. In fact, sand is made up of the skeletons of many invertebrates, such as clams, coral and other creatures with shells that live in the sea. These are the same shells we see, love and collect when we go to the beach.

The waves carry them to the shore, where they settle. They too slowly erode to become finer grains of sand.

The pink beaches of Bermuda

There are a few other organisms that contribute to sand around the world. Foraminifera, for example, are responsible for the pink beaches in Bermuda. Foraminifera (as they are colloquially called) are single-celled shelled protists that live in the ocean. A certain red-colored species of foraminifera gives Bermuda’s sands a pink hue. 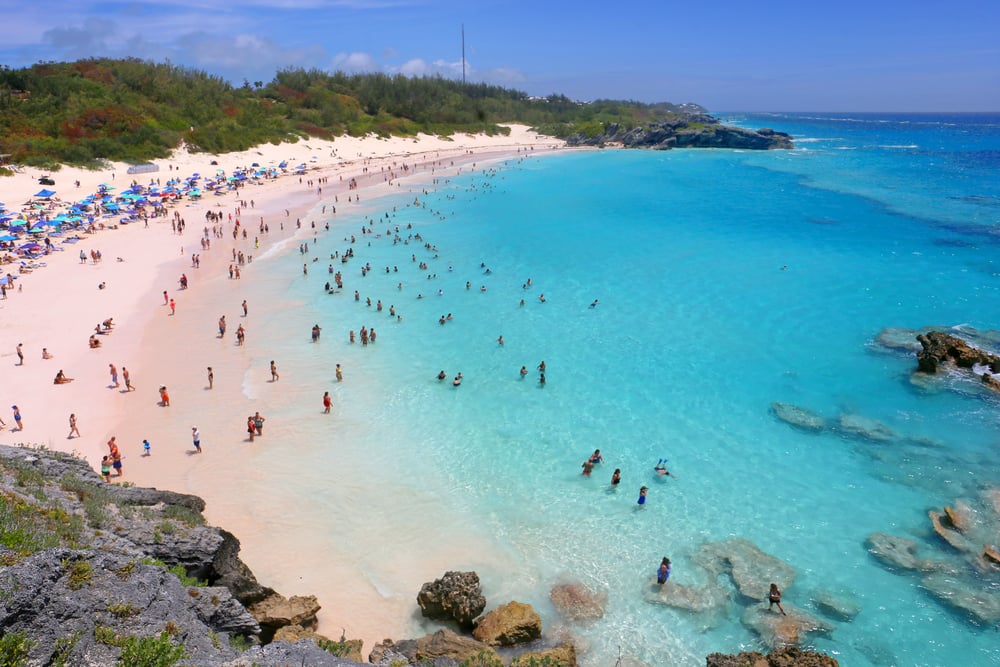 These red foraminifera grow near the coral reefs in Bermuda. When they die, their red-shelled skeletons get carried to the shore, where they mix with the white sand to create uniquely picturesque pink sands.

Sand is made from Parrotfish poop

Sand is also made from poop. Yes, you heard that right… and more specifically, the poop of parrotfish.

Parrotfish are like the cows of the seas. These colorful tropical fish spend almost 90% of their time eating coral, or rather, the algae that grows on the coral. They use their hard beak-like mouth to scrape out and eat chunks of coral for their daily meals. 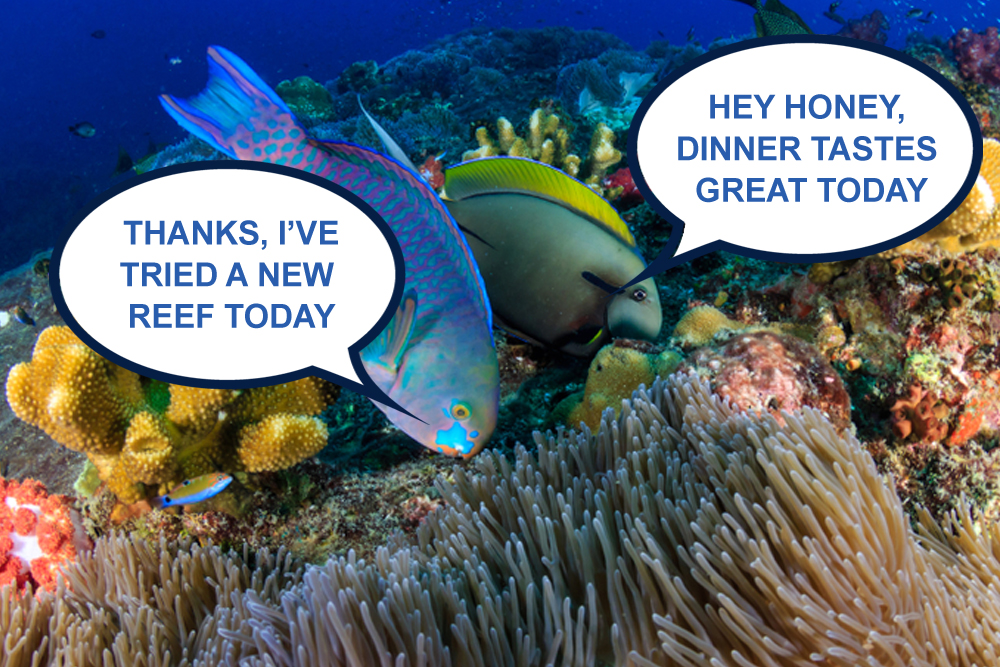 The parrotfish poops out so much of this that it goes on to form entire beaches! One large parrotfish can produce as much as 450 kg (1,000 pounds) of calcium carbonate sand in a single year. The mesmerizing white tropical beaches of Hawaii, the Maldives and the Caribbean are primarily formed from parrotfish poop.

Sand is made of organic matter

Beach sand is also replete with living life. Though you can’t see it, sand contains a rich micro-ecosystem that is important for the health of large ecosystems and other interdependent ecosystems.

Algae are very common inhabitants of sand. These algae can photosynthesize and produce a variety of molecules (not to forget oxygen from photosynthesis) that make them a part of a healthy ecosystem. Many marine or coast-dwelling organisms depend on this algae, making them an important part of the food web.

Glass beach, California is made from garbage

Human waste can also form beaches. In 1949, the State of California began using the area that is now Glass Beach as a dumping ground for all sorts of garbage, from vehicles and food to pots and glass. Eventually, after almost 20 years, the authorities realized that dumping garbage there wasn’t the best plan and shut the area down.

Gradually, several clean-up initiatives began work on the beach. Toxic waste was removed and biodegradable material was degraded. The water did its job of eroding the tiny pieces of glass and clay from pots by rounding them off and giving the beach a multicolored effect. 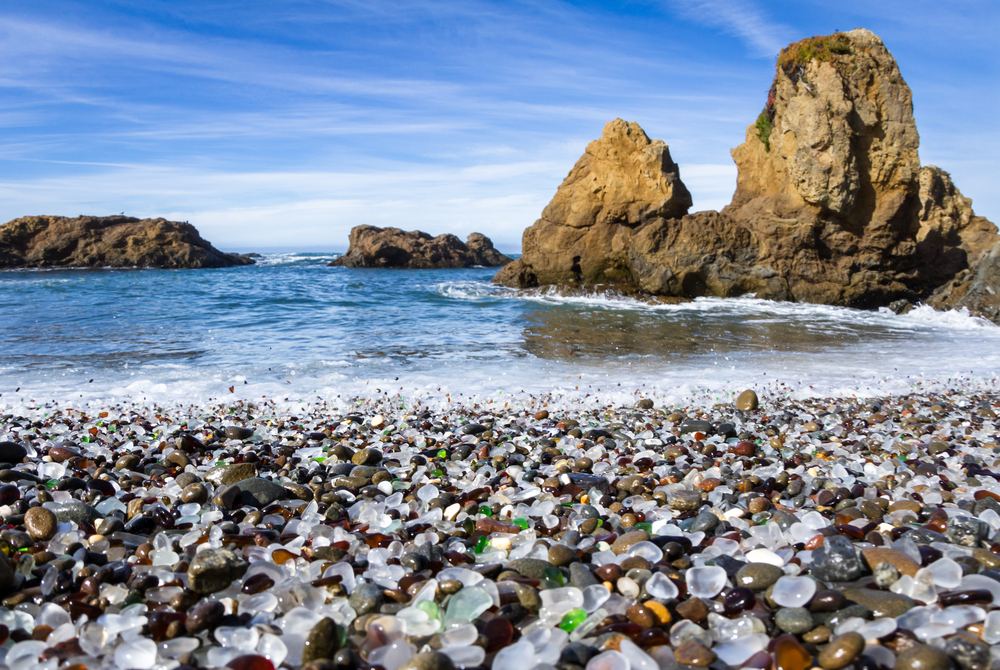 In short, sand isn’t just here to make sand castles or sun bathe… it also opens up new ways for us to see the world—and our place within it!