Single-cell proteins, derived from single-cell microbes, are more nutritious than conventionally consumed proteins. If used judiciously, they have the potential to mitigate global protein deficiency.

Although the increasing world population is worrying, the real problem is the nutrition deficiency that accompanies such a population increase. Protein deficiency is a serious issue, one that leads to a loss of muscle mass, increased infections, dehydration and stunted (impaired) growth.

A major way to mitigate this is to support unconventional and alternative protein-rich sources. Microbes like bacteria, fungi, yeast and algae comprise over 40% of crude protein in their dry weight and can act as a wonderful protein source.

The idea of using microbes for nutrition is not new. We have a long history of consuming fermented foods (which contain bacteria and yeast), curd and yoghurt (bacteria), mushrooms (fungi), and gelatin (algae). Two fingers, a young man and an old man. The old man asks the young man if he is getting enough protein. (Photo Credit : Yeexin Richelle/Shutterstock)

What are single-cell proteins (SCP)?

Single-cell proteins are proteins derived from single-cell organisms, like bacteria, fungi and algae. The term is specifically applied to the large-scale production of single-cell microbes for isolating proteins suitable for animal and human consumption.

This doesn’t mean that the single-cell organisms have only proteins. They also have carbohydrates, fats, vitamins and other vital elements. SCP composition depends on the substrate composition (food for the microbe) on which they were grown.

Even though we have been unknowingly consuming them since ancient times, they were renamed as “single-cell proteins” in 1966 by Carol L. Wilson.

Severe food shortages during the time of global conflict led to the first mass production (large-scale production) of SCP. During World War I, Saccharomyces cerevisiae (a yeast conventionally used for wine-making, brewing and baking) was used, whereas during World War II, Candida utilis (a yeast used as an additive and flavoring agent) was utilized for protein production.

How are single-cell proteins produced?

Characteristics of microbes used as SCP

Microbes like bacteria, fungi and algae used for SCP production should have characteristics like rapid growth, increased biomass (dry weight of the organism) and tolerance to high temperatures, pH and other stress that is commonly encountered during SCP production.

Characteristics of an ideal SCP

For example, algae (such as spirulina) produced as food and nutritional supplements have at least 60-70% protein and only 3-8% nucleic acid.

SCP produced from fungi (e.g., yeast) provide larger amounts of vitamin B complex, making them highly nutritious. Bacterial SCP (for example, Lactobacilli and Methylophillus) generally have a higher content of essential amino acids like methionine (up to 3%).

In addition, they must be acceptable to the public for consumption in terms of taste, odor and texture. Microbes used for SCP production are shown. The first image is a yeast, Saccharomyces cerevisiae, commonly known as Baker’s yeast or Brewer’s yeast; the second image is Chlorella, algae; the third is an Aspergillus, fungus and the last picture is Lactobacilli, a bacteria.

How are SCP produced?

Substrates are a medium in or on which microbes can grow. The substrate provides the right nutrition, as well as the best growing environment for the particular microbe. A substrate determines how well the microbes grow and produce proteins, and by extension, how expensive the set-up for the operation will be.

As the substrates make up 45-75% of the total production cost, the use of industrial and agricultural wastes for these microbes is cost-effective. Generally, the materials used as substrates are organic and compostable waste (such as agricultural and food waste) and can minimize production cost. Non-conventional substrates like plant biomass, natural gas, methanol, ethanol, and petroleum byproducts can also be used. 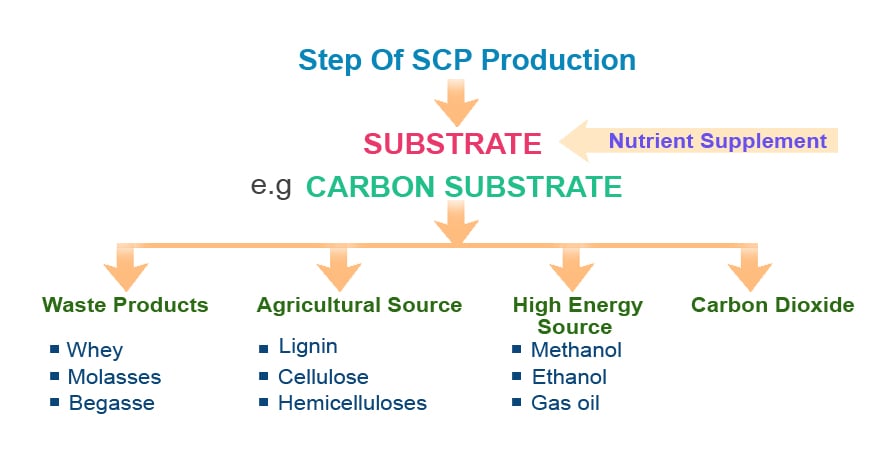 The main types of substrates used for SCP production are wastes, agricultural products as well as petroleum byproducts.

The general steps for SCP production begin with the selection of a microbe and its substrate. The microbes are allowed to grow on the substrate (agricultural, industrial and other wastes) and cells are then separated from the growth medium by a process called harvesting.

After the harvesting process, components other than proteins, like the cell wall (if present), are removed. The nucleic acids are degraded and the remainder is filtered to get the crude protein, which is then treated to remove any other contaminants.

The remainder is dried and processed further to make it suitable for consumption. 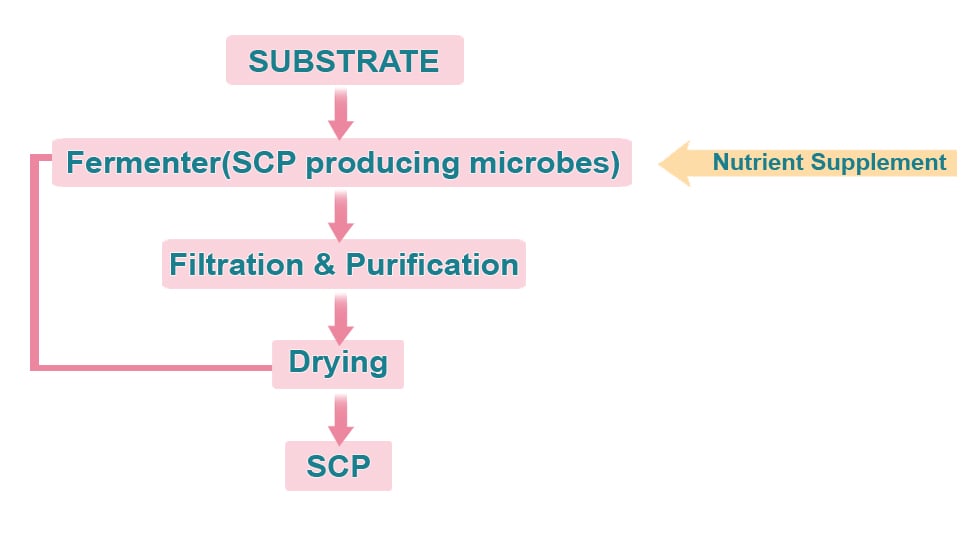 The clear answer is yes. Proteins produced in this way have considerable advantages over conventional proteins.

Microbes have a short doubling time (the time required for the microbes to double in size), facilitating rapid protein production. Compared to cultivating plants, they require less land, and seasonal changes in the weather do not influence them, thus enabling year-round production.

The protein to carbohydrate ratio of SCP is higher than traditional proteins, with a good balance of essential amino acids and vitamins, making them more nutritious.

The most important advantage is the fact that microbes can use several types of raw materials (agricultural waste and industrial wastes) for growth. This means that microbes can feed on the waste, get rid of them, recycle them to produce proteins and protect us from pollution—all at the same time!

This is why SCP could be the biggest hope to answer the protein deficiency problem at a global level.

What are its limitations?

The major problem with SCP production is the capital costs required for the raw material and purchase of highly sophisticated instruments, thus influencing their economical viability.

The problem with using bacteria for SCP production is the higher concentration (6-10%) of nucleic acids in the final product, which is undesirable. This may lead to kidney stones upon prolonged consumption.

If algae or yeast are used, the SCP has cell wall components that cannot be digested and may cause allergic reactions. Using algae for SCP production results in strange colors and flavors, making it difficult to consume.

Single-cell proteins are a promising nutrient supplement for animals and humans and offer numerous benefits over the conventional plant- and animal-based proteins. If certain limitations are improved and public awareness about the advantages of SCP is increased, it can eradicate or at least reduce global nutrient deficiency. 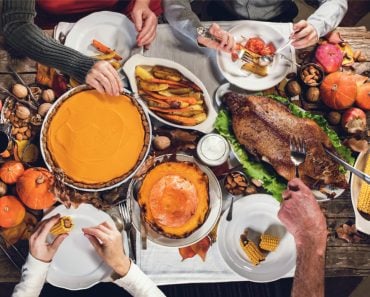