Gut bacteria are those bacteria that live inside the digestive system of all animals, including humans. We’ve found that these bacteria are crucial to our health, both in physical and mental respects. They help us digest food, provide us with nutrients, and help us fend off pathogenic bacteria.

Gut bacteria, also known as the gut microbiota, are the bacteria present in our bodies that line the inner walls of our gastrointestinal tract. There are about 300-500 bacterial species in the human gut, with their average population being roughly 100 trillion. That’s enough to fill twelve thousand, six hundred and fifty-eight Earths with our current population. Initially, that was thought to be ten times the number of human cells in our body, but new research suggests that the ratio of bacterial cells to human cells could be 1.3:1.

You may hear a lot about gut bacteria in the news, social media, and many science channels, but we’ve only recently started to understand the critical role they play in our bodies.

Where does it all begin?

When babies are still in the fetus stage, inside the mother’s uterus, bacteria start to colonize and form settlements in their gut. These bacteria are similar to the mother’s and they enter the body when the baby swallows amniotic fluid. Once settled inside, the gut bacteria start planning their settlements, but only start to build them after the baby is born.

After the baby is born, more bacteria enter the gut, especially at birth. During the delivery, the bacteria present in the mother’s vagina make their way inside the baby’s mouth and try to colonize themselves inside. In fact, C-section babies have a different gut microbiota as compared to their naturally born counterparts.

Unfortunately, all the bacteria that enters the baby’s gut isn’t good. Sometimes, bad disease-causing bacteria can enter. However, there is a simple solution – breastmilk! A mother’s breastmilk contains everything a baby needs to grow big and strong.

One breastmilk component is antibodies. When babies are born, their immune system isn’t well developed, so these antibodies protect the newly born babies until their immune systems learn to fight for themselves. One of the ways they do that is by teaming up with the good bacteria to fight the bad bacteria and prevent them from lining the interior of the baby’s gut.

Additionally, breastmilk has human milk oligosaccharides, which are sugary molecules meant to boost good gut bacterial growth. It’s a natural prebiotic that helps increase the population of Bifidobacterium – the bacteria primarily present in a baby’s gut.

As the baby grows older and starts eating solid foods, the gut bacteria start to party. All these new foods bring newer and newer gut bacteria inside the baby’s system, where they can mingle with each other. The new foods also bring new nutrients that support the growth of such different gut bacteria. This is why maintaining a healthy diet is so important. Research shows that eating too much non-nutritious junk food causes imbalances in our gut bacteria.

The new bacterial species that start to make themselves at home are Bacteroides, Ruminococcus and Clostridium. Around the time babies turn three, their guts settle down and become more adult-like.

Why is this procedure so delicate and important? Because gut bacteria have enzymes that help break down difficult to digest food and help make vitamins that our bodies are incapable of producing! Without gut bacteria, our body would face vitamin deficiencies and suffer from indigestion and growth defects. 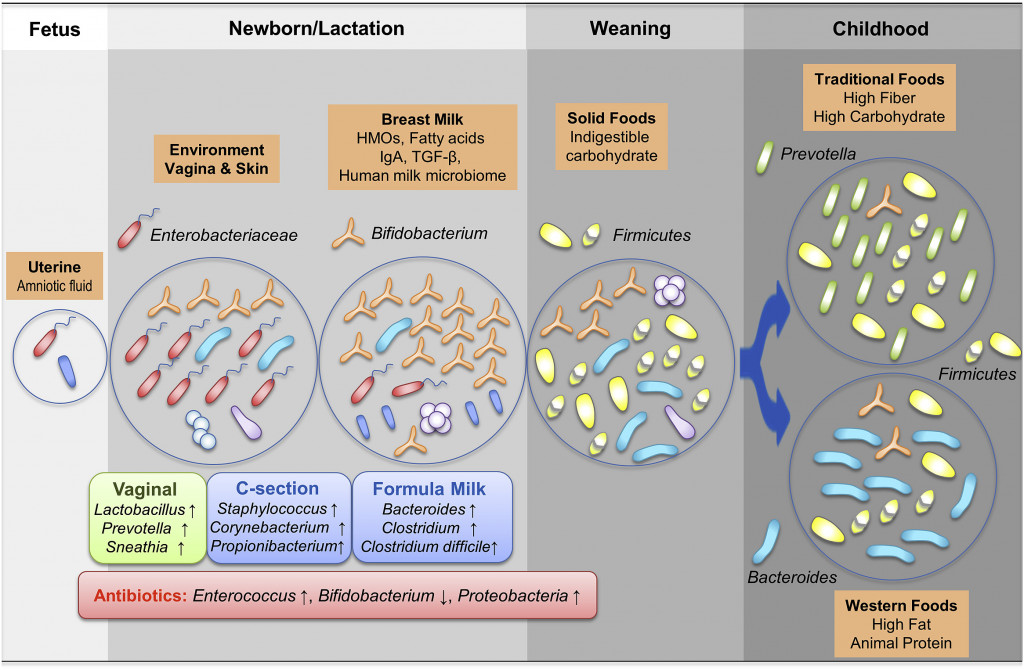 What other processes do gut bacteria participate in?

On average, each person passes 60 tons of food through their GI tract over their lifetime! That’s as heavy as ten elephants or a fully fueled airplane. Our gut bacteria grind non-stop by helping us break down complex sugars like starch and other polysaccharides. In doing so, they make the B group vitamins and vitamin K, which they release into our intestinal environment, where it is absorbed by our own cells. We should thank our gut bacteria, as we need these vitamins for our body to stay healthy.

But how do gut bacteria perform such helpful tasks? They have the genes for it and all these genes make up what we know as the gut microbiome. Interestingly, more than 99% of the genes in our body are microbial.

Some gut bacteria like Corynebacterium, after feeding on the food we eat, produce metabolites like serotonin. This produced serotonin is released into the blood and interacts with the nervous system, which signals the brain to control the sleep/wake cycle.

If you find yourself suffering from poor sleep quality for an unknown reason, it could be that your gut bacteria have been disturbed or imbalanced in some way. 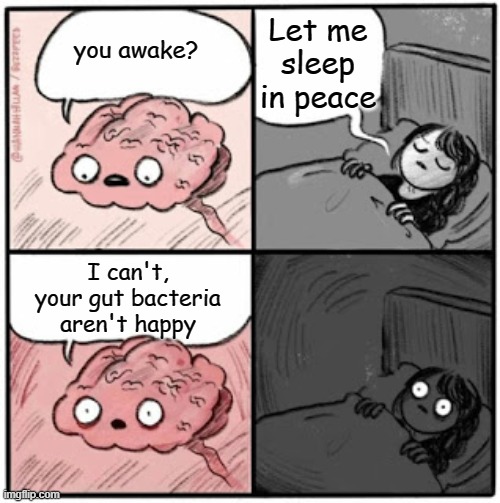 If your gut bacteria can’t sleep well, neither can you.

Apart from helping us digest food and sleep well, the gut microbiota also communicates with the brain. That’s right, all the gut microbes have our brain on speed dial to help coordinate our body’s functions. This is known as the gut-brain axis. It’s the two-way communication stream between the central and enteric nervous systems, allowing the gastrointestinal tract and brain to talk to each other and regulate homeostasis.

Neurons in the GI tract send signals to the brain coordinating physiological functions and even immune responses to germs. That’s how gut bacteria are able to affect the way we behave, think and interact.

One study that worked on special female mice that lacked gut bacteria found that they had lower anxiety levels when they were inside mazes. In males, however, there was a stronger stress response. This led scientists to believe that the gut-brain axis differs between genders.

So, depending on how healthy our gut bacteria are, it can affect our brain signaling, thus affecting our hormonal responses. This is why when you have indigestion or stomach problems, you may also feel a lot of anxiety or irritability.

How can we increase our good gut bacteria’s strength?

Apart from maintaining a healthy diet, we can help strengthen our good gut bacteria using two tools; probiotics and prebiotics.

Probiotics are essentially good bacteria that we put in our bodies in high enough concentrations to actually have a beneficial effect. These include Bifidobacterium species and other Lactic Acid Bacteria species. These bacteria can be consumed by taking capsules or eating probiotic foods like cheese, yogurt and other bacteria-rich foods.

However, before trying any of these two supplemental approaches, it is important to consult your doctor to find out if probiotics or prebiotics are suitable for you. 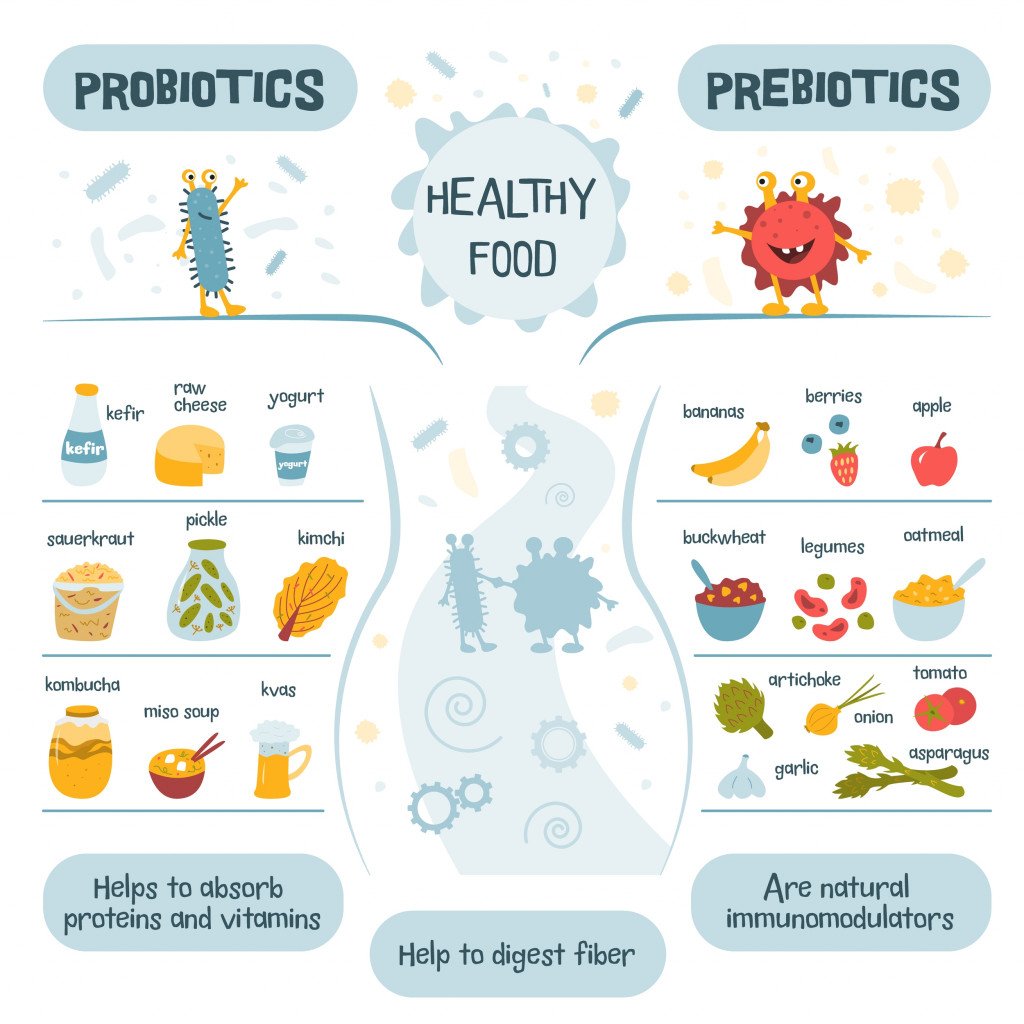 I hope you’re beginning to understand now just how important gut bacteria are to our survival and health. They are far more than germs that help us digest food. They help control our body’s functions in unimaginable ways. Studies continue to find connections between disturbed gut bacteria and neurological conditions, such as Alzheimer’s disease and autism.

That’s why so much research focuses on better understanding the gut-brain connections. Previously, brain disorders were considered incurable, but now there is hope that we can treat these conditions better by modifying gut bacteria.

Many companies can give you details about your gut bacteria based on your stool samples. All you have to do is send them a bag of poop and they will isolate all the bacterial strains from it and sequence them to let you know how healthy your gut is and what kind of bacteria you have inside.

Our gut bacteria do so much for our body that we don’t yet understand. However, it is clear that by optimizing the relationship between our body and our gut bacteria, we can become mentally and physically stronger!