A TV dish antenna is concave in order to better focus and amplify the incoming signal. The curved surface of the dish allows the waves to converge at a single point, which results in a stronger signal.

You’ve likely read the basics about how concave and convex mirrors work in the field of optics. The idea behind the curved, bowl-like shape of dish antennas is much the same: it facilitates the convergence of incident rays.

However, before we talk about it, let’s do a quick recap of how incident rays converge on a concave surface.

Reflection from a concave surface

Take a look at the image below: 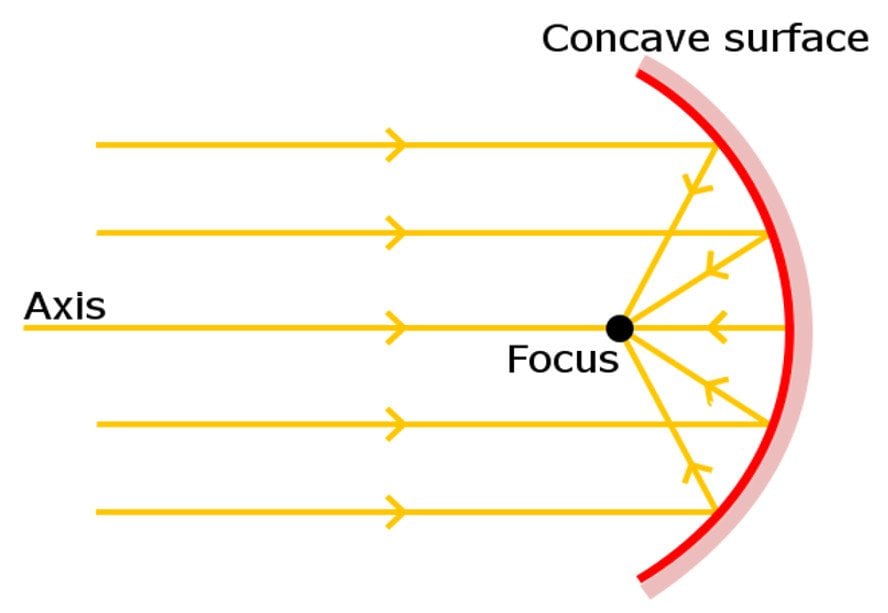 Reflection of light on concave mirror

Notice that the incident rays first fall on the surface in a uniform fashion, but due to the curvature of the surface, they are reflected in an unusual way. All of the rays come together to converge at a point that lies on the axis of the surface.

A satellite dish is a particular type of antenna that’s specifically designed to focus the incident rays on a particular broadcast source. It consists of a paraboloid-shaped surface, along with a feedhorn, which is positioned at the focal point of the curvature. 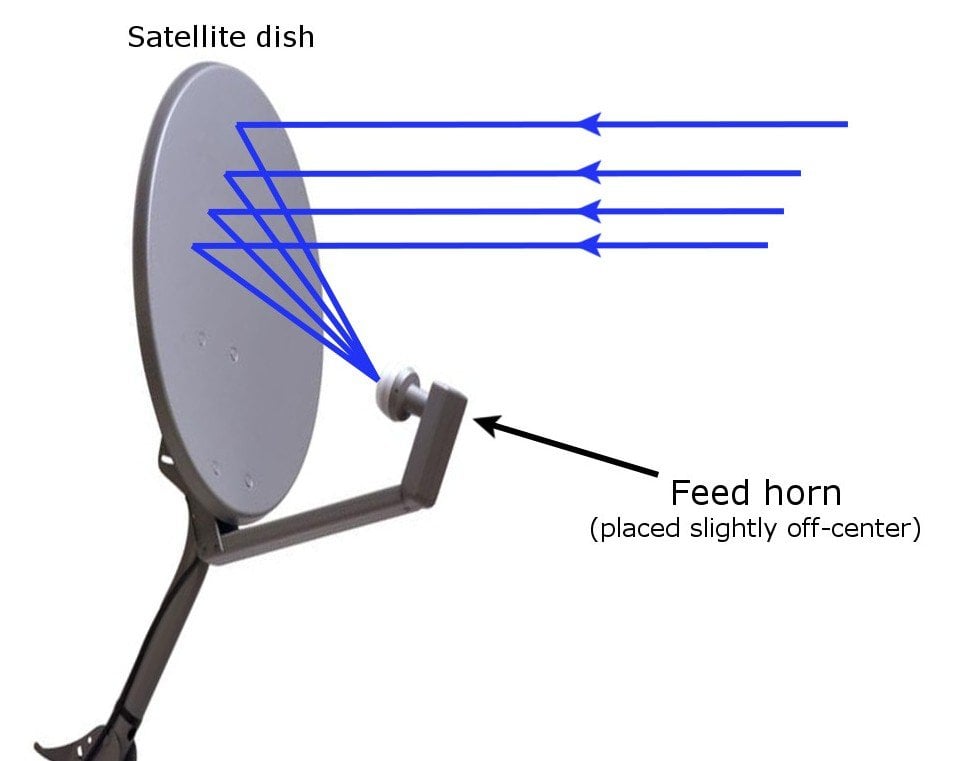 Note that the satellite dishes commonly seen in households are the ‘receivers’, i.e., they are at the receiving end of the signals being transmitted from a satellite, which is quite similar in shape, albeit much larger, and positioned in outer space. The dish placed on the rooftops of households can only receive signals that are transmitted by satellites.

But what about the curvature of the dish? 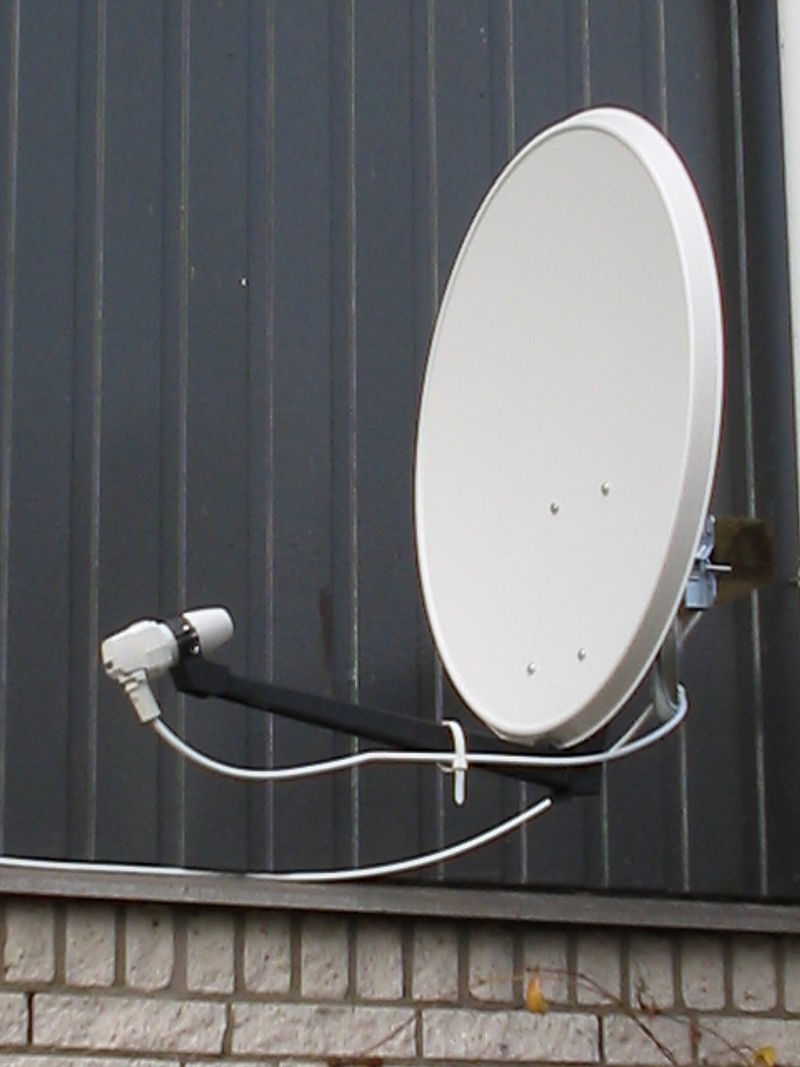 A communication satellite sends a parallel beam (collimated beam) of radio wave signals from outer space down into the atmosphere. Needless to say, these signals have to travel a very long distance to reach the dish antennas installed in your (and everyone else’s) house. When the parallel beam of signals strikes the curved surface, they converge at a single point in front of the dish, i.e., the focal point, and the incoming signal becomes much more consolidated, due to the combined energy of individual radio signals.

It’s interesting to note that the feedhorns of typical TV dish antennas are installed slightly below the middle of the dish, rather than precisely at the focal point of the dish. This is because dish antennas are usually offset antennas, i.e., a parabolic antenna whose feed (feedhorn of the antenna) is not set at the center of the curvature, but slightly off from it, hence the name ‘offset’ antenna. 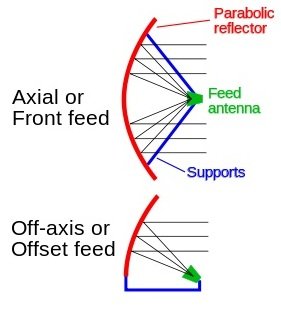 In a regular front-fed dish antenna, the very structure of the feed and its various support equipment hinder the incoming signals that partially obstruct them, decreasing the overall strength of the radio signal. Therefore, to achieve a strong signal on TVs, offset antennas are used.

What if TV dish antennas are not curved? 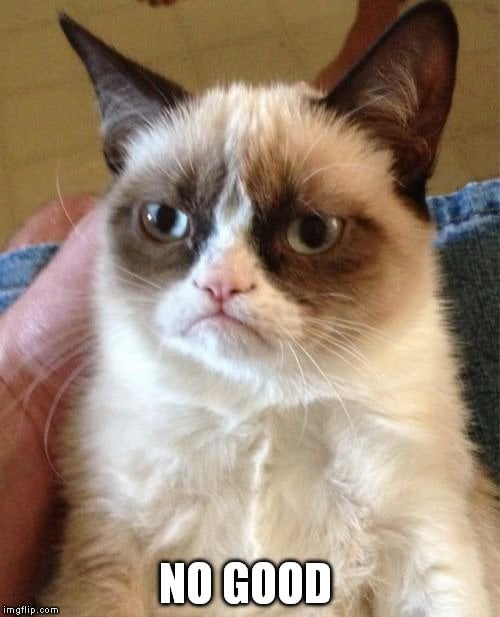 When your dish antenna is picking up a bunch of radio signals from the sky, you need to make sure that you extract the best ones by making the signals converge at a single point (feed horn) for maximum amplification or ‘signal gain’.

That’s precisely why you can’t have a flat dish antenna, as flat dish antennas are poor when it comes to receiving radio signals and making them converge at a single point. This is not just the case in TV dish antennas; in fact, you’ve probably noticed that all dish antennas, including the large ones that can be seen above radio stations, weather forecast stations etc. are curved for exactly the same reason.

Plain surfaces may be good for reflecting the incoming waves without altering their trajectory, but when you’re looking for convergence, concave surfaces save the day.