Scutoids are a new shape that was discovered in 2018. They were found in epithelial cells and are involved in the efficient packing of cells when curved,

Scutoids are the new shapes on the block. In a paper published on July 27, 2018 in Nature, scientists from the University of Seville in Spain and Lehigh University in the USA presented their discovery of this new geometrical shape assumed by epithelial cells.

They are a family of shapes that look like a cross between a cylinder and a prism, perhaps one that an angry ninja sliced off at one of the corners. This means that one of its faces (upper or lower) will have an extra side. The more technical definition of scutoids is as follows: “Scutoids are characterized by having at least a vertex in a different plane to the two bases and present curved surfaces”, according to the 2018 Nature paper.

This new shape looks similar to the scutellum in the thorax of beetles in the Cetoniidae subfamily, so the researchers named the new shape scutoid. 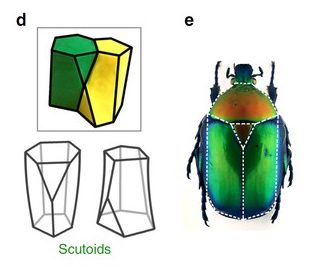 Scutoid looking like the scutullem in the thorax of some beetles (Photo Credit : Pedro Gómez-Gálvez/Wikimedia Commons)

Scutoids were discovered when the team asked the question, “How does the shape of a cell, in this case an epithelial cell, change when it curves?” Curving, bending, folding and twisting are all features that make up life.

During development, the transformation of a single-celled zygote to a wailing wrinkly newborn requires cells tessellating to make the required structures. Scutoids, the team found, made playing cellular Twister less expensive, in terms of energy.

However, why was a new funky shape required? Why don’t the existing shapes provide enough solutions? Simply put, why do we need a new shape to bend things?

Try taking a bunch of columns with a fixed number of sides and a fixed size, and making a tube out of it. There should be no holes or gaps. Neither should it be too large or too small. The tube should also be able to bend and contort freely.

If you took the time to try and make this tube, you’d soon realize that it isn’t as simple as it sounds. Curving something while satisfying all the above criteria is energetically difficult. The person bending the tube would have to constantly put in energy to keep the tube in its tube-like form.

The standard geometrical shapes we study in school aren’t that great when it comes to being curved and flexed. Unless your cylinders are made of some pliable material, it would be impossible to make them bend. Nature, thankfully, has those very pliable building blocks—cells.

The team of researchers behind the discovery set to tackle this very problem. Parts of this twisting problem have been answered, but scutoids provided another unique piece. The team used, worked with and discovered this shape in the most flexible cells in nature—epithelial cells. 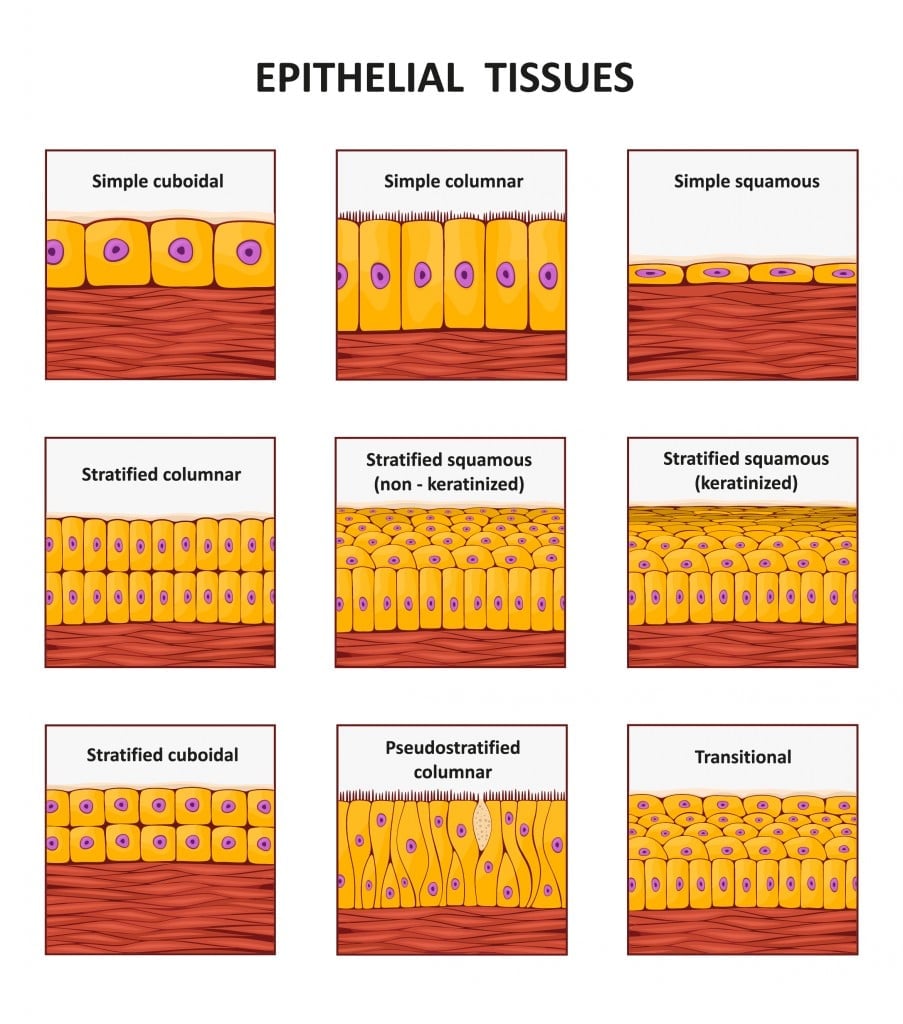 Epithelial cells are master shapeshifters. They take on all kinds of shapes, from those that look like amoeba (squamous) to columns (columnar) and squishy cube (cuboidal), to a prism that looks like a fancy bottle with an equally fancy name, frustum.

The diversity of these shapes is a result of the diverse set of functions that epithelial cells perform in living things. One of its functions is covering organs. Skin, our birthday suit, is primarily composed of layers of differently shaped epithelial cells. Being a good organ cover requires the cells to bend and curve along with the shape of the organ.

This leads us back to our problem of making a flexible tube (or any other curved structure). If nature was only restricted to columnar or cuboidal cells, all life would either be flat or a bunch of very limited shapes. 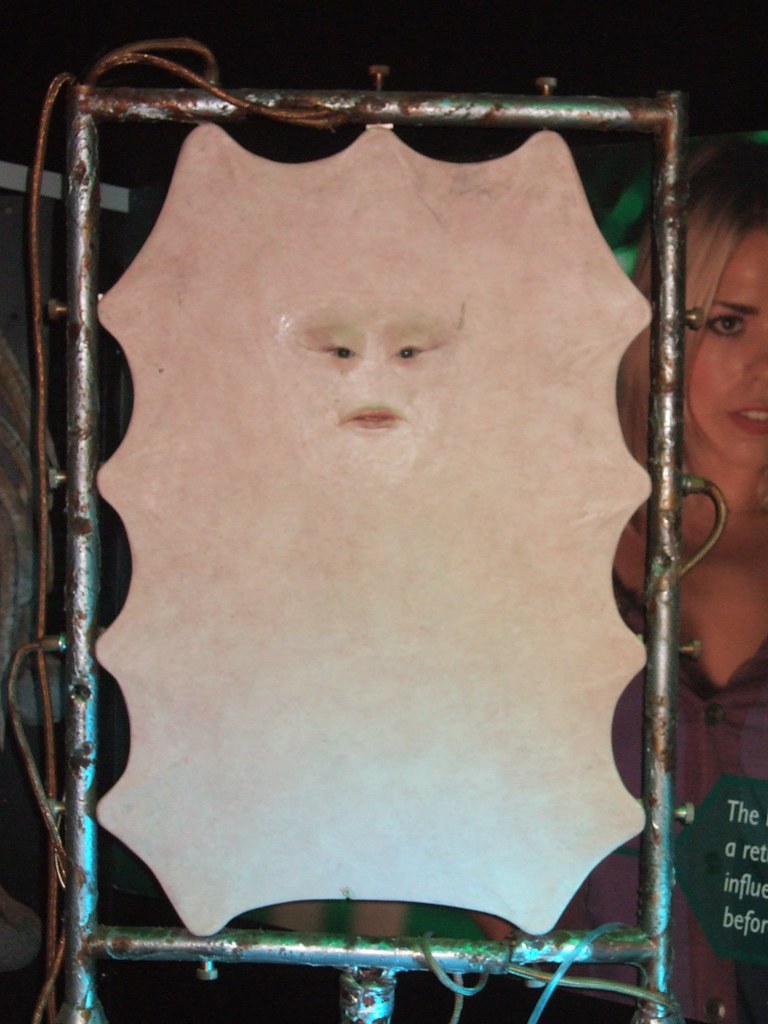 In reality, epithelial cells can actively change their shape to make long tubes and cover curvaceous organs. During the development of the embryo, epithelial cells undergo some of the most dynamic shape changes. Just take a look at a time lapse of a zebrafish embryo forming (add source) to understand the dynamic movement of these cells.

How were scutoid cells discovered?

The curious souls investigating this question simulated the curving of cells using a mathematical computational model called the Voronoi diagram (a diagram often used in architecture, geography, and epidemiology) to predict which shapes would be the most energetically stable at different curvatures and radii.

What their data predicted was a scutoid. This was only a prediction made by a theoretical model. To cinch the deal and legitimize the shape’s value to biology, they had to prove that it existed in nature.

They did this by looking at epithelial cells in the salivary glands of Drosophila larvae, where they found that similar shapes existed there. They saw that up to a certain radius of a tube-like shape, the cells would assume a frustum structure. On making the tube more asymmetric (the outer radius changing, while the inner one remains constant), the cells took on a more scutoidal shape.

This shape, it seems, is the most efficient way to tightly and compactly arrange a sheet of cells into a curved shape. 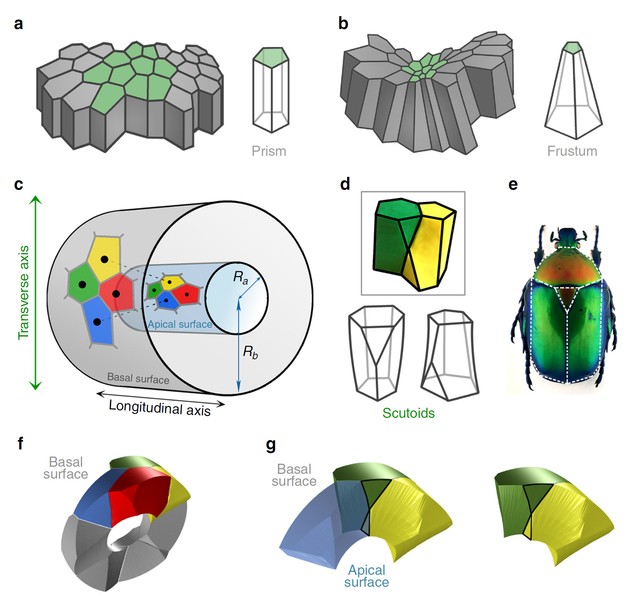 When the study came out in July, it prompted a joyous celebration of the scutoid. People couldn’t stop talking about this cool new shape and how it would advance the study of cell geometry. All this hullabaloo caught the eye of two physics departments of Aberystwyth University and the University of Dublin in Wales and Ireland, respectively.

Later that year, in the month of September, the physicists from these two universities showed that scutoids had already been looked at and characterized in botanist Edward Matzke’s work on the shape of bubbles in foam, though the shape had not been given a formal name.

The researchers themselves performed experiments with bubbles in foam to confirm past observations. They created soap bubbles between two glass plates that just close enough that a single layer of bubbles bounded on both sides by the plates are formed. Using this, they confirmed the presence of scutoids.

So, why should the layman care about a new shape discovered in the field of biology that only biologists talk about?

Since scutoids were found not only in developing flies, but also as cells undergo rearrangement during development, understanding why and how these shapes are formed could lead to advances in disease understanding and medicine.

The main fields that could benefit from this knowledge are medical technology and in vitro organogenesis. Making artificial organs requires an understanding of how our cellular architects build that organ and what building blocks are used. Understanding how scutoids are formed might lead to more accurate artificial organs.

However, we are still far away from that point. This field is still taking its baby steps and there are many questions that remain unanswered. Questions like, How do cells know they have to change shape? What genes, if any, are involved in this? What kinds of proteins are involved? all still need to be answered.

The entire molecular basis behind scutoids is waiting to be discovered. What we can be sure of is that to form all the crazy shapes that make you, me, a rabbit, and the humble fruit fly, geometry will bend to the will of nature to find creative solutions. 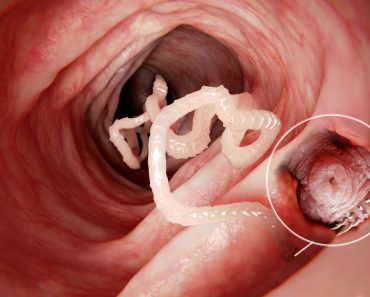