There are many things that need to go right for a chemical reaction to yield useful products: from the environment surrounding the reaction to the amount of the reactants present. Only once in a blue moon do all the reactants get converted into products.

In most reactions, one reagent (reagent and reactant are used interchangeably) is entirely depleted, while some quantity of the other reagents stays available for further reaction.

Since one of the reactants is not always available, the reaction hits a roadblock and does not continue. This reactant that gets completely used up, and thus limits the reaction from advancing forward, is called the limiting reactant or limiting reagent. 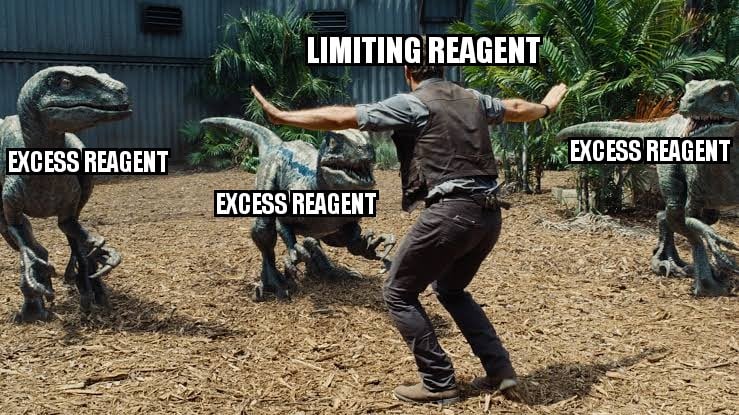 The limiting reagent in a chemical reaction controls how much of the final product will be produced.

What Is Limiting Reactant?

Based on their amounts and their roles, we classify reactants into two kinds: limiting reactants and excess reactants.

Limiting reactants are those that get completely utilized in a reaction first and thus limit the amount of product that will be produced. Excess reactants, on the other hand, are the reactants that are still present after the reaction has reached a standstill.

Let’s say that you’re standing in a queue at your favorite bagel vendor. The bagel guy comes out of the cart and announces that he only has 10 bagels left. Now, you look up from your phone and start counting the number of people ahead of you in the queue. You count a total of 20 people, which is 10 more than the number of bagels that remain.

In our example, the customers standing in the queue and the bagels are reactants, coming together to produce happy-fed individuals (end product).

However, the number of bagels will limit the number of happy-fed customers that can be achieved in the end, making it the limiting factor (agent), while the customers will be considered the excess reactants. 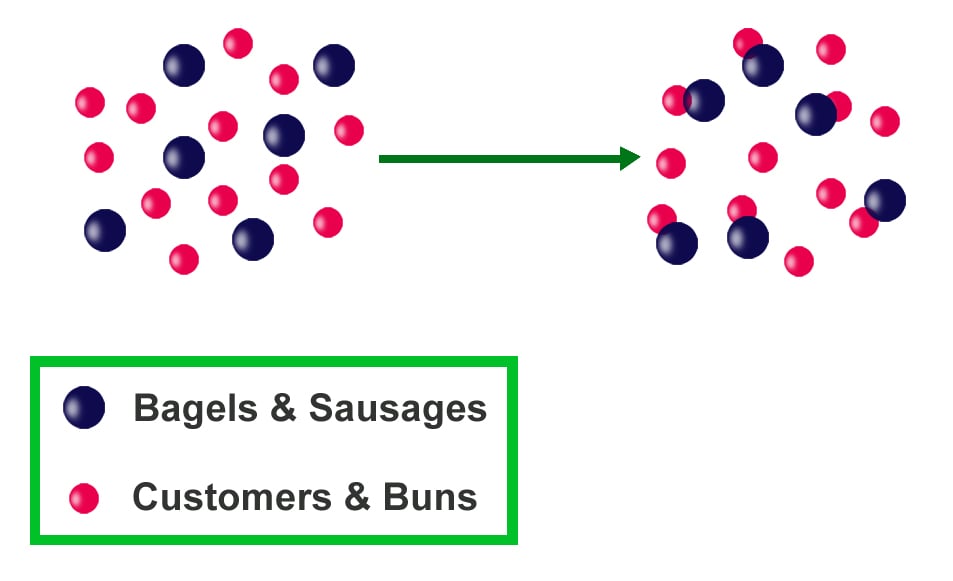 How To Find The Limiting Reactant?

There are a couple of ways by which one can determine the limiting and excess reactants in a reaction. However, the methods come with a prerequisite, which is to have a balanced chemical equation in hand.

The methods use stoichiometric coefficients from the balanced chemical equation to calculate ratios; if the coefficients themselves are incorrect, the final answers obtained will also be incorrect.

In the first method, we will find and compare the mole ratios of the reactants, while in the other one, we will find the amount of product that will be produced by each reactant. The one that produces the least amount of the end product is the limiting reagent.

Let’s apply this method to the reaction of ammonia (NH3) and molecular oxygen (O2) to figure out the limiting reactant of the two. The reaction between NH3 and O2 yields NO (nitric oxide) and H2O (water). The balanced chemical equation for the reaction is:

The equation is read as 4 moles of ammonia require 5 moles of oxygen to produce 4 moles of nitric acid and 6 moles of water.

This implies that we need 0.8 moles of ammonia for each mole of oxygen.

Next, we find the mole ratios of the reactants. In most scenarios, the quantities of the reactants will be provided in grams. We convert the gram values to moles and then continue towards finding the limiting reactant. Let’s assume that we have 100 grams of ammonia and oxygen each. To convert this into moles, we divide these values by their molecular masses.

We can continue forward in two ways. One, by assuming a limiting reactant and finding the number of moles of other reactants required, or the other, by finding the actual ratio and drawing a conclusion from its value. Let’s go down the first path and assume ammonia to be the limiting reactant.

But we only have 3.125 moles of oxygen available for the reaction, so we will run out of oxygen before ammonia. Therefore, oxygen is the limiting reactant and ammonia is available in excess.

Method 2: By Comparing The Amount Of Product Produced By Each Reactant

Now we find the amount of the end product (NO) that each reactant will produce.

As we can see, the limiting reagent or limiting reactant in a reaction is the reactant that gets completely exhausted and thus prevents the reaction from continuing forward. It also determines the amount of the final product that will be produced.

Also Read: Which Is The Most Reactive Element In The Periodic Table?

The theoretical yield calculated is usually higher than the actual yield that is produced. This happens due to a variety of reasons, including the reversible nature of reactions, the production of undesired by-products, errors in purification processes, etc.