Boomerangs come back to the person who threw them because of a phenomenon called gyroscopic precession. When a boomerang is thrown, the top wing is moving faster through the air than the bottom wing. This creates a torque that makes the boomerang tilt and gradually return to the thrower.

I was watching Justin Timberlake’s song “What Goes Around… Comes Around” on Youtube, and there was something about those words that made me drift off. The first thing my mind drifted to was a boomerang! I guess it makes sense somehow, but most people are probably already questioning my sanity, so I’ll just plead the 5th. I’ll be the first to admit that my brain is a bit weird.

Coming back to the point, boomerangs are wonderful objects. A person with a boomerang in his hand must feel like Thor with his hammer. You throw your boomerang in the air and then just stand there with your arms extended; eventually, the boomerang will return to your hand. Then, you simply turn around to the gracious round of applause from all the people who were watching you in awe.

Non-returning boomerangs have been used by humans at far back as 20,000-30,000 years; the oldest boomerang ever discovered was actually made from a mammoth’s tusk.

Non-returning boomerangs were mainly used by aboriginal Australians, but they also found use with ancient Egyptians and many other cultures. They were used as a weapon primarily for hunting. They were carved in such a way that they would stay in the air for the longest possible time and would travel in a straight line, so when thrown accurately, a hunter could hit an animal with the boomerang from a distance, and be able to put dinner on the table… err, ground.

The Return of the Boomerang

Basically, boomerangs were just really good throwing sticks that were used for hunting purposes. As it turns out, the “return” of the boomerang was a complete accident: one fine day when someone was carving his non-returning boomerang, he unknowingly carved it in such a way that when thrown correctly it returned back to the owner. Wow!

That guy might not have been so popular with his hunting buddies when his weapon simply returned to his hand, but it was still a pretty cool invention! 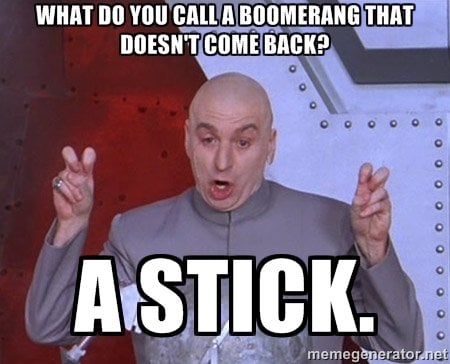 How Does a Boomerang Work

Boomerangs are some of the first man-made flying machines. A boomerang has two wings that are joined together in a ‘V’ shape; the wings of the boomerang are in the shape of an airfoil (like an airplane’s wings). An airfoil is practically flat at one end and curved at the other end, with one edge being thicker than the other. When a boomerang is thrown correctly, the airfoil provides the necessary lift for the boomerang to stay in the air.

The reason why a boomerang comes back is due to a phenomenon known as gyroscopic precession. 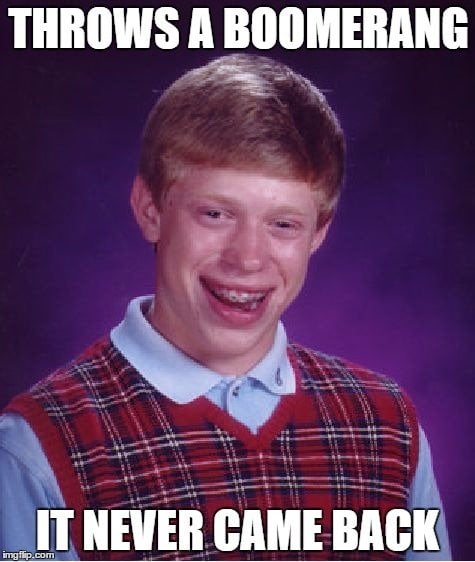 Making a boomerang return to you takes a lot of practice before you can actually make it return accurately.

The right way of throwing a boomerang is by holding it vertically, tilted at an angle of 10-20 degrees with the ‘V’ direction pointed towards you. Boomeranging is a difficult skill to master, but with practice, you can make your boomerang return right to your hand. It might take you some time, but once you have mastered it, the feeling when a boomerang returns to your hand is simply awesome!

So, what are you waiting for! Get out there and start boomeranging!