While they are certainly more evident at the microscopic scale, quantum effects aren’t confined to it.

I’ve always wondered if the White Queen’s belief in “six impossible things before breakfast” was a subtle reference to the bizarreness of quantum physics. After all, the quantum realm isn’t just full of Alice in Wonderland oddities; it requires one to navigate through a haze of probability and indeterminacy and diverges sharply from the common sense view of reality that pertains to the macroscopic world. 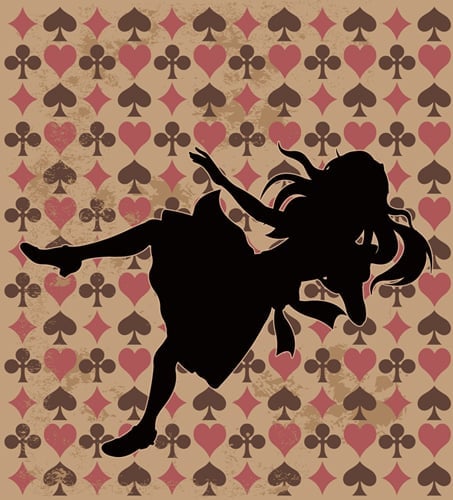 Exploring the quantum realm is like being led into Alice’s Wonderland, where common sense is regularly defied. (Photo Credit : Pushkin/Shutterstock)

A striking disjunction between the classical and quantum realms is that the quantum realm does not allow for its direct observation, but rather, can only be explored by the employment of instruments. While the smaller bits (microscopic entities) that make up familiar objects (macroscopic entities) do not conform to the classical rules and exhibit behavior that can be described only by quantum theory, familiar objects behave classically and appear not as a superposition of states, but with definitive values and properties.

As one’s description of reality is grounded in one’s experiences, it is hardly surprising that our quantum and classical realities seem irreconcilable.

One finds that a physical system’s behavior, upon attaining a certain size, begins to depart from the predictions of quantum theory, and the larger the system gets, the more closely its behavior adheres to classical physics, instead of quantum physics.

Since quantum properties assume significance at the microscopic level, one may erroneously infer at this point that quantum physics operates only at the atomic and subatomic scales, but this is not so.  Several examples of macroscopic quantum behavior exist. Superconductivity, superfluidity and BE condensation are some of the quantum phenomena that occur at the macroscopic scale.

Why one does not observe quantum effects like superposition in daily life is not because quantum theory breaks down for objects above a certain size, but because decoherence is brought about by inevitable coupling with the environment. When a system experiences decoherence, all quantum aspects are lost as the wave nature vanishes.

According to quantum physics, however, any attempt (by the outside world) that seeks to measure or acquire knowledge of quantum superpositions, be it via interaction with the environment or even a single photon, unravels the superposition states into a single classical state with definitive values. Additionally, it also destroys the ability of the individual states to interfere with each other. 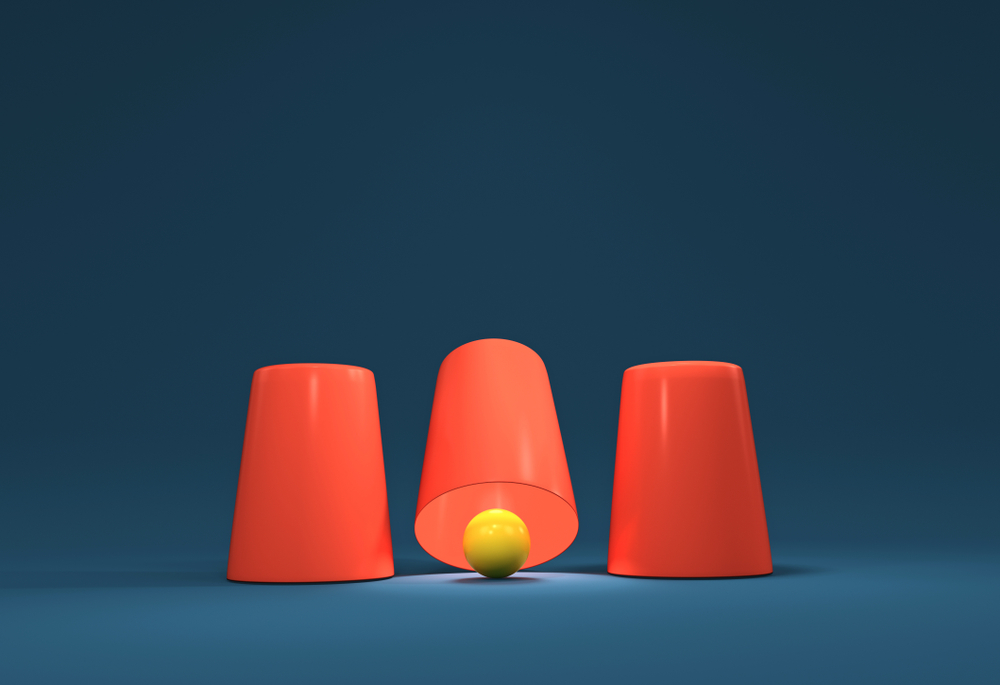 Take the cup and ball game, for starters. This immensely popular version of sleight of hand involves a ball or a small object concealed under one of three inverted cups. Rapid shuffling ensues to make the spectator lose track of the position of the ball.

One believes with absolute conviction that whichever cup the ball is found under is the cup it had been beneath all along. In the quantum realm, however, this poses a conundrum. When we consider the ball as a quantum entity, described by a wave function, numerous questions arise.

Was the ball really under that one cup the entire time? Was it not the act of looking that made the ball appear where it was observed to be?

Measurement is therefore responsible for an entity becoming an object with definite outcomes, rather than defining its existence as a blur of possibilities. The question of whether an entity shows particle or wave behavior depends on the measurement being performed upon it. A measurement (in physics) entails any interaction of the quantum system with the environment and does not require an observer to make an observation, which would lead to the collapse of the wave function. 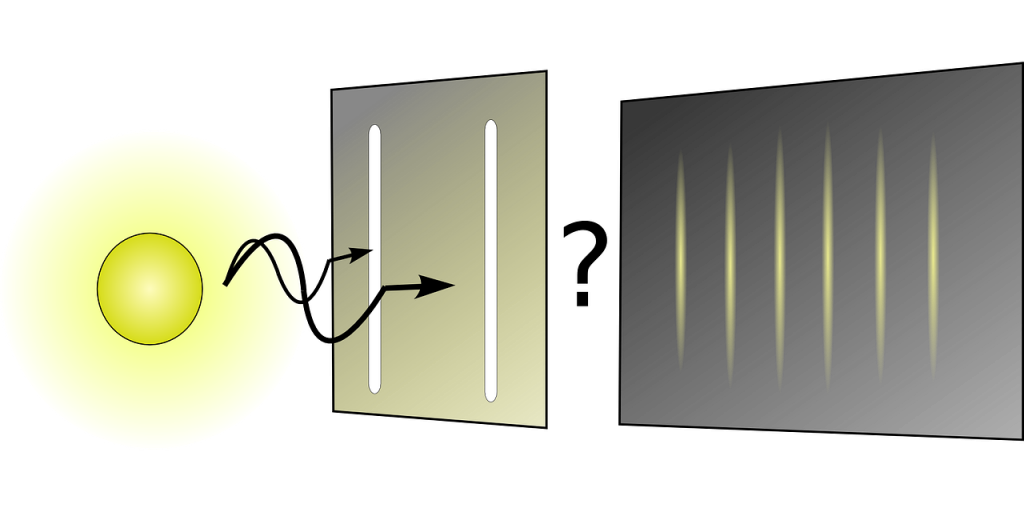 Quantum entities behaves as a wave or particle depending on the circumstances and the effect being observed. (Photo Credit : Pixabay)

Why Don’t We Observe Wave Behavior For Large Objects?

Also Read: What Is The Observer Effect In Quantum Mechanics?

Here’s a simple analogy: A team of synchronized swimmers will not randomly splash water about like a group of kids playing in a swimming pool while they are performing. The swimmers can organize their act in a manner that all the little waves created from their movements show up as one large water wave.

Alignment of the wave natures of the constituent bits of matter leads to an overall coherent wave function for the object. The more coherent an object, the more pronounced is its wave behavior.

The classical world is basically the world as physics viewed it before the advent of quantum mechanics, wherein a physical system is a collection of objects with definite and unambiguously ascribable properties. In the quantum realm, however, such properties do not have definite values and are more often than not involved in interactions with the environment.

So long as a measurement is not made on the system, the different values that a property can have sort of coexist. One might say that the system’s behavior is the combined result of many different systems all interfering with each other.

However, there remains a consistency to be maintained in terms of how these properties are associated with each other. Coherence does not imply that a system is devoid of structure; it means that the system is freer in terms of how it can evolve in time.

Recovering superpositions gets even harder for macroscopic objects, which are interacting massively with their surroundings, since quantum effects are fragile and easily disrupted/washed out by interactions with the environment.

This happens via a process known as Entanglement, which compels the quantum system (of particles) and the environment to be inseparable. The interacting parties are entangled into a combined state in a manner such that the quantum state of any individual entity cannot be described independently of the state of the other entities with which it is interacting. Thus, the superposition of the original particle gets spread into the environment.

When many particles are interacting (i.e., in large objects), this scrambling tends to happen almost instantaneously. As the superposition extends into the environment, the wave function of the initial particle is mixed with those of its surrounding particles and the phase relationship that needs to be retained is lost. 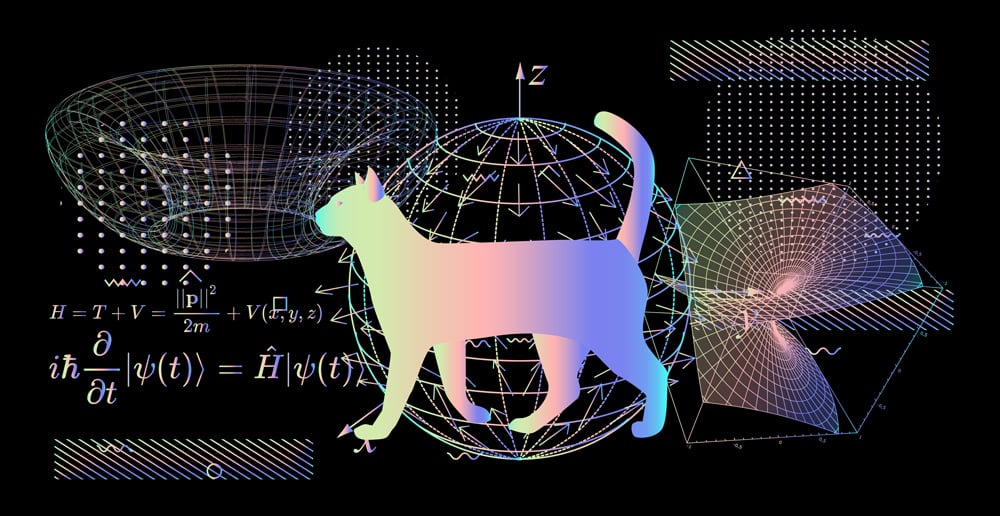 According to  quantum theory, particles can exist in a state of superposition until a measurement is made on the system. (Photo Credit : local_doctor/Shutterstock)

The behavior of x quantum entities cannot be said to be equal to the behavior of one entity times x. For a single particle, uncertainty looms large; however, given that quantum theory is inherently statistical, for a statistically significant collection of particles, the uncertainty becomes irrelevant and the system follows the equations devised by quantum mechanics with reasonable predictability.

A Fundamental Limit For Quantum-classical Transitions?

Whether or not there exists a hard limit for transition between the quantum and the classical remains a tantalizing question; however, if such a limit exists, it has not been discovered yet.

In 1999, a team at the University of Vienna investigated how big an object could get whilst still retaining its wave nature by conducting a double-slit experiment using fullerene (C60) molecules. They found a clear interference pattern, suggestive of superposition occurring even in molecules as large as C60 (0.7 nanometers across). Additionally, they also observed that the interference pattern gradually disappeared as a background gas was released into the chamber. As predicted, the collision of the molecules of the gas with the fullerene drove the wave nature away.

Another team in 2011 reported that coherence could be set up in carbon-based organic molecules consisting of around 430 atoms each, measuring up to 6 nanometers across; in 2019, the interference experiment was performed by increasing the mass of the interfering particles up to 2,000 atoms. In 2020, interference patterns were studied for a biological molecule — known as gramicidin A1.

Quantum entanglement has now been observed on a macroscopic scale. Physicists built a pair of aluminum drums the size of red blood cells and used microwave frequency to make the drums vibrate in sync. The two drums shared an entangled state, i.e., upon vibrating, the drums’ amplitudes were correlated. ​A recent experiment may have entangled a living organism—the remarkably robust Tardigrade—with two superconducting qubits.

Roger Penrose suggested that gravity might play a role in the collapse of the wave function (which describes a system as a superposition of multiple values of Position, momentum etc.). According to Penrose’s proposal, while electrons might stay in superposition for years, gravity sets a limit for massive particles, implying that anything on a macroscopic scale collapses immediately. Therefore, for systems above a certain mass, quantum behavior vanishes.

Also Read: Why Is Quantum Mechanics So Difficult To Understand?

The Ghirardi–Rimini–Weber theory, (objective collapse theory, 1986), proposes that a particle’s wave function collapses by itself, randomly and spontaneously. For a single particle, such a collapse would be rare, but for macroscopic systems like Schrodinger’s cat, containing trillions of entangled (interacting) particles, this process is escalated; superpositions swiftly fade away as the collapse of one triggers the collapse of the rest.

Quantum physics affects everything. While the laws of quantum physics in no way limit “quantumness” to microscopic particles, for objects that are much larger, quantum effects are so vanishingly small that they are unobservable in practice. Even so, quantum behavior at the macroscopic scale does exist and has been observed!