Have you ever been driving down a long country road and been awestruck by how massive the moon appears far away on the horizon? It looks so inviting and luminous, as though it were approaching Earth to take a closer look!

Similarly, have you ever been sitting on a beach next to your favorite romantic companion, watching the sunset, and been stunned by how huge our life-giving star appears as it dips below the edge of the waves?

If you’ve ever rubbed your eyes furiously at the sight, convinced that you were hallucinating (or that the world was about to come to a fiery end), don’t worry…. you’re not the only one.

The Greatest Trick on Earth

All around the world, for millions of years, every creature that has looked at the Sun or moon on the horizon has noticed this size differential, and scratched their heads in confusion. When the moon is directly overhead, it seems small and very far away, but on the horizon, it seems to swell in size. Back in the times of ancient Greece, Aristotle had a few thoughts about this strange phenomenon, citing that the bizarrely large size of the moon was due to a magnification from the Earth’s atmosphere. Although Aristotle had plenty of wisdom and clever explanations for phenomena of the natural world, this was not true. Although the color of the moon can be distorted by the atmosphere of the planet, the size of the sun and moon is not affected!

No, this seemingly miraculous increase and decrease in size of celestial bodies is nothing but an optical illusion, known famously as the Ponzo Illusion. Illusions are essentially tricks that our brains pull on us, and in the case of the sun and moon size, our brains aren’t doing us any favors! When looking at the image below, our brains perceive the top yellow line as larger, due to the narrowing of the tracks, like looking down a long road to the horizon. However, the two lines are actually identical in length! 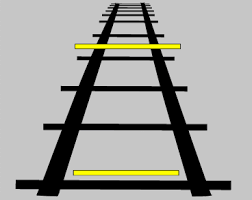 When we look at the horizon, and actually anything in a horizontal plane, we expect it to be farther away that anything over our heads. However, the moon is about 400,000 km away from Earth, so its apparent size from any point on Earth should be about the same. Therefore, when our brains perceive the moon or Sun on the horizon, our brains tell us that it is physically larger. When the same celestial object rises above our heads, our brains make the Ponzo flip and perceive it as being smaller. If you think of the sky above you as an entire hemisphere, rather than a flattened bowl, then the point above your head should be the same distance away as the horizon. Unfortunately, our brains assume that the horizon is much farther away, so when we place the same-sized object in those two frames of reference, our brain interprets it as larger!

The same thing can be shown in countless optical illusions, mainly when we perceive identical objects along a horizontal plane. Consider the image below; the man on the far right looks quite a bit larger than the silhouette on the far left, right? Although your brain is telling you that the silhouette on the far right is larger, this is just another example of the Ponzo Illusion! The man on the far right is further towards the “horizon”, an effect that is magnified by the lines on the background of the image, but in fact, all three silhouettes are exactly the same size!

The Illusion Goes Even Deeper…

Although our brains trick us into thinking the moon is larger/closer on the horizon than at its zenith, it is actually farther away! In other words, if we perceived things accurately, we would actually see that the moon on the horizon is slightly smaller, since it is technically further away. When we are looking at the moon directly over our heads, we are as close to the moon as we ever get.

However, when we see the moon or sun on the horizon, we are actually further away from the celestial object (approximately the same distance as the Earth’s radius). If anything, the moon and Sun are slightly smaller on the horizon, in reality, but our brains aren’t about to let us see things as they really are.

While our brains are unbelievably cool machines that allow us to observe, process, and analyze the world in countless ways, there will always be little hiccups and illusions that get the better of us; fortunately, the Ponzo Illusion allows us to perceive the Sun and moon in truly beautiful ways, so we can’t complain too much!