Chris’ father gave him a book on his birthday. Immediately after ripping apart the packaging, Chris retrieved the book and gazed at it for a moment. His father thought that he must really like the stories in the book or the author, but in the next moment, Chris opened the book and stuck his nose into it.

His father shouldn’t have been so surprised, however… I’m sure many of you do the same thing.

Nothing, absolutely nothing can match the magical smell that comes out of books. Try pressing your nose against a Kindle or an iPad… it simply isn’t the same.

Different people seem to like different smells when it comes to books. There are those people who like the smell of old books and there are others who like the smell of a book being opened for the first time. The aroma that emanates from books is caused by a number of chemical reactions – not just the sweet smell of great prose!

Old books have a sweet smell with notes of vanilla flowers and almonds, which is caused by the breakdown of chemical compounds in the paper, while new books smell like they do because of the carious chemicals used when they are manufactured.

Why Do Books Smell?

The chemical breakdown, over a period of time, of the compounds within paper produce the smell. Paper consists of cellulose and small amounts of lignin (a complex polymer of aromatic alcohols). Paper that is even more fine contains less lignin than cheaper materials, like the paper used in newspapers. 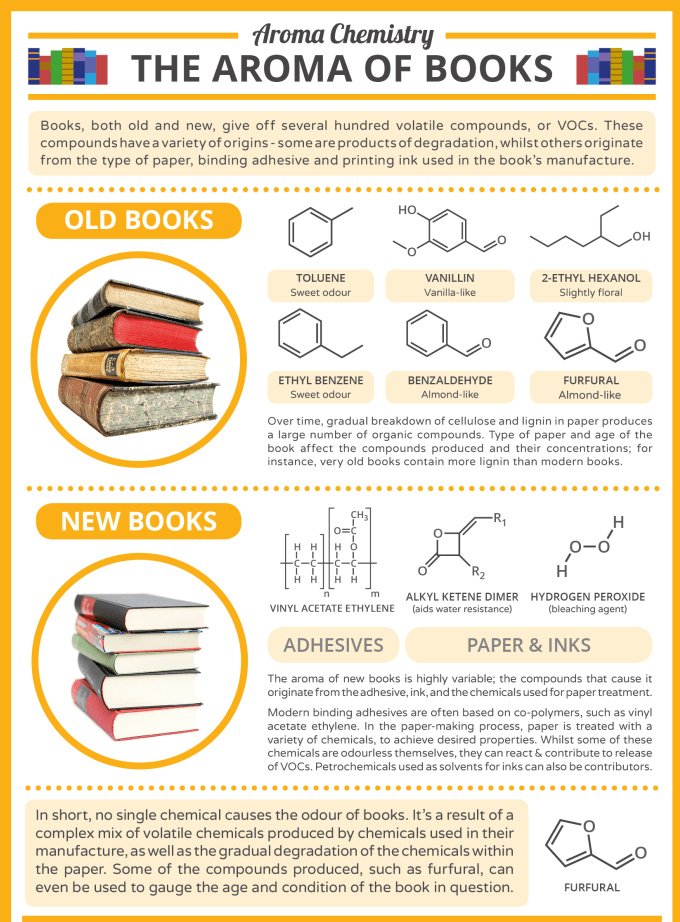 Lignin is the same chemical that makes the color of old paper yellow, as it becomes oxidized over a long period of time to break down into acids, which in turn break down to cellulose. Now, let’s get to the chemistry of that remarkable smell.

New Books: The smell of new books can be attributed to three factors: the paper itself (it smells good because of the chemicals used to manufacture it), the ink used to print the book, and the adhesives used in the process of book-binding.

If we look at the smell of paper itself, we would find that a lot of chemicals are used to manufacture paper (although it is largely manufactured from wood pulp). Furthermore, there are certain chemicals, such as sodium hydroxide (caustic soda), that are added to the paper to diminish its acidity and swelling of the fibers of the wood pulp used in the paper.

It’s true that the content of any book is the real purpose of purchase, but I can assure you, if you read a lot, then you are almost certainly a fan of that legendary book smell too!