A green flash is a phenomenon that occurs during sunset and is caused by the refraction of sunlight. It is visible to the naked eye only when enhanced by a mirage.

If you thought the Green Flash was a new version of The Flash in a green uniform or some distant cousin of the Green Hornet or the Green Lantern… then congratulations! You’re a sci-fi nerd like me!

However, that’s not the green flash I’m talking about. A green flash is a rare sight to witness when the sun is at the horizon i.e., either during sunrise or sunset.

As we all know, the sunset presents with the hues of yellow, orange and red, but occasionally, a green flash can be observed at the rim of the sun’s disc when it dips at the horizon. It looks something like this: 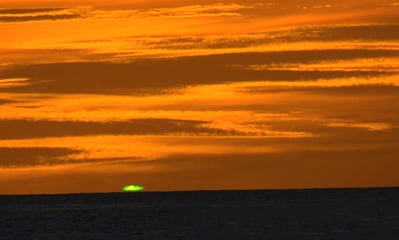 What causes the green flash phenomenon? Why does it only show as a green flash and not any other color?

What causes the green flash?

As the sun dips over the horizon, a giant beam of green light rises from the sun for a few seconds and then dwindles off in the sky. The green beam of light might be interpreted as an extra-terrestrial affair by someone who isn’t familiar with this phenomenon. Some may even consider it to be an alien aircraft leaving our atmosphere.

In fact, a simple and common phenomenon—refraction—is the reason behind the green flash.

The green flash is visible to the naked eye only when enhanced by the mirage effect. A mirage is an optical illusion caused by the inversion of the image by atmospheric refraction. 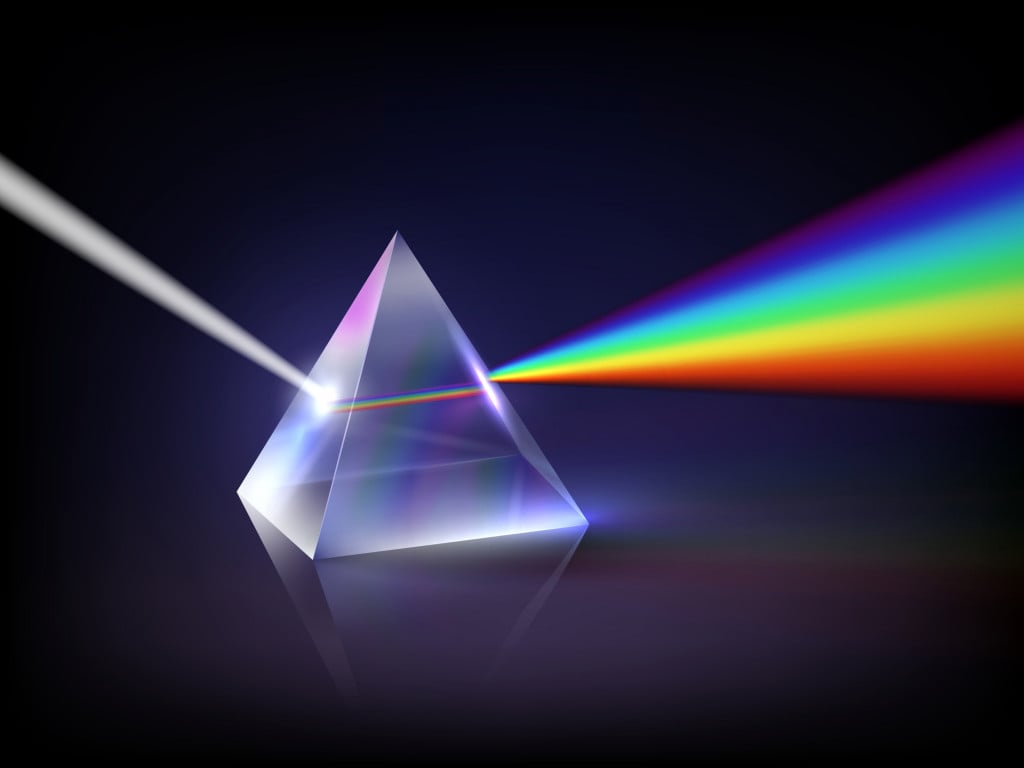 Refraction of white light by a prism (Photo Credit : ONYXprj/Shutterstock)

The atmosphere has uneven density; it decreases with an increase in latitude. This means, as you go higher up in the sky, the air will get lighter. Thus, the sunlight is traveling through a dense column of air when the sun is low in the sky during sunset or sunrise.

The atmosphere bends (refracts) the white light of the sun and separates it into various colors depending on its wavelength. Colors such as yellow, orange and red have long wavelengths, whereas blue and violet colors have shorter wavelengths. 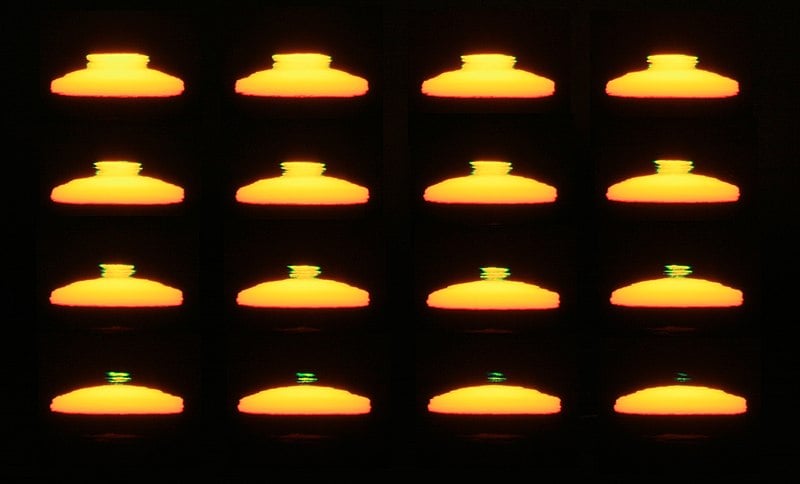 During sunset, the sun is surrounded by shadow suns of different colors caused by the refraction of sunlight. Basically, the red sun settles first, followed by orange, yellow, green, blue and so on. The atmosphere absorbs light with long wavelengths, so the red, yellow and orange shadow of the sun is visible during sunset. Whereas, the shadow with short wavelengths is scattered by the earth’s atmosphere.

This leaves behind only one shadow that is strong enough to be visible—the green shadow. It is visible only for a second or two when the sun sets below or rises above the horizon.

Why only a ‘green’ flash?

If blue and violet shadows of the sun are the last to leave the horizon, then why can’t we see a blue flash or a violet flash? The answer to this is quite simple… lights with shorter wavelengths scatter more into the earth’s atmosphere after colliding with molecules in the air. This is why the sky is blue. The scattered blue light spreads in all directions, giving the sky its blue color.

However, it’s not impossible to observe a blue flash. If the sky is extremely clear, with only a little scattering of light, it can allow for the emergence of a blue or violet flash.

How long does a green flash last?

On October 16, 1929, during Admiral Byrd’s expedition to Antarctica, the green flash phenomenon was observed on and off for 35 minutes. But how could it go on on for so long?

The duration of green flashes that are not enhanced by a mirage is said to be inversely proportional to the vertical speed of the sun at the horizon. The speed of the sun, in turn, depends on the latitude at which it is observed and the time of the year. Simply put, if the speed at which the sun sets is high, the duration of the green flash will be small, and vice-versa. 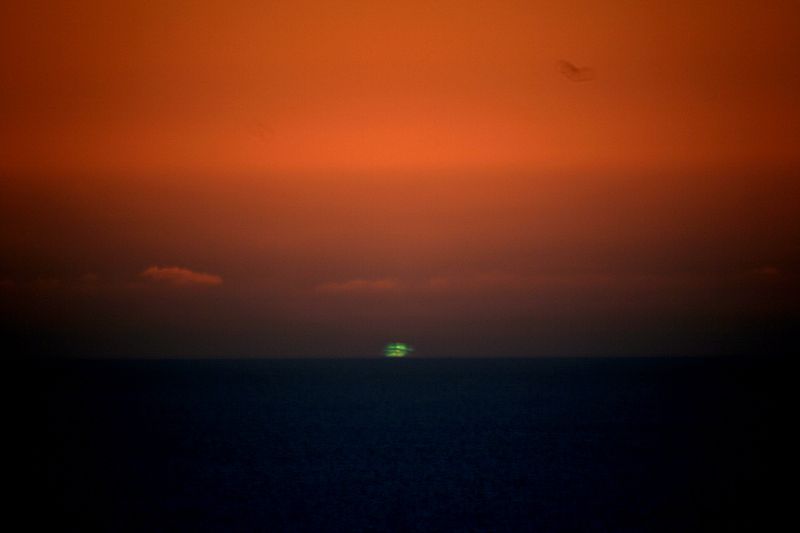 This explains the 35-minute green flash observed in Antarctica. During the summer, the sun in the Polar Regions tends to string along the horizon with a very small vertical speed. Due to this, the resulting green flash is visible for a long time. Similarly, at lower latitudes, such as central Europe, the green flash lasts for no more than 1.5 seconds.

The chances of being able to observe a green flash sighting are high at areas that provide a clear view of the horizon, looking through pollution-free air, such as at the ocean shore. Flat grasslands and deserts also provide the appropriate conditions to view the green flash.

So, the next time you take a walk along the beach to enjoy a sunset, keep an eye out for the green flash. Just a word of caution… don’t look directly at the sun if it ‘s too bright! 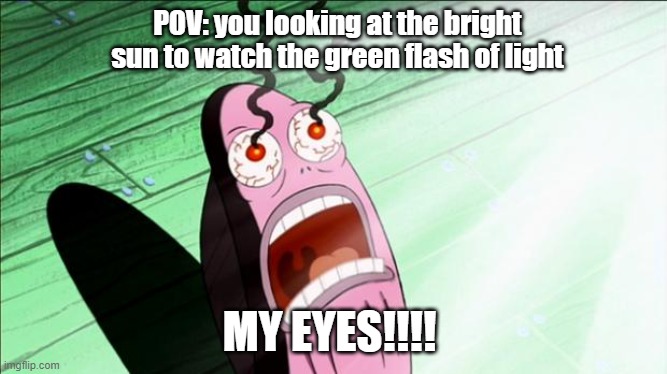