Without any atmosphere, or the ability to create one, the moon cannot provide the basic conditions for life to develop.

When you stare up into the night sky, it’s hard to miss the brightest object and our closest celestial neighbor – the moon. It has fascinated humans for thousands of years, was worshipped as a god in the past, and has inspired countless generations to wonder whether alien life may be waiting for us on our doorstep. However, with the advent of space travel, our 6 Apollo missions to the moon, and our improved ability to learn about the composition of celestial bodies from Earth, we now know that the moon cannot and never has supported life.

The questions, therefore, is why does the moon contain no signs of life?

What is the Moon?

The moon is our planet’s natural satellite, orbiting Earth every 27.3 days and rotating on its own axis every 27 days. Interestingly enough, this similarity in its rotation and orbit means that the same side of the moon always faces Earth, a phenomenon called synchronous rotation. The moon is roughly 27% the size of the Earth, with a diameter of 3,474 kilometers.

There is some debate about how the moon was formed, but the prevailing theory is the giant-impact theory, which argues that in the early days of our planet’s formation, before any life had developed, another planetary body the size of Mars crashed into the young Earth, jettisoning billions of tons of elemental material into the orbit around the planet. There was so much debris that gravity was able to form and pull it together, forming what we know today as the moon. Since that point, the Moon’s orbit has regularized around our planet, so accurately that we base our calendar progression off its changing phases.

However, while the moon often feels like another planet, a moon is very different than a planetary body. The most basic different is that a planet orbits a star, whereas a moon orbits a planet. Furthermore, in the case ofEarth and its moon, the composition of the planet is different. At the center of the Earth is a dense core of heavy metals, which creates a magnetic field and a strong gravitational pull, which enables the planet to retain an atmosphere. Without our atmosphere, none of us would be here today, nor would you be reading this article!

Does the Moon have an atmosphere?

As mentioned above, the moon does not have the same composition as the Earth, and while some of the elements present on the moon are the same, this is likely because of the moon’s formation (the Giant-Impact Theory). In general, this different in composition means that the moon cannot have an atmosphere because it is not geologically active. Without the release or production of gases in the core of a planetary body or moon, an atmosphere would be unable to form – atmospheres don’t happen spontaneously!

Furthermore, even if those gases were to be produced or released, the low gravity of the moon would make it difficult to hold onto those molecules. For a molecule to be released into the emptiness of space, they need to exceed the escape velocity of the planet or moon. When the sun strikes these molecules, it energizes them, and if they are moving fast enough to overcome the pull of gravity, they will escape. In the case of Earth’s moon, any light molecules present there would be immediately energized by the sun, due to Earth’s proximity to our star, and those molecules would escape into the emptiness of space, making the formation of an atmosphere next to impossible.

Is life impossible on the Moon?

Without the presence of an atmosphere, there is no chance for the formation of more complex molecules that are required for life (as we know it). When astronomers peer at distant exoplanets and moons, they are primarily searching for signs of water, or the possibility that water once existed there. Our understanding of life is Earth-centric, and we know that water was integral in the development of life here.

On the Moon, based on the history of its formation, its lack of an atmosphere and its classification as a “dead” rock, there is no feasible way for life to develop and prosper on the moon. This is not to say that life cannot survive on the moon, as many science fiction fans are hoping. Our technological advancements mean that we may someday be able to colonize the moon, although recent decades have seen our attention shift to the possibility of establishing a colony on Mars. 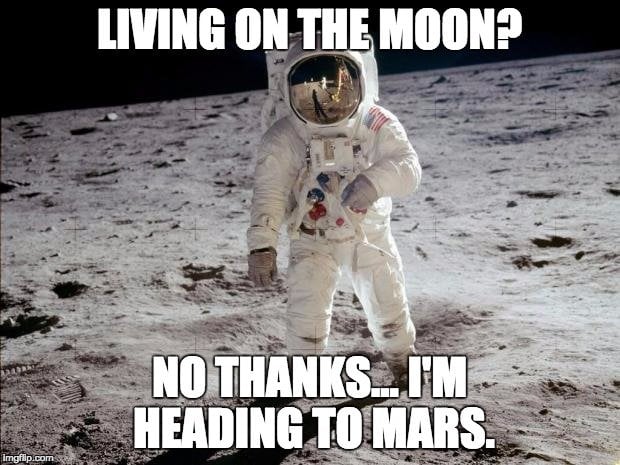 The only life that could survive on the moon (or anywhere else in the vacuum of empty space) is the tardigrade. Also known as the water bear, this microscopic organism has been found all over the world and has demonstrated remarkable hardiness to temperature and pressure extremes, as well as surviving without any water. To date, this is the only living organism that has been shown to survive in the vacuum of space, which is a combination of intense pressure, low temperature and high radiation from the sun’s rays.

A sample of tardigrades were placed on the outside of a shuttle that orbited the planet for 10 days and then re-entered the atmosphere. Shockingly, more than 60% of the tardigrades survived the experience, which has fascinated scientists ever since, leading to their better understanding of tardigrade’s “stasis” or “dessication” strategy.

Going into detail about what makes tardigrades so special is beyond the scope of this article, but when it comes to life potentially surviving on the moon, they are the only creatures who could do so – as fas as we know!