Scientists believe that Europa has all the ingredients required for life to form—liquid water, organic chemicals, and an energy source. Therefore, the icy moon possesses the potential to harbor life.

Are we alone? Is there life beyond the pale blue dot of Earth?

These questions have haunted every human on this planet at least once in their life. Extra-terrestrial life is something that has intrigued us for centuries, but getting firm answers on the existence of “other” life is very difficult.

With trillions of galaxies and billions of stars in each of them, there must be at least one other planet that harbors life, right? However, with our current technology, it is extremely hard to approach other stellar systems, let alone galaxies, in search of life.

So, the next best step is to look within our own solar system. Scientists have been doing this for decades, and have actually found a place that might harbor life—the icy moon of Jupiter, Europa.

But why is this moon, located near the most hostile planet of our solar system, covered with ice sheets, exposed to deadly radiation, and without an adequate amount of sunlight, considered the best place for life to flourish? 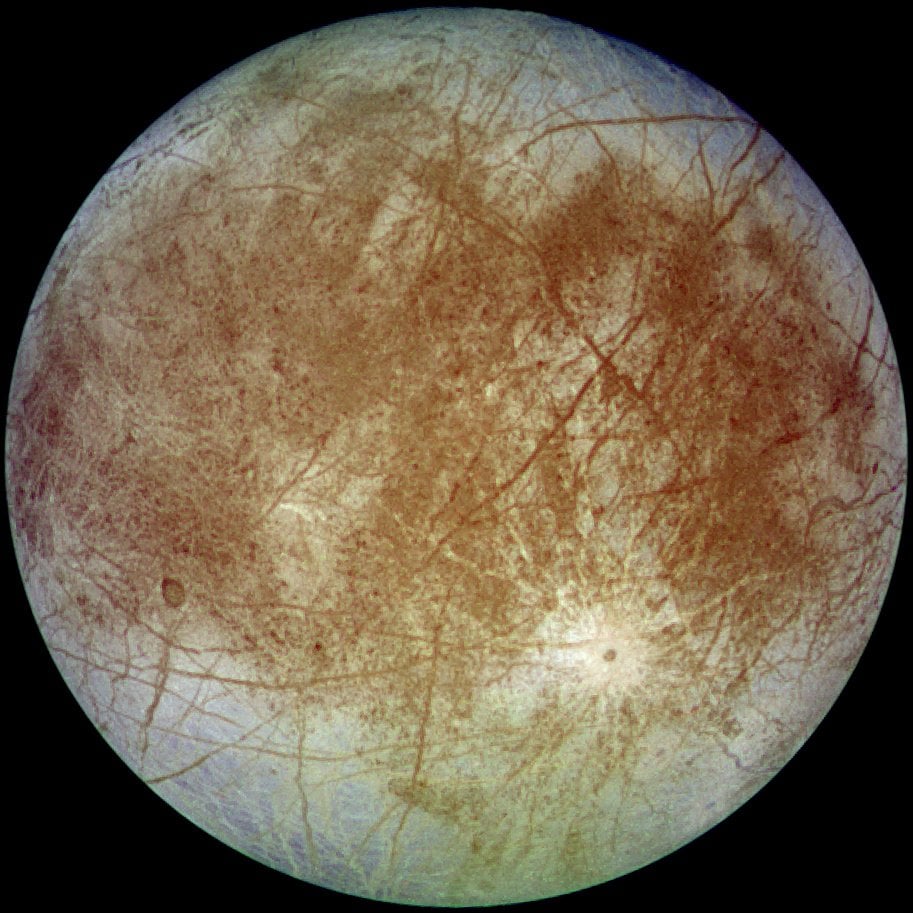 The Necessary Conditions For Life

The three major ingredients required for the formation of life are: Among these, liquid water is the most important and the most difficult component to obtain. If a celestial body is too close to the sun, the water evaporates. If it is too far, the water freezes to ice. In between these extremes is a perfect zone where liquid water exists and supports life called the Habitable Zone or the Goldilocks Zone. In our solar system, Earth is the only planet in the Goldilocks zone.

Europa, however, lies far beyond the habitable range, with a surface temperature of -160°C, but it supposedly has twice the amount of liquid water than all the oceans of Earth combined.

Europa, named after the Greek goddess of the same name and discovered by Galileo Galilei in 1610, is one of the 79 known moons of Jupiter. It is the sixth-largest moon in our solar system, at about 90% the size of Earth’s moon. Although smaller than our moon, it shines five times brighter, due to an icy crust that reflects a large amount of light.

The whole moon is covered with a shell of water ice, which is estimated to be about 15-25 km thick. Sunlight takes roughly 45 minutes to reach Europa and is therefore very faint. Europa is supposed to have an iron core, a rocky mantle, a layer of ocean with liquid water, and an icy crust crossed with brownish lines called lineae. Scientists believe that this layer of ocean, between the icy shell and the warm rocks, provides a perfect condition for life to flourish. Where Does Europa Get Energy From?

Solar energy cannot power Europa, but the moon has access to the second-largest celestial body in our solar system—Jupiter.

Just like the earth and moon, Europa is tidally locked to Jupiter, meaning that the same side of Europa faces Jupiter all the time. Furthermore, it has an elliptical orbit. As a result, the gravitational pull experienced by the moon varies; that is, the closer Europa is to Jupiter, the stronger the tidal bulge becomes. This results in the moon being stretched, through a process called tidal flexing.

The strong tidal action from the giant Jupiter warms up Europa by converting tidal energy to heat energy. In simple words, the gravitational energy of Jupiter generates heat in Europa’s interior, which might aid in melting some of the ice. According to numerous studies, this can also heat up the core of the moon and lead to the formation of hydrothermal vents or volcanoes erupting with hot, nutrient-rich water, effectively providing the perfect environment for life. Plumes of water on Europa

The tidal flexing and the hot core, if present, would provide enough temperature for liquid water to exist beneath the icy shell. Evidence strongly suggests that Europa contains a hidden ocean underneath. The Hubble Space Telescope has also spotted plumes of water jets spraying out from the moon’s vents.

Images by NASA’s Galileo spacecraft show that the ice sheets of Europa are similar to the tectonic plates (the plates whose movements cause earthquakes) of Earth. According to geologists, plate tectonics is due to the presence of heated fluid beneath the crust. On Earth, the fluid is magma, but on Europa, it could be liquid water.

Europa is the smoothest body in our solar system. It has no deep craters, which indicates geological activity, and suggests that the ice on the moon melts and refreezes from time to time. Finally, the strongest evidence for its life-bearing potential is the magnetic fields of Europa. Jupiter’s magnetic field induces a strong magnetic field on Europa, whose direction, strangely, keeps changing. This variability must be due to the presence of a global conductor. For an icy moon, the most probable conductor is liquid water, implying that Europa may have a salty ocean!

Studies show that Europa contains the elements required for life like oxygen, hydrogen, nitrogen and phosphorus, since the moon formed along with the solar system, and is composed of its leftovers. Also, asteroid and comet interactions might further deposit chemicals on the moon’s surface.

The brownish lines over the surface of the moon, called lineae, are a strong suggestion that there are chemicals on the surface. These lines are supposedly formed when chemicals react with radiation from Jupiter. Lineae: A result of the interaction of chemicals with radiation (Photo Credit : OceanicWanderer/Shutterstock)

Also, the radiation emissions may break down the H2O molecules of the ice crust to release oxygen and hydrogen. Thus, Europa may contain a tiny fraction of oxygen and a thin atmosphere. Additionally, the hydrothermal vents might also spurt out enough chemicals for life to flourish.

Given that all the ingredients are present, life has a very good potential to exist on Europa.

The hydrothermal vents and the ocean floor, where liquid water comes in contact with the warm rocky mantle, could harbor some extreme forms of life. Also, just like Antarctica, where extremophiles survive right under the ice sheets, life could exist beneath the icy crust of Europa too! The icy shell of Europa could also act as a shield and protect the interior from the deadly radiations of Jupiter.

All in all, Europa is a great candidate for the generation of life. However, by “life”, we do not mean “tech-savvy aliens” as is often shown in the movies. Even if we discover a single cell, it would be a titanic achievement.

All the speculations made above are supported by strong evidence from satellites and telescopes. However, it remains theoretical. To confirm the existence of an ocean or life forms, we must explore Europa. NASA’s Europa Clipper (2025) and ESA’s JUICE (JUpiter ICy moons Explorer) (2022) are upcoming missions destined to explore Jupiter and its icy moon. If we can discover life on Europa, it will be the biggest discovery in the history of humankind. Also, it will completely change our perception about life and the universe, and likely launch a new era of space exploration.