Infrared imaging allows JWST to view celestial objects that were previously hidden by thick clouds, and also presents the benefit of accounting for the redshift of light in space. Therefore, it enables us to look at old and distant stars and galaxies from the Early Universe.

JWST (also known as “Webb”), has provided us with a fresh perspective and a new method to view events from the distant past (around 13.5 billion years ago).

However, the modified eye that it provides does not possess the same mechanics as a human eye. Instead of observing the visible light spectrum (that humans can see), JWST prefers to view infrared light over other spectrums of light. Since the eye cannot see the majority of light released by celestial objects, referring to it as a “new eye” is appropriate, given its capabilities and breakthrough findings.

But what are the benefits of viewing the infrared range over longer wavelengths, such as microwave and radio-wave spectrums? Before answering this, it’s necessary to understand that different light spectra are just different wavelengths of energy produced by the same light source (see image below). When the wavelength is shorter, the energy the light carries is greater. That’s why we should avoid UV radiation emitted by the Sun! They are powerful wavelengths that can cause DNA damage.

Electromagnetic Spectrum; The wavelengths of energy produced by a source of light (Photo Credit: udaix/Shutterstock)

What are the Spectrums of light? And what do other telescopes use for imaging?

Six of the seven light spectrums are invisible to us. As a result, our eyes can only see a tiny percentage of any object that produces light—the “Visible light” wavelengths—ranging from 4྾10-7 to 7྾10-7. As depicted in the graphic above, radio waves have the longest wavelengths, gamma rays have the shortest wavelength, and infrared has a larger wavelength than visible light.

The name “infrared” is used because this range of light comes slightly below the wavelengths of visible red light, while wavelengths above the visible spectrum appear to be more Blue/Violet, thus the title “Ultraviolet.” So what do light spectrums have to do with telescopic images?

Telescopes use detectors and cameras to filter out different wavelengths, ensuring that only the desired wavelengths are gathered and electronically transformed for viewing. When compared to its predecessors, JWST has numerous sensitive detectors (including the Mid-Infrared Camera and Near-Infrared Camera) to see the complete spectrum of Infrared light and offer us sharper, more detailed photos of light coming from billions of light-years away.

On the other hand, the Hubble Space Telescope detects light in the visible spectrum, while the Spitzer Space Telescope observes light in a shorter range within the infrared spectrum. Additionally, the Chandra X-Ray Observatory views light in its X-ray spectrum. As a result, we can say that each telescope gives us various perspectives to observe the universe. What are the advantages of using infrared radiation in telescopes?

Since different wavelengths of light show distinct processes and events in space, using the infrared spectrum presents us with a different perspective and lens for our Universe. As a result, there are several reasons why infrared is favored over longer wavelengths, such as microwaves or radio waves. The ability of Infrared light to pass through dense and frigid clouds of dust and gas (as compared to other wavelengths), a phenomenon known as “Redshift”, and the relationship between wavelength and temperature are the three critical reasons for JWST to utilize infrared observation.

Infrared radiation has the unique ability to penetrate thick clouds of dust and gas that other wavelengths of light cannot pierce. When viewed via the Visible or UV ranges, these cold and dense clouds are opaque, since small dust particles inside can absorb the shorter wavelengths of light. Consequently, when these short wavelengths are utilized for imaging, it prevents light from objects behind or inside the clouds from being detected, and only the cloud’s glow is noticeable. This is inconvenient, since star-forming areas are found inside these clouds!

After being scanned with infrared light, the dust begins to lose its ability to cloak and obscure anything within and behind it. Therefore, JWST is capable of seeing through objects that previously appeared impenetrable, and it will eventually reveal the earliest stars and galaxies in our universe that were previously hidden. Webb’s (Infrared) and Hubble’s (Visible light) view of the Carina Nebula; there is more detail in Webb’s infrared image, since you can see the Star nursery within the nebula. (Photo Credit: Claudio Caridi/Shutterstock)

Redshift can be confusing

To begin with, one of the key goals of JWST is to examine some of the first stars, galaxies, and planets that emerged after the start of the universe. As a result, Webb must analyze areas of space that are unimaginably far away! As we look deeper into space, we are able to look further back into the past, due to the time that light takes to travel and reach us. From a cosmic standpoint, the speed of light might appear quite slow to astronomers!

The principle of redshift is introduced here, which can be puzzling at times, but let’s try to understand it now, since it is a significant physical phenomenon that occurs in light waves. In the 1920s, it was discovered that the Universe is expanding at an accelerating rate by none other than Edwin Hubble! He also observed that as we look further out in space, objects move away from us quicker due to the universe’s expansion, which causes redshift to occur.

As the universe expands, the light emitted by old and distant objects is stretched out to longer wavelengths. As a result, the light from the galaxies and stars in the early universe would have had their wavelength stretched out so much by the expanding space-time fabric that it is now mostly detected in the Infrared spectrum. This phenomenon of increasing/stretching light wavelengths towards the infrared spectrum is referred to as “redshift.” Therefore, Webb must view the ancient universe with infrared detectors, in order to see some of the oldest light that has “redshifted” over the course of 13.6-13.8 billion years!

Let’s consider thermal cameras for a moment. All of these cameras, like the JWST, contain infrared sensors. From airports to outer space, infrared radiation is the best at detecting even the faintest changes in temperature, making it simpler to grasp temperature-related concepts like luminosity, brightness, molecular composition, and so on. Contrary to common belief, many celestial objects, such as nebulae, planets, and old stars, are actually rather cold (as compared to bright stars). Above is a thermal (infrared) scan of a person’s hands. In these scans, blue regions are colder, while yellow/orange/red parts are warmer. We are conditioned to associate red with heat, but this is only true in thermal imaging, for conventional reasons. In the electromagnetic spectrum, bright blue is significantly hotter than glowing red! (Photo Credit: Cipta studio/Shutterstock)

We can detect infrared light to infer what is hidden by massive objects, such as clouds of dust, which are otherwise opaque in visible light. This is possible since the colder (less energetic) something is, the longer its wavelength will be. Light, brightness, and temperature have a direct connection that can be better noticed and understood when infrared radiation is employed, since the oldest stars and galaxies are colder and less energetic.

Stars that are younger and hotter radiate more visible light!

Understanding how infrared works allows us to recognize that it has more benefits than other wavelengths of light in terms of discovering the earliest structures in the universe. Furthermore, scientists will often combine data from “visible light” telescopes (Hubble) with infrared telescopes (such as JWST) to create a composite image. Data from each telescope is then merged to provide even more detailed images. So don’t worry, no one will ever forget what Hubble accomplished for us—and will continue to achieve. Fortunately, we now have more Cosmic Eyes than ever before! 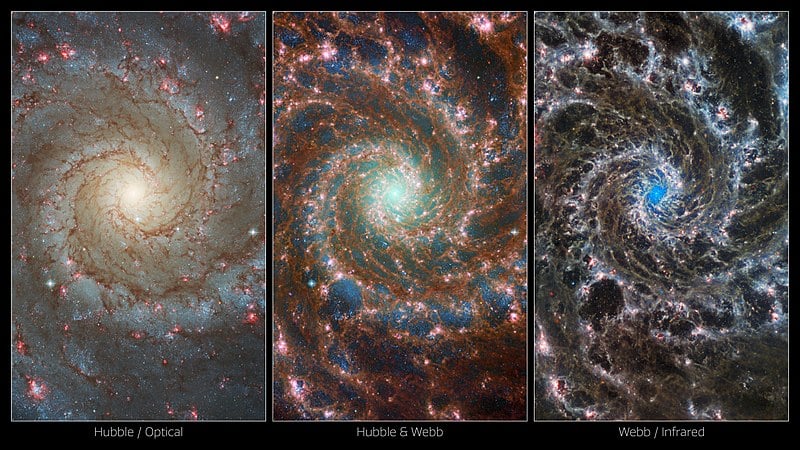 Pradyun is a Bachelor of Science (B.Sc) graduate of the University College Groningen in the Netherlands. Along with a desire to study and work in the Space Sciences (especially Astrobiology), he enjoys collecting Vinyl Records and discussing Music, Mythology, or Basketball. Unfortunately, he will continue to discuss these topics for nearly an hour.