Around the world, there are billions of people living within the “danger zone” for earthquakes, and as history has shown us (along with plenty of Hollywood renditions), earthquakes can be incredibly devastating. From toppling buildings and cracking open the surface of the earth itself, these natural phenomena are terrifying and unpredictable.

Nearly 240,000 miles away from our planet, our beloved moon wrestles with a similar problem, but obviously, they’re called moonquakes. Since no one lives on our lunar neighbor, moonquakes don’t get much attention, but they can be incredibly powerful, and last up to 20 times longer than earthquakes on Earth!

If we ever decide to colonize our nearest celestial companion, these quakes could prove to be quite a problem, so understanding them is crucial.

How Do We Know About Moonquakes?

Earthquakes on our planet come in one major variety, although the range of severity can be dramatic. They are caused by the shifting of tectonic plates, typically when a large chunk of that rock breaks, releasing the energy that has been building up over time. This releases seismic waves along the fault line (border between the massive tectonic plates), due to the rubbing and friction of the plates as they readjust and re-settle. Since the 1970s, tens of thousands of moonquakes have occurred on the surface of the moon.

How do we know that, since we haven’t been back to the moon since 1972? Well, on that fateful mission of Apollo 17, astronauts left seismometers at various landing locations on the moon, which can detect seismic activity with great precision on the lunar surface. These seismometers were only active for 5 years, shut down for budgetary reasons in 1977, but they recorded more than 12,000 quakes in that span of time! In comparison, there are about 20,000 earthquakes on Earth each year, but our planet is much larger, and many of those quakes are very weak and go completely undetected by humans; only sensitive instruments are able to detect them. (Note: sensitive instruments were not needed for the earthquake below….)

The 4 Types of Moonquakes

On the moon, there are four different types of moonquakes: deep moonquakes, shallow moonquakes, meteor impacts and thermal moonquakes.

Deep moonquakes happen extremely often, typically on a cycle of roughly 27 days, and occur nearly 700 km below the surface of the moon. Most believe that these are caused by the tidal pull of Earth on the moon. The moon may cause the tides of our oceans to move, but the Earth also acts on the moon in even more dramatic ways, literally cracking the deep rocky core of the moon!

Meteor Impacts can also cause moonquakes, and since there is no atmosphere on the moon, every small meteorite that is headed for the moon will strike it, rather than burning up in the atmosphere, as they do on Earth. These impacts cause rippling earthquakes that can be detected by those seismometers. 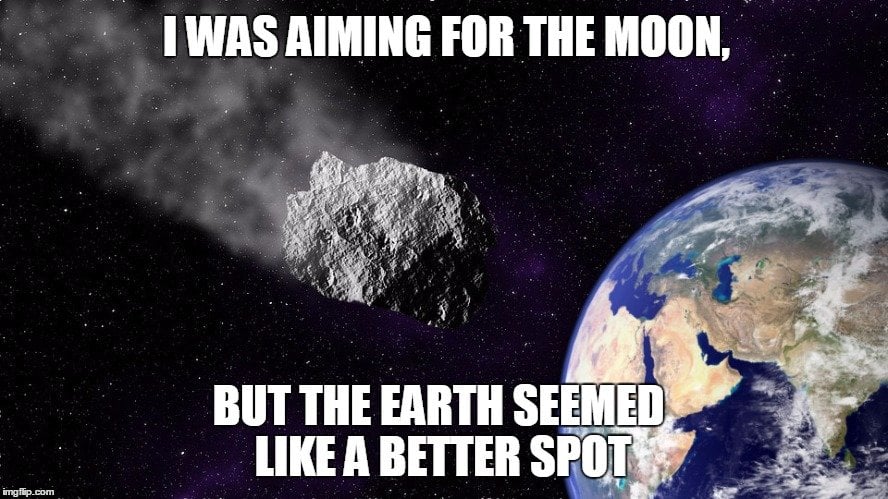 Thermal Moonquakes are perhaps the most interesting of the four, caused by the chance in temperature on the frigid surface of the moon. For two weeks at a time, half of the moon is enveloped in darkness, and the temperatures can fall to -240 degrees Fahrenheit. When that same surface makes its return to the sunshine, the temperature swings wildly back to +250 degrees Fahrenheit. When the frozen crust suddenly expands, it can cause a moonquake.

Shallow Moonquakes are the most powerful and the most worrisome for researchers and those eager to colonize the moon. Of the four types of quakes, these are the ones that could do some real damage. The exact cause of these shallow quakes is unknown, but they can reach a magnitude of 5.5 on the Richter scale and occurred 28 times between 1972 and 1977. The thing is, the moon is a “one-plate” celestial body, much like Mars, and lacks active tectonic plates.

Scientists posit that these shallow moonquakes may be caused by the collapsing rims of large, relatively recent craters (caused by meteor impacts), which send long reverberations throughout the surrounding areas. To put these shallow moonquakes into perspective, a 5.5 on the Richter scale is enough to crack plaster and move buildings, which could be potentially deadly for any permanent settlements on the moon, particularly since any crack in the oxygen seal could be catastrophic for a future colony.

How Long Do Moonquakes Last?

Quakes on our planet tend to last between 10 and 30 seconds, and some may last up to two minutes. The longest ever recorded on the planet was nearly ten minutes, but that is extremely rare. Moonquakes don’t seem to have such strict schedules, and on average, they last far longer than quakes on Earth.

When the tectonic plates rumble and an earthquake occurs, the huge amount of energy spreads out through the mineral-rich crust of the earth, which has largely been infiltrated by water in the stone. In effect, this makes the material slightly more compressible, and able to absorb energy and seismic waves, diminishing the power and slowing the shaking. Even so, they can still be scary – and unexpected!

On the moon, things are very different, as the entire ball is hardened, rigid and dry. When a tremor rocks the surface of the moon, it resonates powerfully, without anywhere to naturally dissipate. It isn’t uncommon for a moonquake to last for ten minutes or more, and for smaller trembling to continue for hours afterwards.

Moonquakes and the Future

Although this is still years away, a lunar colony would need to consider the potentially devastating effects of moonquakes on the structures and inhabitants. At present, all of the seismometers were placed in a rather small area near the Apollo landing site. Very little is known about the moonquake activity near the lunar poles, or whether there are certain areas of the moon where moonquakes are less common.

In the coming years, NASA plans to land a dozen more seismometer sensors on more disparate parts of the moon to learn more about the frequency and severity of these quakes. Without more information, lunar colonists could be in for an even more dangerous and stressful experience if they choose to settle in a moonquake-prone region!