The blood moon, the pink moon, the harvest moon and the blue moon… all of these are the super moons named not for their color, but for other far more intriguing reasons.

However, if the moon almost always appears white, then why the names: “pink moon”, “blue moon”, and “blood moon”?

Among the vast array of celestial bodies we like to study and learn about, the moon still happens to be our favorite!

Interesting fact: ours is the only moon that is not named something other than “moon”. Every other planet’s moon has been given a specific name.

The full moon and the super moon

A full moon occurs when the moon’s surface facing the earth is wholly lit up by the light rays from the sun. After all, it’s the sun that provides the moon with the changing shape in which we see it. Full moons repeat themselves every 29.5 days. 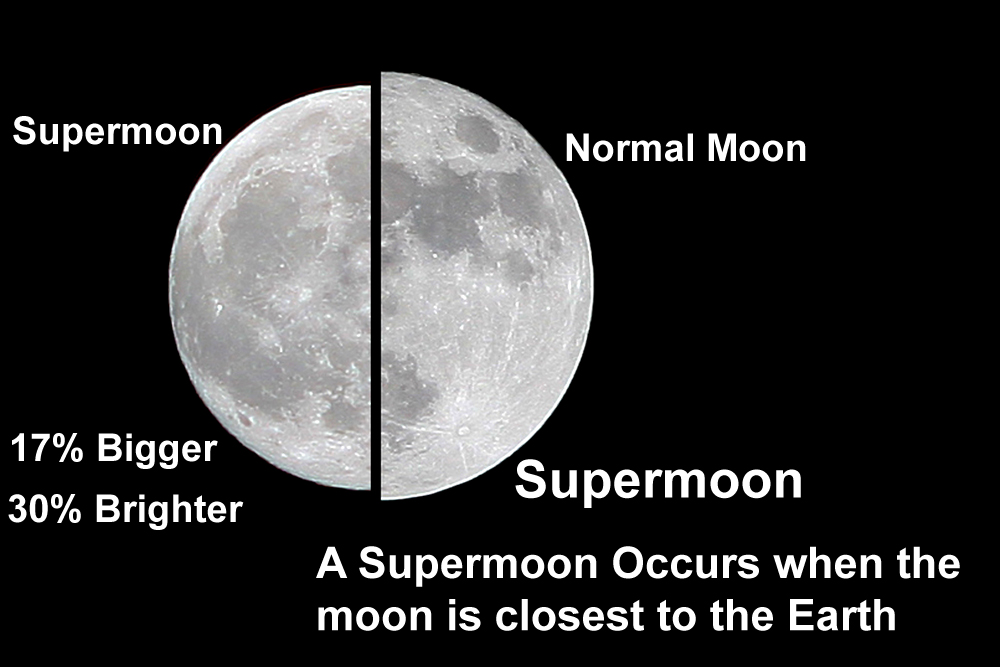 Super moons are larger and brighter than usual full moons.

A super moon, on the other hand, as the name suggests, is even larger than a full moon. On average, super moons are about 17% bigger and about 30% brighter than the faintest moon of the year.

Although these numerical figures sound significant, it’s practically impossible to detect the difference between a regular full moon and the super moon unless they are placed adjacent against a night sky background.

The scientific cause behind a super moon is that this moon is at the closest point to the Earth in its orbit. This closest point on the orbit is called a perigee. Likewise, the farthest point is called the apogee. Fun fact: these super moons can cause higher than usual tides too!

What is a lunar eclipse?

A lunar eclipse is a celestial phenomenon wherein the moon, the earth and the sun align themselves in a way that the earth ends up masking some of the sun’s rays being directed at the full moon. However, the earth’s atmosphere, being the “nice guy” in the picture, does allow some of the rays reflected from it to head on towards the moon. This makes the moon glow slightly with different hues. 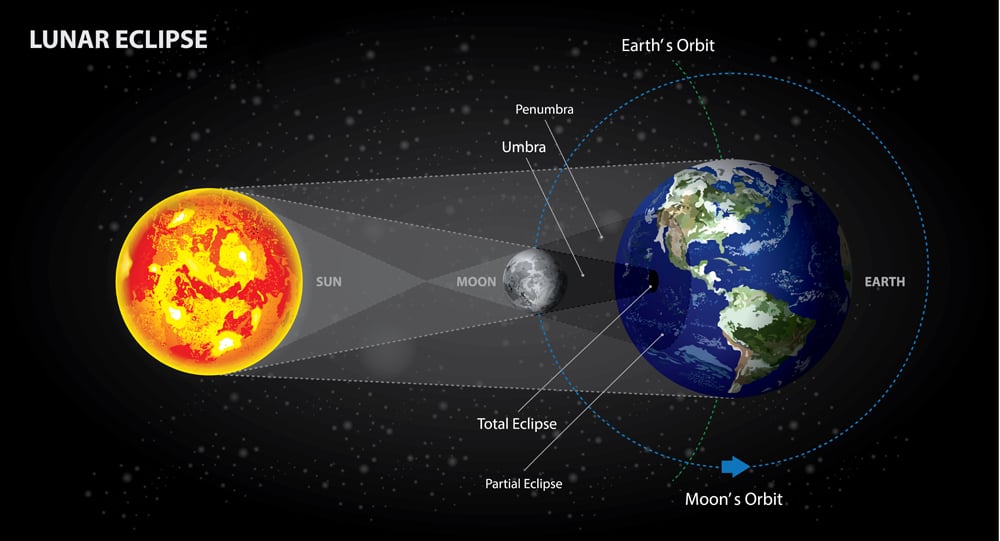 The Earth masks the Sun’s rays towards the moon during a lunar eclipse. (Photo Credit : Natee Jitthammachai/Shutterstock)

The name of this moon is based on its reddish-orange hues when it glows during a total lunar eclipse. The earth lines up between the moon and the sun, depriving the moon of any direct sunlight. 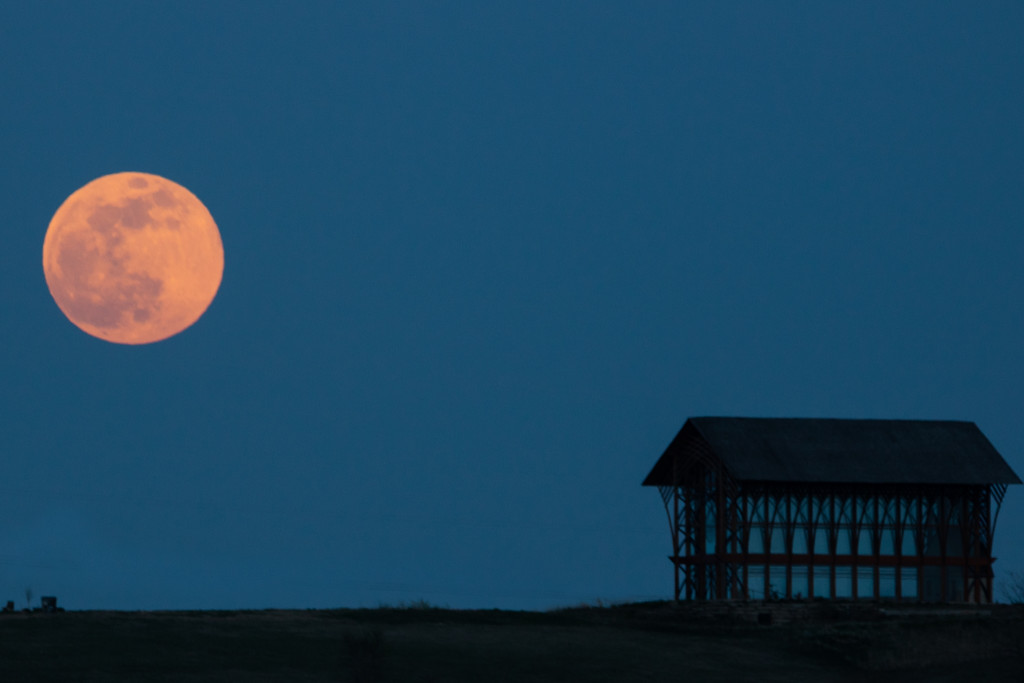 Interestingly, the name “blood moon” is sometimes used for an autumn moon that appears brownish because of dust, smoke or haze in the sky. The intensity of the red color depends on pollution, cloud cover, or even debris present in the atmosphere.

For example, if an eclipse takes place shortly after a volcanic eruption, the particles in the atmosphere will make the moon look dimmer than usual.

Just as a blood moon is not really covered in blood, a blue moon is also not blue. This moon is considered special because it is the “extra” Moon in a season with four full moons. This usually occurs once every two-and-a-half years.

This might explain its name, right? The sight is so unusual that we tagged an English idiom with the same meaning—a rare event!

However, there is another explanation: When the famous volcano Krakatoa exploded in 1883, a huge amount of dust and ash was released into the atmosphere. This atmosphere filtered out some of the wavelengths of sunlight, causing unusual skies, including a moon with a tinge of blue! 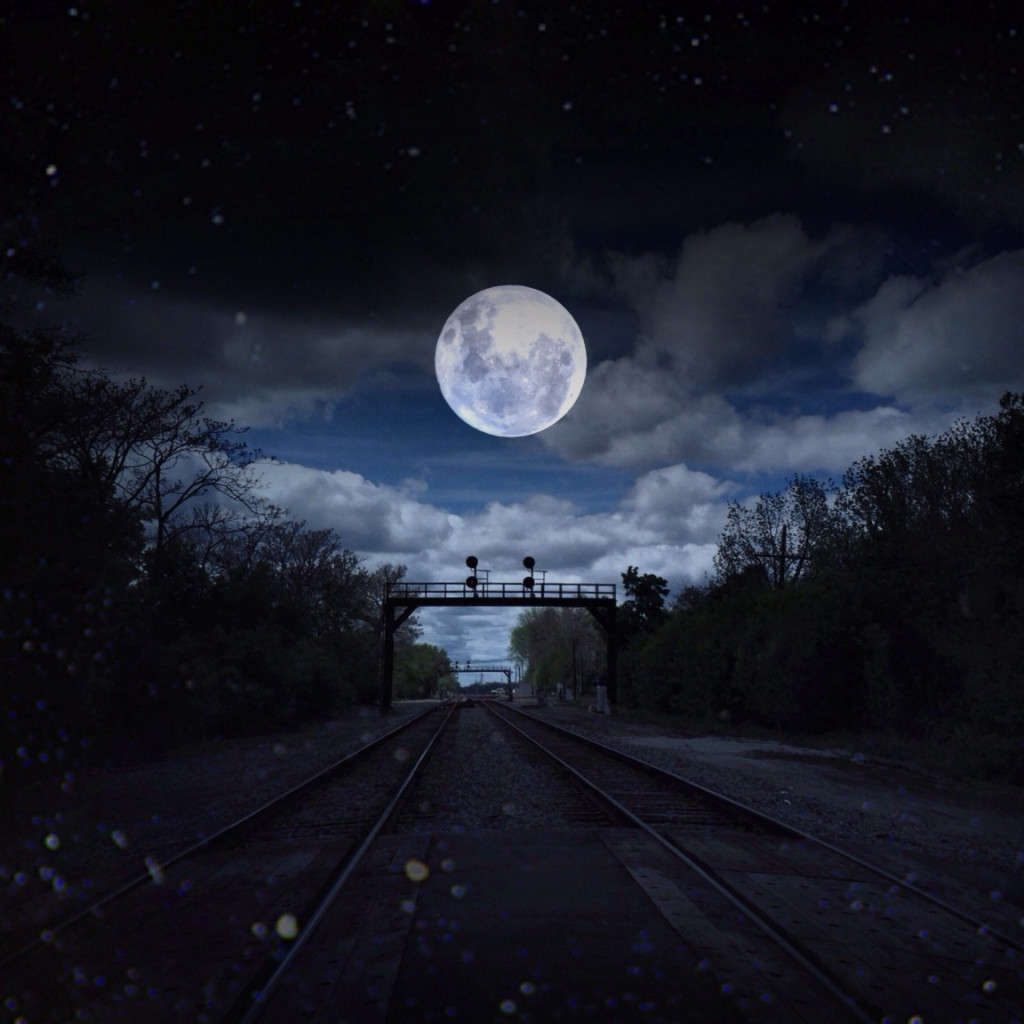 The 19th century definition from the Maine Farmer’s Almanac states that “a blue Moon is the third Full Moon in a season that has four Full Moons.”

Therefore, it can also be referred to as a “seasonal” blue Moon. An astronomical season is the duration from equinox to solstice and vice versa. One astronomical season has three full moons, but sometimes, there might also be a fourth one. This fourth moon is what many people call a blue moon.

Another way to describe it is that the phases of the moon take 29.5 days to complete. This implies 354 days for 12 full cycles of the moon to occur. Something sounds fishy… doesn’t it? A year is 365/366 days long, so how do we account for this lack of 11/12 days? Blue moon to the rescue! Therefore, every two and a half years a 13th full moon is seen, and is named a blue moon. 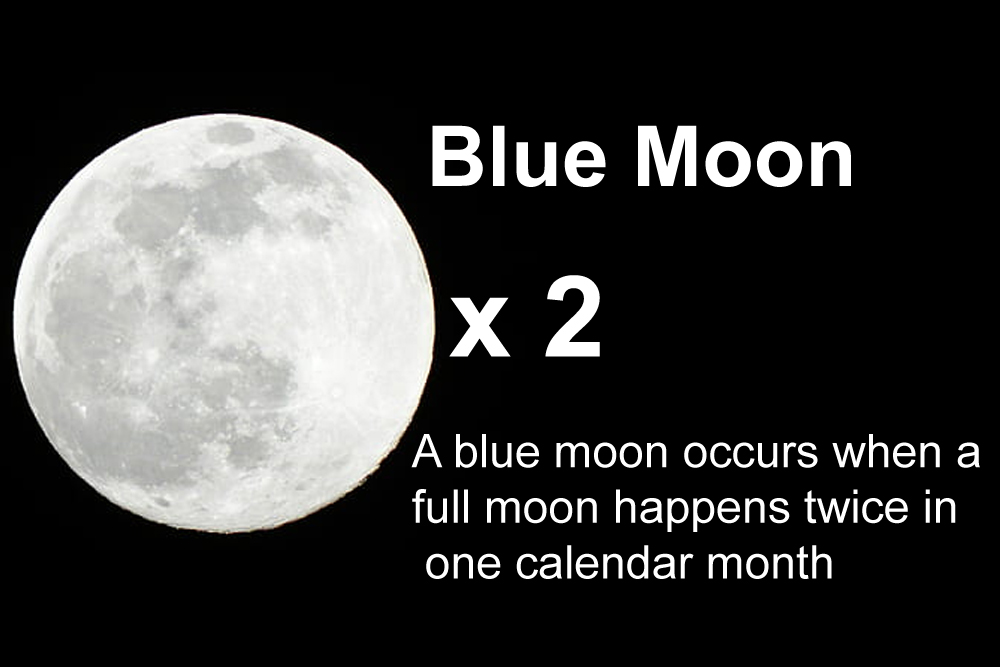 A blue moon is a type of super moon occurring at more than the usual frequency.

You know it’s autumn when the leaves begin to fall. As the autumn draws closer, so does the legendary Harvest moon. Equinox is the name given to the event when the earth’s equator is more or less directly in line with the center of the sun. An equinox takes place twice in a year; once during late March—called the spring Equinox—and once around the late September—called the autumnal equinox.

The Harvest Moon is the name given to the full, bright moon that appears closest to the autumn equinox. The name, however, dates back to a time before electricity. The farmers used to depend upon the phases of moon for harvesting their crops late at night. This big, full moon near the autumn season was their cue to harvest the crops under this moonlight as it flooded their fields with illumination. 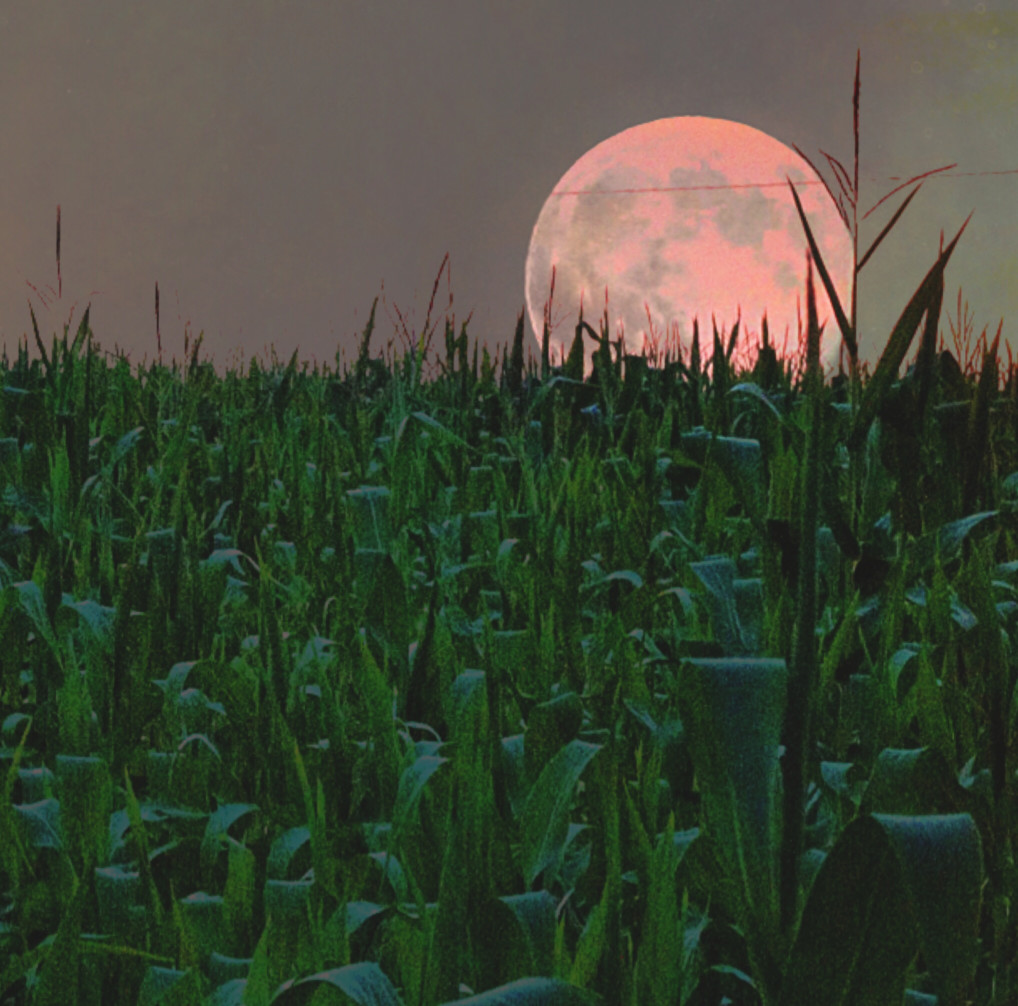 The name could also have originated in England, again for the same reasons. The harvest moon is the full moon close to the harvesting season, which rises early and sets late! Interestingly, even the degree of retardation of the moon’s rising affects the phenomenon of an early moonrise.

Moreover, a difference in latitudes seems to affect this retardation. Since England has favorable conditions, the full moonrise at harvest time occurs earlier than in lower latitudes.

As is becoming a pattern, this moon does not possess any shade of pink, but it does rise in the month of April. So then… why the mention of ‘pink’ in its name?

The Maine Farmer’s Almanac began publishing American Indian Moon names for the months of the year. The publishing mentions that the ‘pink’ in the name is actually a tribute to the pink-colored wild flowers that grow in spring around this time. An herb called moss pink is native to the Eastern United States.

Other names for moss pink include grass pink, wild ground phlox, creeping phlox, mountain phlox, or even just moss phlox. Phlox subulata is the scientific name of this moss, in case you’re fascinated enough to search for some beautiful pictures! 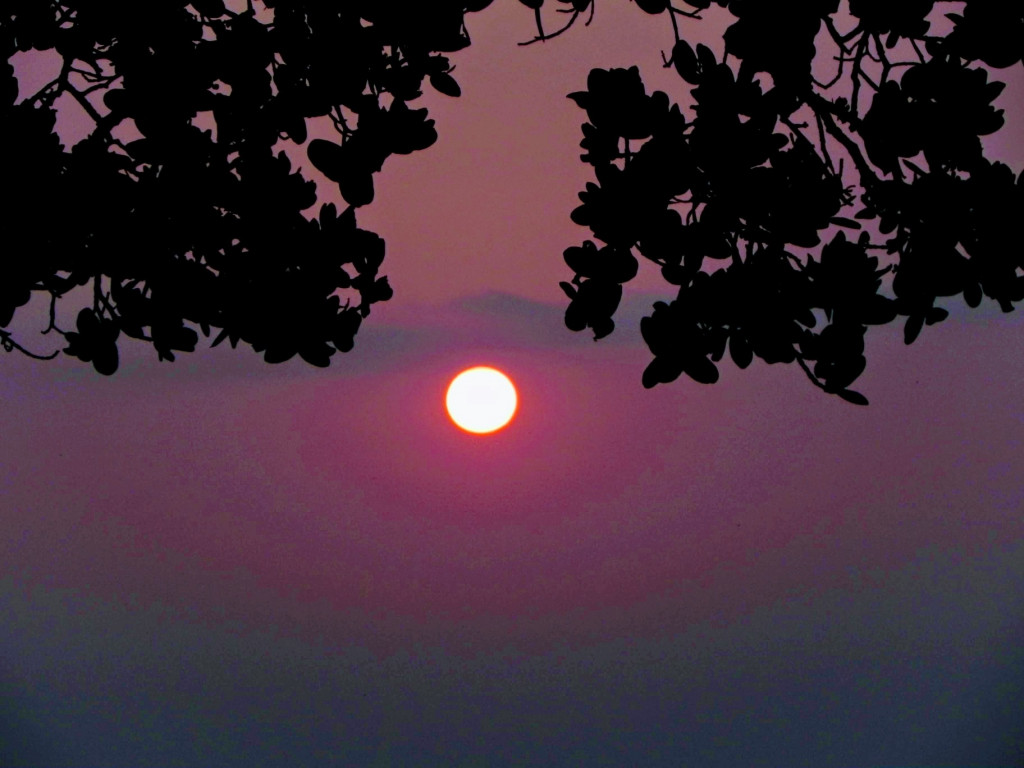 A Super Moon may appear a little pinkish due to pollution. (Photo Credit : twenty20)

However, there is one circumstance where you can be lucky (or unlucky) enough to actually see the moon take on a different hue. Australian astrophysicist Professor Jonti Horner says that if you are somewhere that has a high concentration of pollution in the air, then sure, it might take on a reddish or pink tinge.

Yes, the moon taking on different shades at varied times might have sounded fun, but we can’t really expect too much from our little natural satellite… after all, it doesn’t even have its own light to begin with. However, the idea of super moons and the images captured by photographers around the world remain striking and staggering in their beauty!