Ceres is the largest celestial body in the asteroid belt between Mars and Jupiter; it is also the only dwarf planet in the inner solar system.

The space between Mars and Jupiter is peculiar; it is inhabited by a large swath of asteroids, dwarf planets and other celestial objects. This ring of celestial bodies is called the Asteroid Belt and consists of about 1.1 – 1.7 million celestial bodies with a diameter of more than 1 km. Surprisingly, the total mass of all bodies in the asteroid belt is only 4% compared to the moon’s mass. 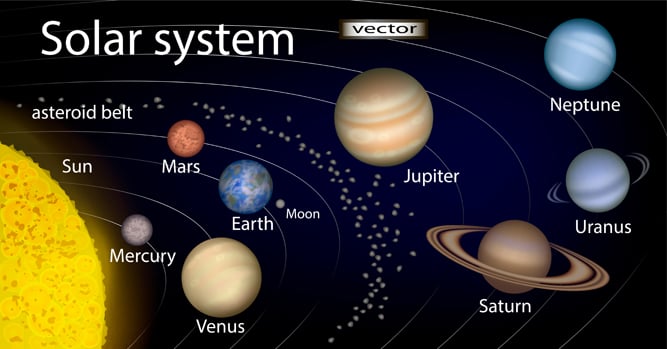 The largest body in this belt is also the only dwarf planet lying within the orbit of Neptune—a dwarf planet named Ceres. Recent missions by NASA have made it possible to learn a lot more about this rocky dwarf, a celestial body that was once considered to be a legitimate solar system planet.

The first theorization of this planet lying between the orbits of Mars and Jupiter dates back to 1772 by Johann Elert Bode, but it wasn’t until 1801 that the Italian Catholic priest Giuseppe Piazzi formally discovered Ceres. Initially, Piazzi theorized the discovery as a comet, but later realized that the object could be something much bigger as the movement was slow and uniform.

Due to an illness, however, the position of the newly discovered celestial body was lost to Piazzi and Ceres had orbited itself in front of the Sun, which made its rediscovery quite difficult. An efficient method was devised by Carl Friedrich Gauss, a German mathematician in correspondence with Piazzi, to track it down again; Ceres was recovered in a matter of weeks.

Ceres gets its name from the Roman Goddess of Agriculture – Cerere, a name proposed by Piazzi himself. Ceres has seen itself categorized into various classes of celestial objects from time to time, as it was initially categorized as a planet. During the 1860s, the difference between asteroids and planets was accepted, and Ceres was dethroned from its planetary throne.

It wasn’t until 2006 that Ceres earned the title it still holds today—a ‘dwarf planet’. Suggested by the International Astronomical Union, new guidelines for what constitutes a ‘planet’ were passed. This criterion requires a celestial body to be the following to be considered a planet:

Although Ceres clears the first two criteria, it fails to clear its orbit and is not the dominant body, as it shares the orbit with many other asteroids. This makes Ceres fall into the second category, as a dwarf planet. Ceres shares this category with other famous dwarfs in our solar system, including Pluto, Eris, Makemake, Haumea, etc. 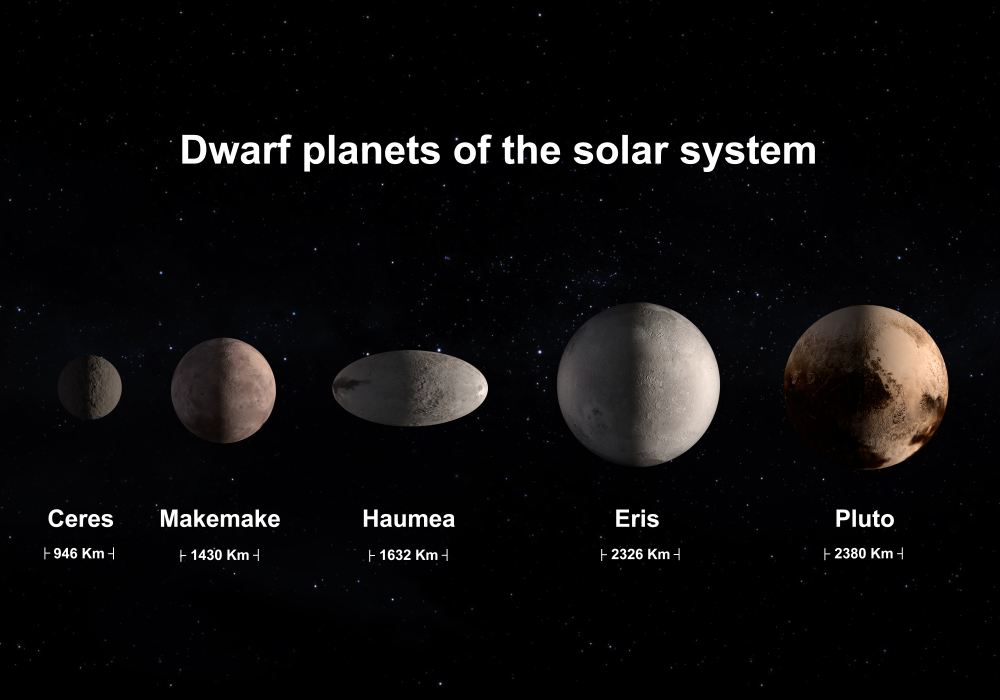 Characteristics And Formation Of Ceres

Ceres is one of the most water-rich celestial objects in the inner solar system, coming in second only to Earth. Ceres has a radius of around 296 miles (476 km) and water is available in large quantities. It is quite small; for example, if Earth were the size of a nickel, Ceres would be a small poppy seed. Ceres is 2.8 AU (Astronomical Units, 1AU = distance of the Earth from the Sun) and light takes 22 minutes to travel from the Sun to the surface of the dwarf. It takes 1,682 Earth days to complete its orbit around the Sun, which is roughly 4.6 Earth years. However, the length of its day is much shorter than Earth, as it completes one rotation in just 9 hours. Ceres has no moons orbiting it and also exists without any rings. 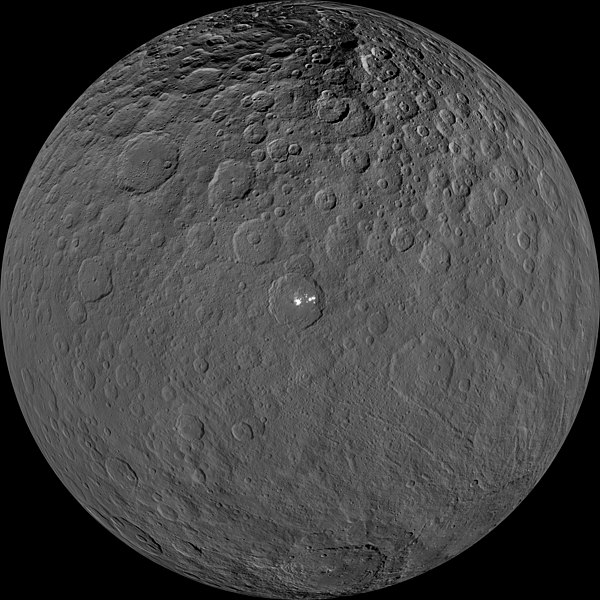 Ceres originated with the rest of the Solar system sometime around 4.5 billion years ago, and is likely to have been formed and then migrated in from the giant planar orbits of Jupiter and Saturn; it finally reached the asteroid belt around 4 billion years ago. It is called an “embryonic planet” because it didn’t quite finish its formation. This formation was prevented by the massive gravity exerted by Jupiter at the time of its origination. Ceres has an icy mantle and a solid core with as much as 25% of its composition being water.

The Dawn space mission was intended to explore the asteroid belt and visit the two biggest celestial objects of that region, Vesta and Ceres. The satellite was launched in 2007, capturing Vesta and subsequently Ceres as it entered the dwarf planet’s first observational orbit at an altitude of 13,500 km from the surface on April 23, 2015.

Dawn provided in-depth information about the planet as it orbited Ceres from February 1, 2015 to October 6, 2018. It orbited the planet at various altitudes, exploring all the craters, formations and poles of the dwarf planet.

The atmosphere of Ceres is very thin and contains evidence of water vapor within it. This is likely due to vapor production by ice volcanoes or the sublimation (transition from solid to gas without going through a liquid phase) of surface ice. Ceres doesn’t have a magnetic field

The surface of Ceres is covered with countless craters, but they are relatively small. The craters are no larger than 175 miles (280 km) wide, which is odd, as the planet is housed in the asteroid belt and would have been hit by many large celestial objects over its 4.5 billion years of existence. This relative lack of impact damage might be due to the icy terrain below the surface, as it would have evened out the large depressions, or perhaps ice volcanoes removed or covered up the craters created by large asteroids. 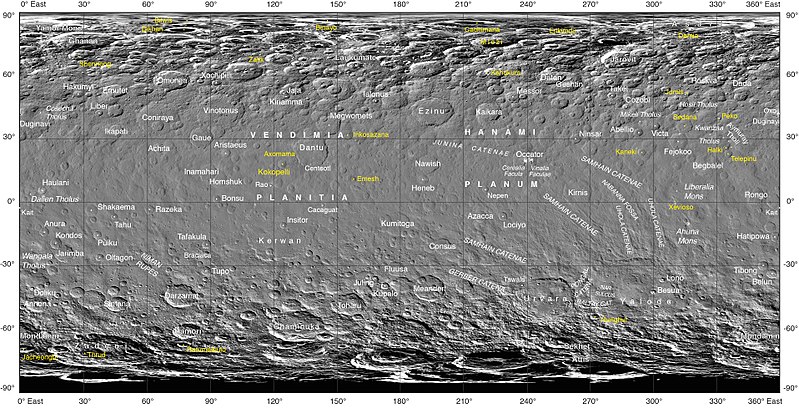 The crust of Ceres is rocky with large deposits of salt, but these are unlike regular table salt (sodium chloride); they instead comprise more unique minerals like magnesium sulfate.

Also Read: What Are Dwarf Planets?

Exploration For Life At Ceres

Ceres is a peculiar hunting ground for life in space, as it contains huge amounts of water, which would be essential for life to evolve, based on what we know of Earth-based life. With a mix of water and a few other ingredients, it is possible for Ceres to have harbored life, although the conditions on Ceres would likely only be habitable for small microbes.

Future ground missions to Ceres would provide a much better understanding of the possibility for life on this icy dwarf!