An innovative Heat Shield, advanced Sensors, and an efficient Cooling System helped the Parker Solar Probe stay cool as it approached one of the most hostile environments of the solar system.

On April 28, 2021, NASA’s Parker Solar Probe became the first-ever spacecraft to ‘touch’ the sun by plummeting into the depths of the solar atmosphere. NASA confirmed later, on December 14, 2021, that the probe had approached the sun and sampled particles, and measured magnetic fields in the process. The whole world welcomed the news with admiration and astonishment.

However, the initial excitement and wonder in everyone’s mind was soon replaced by a curious question; How did a spacecraft even manage to get anywhere near the sun without melting under its extreme temperature?

NASA launched the Parker Solar Probe on August 12, 2018, in an effort to unravel the secrets of the sun. The mission aimed at studying the sun, its atmosphere, and the solar winds. This stellar endeavor was revolutionary and one of a kind for many reasons. 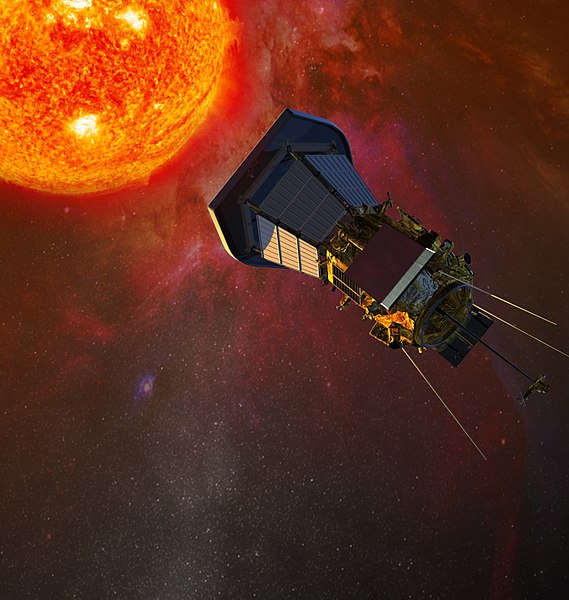 The Parker Solar Probe reached as close as 11 million km above the surface of the sun (Photo Credit : Wikimedia commons)

The Parker Solar Probe marks humanity’s first journey to a star. No other spacecraft has ever reached this close to our sun, let alone a star of another solar system! With a mass of 735 kg, and only about the size of a small car, it is one of the lightest, yet also one of the most powerful spacecrafts in NASA history.

The probe is also the fastest human-made object ever, with the ability to achieve a speed of almost 692,000 km/h. Moreover, the Parker Solar Probe is the first NASA spacecraft to be named after a living person—the astrophysicist Dr. Eugene Parker, who in 1958 predicted the existence of solar winds.

After numerous orbits and multiple close approaches, the probe finally ‘touched’ the sun, but what does it mean to touch the sun? To figure that out, let’s first take a look at the structure of the sun.

The trajectory of the Probe (Photo Credit : Philipp Hienstorfer/Wikimedia commons)

What Does It Mean To ‘Touch The Sun’?

It is impossible to land a spacecraft on the surface of the sun because, unlike most of the planets, the sun doesn’t have a solid surface. Our sun is essentially a sphere of superheated gases and plasma held together by gravity. The sun consists of seven layers; 3 inner and 4 outer layers. 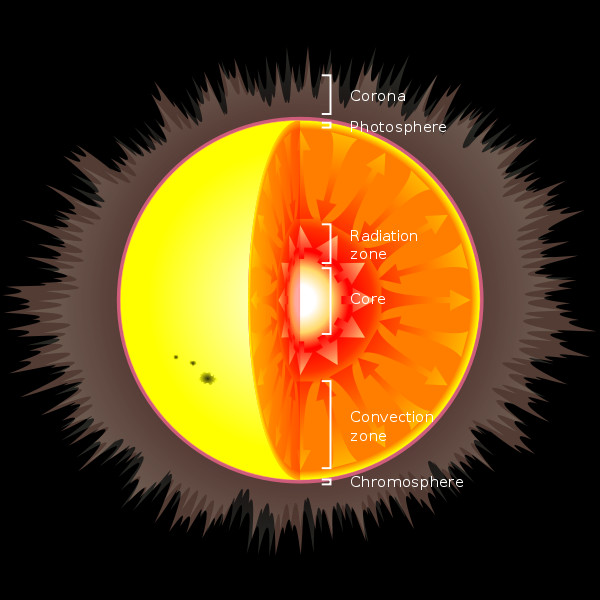 The outer layers of the sun are the photosphere, the chromosphere, the transition region and the corona. The photosphere is known as the surface of the sun. This is the layer which we ‘see’ when we look at the sun, and it forms a boundary between the inner layers and the solar atmosphere.

The chromosphere, the transition layer, and the corona form the solar atmosphere. The corona is the outermost layer of the solar atmosphere and is visible during a solar eclipse. This layer looks spiky and irregular, somewhat like a crown. Therefore, it is named after the Latin word for crown—Corona. 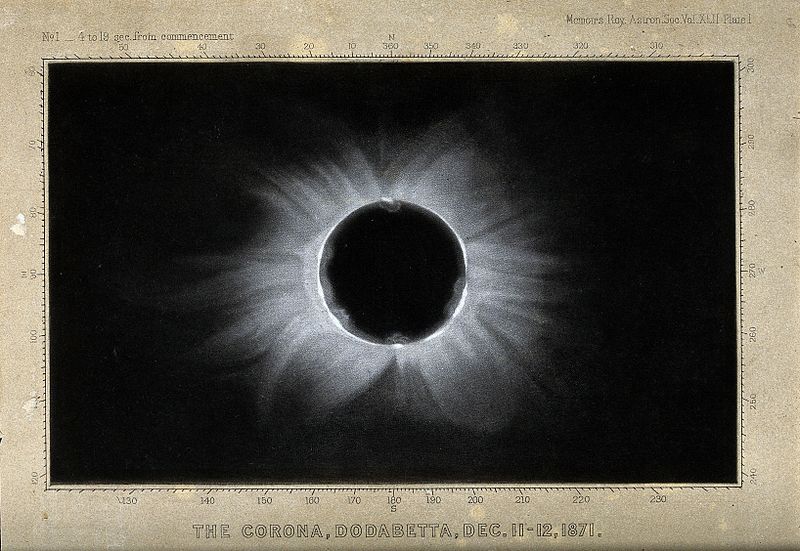 Among these layers, the Parker Probe has made it into the solar corona. So, when we say that the probe has touched the sun, what we mean is that it has flown into the corona.

The corona has always been a mystery to scientists because it is almost 300 times hotter than the surface of the sun, despite being much less dense. Scientists have been baffled by this heating anomaly of the corona, and believe that the Parker Solar Probe could provide some insight into the science behind this mystery.

Now, let’s dive into the real question… How did the probe make it so far without melting?

Why Doesn’t The Probe Melt?

The Parker Solar Probe is a marvel of engineering and technology. It made use of advanced science and cutting-edge technology to survive the deadly stellar environment.

The sun itself is one of the factors keeping the probe safe. To understand this, let’s clarify what heat and temperature exactly are.

Also Read: Lightsail: How A New Propulsion Technology Will Send You To Mars In 3 Days

For example, consider a burning matchstick and a cup of hot coffee. The matchstick has a higher temperature because the burning particles have high kinetic energy, but the hot coffee has more heat, as there are far more particles in a cup of coffee, which makes the total energy from all the particles much higher than that of a matchstick.

To sum up, just because something has a high temperature doesn’t necessarily mean that it has high heat energy. Heat transferred depends on the amount and density of particles in the system.

It is a similar case with the sun. The corona has a very high temperature, since the particles have high kinetic energy. However, the corona also has low density, as high-temperature particles scatter over a large area. So comparatively, only a few particles from the sun will interact with the probe, which drastically reduces the risk of heat damage.

So, even if the corona has a temperature of 1 million degrees Celsius, it will only heat the probe to about 1400oC.

Just as we use an umbrella to protect ourselves from the sun, the probe makes use of an advanced heat shield called the Thermal Protection System (TPS), which is a 2.5-meter wide, 11.5 cm thick carbon shield that shelters the spacecraft from the sun.

The heat shield is made of a lightweight carbon foam core sandwiched between two panels of superheated carbon-carbon composite. The sun-facing surface of the shield is additionally painted with a special white coating that reflects most of the sunlight falling on it. 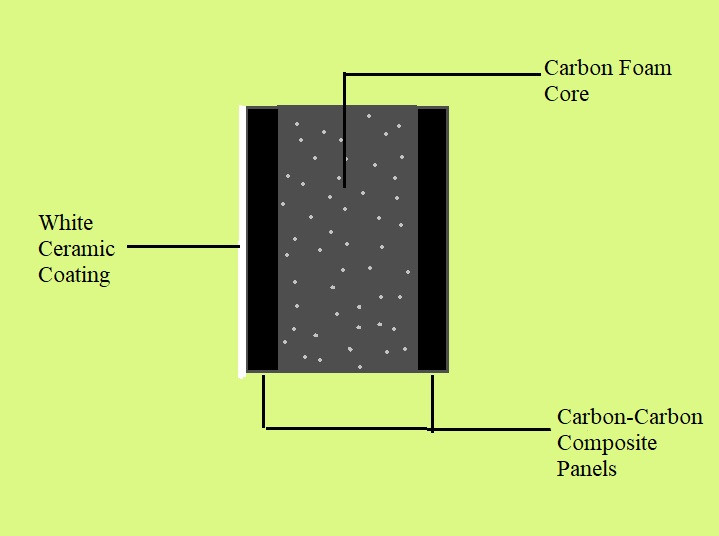 Structure of the Heat Shield

The carbon-carbon composite consists of carbon fibers embedded in a carbon matrix. This is one of the best materials to be used as a heat shield due to its light weight, high-temperature resistance, and structural stability. The foam core is almost 97% air and acts as a good insulator of heat. Thus, the TPS can withstand temperatures of up to 1650oC.

This video by NASA demonstrates the efficiency of the heat shield: https://youtu.be/BKinVmBoIrE

Within the corona, the sun-facing panel can heat up to 1400oC and still keep the back panel at around 315oC, while the spacecraft itself exists at a balmy temperature of 30oC.

Since most of the probe is behind the heat shield, even a slight misalignment can expose the entire spacecraft to the heat of the sun. In such a case, it is impossible to control the orientation of the probe from the earth, as it takes a lot of time. In short, out there, the probe is on its own.

Thus, the probe has a built-in mechanism to detect its own alignment with the sun. Seven solar sensors are placed along the edges of the spacecraft. When any of these sensors detect sunlight, they warn the central computer, and the spacecraft realigns its position. This way, the instruments remain safe from the hostile solar environment.

Even though most of the spacecraft is hidden behind the heat shield, there are a few parts that stick out bravely and expose themselves to the deadly radiation of the sun. These parts were built specifically to withstand all the heat and particle emissions they would undergo.

One of the most important parts of the probe is the Solar Probe Cup or the Faraday Cup. This cup faces the sun directly, to collect and detect the high-energy particles that come gusting towards it. The cup is made of a molybdenum alloy with a very high melting point (2,349oC) and its electrical grids are made of tungsten, the metal with the highest melting point (3,422oC).

Furthermore, to ensure that the electrical wiring of the instrument doesn’t melt, they are made of niobium and suspended in sapphire crystal tubes.

Obviously, the best source of energy to power a spacecraft flying towards the sun is solar energy itself! However, too much solar energy can also be a bane. An immense amount of sunlight can overheat and damage the solar panels within the spacecraft. To prevent this, the solar panels are designed in such a manner to retract and expose only a part of their surface to the sunlight during close approaches. This prevented the over-absorption of sunlight, while still providing ample energy to power the spacecraft. 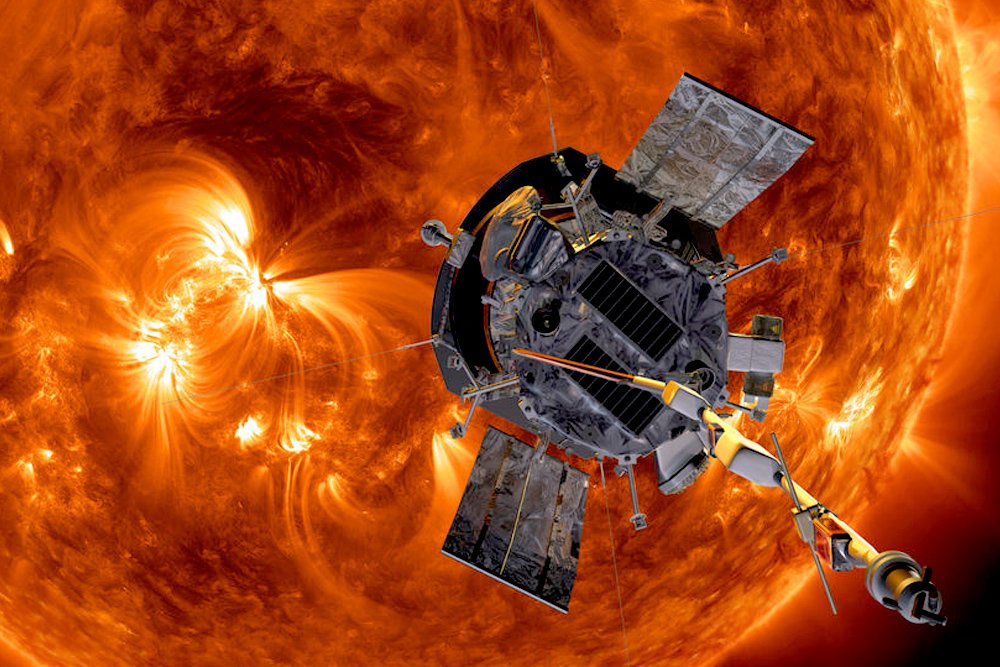 The solar panels are also cooled using a simple cooling mechanism. The spacecraft makes use of a water-cooled solar array cooling system. The probe uses about 3.6 liters of water to cool down the solar arrays. The water flows through small channels embedded in the solar panels and then absorbs the excess heat. The hot water then flows into four radiators where the heat is radiated off into space. This keeps the solar arrays cool enough to function efficiently.

This is how the Parker Solar Probe keeps its cool, even when it’s heading straight for the sun!

The Parker Solar Probe is a culmination of decades of research and development. The success of the mission is a monumental achievement for science and humanity. The mission is designed to have 24 close approaches with the sun within its estimated lifespan of seven years (2018- 2025). With its adept cooling system, the probe will delve into unexplored expanses of the sun and unfold new mysteries of the universe!