Researchers are experimenting with algae as a sustainable fuel source, such as in the form of biofuel, and answering questions of how it could improve our medicinal approaches to certain problems.

Algae are some of the oldest living things on the planet. Cyanobacteria, or blue-green algae, uses sunlight to make energy. This process is commonly called photosynthesis and it all began with these revolutionary algae. But how can these age-old creatures help us in the future? Algae have a massively untapped potential that could help us generate energy, act as medicine, and even work as a source of nutrition. Before we get into all that, let’s take a look a closer look at algae themselves.

Algae refer to a large group of organisms that are actually, genetically speaking, quite unrelated. They were also the first organisms to photosynthesize. Some look like advanced plants, with leaf-like structures attached to a stem; most algae, however, are microscopic. It is these microalgae that could be very helpful in the future, but first, let’s investigate how algae are helpful to us right now. 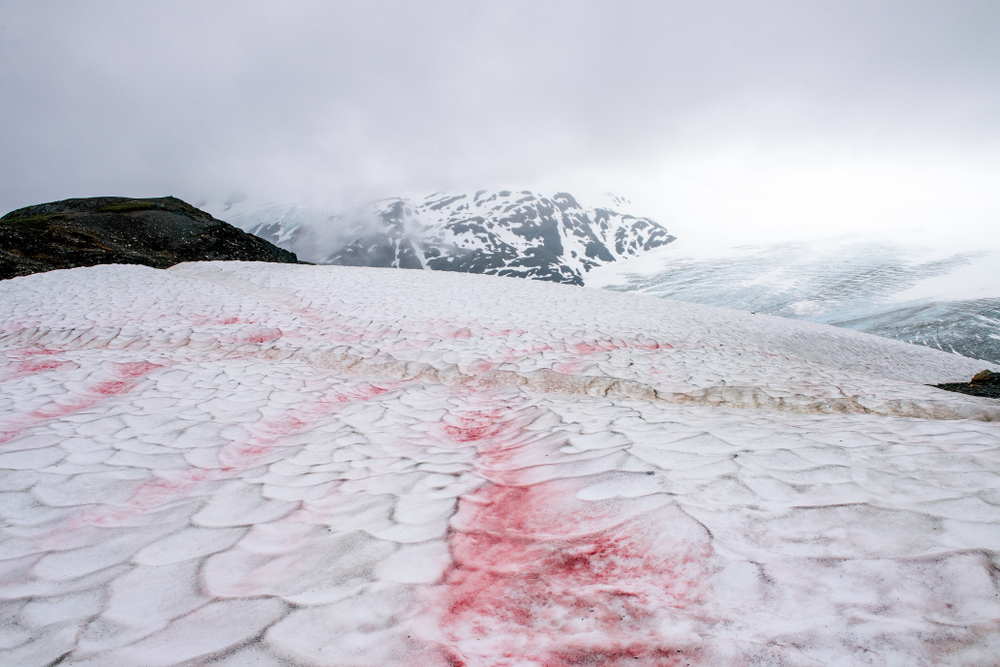 Pink snow or watermelon snow is a phenomenon where algae grow in the snow, making it turn pink! (Photo Credit : Dene’ Miles/Shutterstock)

How we use algae today

Besides giving the world about 70% of its oxygen, algae have been an important food source to humans for generations. The food and beverage industry uses algae in many ways, from simple things like sushi, all the way to making butter! Also, we’re doing research on its use in the pharmaceutical industry to synthesize various bioactive compounds, which can help with health and nutrition.

Today, we are on the cusp of great innovation. Algae is no longer used just as food. Algae is now being recognized for its potential—as a tool for creation!

Plants are the primary food source in any food chain, and are always the base of the chain. This means that they make the base ingredients for everything above them. Importantly, they can make those base ingredients (carbohydrates, vitamins, fats) from scratch. Scientists are trying to tap into this ability to create different materials for various purposes.

We extract fossil fuels from non-renewable sources. This means that fossil fuels will eventually run out on this planet. Moreover, fossil fuels release catastrophically high levels of carbon dioxide into the atmosphere.

Biofuels can be produced and are therefore renewable, meaning that we are unlikely to ever face a biofuel shortage. Moreover, these fuels don’t release any extra CO2 into the atmosphere.

Biodiesel has generally been composed of vegetable oils, but recent research and development has led to the production of fuel from Algae as well. When the oils (lipids) in algae undergo chemical reactions, they form biodiesel. 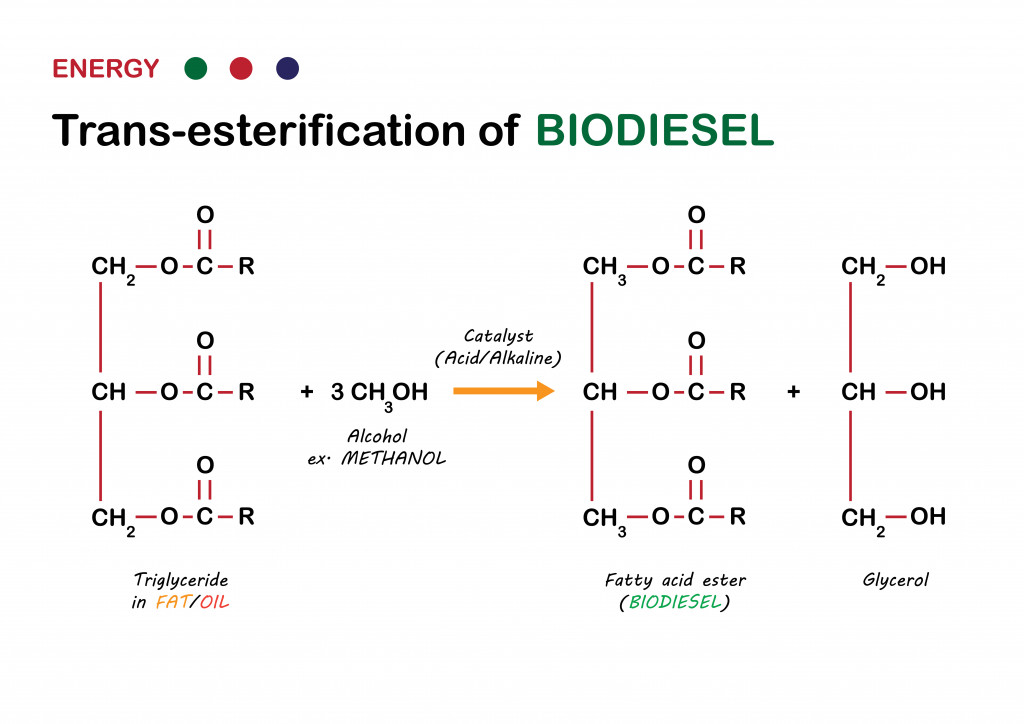 The process by which fats/oils are turned into biodiesel (Photo Credit : BigBearCamera/Shutterstock)

Biodiesel and biofuels can be used in regular engines with minor modifications. This would help provide an alternative for energy production for electricity, which is also primarily dependent on fossil fuels.

Since all developed countries already have major systems in place for energy production, this would prevent them from having to rebuild from scratch. This would make the transition period to other, even greener renewable energies (solar, wind, water, hydro) more sustainable.

But how exactly is it sustainable if we’re still burning diesel? 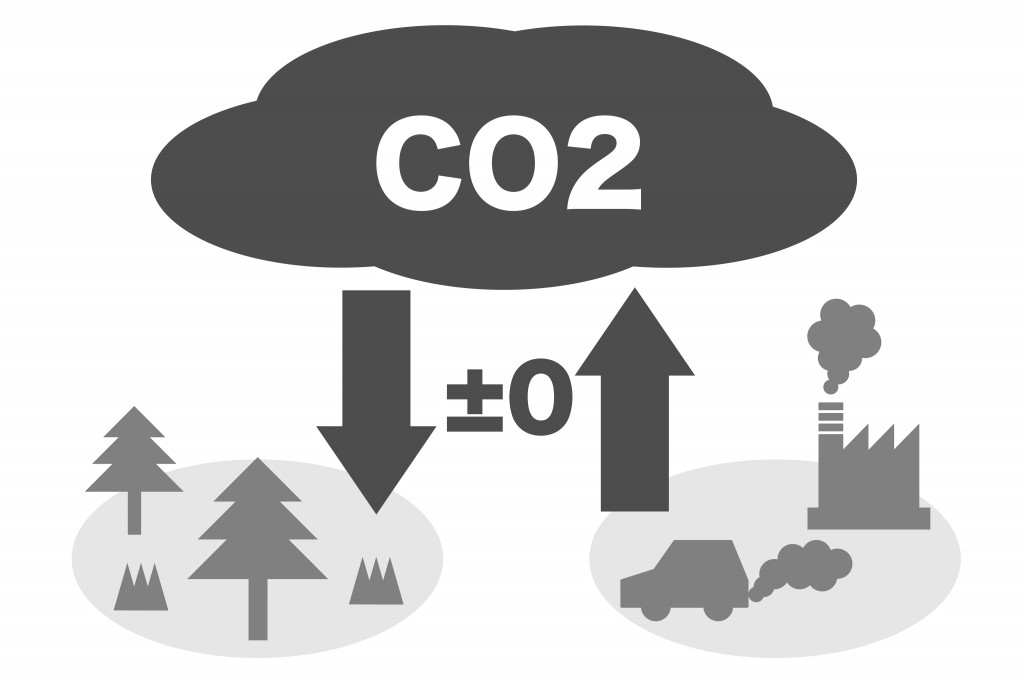 A great example of a carbon-neutral system. However, for this to be viable, the trees must absorb the same amount of CO2 as the factory releases. (Photo Credit : umaruchan4678/Shutterstock)

Biodiesels synthesized by algae will absorb CO2 from the atmosphere when the algae are being cultured. This would mean that the amount of carbon dioxide used when burning the fuel is the same amount that is offset while making it.

Biodiesel is possibly the largest area of impact that algae will have in the future, but that does not mean that the uses of algae are limited to biofuels.

Biofuels are only one of the many applications mentioned above. Macroalgae are already eaten around the world. Microalgae, on the other hand, are starting to be marketed worldwide as food supplements, because they have high concentrations of lipids, proteins and vitamins.

Various forms of Algae that are eaten across various cultures (Photo Credit : PegasuStudio/Shutterstock)

Microalgae can also be manipulated when they’re being grown. This can ensure that they contain essential or beneficial compounds in larger quantities. If we wanted these algae to contain more proteins, all we have to do is feed them more protein. The same is true for all sorts of compounds. Microalgae can also double their biomass very quickly. This would help create lots of food in short periods of time. All of these factors and more could help make algae and algal supplements the food of the future.

Many species of algae have shown potential in the medical industry. As explained earlier, they contain bioactive compounds, and some species of algae have antiviral compounds in them already. Algae can also be manipulated to create compounds that can be used for medical purposes. They can create chemicals for vaccines, antibodies and hormones. Nanoparticles in certain algae could possibly even treat cancer!

Producing compounds like these at large scales could have a major impact on the biomedical industry. Moreover, when the production of these compounds is scaled up, the costs of medicines could come down, making healthcare more affordable.

While we have discussed the future uses of algae, we still face problems today. While the potential is endless, it’s not entirely feasible. The cost of making these products is quite high. Not only that, but these products cannot be produced in high enough quantities to significantly affect their relevant markets. 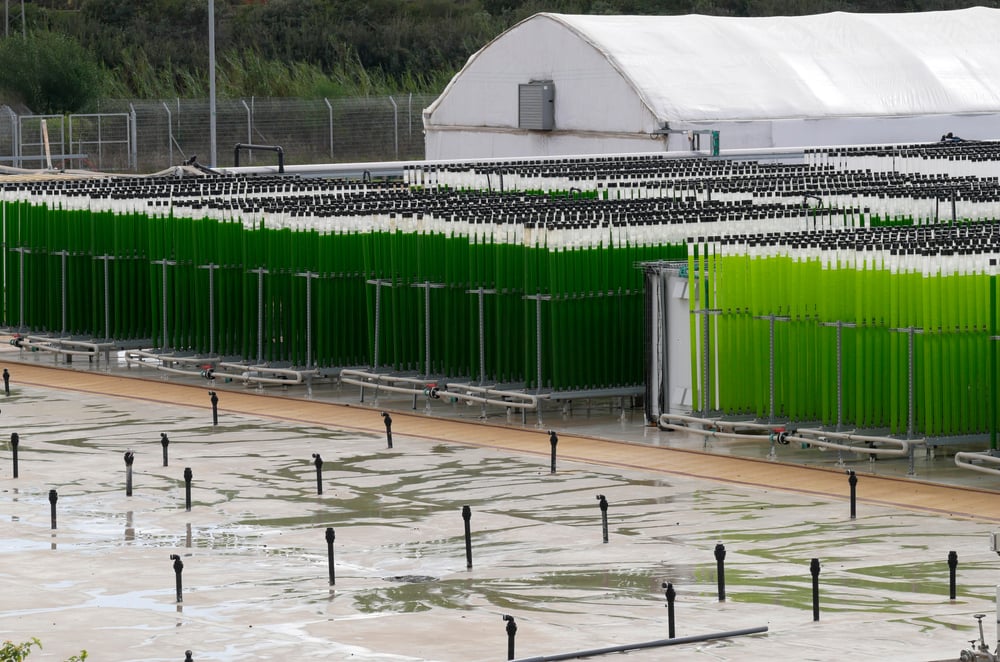 A farm that grows algae. This may look like a larg amounts, but it would take a lot more than this to match what the world needs (Photo Credit : Yosefer/Shutterstock)

Fortunately, these problems will soon be solved. Research and development are ongoing every day to drive us towards a brighter and more sustainable future—and algae might be a big part of it!