Glaciers are accumulations of snow and ice that flow under the influence of gravity and its weight. Glacial motion is a result of internal deformation and slippage of the base that occurs under different conditions.

Glaciers are fascinating landforms covering about 10% of our planet’s surface. Not only do they add to the beauty of the environment, but they also act as important geomorphic contributors. These storehouses of fresh water are interesting in their own unique way. It won’t be wrong to call them rivers of ice, because they flow much like rivers, but how can these masses of accumulated ice move? How can solid matter flow?

How Do Glaciers Form?

A glacier is a massive volume of snow and ice that travels slowly across land. Even though they appear enormous, glacier formation starts with tiny snowflakes. They are composed of 90% air. As snowflakes start to accumulate after consecutive snowfalls, they get bundled into grains. The burden of the snow on top bears down on the grains below, making them coarser and bigger. 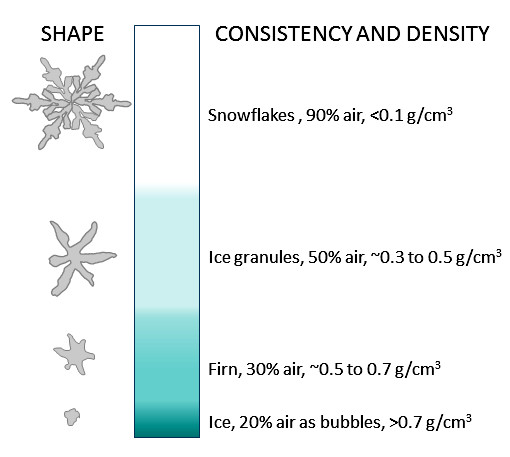 Stages involved in the making of glacial ice from snow

Perennial snow patches last through the end of summer in regions where winter snowfall exceeds summer snowmelt. The snow eventually becomes thicker, known as “firn,” after being crushed and compacted. The firn gradually transforms into a denser sheet of ice due to the weight of the accumulated snow over time.

The ice and snow start to move once they have accumulate enough weight. As flow is visible in a reoccurring snow patch, it is no longer just a collection of ice and snow, but a glacier!

What Are The Types Of Glaciers?

High latitudes create cold-based glaciers. Here the glacier’s ice temperature remains below zero all year. Because these glaciers remain permanently frozen to the bedrock, there isn’t much movement of the ice. Cold-based glaciers can be found in the Antarctic and Greenland.

Water is found throughout the ice mass of warm-based glaciers and serves as a lubricant. These glaciers are often seen among mountains at lesser latitudes. The sort of movement that occurs within the ice is influenced by the type of glacier.

How Do Glaciers Flow?

A glacier moves due to gravity and the weight of the glacier itself in the direction of the slope. Two mechanisms are involved—internal deformation and basal sliding. Before jumping into their details, it’s important to get familiar with the concept of “pressure melting point”.

Also Read: What Are The Different Types Of Landforms?

Cold-based glaciers flow primarily due to internal deformation. These glaciers barely move 1-2 cm daily, as they are frozen up to the ground. The glacier’s ice crystals align themselves with the direction in which the ice is moving. Because of internal stress, glacier ice can deform and slip past itself like a deck of cards.

Ice acts similarly to a rock, in that it is brittle at low pressures (about 50-100 m from the surface) and plastic at greater pressures deep in the glacier. A glacier’s uppermost ice moves with the basal ice as it flows. Under enough force, the bottom ice deforms (flows), while the top part is taken along through brittle deformation. Because of friction between the glacier’s base and the surface below it, the upper section of the glacier travels more quickly than the glacier’s base. 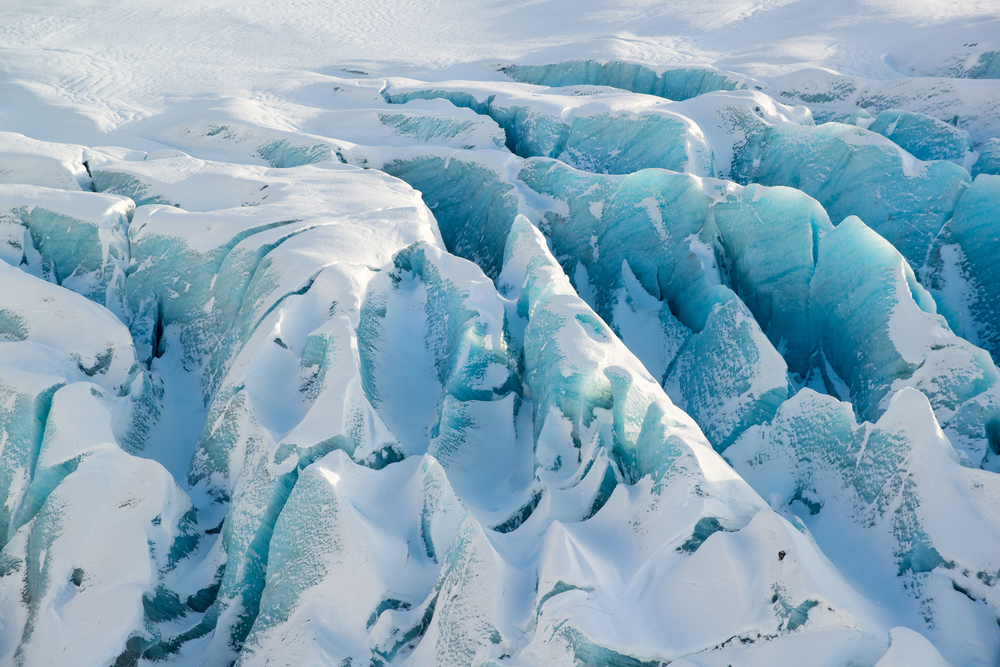 Crevasses result when the surface and base of the glacial profile move at different speeds (Photo Credit : Daria Medvedeva/Shutterstock)

Higher pressure on the uphill side of bigger obstacles in the way leads to more melting of glacial ice at the base. It moves across the barrier and then refreezes on the opposite side.

When the ice moves quickly enough, crevasses may form at the surface, as there is not much pressure and the surface layer has a tendency to crack.

How Does The Base Slide?

Up to 90% of the activity of warm-based glaciers is caused by basal sliding, which is practically nonexistent in cold-based glaciers. Through pressure and friction, glacier movement can increase the base ice’s temperature. The ice then melts, and the resulting water makes it easier for the ice to slide over its bed.

In particular, during warmer seasons, precipitation and meltwater from the glacier’s top sections can seep downwards and heat the glacier’s base to promote basal sliding. In areas with strong heat flow from volcanic activity, geothermal systems also add to the thawing at the foot of glaciers.

How Does Glacial Motion Affect Landforms?

Glaciers move enormous amounts of rock and silt, sculpting mountains and carving valleys through erosion and deposition. Glacial motion is responsible for a variety of landforms, such as moraines, valleys, fjords, cirques and many more.

The simplest site to witness a glacier’s movement in action is at its terminal edge. Glaciers will advance if more snow and ice are supplied than are lost due to melting, breaking, or evaporation. Glaciers will retreat if there is a net loss of snow and ice compared to a net gain. A glacier is “balanced” if both of these are equal. 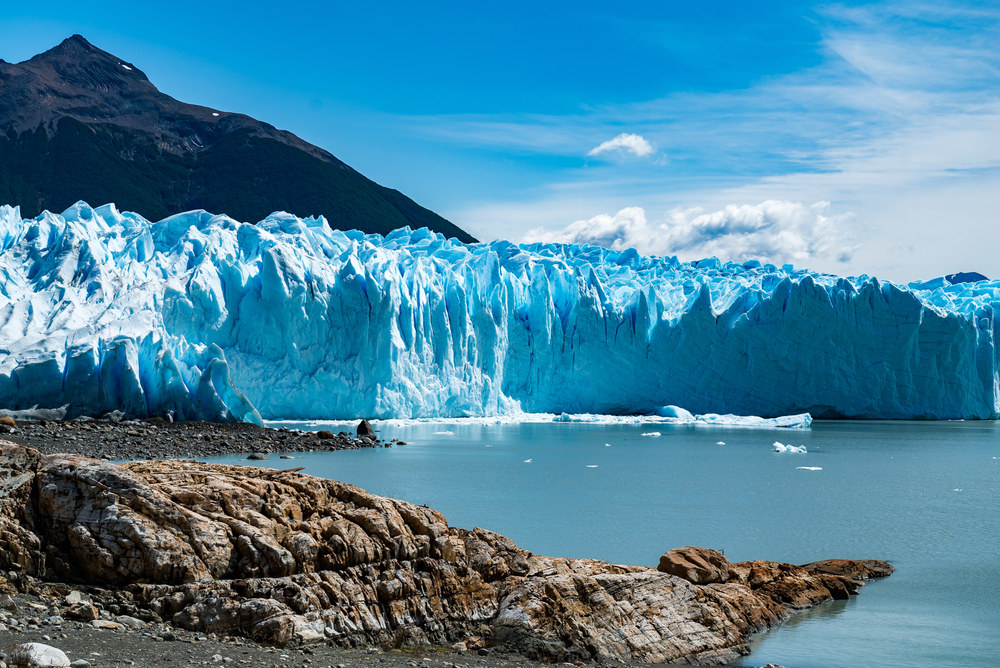 A striking indicator of global warming is the continuous disappearance of mountain glaciers. These are constantly retreating and melting much faster than they should. It is a major cause of concern, as the impact of human activity on glaciers is visible and very real! 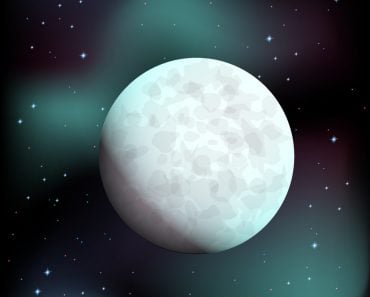 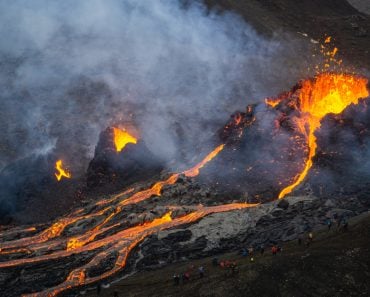