When you think of Siberia, what comes to mind? A thick, white blanket of snow lined with high conifers like this?

Well, if you asked our hunter-gatherer ancestors, the Neanderthals, they would tell you that Siberia was once overrun with lush plains of grasslands. This is referred to as the ‘mammoth steppe’.

However, the disappearance of large grazers like the woolly mammoth from these grasslands resulted in the snowy Arctic tundra that we see today. 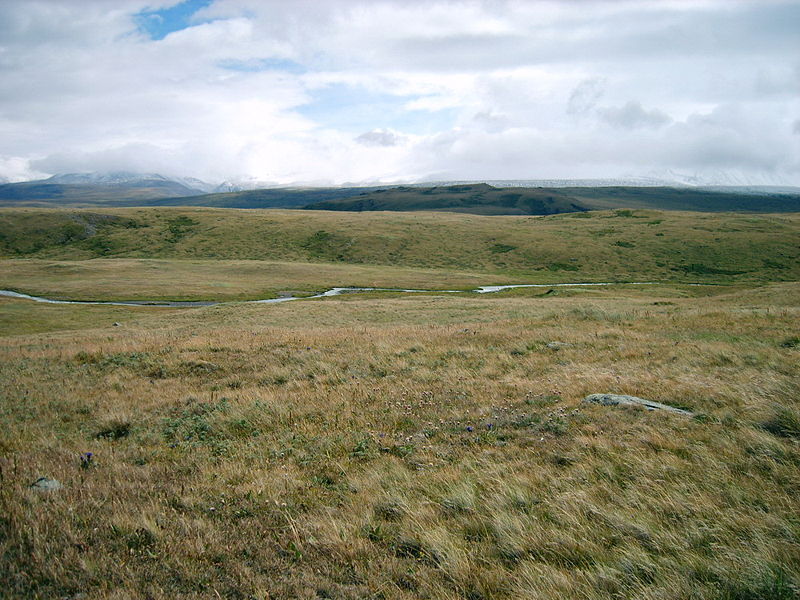 What Was The Mammoth Steppe?

During the Earth’s most recent and greatest Ice Age (the Pleistocene Epoch), the mammoth steppe was its largest ecosystem. Technically, you could call it the Grass Age! The mammoth steppe was a dry grassy plain that extended from the Arctic Islands to China and from Spain to Canada. The well-maintained grazing ecosystem was teeming with bison, reindeer, mammoths, wolves and tigers. Think of it as a very cold version of the African savanna. 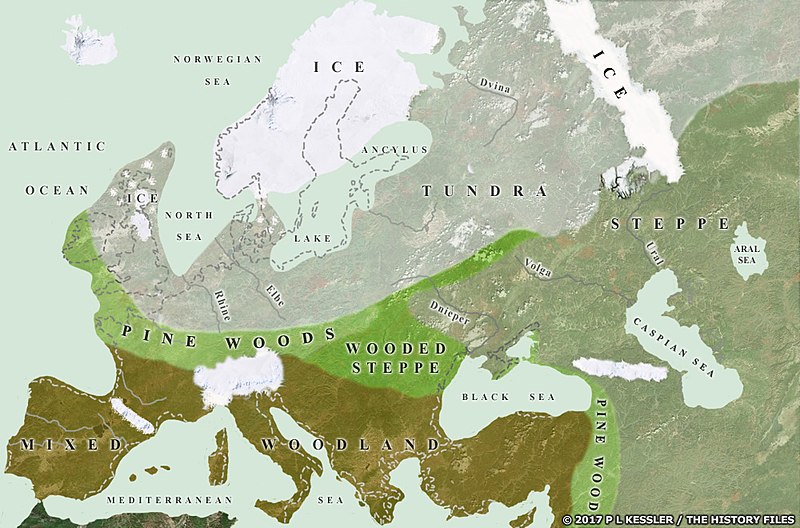 The mammoth steppe ecosystem was only partially dependent on the climate. The grazing herbivores maintained the pastures by trampling shrubs and moss, essentially making them nature’s very own lawnmowers. They also doubled as efficient gardeners by propagating seeds and fertilizing the landscape with their nutritious dung. Hence, even during the coldest period of the Ice Age, this ecosystem was able to sustain a huge population of large herbivores.

Yet, after 100,000 years of braving climatic changes, the mammoth steppe and its iconic residents vanished from the face of the Earth. Today, northern Siberia, Alaska and the Yukon (Canada) are the only places that even come close to the steppe ecosystem. Since these regions have survived our ongoing climatic changes, some researchers believe that the mammoth steppe ought to have survived the Pleistocene epoch as well.

Why and How Did The Mammoth Steppe Disappear?

The leading theory is that when the climate grew warmer at the end of the last Ice Age, approximately 14,500 years ago, humans finally ventured further north. Armed with their spears, they soon climbed their way to the top of the food chain. 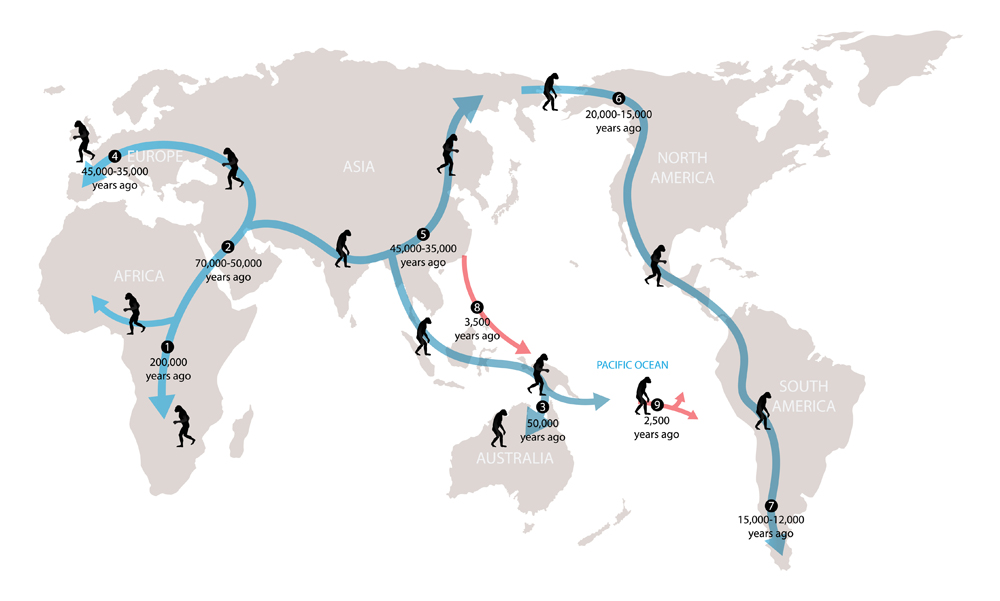 The unsuspecting animals were defenseless against these new predators. Soon, the herbivore population plummeted in the mammoth steppe, with several species going extinct. This was enough to set into motion a domino effect that culminated in a brand new ecosystem. Gigantic herbivores trample vegetation as they forage. Without their help, the grasses of the mammoth steppe simply could not compete with the evergreen shrubs, slow-growing mosses and larch trees of the Arctic tundra.

How Did The Disappearance of the Mammoth Steppe Affect The Ecosystem of The Earth?

Millions of acres of highly productive grasslands with fertile soil were replaced with slow-growing, low-productive vegetation. The remaining species, such as the mammoth and woolly rhinoceros, could not adapt to this new vegetation and were unable to survive the cold winters. 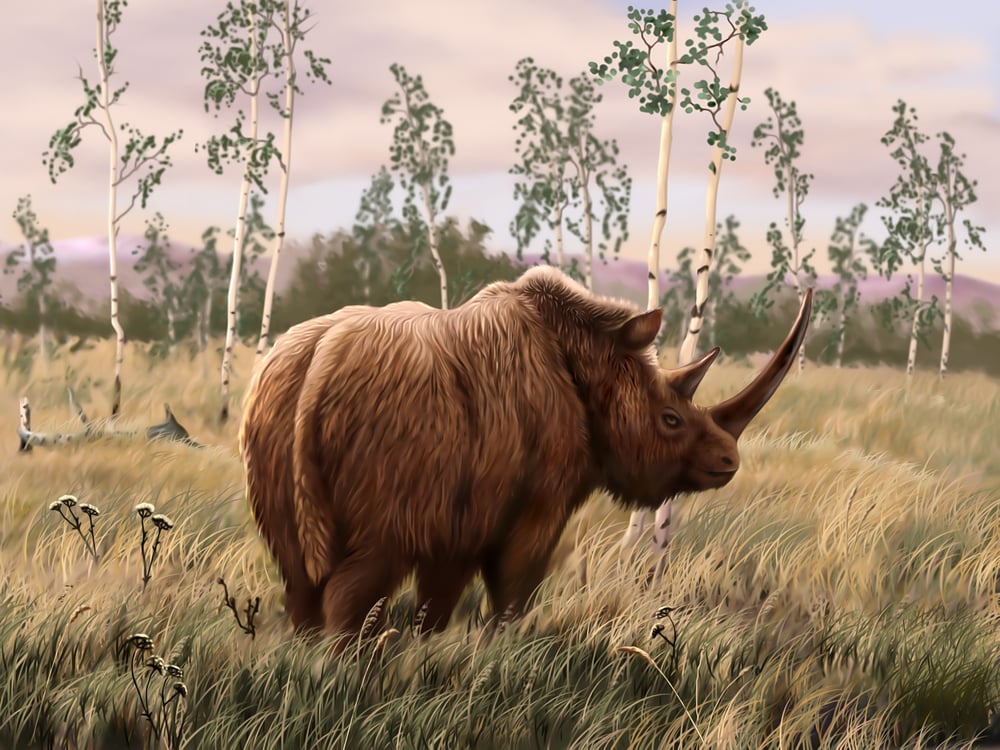 
The current animal population in the Arctic is at least 100 times lower than what it used to be, as the ecosystem can sustain only a limited number of animals. Over and above that, the ice melting in the Arctic due to climate change is causing large amounts of carbon to be released into the atmosphere. Scientists believe that restoring the grassland ecosystem in the Arctic can turn this trend around.

To explain the importance of this restoration, the Director of Russia’s Northeast Science Station, Sergei Zimov, founded Pleistocene Park in northern Siberia. He planned to bring back the grasslands by strategically reintroducing large herbivores to fenced areas inside the park. Currently, the park is spread over 20 square kilometers and is home to eight major herbivore species: reindeer, moose, bison, Yakutian horse, Kalmykian cow, muskoxen, yak and sheep. With the woolly mammoth de-extinction project underway, Zimov hopes to one day include them in the park too. There are no close living relatives or frozen remains of other extinct animals from the area. Such animals like scimitar cats are therefore lost forever. 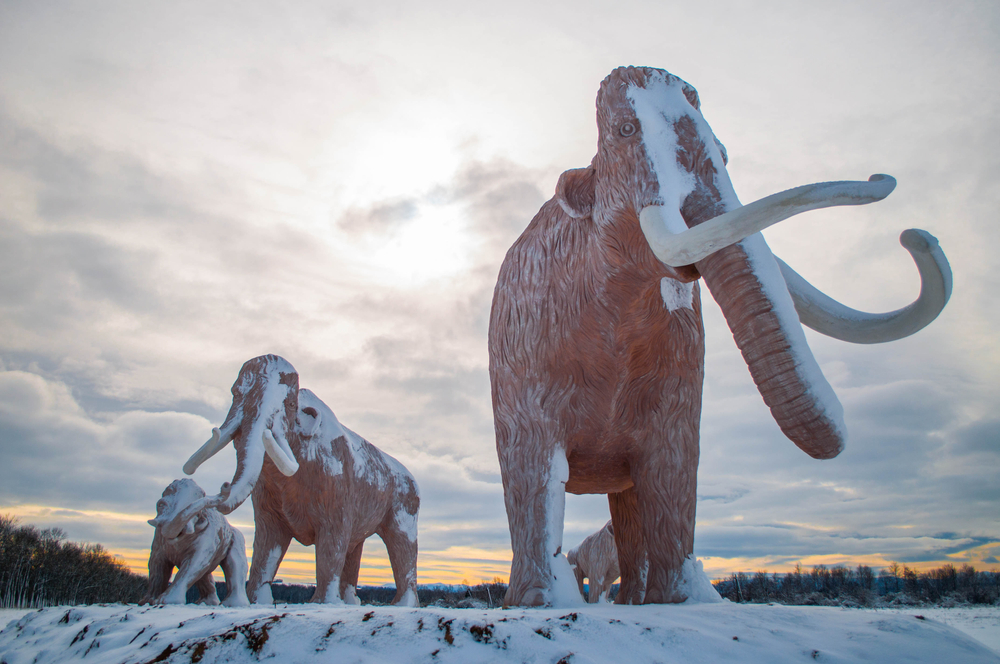 Zimov’s initiative has been largely successful, as the animals have significantly impacted the vegetation within the fenced areas inside Pleistocene Park during the 20 years of its existence. Grasses are now the primary vegetation in many fenced areas. Carbon deposition within the soil is on the rise and nutrient turnover rates are accelerating. His proof of concept showed that restoring the steppe ecosystem to this region can affect the global climate in three major ways:

1. Carbon Preservation: The permanently frozen regions (permafrost) of the Arctic are some of the largest carbon reservoirs on the planet. This means that large quantities of carbon in the form of organic matter have been trapped beneath the snow for tens of thousands of years.

In the summer, the soil absorbs heat, but is unable to radiate it back into the atmosphere due to the thick insulating layer of snow. The increase in soil temperature, when combined with the atmospheric rise in temperature, can melt the permafrost and release the trapped carbon. The release of all this carbon would be equivalent to burning all the world’s forests 2 ½ times.

The large herbivores of the steppe ecosystem prevented this by scraping away the snow in search of food and compacting the layer of snow by stomping on it. A net 4°C drop in soil temperature was recorded in regions with herbivores. 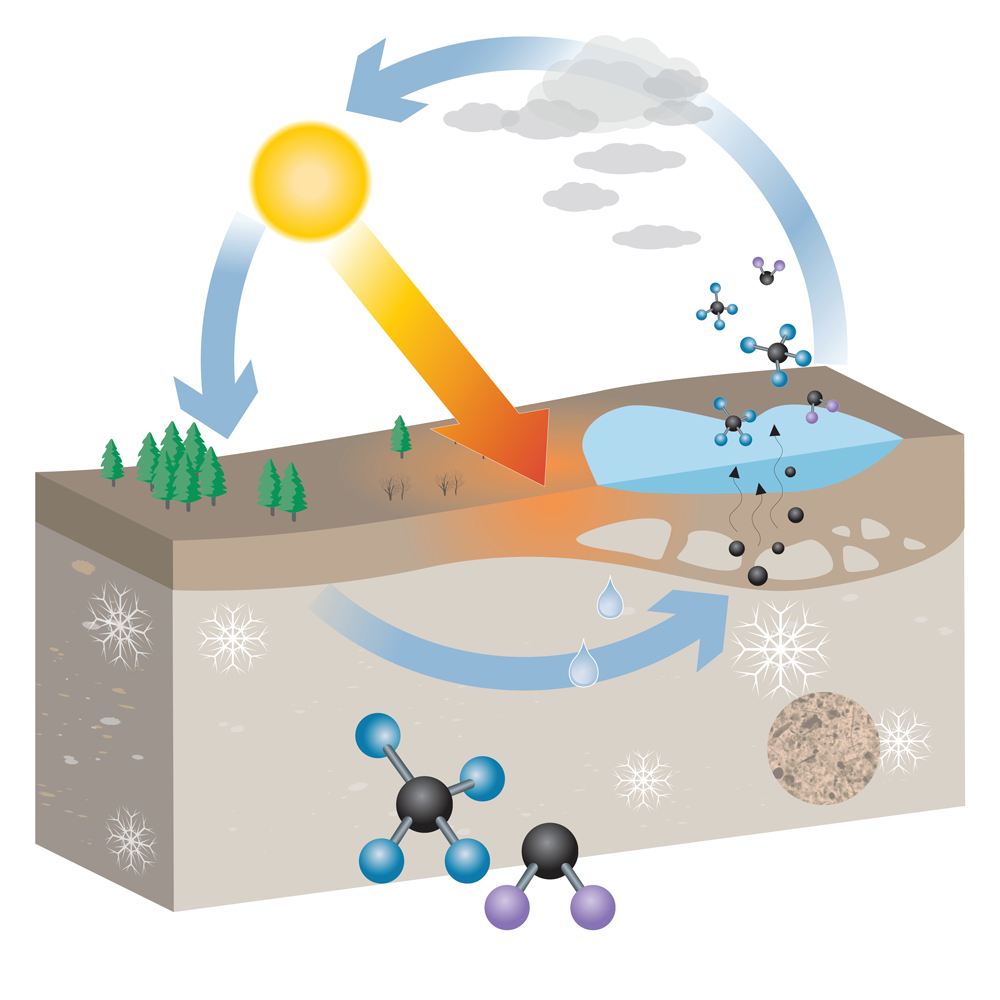 2. Carbon Storage: The deep roots of the mammoth steppe can store far more carbon than the mosses and shrubs of the tundra. An added advantage is that carbon stored in roots in the soil is not released during forest fires, which is always a risk with evergreen conifers. Over the years, efficient carbon sequestration by the grasses can reduce the levels of atmospheric CO2, which is a greenhouse gas.

3. Albedo Effect: Grasslands are lighter in color than the current mosses of the tundra. Lighter surfaces reflect a higher proportion of heat, keeping the surface cooler. In the summer months of April and May, this albedo effect is especially important. Dark tree stems absorb the sun’s heat, whereas grasses remain blanketed with white snow and reflect away most of the heat. 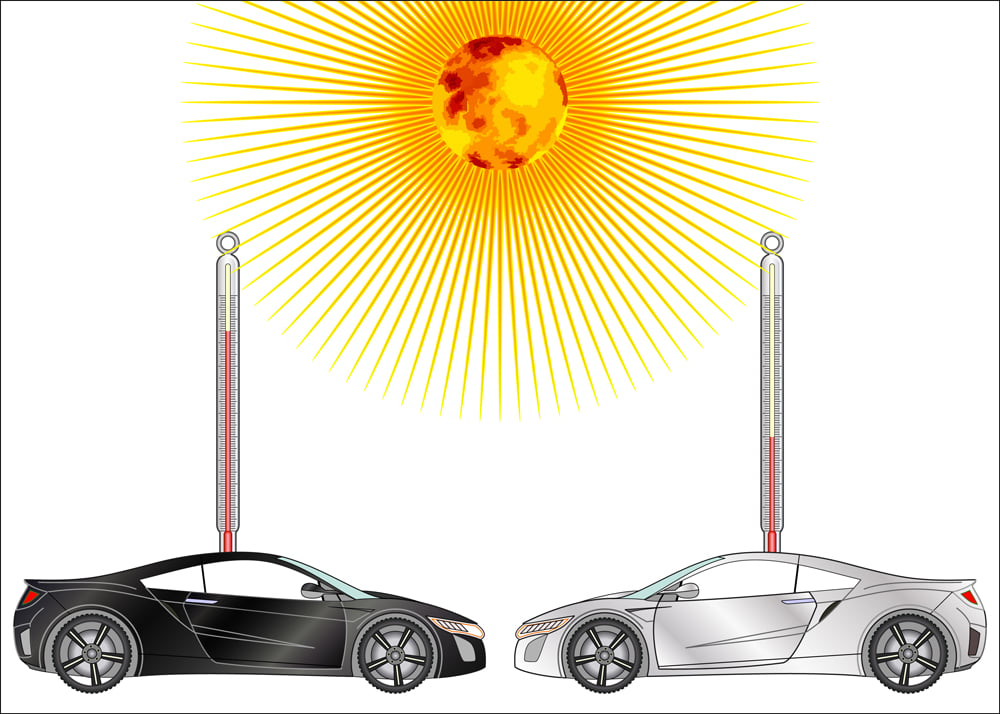 Albedo effect explained with a black car and a white car (Photo Credit : Fouad A. Saad/Shutterstock)

Even though a full-fledged grazing ecosystem has not been established in the Park, the progress achieved so far is quite promising. In the future, Pleistocene Park plans to expand the fenced-in area to cover the entire park and they will eventually introduce predators to the ecosystem.

Similar projects have been planned in other areas of Russia, along with locations in Alaska and Canada. With the enforcement of anti-poaching laws and sustainable hunting measures in these areas, any human impact on the ecosystem will be minimized. With time and dedication, the resurgence of the pasture ecosystem will not only preserve the permafrost, but also help combat global warming!